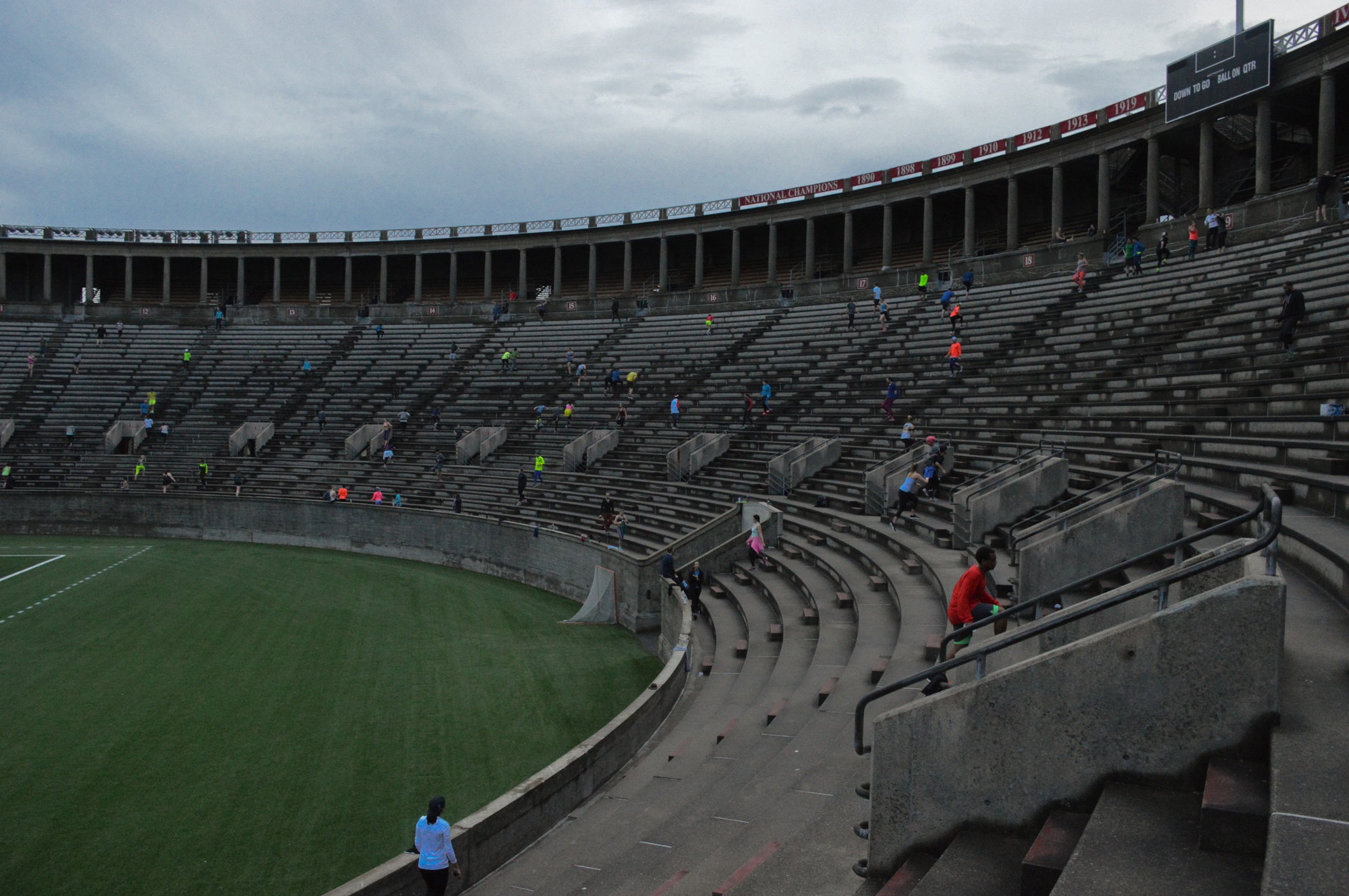 On Wednesday mornings, figures in brightly-colored athletic gear can be seen trekking up and down the steps of Harvard Stadium. Participants in the November Project aim to traverse the stadium by climbing the steps of each of its thirty-seven sections in turn. By Megan M. Ross

The November Project is a fitness movement that organizes early morning workouts each Monday, Wednesday, and Friday year-round
By Matthew J. Leifer and Alison W. Steinbach

Early each Wednesday morning, while the majority of Cambridge is still sound asleep, dozens of spandex-clad and energetic adults from around the Boston area converge on the Harvard Stadium. The first group arrives at 5:30 a.m., followed by another larger wave of people at 6:30 a.m. They mingle, hug, and prepare for a morning workout of steps, sweat, and spirit with the November Project.

The November Project is a fitness movement that organizes early morning workouts each Monday, Wednesday, and Friday year-round. Mondays switch locations, Wednesdays are stairs at the Harvard Stadium, and Fridays are hill repeats on Brookline’s Summit Avenue. 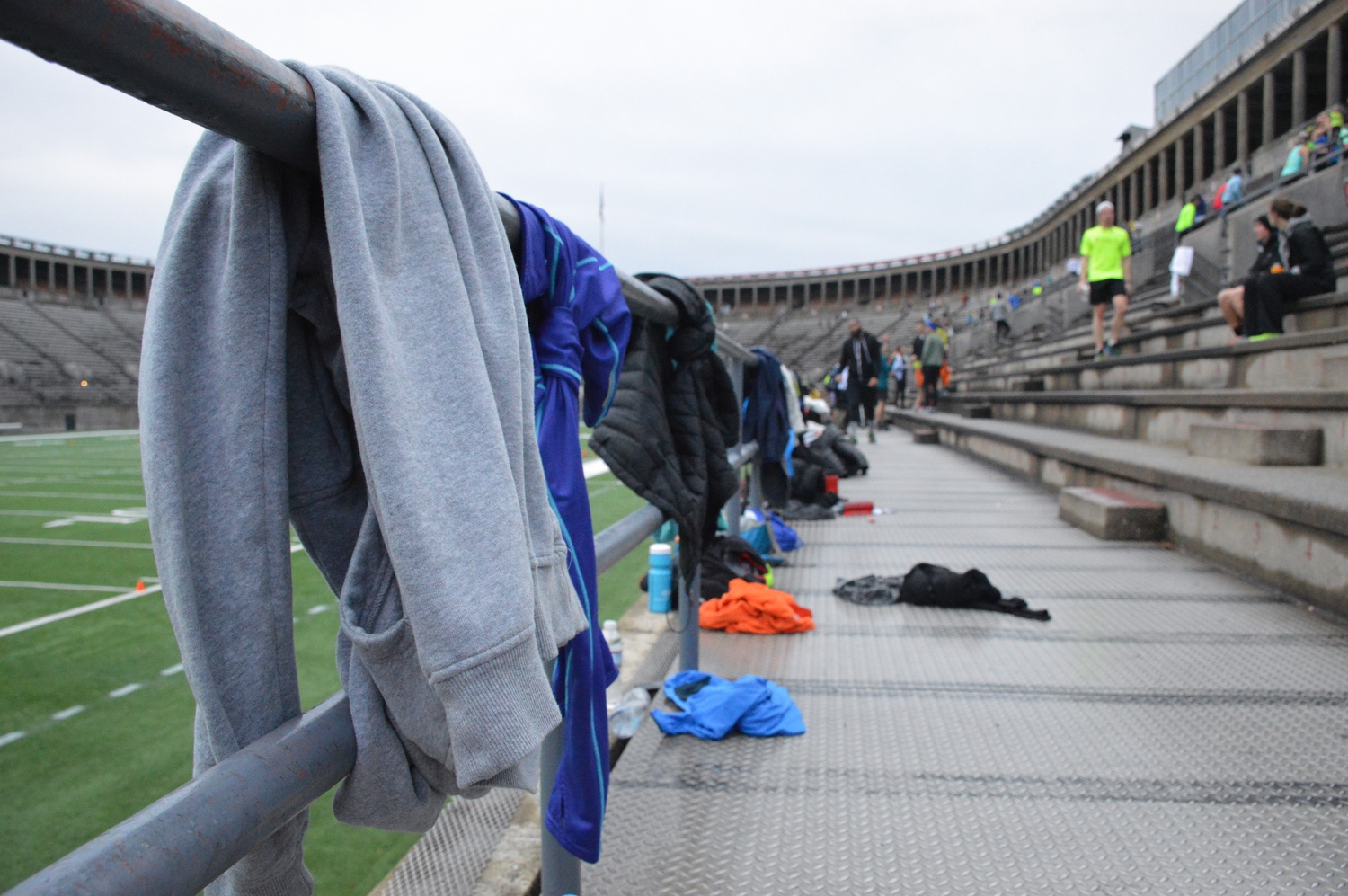 Sweaters, water bottles, and backpacks belonging to November Project participants line the railings at the foot of the stadium steps. By Megan M. Ross

On Wednesday mornings, marathon trainers, graduate students, and fitness novices alike run stairs at the Harvard Stadium, a workout that has been part of the November Project since its founding five years ago.

The November Project began—in November of 2011, as the name suggests—out of a casual pact between two former Northeastern rowers who found it increasingly challenging to stay motivated and healthy in the cold Boston winters. They promised to train together, first for a month.

Little did they know their workout routine would ultimately evolve into a global fitness experience with thousands of people meeting three times per week organized into “tribes” in 32 cities across the United States and around the world.

THE TRIBE IS BORN

In the fall of 2011, Bojan Mandaric approached his friend and former teammate Brogan Graham for help staying in shape through the cold winter months. Graham accepted the challenge and the two agreed to create a regular fitness routine. 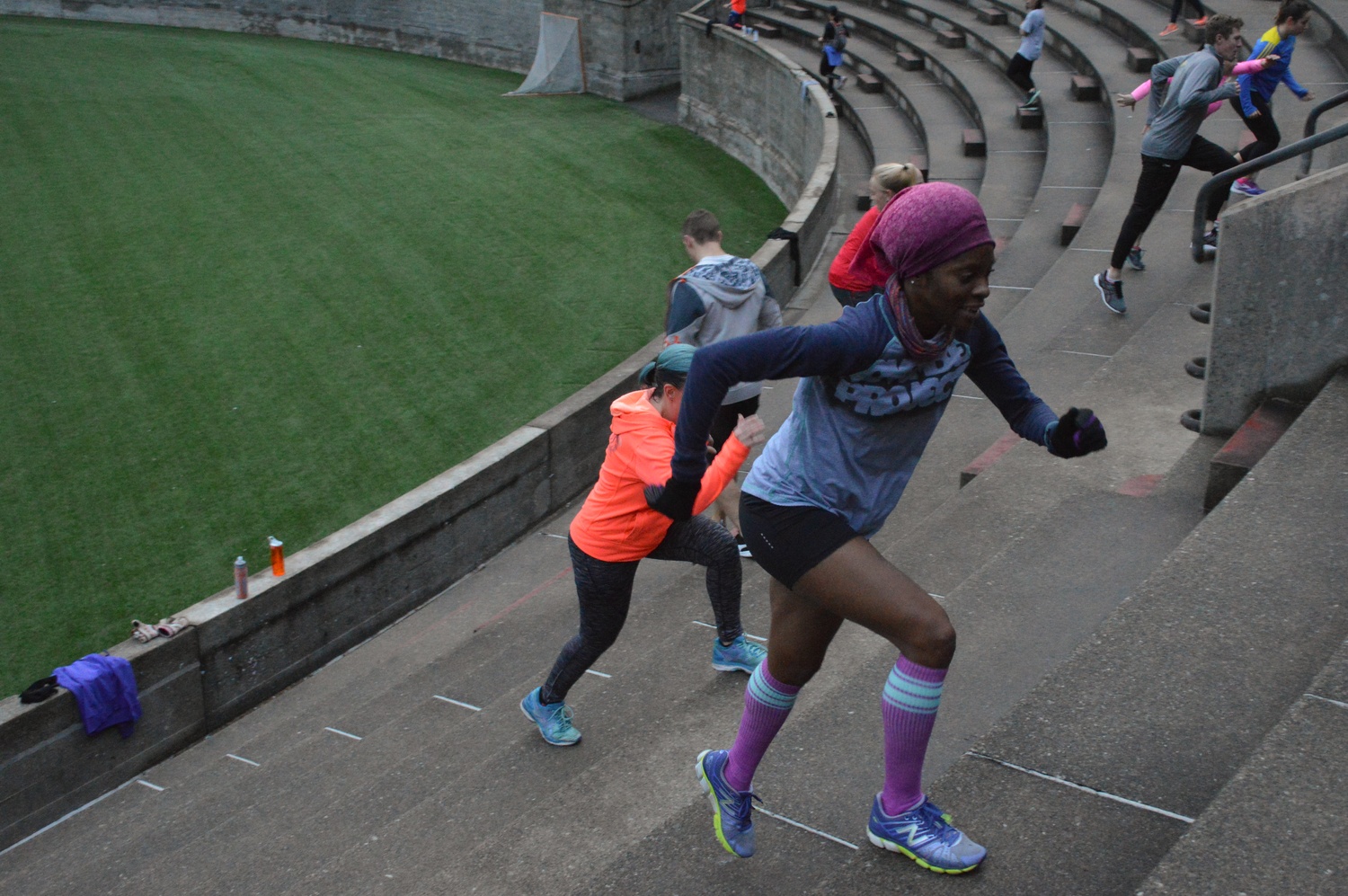 Cambridge resident Sheree Watson climbs up the steps of Harvard Stadium early on Wednesday morning. Watson has been participating in the November Project since September. By Megan M. Ross

As their workouts continued, the two decided to set a goal of running a five mile-race in February. Graham showed up to the race with two shirts spray painted “November Project” across the chests, the origin of what has now become the group’s “grassroots gear” that many members wear to workouts. But at that point, “November Project” had not expanded beyond the two friends, much less to what some humorously call an international fitness cult.

Mandaric described himself and Graham as “tall, gangly, massive 200-pound-plus dudes” who attracted quite a bit of attention at the road race. When asked what the November Project on the shirts meant, Mandaric said they fooled people into believing fabricated stories.

After that race, Mandaric and Graham decided to expand their workout routines to include others. Just like at their days at the boathouse, they found that exercising with others provided competition, camaraderie, and closer relationships.

The two started putting out casual announcements of their workouts, tweeting that the “November Project” was meeting at 6:30 on Wednesday mornings at the Harvard Stadium. Mandaric said, to his and Graham's surprise, one morning someone took their offer and showed up.

“Every week, more and more people kept showing up,” said Mandaric, and before long, the Boston “tribe” had grown quite large. 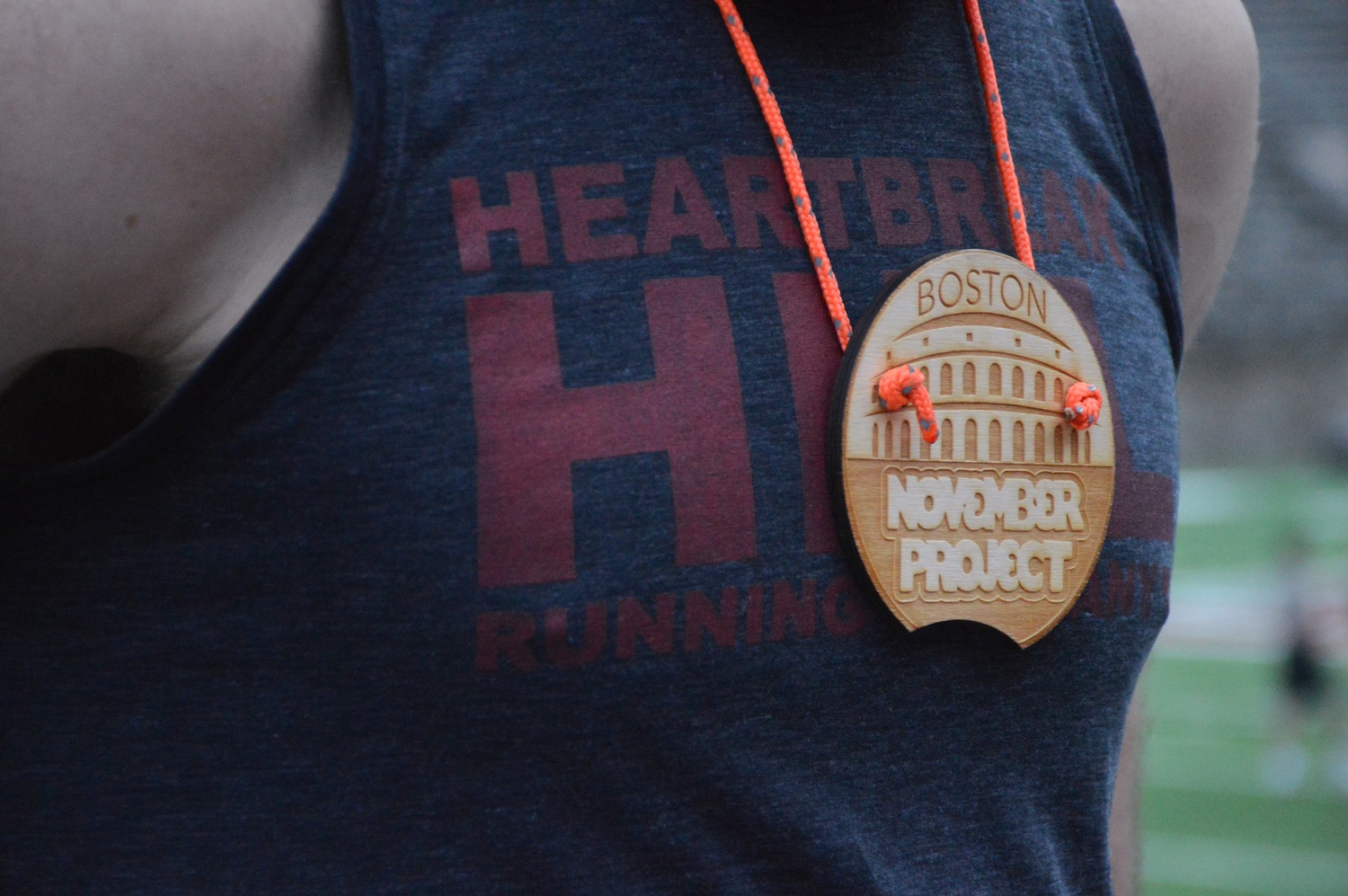 Conor Hayden wears one of twelve “NP High Five” medals. According to Hayden, November Project participants pass the medals to other members “as a way of recognizing someone who embodies what NP stands for. By Megan M. Ross

MORNINGS AT THE STADIUM

From the start, the Harvard Stadium has been integral to the November Project.

“The steps here at Harvard Stadium are relentless. They’re always hard, we say it all the time,” Christopher R. Payne, Boston November Project co-leader, said. “It never gets easy, you just get faster.”

The November Project leaders begin every stadium workout at the base of section 37 of the Harvard Stadium with a warmup to energize the group, often with some profanity-laden words of encouragement, hugs to strangers, and bounces up and down in unison. Then the warmup draws to a close and a line begins to form, ready to bound up the steps. 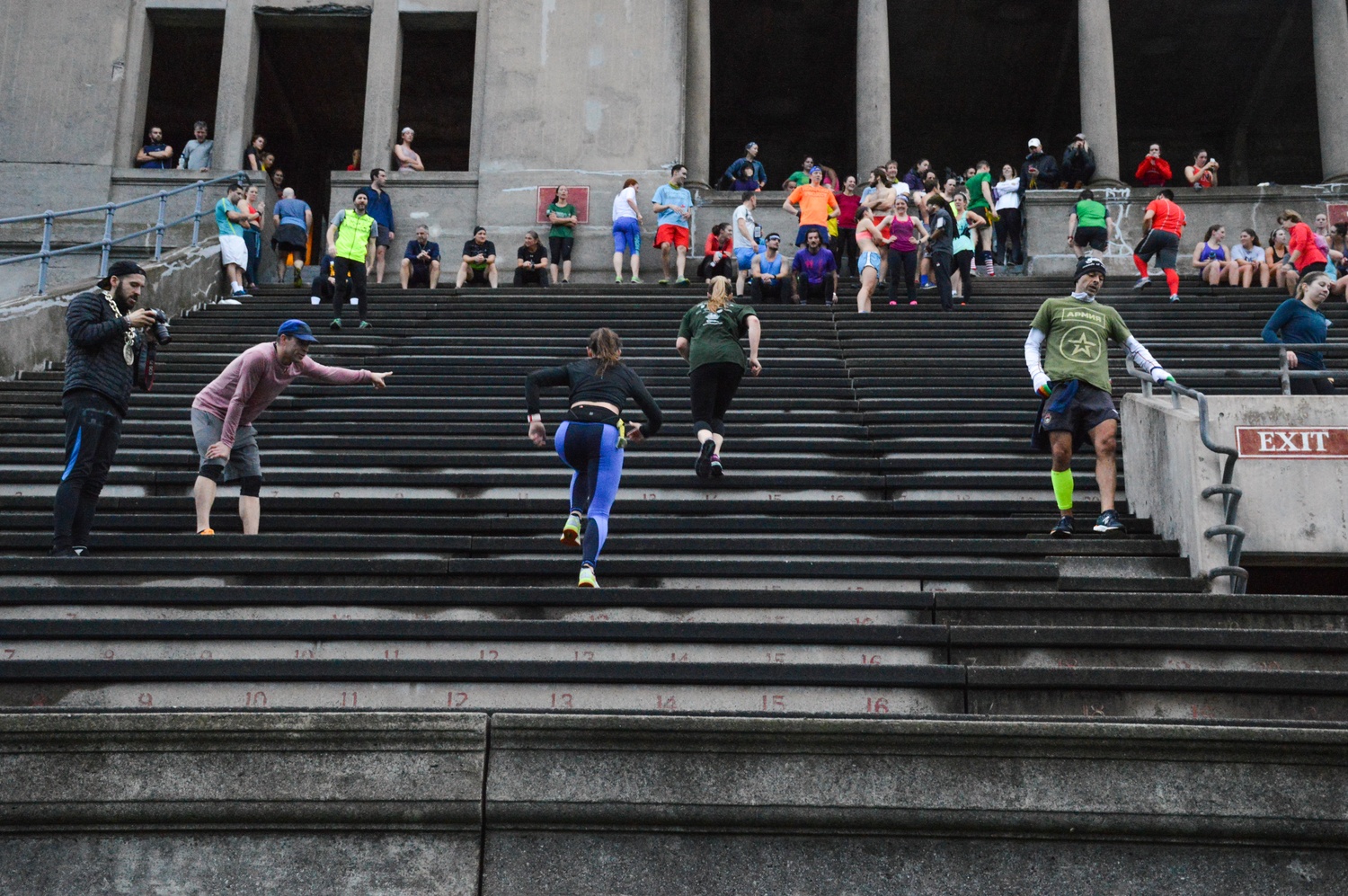 Organizers of the November Project cheer on runners as they approach the top of the last section of the stadium. By Megan M. Ross

The workout has been described as brutal, relentless, and for a select few, therapeutic. Starting in section 37, participants climb the 31 rows of seats. When participants reach the top, they touch the wall and head down the set of smaller steps sandwiched between sections 36 and 37. At the bottom, the climbers turn around and stare at the faded red and white 36 at the top of the next section. They repeat 36 more times. Within the next 30 minutes or so, participants will have conquered thousands of steps.

“There’s just something about doing a full tour in this building that is the most satisfying thing ever,” Payne said. “There’s definitely something magical about this place, and maybe it’s just that we’re here, and that all my friends are here.”

Brianna K. Beswick ’13, a former tutor in Mather House, got Mather students involved with the November Project. She said she enjoyed how the stadium workouts gave her a sense of accomplishment.

“Anytime you go, you always feel like you did something good for yourself and you really achieved something by 7 in the morning,” she said. “I was hooked on going and doing it with other people.”

While the opportunities for intensive exercise initially bring many people to the November Project, participants said the camaraderie it fosters keeps them coming back year in and year out.

Joanne L. Koong ’17, a student in Mather House who joined the November Project this fall, said she felt her senior year had been transformed by the people she found there.

“I’m definitely going to miss it when I graduate… I wish more of these communities existed at Harvard and in life,” she said. 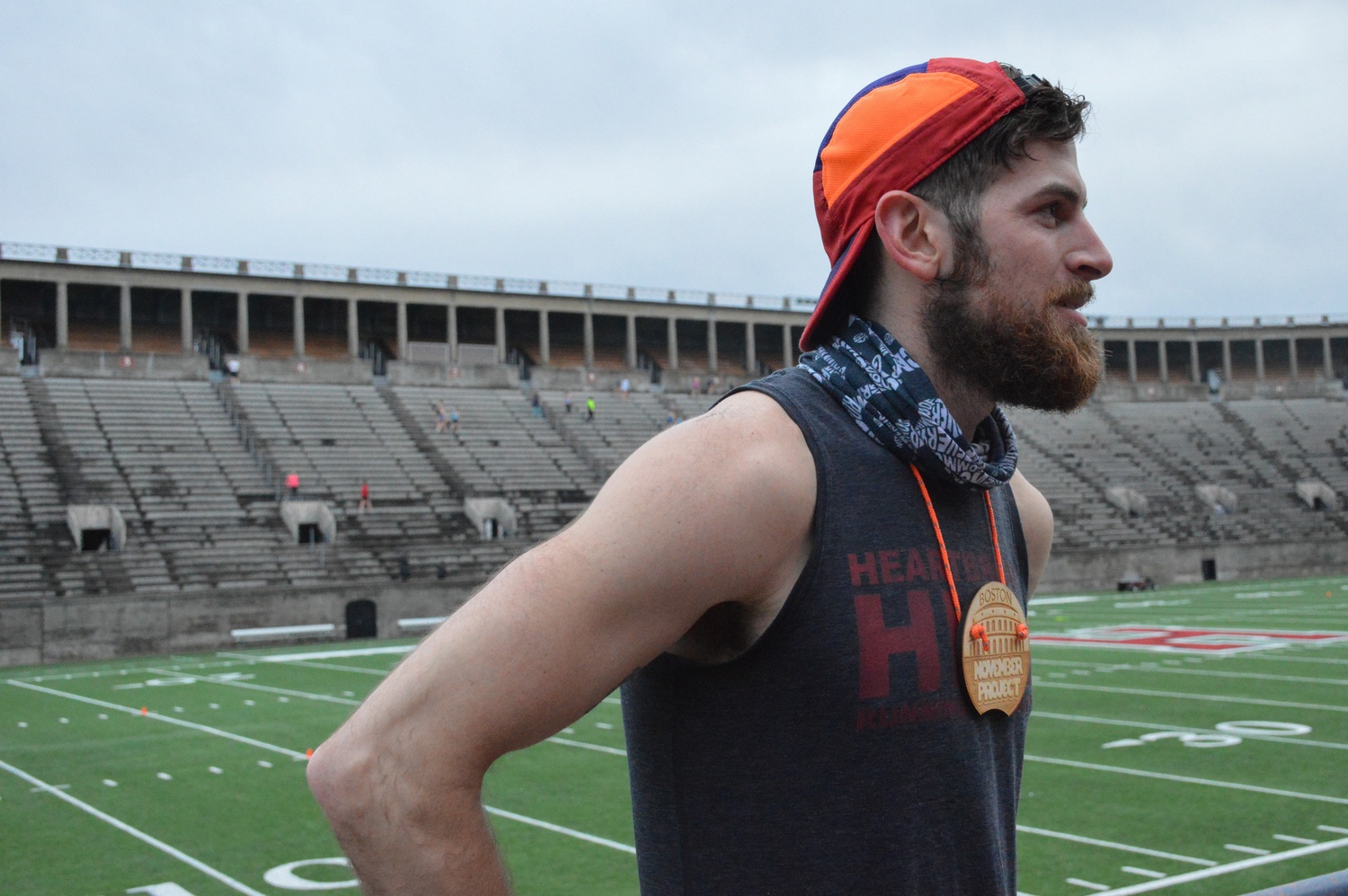 Conor Hayden, a Cambridge resident, has been participating in the November Project for three and a half years. By Megan M. Ross

Conor Hayden, a Cambridge resident, highlighted the openness and accessibility of the November Project.

“It’s totally free and everybody is welcome. I would recommend it to everybody, it’s just a great way to meet people and just do something ridiculous before work,” he said.

Mandaric said his most memorable morning at the Stadium was the Wednesday after the 2013 Boston Marathon bombing.

“A lot of people came to the workout, some just to put in a workout as any other Wednesday. Some people were just bawling their faces off. They didn’t come to workout, they just came to kinda like share the emotions with someone else, knowing that they were not the only one that was affected,” he said.

“That moment was the time when we said, ‘alright, this is not about us anymore, we can’t really tear it down anymore, because what we created is important to so many people.”

The leaders said they see the interpersonal benefits as even more important than exercise.

“The whole fitness aspect of it, to me, is like an added bonus,” Payne said. “It’s a community first, and then all of a sudden you get fit by accident.”

November Project workouts are free and open to anyone. Mandaric and Graham said they began by designing workouts where the fastest and slowest people would all be able to participate and get tired, but not get too spread out.

“Having that wide range of athletes, your fastest and the slowest are still sharing kinda the same battlefield, but you’re pushing yourself to do the best that you can,” Mandaric said.

Although the November Project has already spread to over 30 cities around the world, the Project’s leaders said they hope to see it expand further. 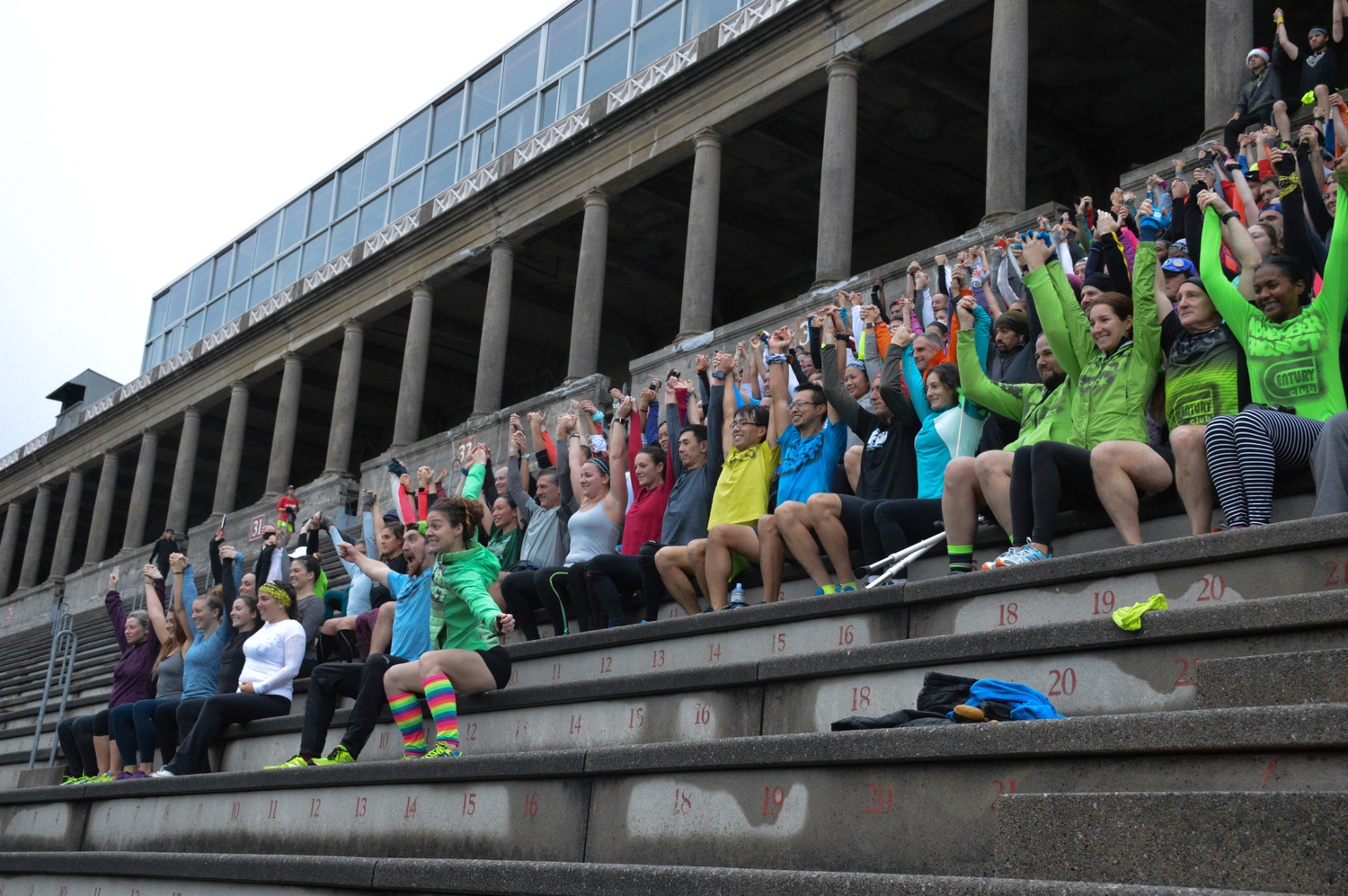 Chris R. Payne and Emily Saul lead in the November Project pose for a group photo at the end of Wednesday's run. By Megan M. Ross

“If the world were a place where every city had November Project, the world would be a lot better place. I would want to live in that world,” Boston November Project co-leader Emily Saul said. “I’m all for building these kinds of communities within cities that allow people to feel connected and to keep moving throughout the year and to feel like they’re inspired and doing something that feels good in life.”