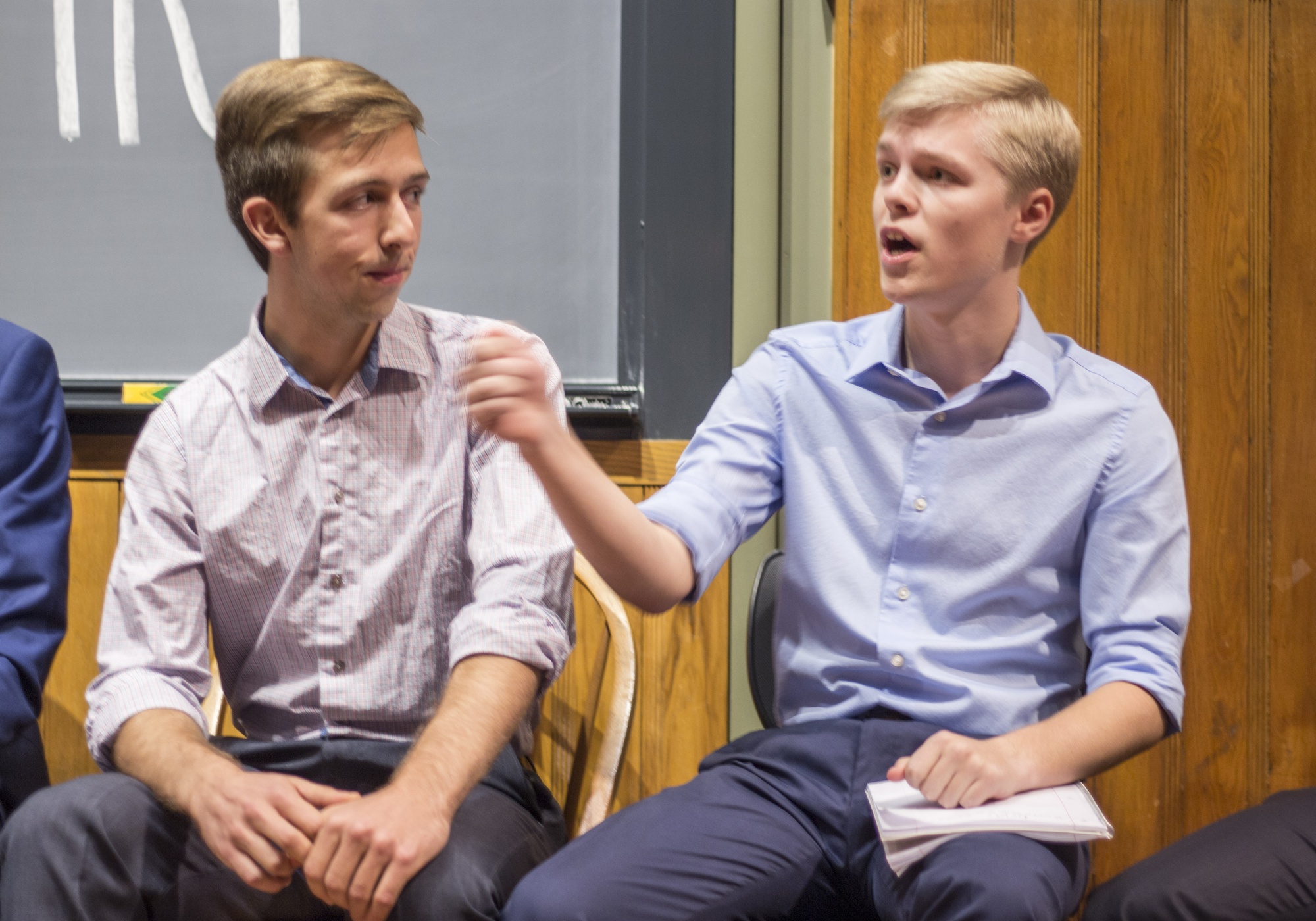 Scott Ely ’18 and Evan M. Bonsall ’19 say they are no strangers to the struggles many Harvard students face and are presenting themselves as leaders that can affect true change. The candidates, who have both served on the UC since their freshman year, are campaigning on a platform of elevating student voices and making resources in education, sexual assault, and mental health more accessible.

Both hailing from Michigan, Ely and Bonsall said they have much in common. The two have developed a close bond serving together on the UC’s Education Committee, which deals with issues of undergraduate education at Harvard. Ely is the committee’s current chair and Bonsall is a vice chair.

Under their leadership, the committee has been involved in advocating for a Latinx studies secondary, reintroducing the American Sign Language class, and shaping the new General Education program. The committee also started a UC partnership with Harvard Business School to promote the online platform HBX and the HBS Wintersession program.

Ely is the longest serving committee chair currently on the Council, and Bonsall also serves as one of two co-directors of the Student-Faculty Committees, which allows students to work alongside faculty to shape and implement campus-wide policies.

“The one thing that impressed me about them more than almost anyone else on the UC is their commitment to civic duty,” said Neel Mehta ’18, a UC representative on the Education Committee. “They have really worked harder than anyone and given more results than anyone.”

The duo are running under the motto “Let’s start now,” portraying themselves as candidates who are eager to incorporate student voices and oriented toward action on campus issues. Ely and Bonsall’s platform revolves around four main points: making student voices heard, sexual assault prevention, financial accessibility, and mental health care.

A Voice for Harvard

Both Ely and Bonsall said they believe not all student voices are being heard on campus—an issue they said was exemplified by the University’s May announcement of sanctions on members of unrecognized single-gender social organizations.

Under the policy, which will come into effect starting with next year’s class of 2021, students who join these organizations will be barred from holding athletic captaincies and receiving fellowships like the Marshall and the Rhodes. The administration has held meetings with undergraduate and graduate leaders of these organizations and town halls about the sanctions. The policy is currently being reviewed by an implementation committee comprised of faculty, staff, and undergraduates.

Bonsall and Ely said they believe students were insufficiently involved in the drafting on the sanctions.

“In this case it seems like they’ve decided to beg for forgiveness rather than ask for permission or advice,” Bonsall said.

The pair said they have had conversations with members of sororities and want to make sure that the University recognizes the benefits students say they get from participating in certain unrecognized single-gender groups. Recently, Ely helped co-write a referendum question currently on the UC ballot, asking students to vote on whether the College should repeal the sanctions.

“We’re going to take a strong stance and stand up for women’s groups, Greek organizations, these groups that provide great networks for students on this campus that are just a great resource and support community for all of them,” Ely said.

Besides the issue of sanctions, Ely and Bonsall hope to allow all voices of Harvard to be heard by creating UC caucuses that would represent historically underrepresented groups at Harvard such as black students and first-generation students.

Another issue Ely and Bonsall believe is pressing for Harvard is preventing sexual assault, which Bonsall called a “moral imperative.” Both said they felt disturbed by a report released by the sexual assault prevention task force earlier this year, which detailed the prevalence of sexual misconduct on campus.

“I remember receiving the email, sitting in Adams courtyard,” Ely said. “I was sitting there in shock reading all 40 pages of the report of the horrors that had gone on at this university and being driven to do something about it.”

As outlined on their published platform, the two are working to provide training from Consent Advocates and Relationship Educators within the 12 undergraduate Houses and have talked to OSAPR to provide more accessible support for sexual assault victims.

Ely and Bonsall allege the Office of Sexual Assault Prevention and Response is understaffed and that the average wait time for walk-in meetings is excessively long.

OSAPR Director Alicia Oeser wrote in an emailed statement that the office “is continuously working with the University to… find ways to better serve the Harvard community and evaluate any necessary changes to the department’s organization and structure.”

Bonsall has been involved in the UC Finance Committee’s initiative to require leaders of student organizations receiving large amounts of UC funding to undergo sexual assault training. The two plan to extend the training to the entire student body with the aim of ensuring that students can act against inappropriate activity they may see around them.

In addition, they said they hope to double the Grant for an Open Harvard College, which allocates $30,000 for initiatives that address designated “compelling interests,” including sexual assault and harassment.

Ely and Bonsall also see a lack of mental health resources as a pressing issue on campus, especially given what they characterize as Harvard’s high-stress environment.

To address this issue, they plan to improve resources by better publicizing mental health resources, making sure peer counsellors receive more funding, and providing more channels for students to give feedback on mental health services.

Currently, Ely and Bonsall are involved in planning a pilot program to have members of Counseling and Mental Health Services become more involved in events in each House. The initiative is set to start next semester and complements OSAPR’s current CARE tutor system in the Houses.

Bonsall and Ely also said they plan to tackle financial and educational accessibility at Harvard, a topic they believe has not been addressed sufficiently by the current Council. Both Ely and Bonsall are the first from their high schools to attend Harvard, and Bonsall is a first-generation college student. They said their backgrounds allow them to best address issues such as the costs that come with attending Harvard.

As a student on financial aid with a work requirement, Bonsall cites his high textbook costs as a struggle for himself and many others. According to Bonsall, this personal experience was what drove him to become involved in the student government at Harvard.

“The last generation of Harvard students, student leaders, and administrators made it possible for anybody with the ability and inclination to get in,” Bonsall said. “Now, they need to make it possible for everybody to have equal opportunity to take advantage of everything Harvard offers. That’s the generational task for us.”

As part of an Education Committee initiative, Ely and Bonsall said have already reached out to Harvard Student Agencies about starting a student-run book exchange that would allow students to sell and buy books at an affordable price.

According to Ely, their goal is to allow all students to “fit in” and “take advantage of every opportunity that exists here.”

Outside of the Council, both Ely and Bonsall are both active in student groups. Ely, an economics concentrator, is a member of the Institute of Politics and is also involved in Harvard College Faith in Action and the Christian a capella group Under Construction.

“Scott has amazing character. He is very kind, a good listener and really gets stuff done,” said Molly L. Richmond ’18, who knows Ely from both HCFA and Under Construction. “He has a strong Christian faith and that definitely impacts and influences how he lives in the world.”

Bonsall, a prospective government concentrator, is an active member of the Harvard College Democrats and writes for the Harvard Political Review. Additionally, he works as an usher for the John F. Kennedy, Jr. Forum.

No ticket with a sophomore has won a UC presidential election in nine years. However, Bonsall said his track record on the Council makes him qualified for the position.

“Experience is no guarantee of wisdom or insight,” Bonsall said when questioned at the “Crimson Crossfire” debate Friday evening. “Last year as a freshman I was able to be very active on lots of issues relating to freshman life.”

As Freshman Representative for Elm Yard, Bonsall was part of the group of freshmen that successfully pushed for a laundry room in Matthews Hall, printers in every freshman dorm, and an extended and expanded Brain Break.

“We want to be the ticket that offers the experience and has the bandwidth to make what we want happen,” Ely said in their closing statement at the debate. “Let’s start now.”