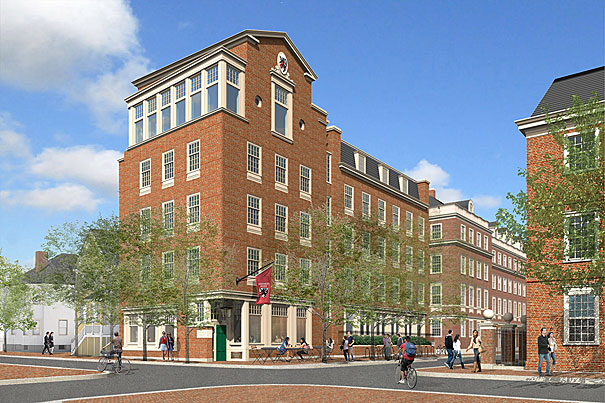 The five-story addition to Winthrop House, previously dubbed “Winthrop East,” will be named in honor of longtime Harvard donor Robert M. Beren ’47, who gave an undisclosed sum toward the College’s House renewal project.

Plans for the new hall, which will eliminate the need for overflow housing for Winthrop residents, were released last February. At the time, the project featured a contemporary building design that departed from Winthrop’s neo-Georgian style, but updated plans released in November returned to the colonial, brick facade that characterizes many of Harvard’s buildings. Those revised plans also included a significantly larger fitness room, a multi-purpose arts and design room, and a two-story grille and student center.

By Courtesy of Beyer Blinder Belle

“Bob Beren’s gift is extraordinarily special to us because Winthrop’s newest building is named after a Winthropian,” Winthrop House Masters Ronald S. Sullivan Jr. and Stephanie Robinson wrote in an email. “His generosity is a tangible expression of his love for Winthrop and his warm memories as an undergraduate here.”

Sullivan and Robinson wrote that the building’s plans are “substantially the same” compared to those released in November.

Beren Hall will be the fourth in a series of ongoing House renewal projects, following the renovations of Quincy House’s Stone Hall, Leverett House’s McKinlock Hall, and, most recently, Dunster House. Undergraduate House renewal is a priority of the $2.5 billion Faculty of Arts and Sciences campaign but, with less than half of the $400 million target raised as of September, it has struggled comparatively to gather as much fundraising momentum as other campaign goals.

Construction on the new hall is scheduled to start this summer. The next house renewal project will be a renovation of Lowell House starting in summer 2017.

“All of Winthrop will be able to come home,” Sullivan and Robinson wrote. “We will no longer house students in DeWolfe once Beren Hall is online.”