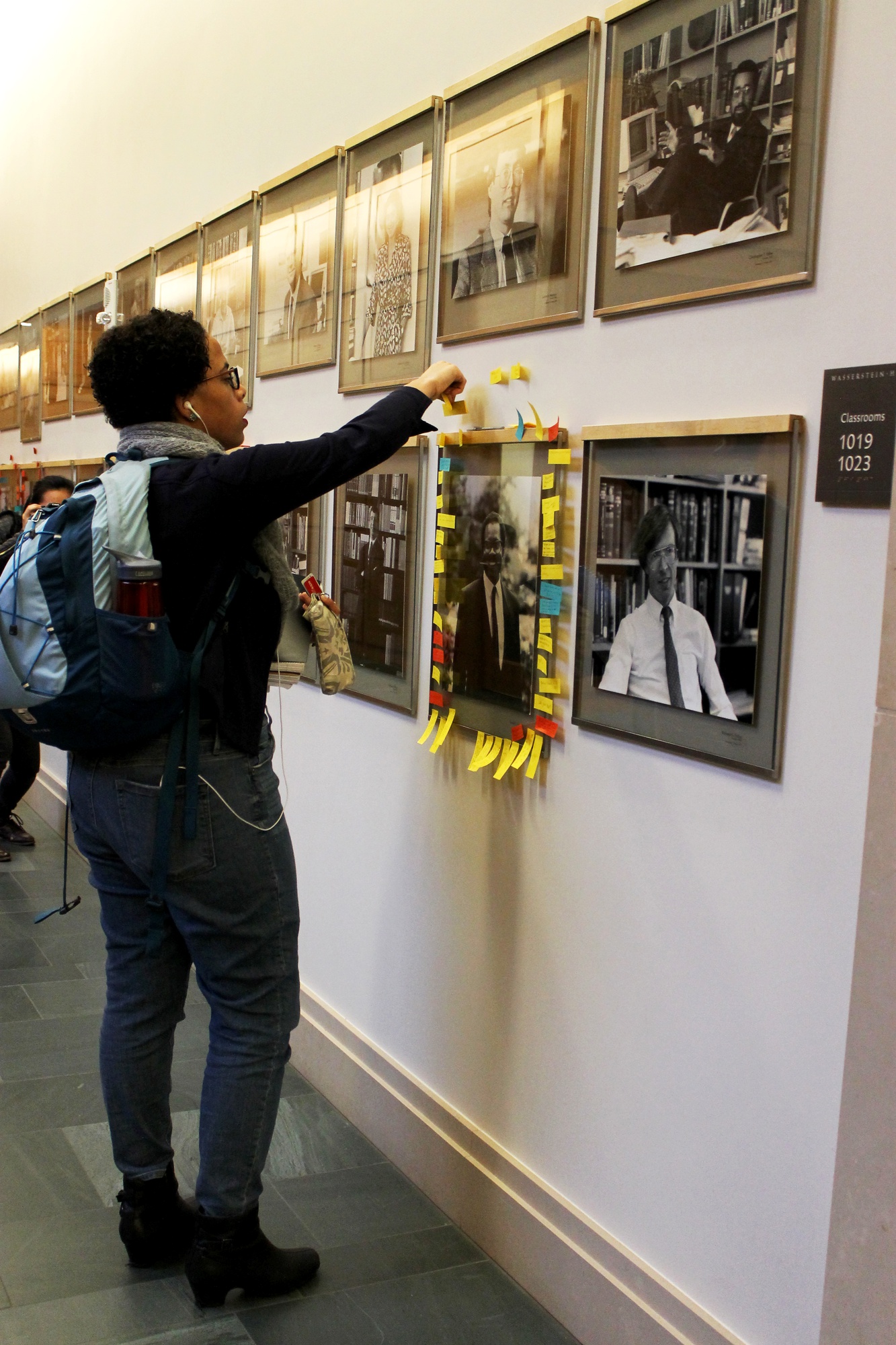 Tori Anderson, a third-year Law School student, shows her support by adding a sticky note to the portrait of a black Law School professor after black tape was found covering the photos. Anderson said, "This [the post-its] shows the outpouring of support for the faculty. I wish we had a greater and more robust response from the administration and a greater focus on creating, not only community inclusion, but institutional inclusion."
By Andrew M. Duehren, Crimson Staff Writer

Facing a group of expectant students in a campus lecture hall on Monday, Harvard Law School Dean Martha L. Minow did her best to mollify students who have called on her to improve campus race relations, demands that intensified after a racially-charged incident shook the school two weeks ago.

As several hundred students crowded Milstein East Hall, just steps from where black tape was recently placed over the portraits of black professors in what some are calling a hate crime, Minow presented a series of proposals she hopes will make the school more diverse and welcoming for minority students. 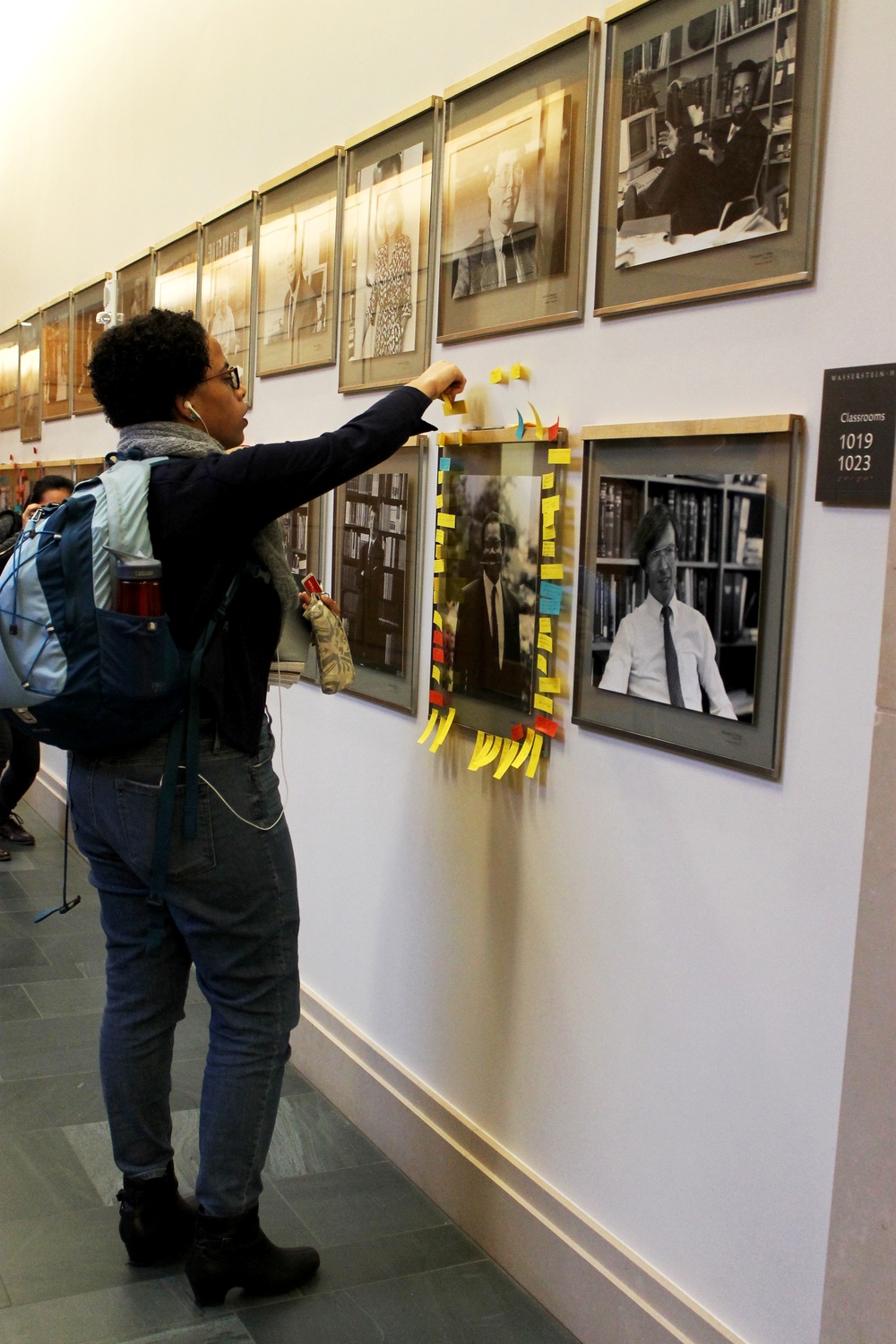 Tori Anderson, a third-year Law School student, shows her support by adding a sticky note to the portrait of a black Law School professor after black tape was found covering the photos. By Jennifer Y Yao

“This is a time for serious challenge and serious action,” Minow said in prepared remarks. “It’s a time when we need your talents and commitments more than ever. I called this meeting to discuss efforts underway at Harvard Law School for changes inside the school and work to tackle the challenges in the world.”

Those include reconsidering the use of the school’s seal, which some students criticize because of its connection to a family that once owned slaves; changing it, according to Minow, would require the approval of the Harvard Corporation, the University’s highest governing body. Minow said the school also hopes to increase faculty diversity, while Marcia L. Sells, the Law School’s new dean of students, said she plans to hire a staff member to focus on diversity and inclusion, another demand common among student activists.

But even as Minow and administrators outlined those and other efforts on Monday, they drew still more criticism from students, who have framed the recent vandalism incident as a symptom of broader racism at Harvard.

They had more grievances to air on Monday. Minow and her colleagues spoke for most of the hourlong meeting, which ran overtime, and at the end, several students stood up and said they were frustrated that they had not had more time to raise their own concerns about the environment at the school.

Deeming the meeting “an absolute joke” but also “an incredible moment” with so many affiliates of the school together, second-year Law School student Isaac Cameron took to a microphone and voiced a concern common among student speakers at the event.

“This was a moment for the campus to come together and discuss how Harvard Law School can deconstruct institutional racism, and we spent an hour where you spoke and we listened,” Cameron said. “I can’t think of a better metaphor that represents what’s wrong here on campus.”

Law School professor Dehlia I. Umunna also spoke at the end of the meeting, telling attendees that she had received an email with a racial slur as the subject line over the weekend. “For those folks who think that racism is not alive and well or that it’s exaggerated or contrived—it’s not,” she said. “If you want to I can show it to you. It happened just on Saturday.”

In an email to Law School affiliates following the meeting, Minow scheduled another forum for Friday, acknowledging that not all students had time to talk on Monday.

“At today’s community gathering, the time spent conveying initiatives underway and planned went longer than we anticipated and, regrettably, we ran out of time to hear from people in the community who wish to contribute to our ongoing conversation,” Minow wrote.

As Minow and other administrators continue take steps address student concerns about racism at the school, Law School affiliates and observers continue to debate the black tape incident and what it meant. In an opinion piece published in the New York Times last week, one of the professors whose portraits were targeted, Randall L. Kennedy, questioned whether the tape was in fact placed out of hatred.

“The identity and motives of the person or people behind the taping have not been determined,” he wrote.

At the meeting on Monday, Minow said she was thankful for a breadth of faculty input on the incident.

“In this diverse community, some people may read the defacement of the portraits differently, I have thanked faculty members for their thoughtful views and careful consideration,” Minow said.