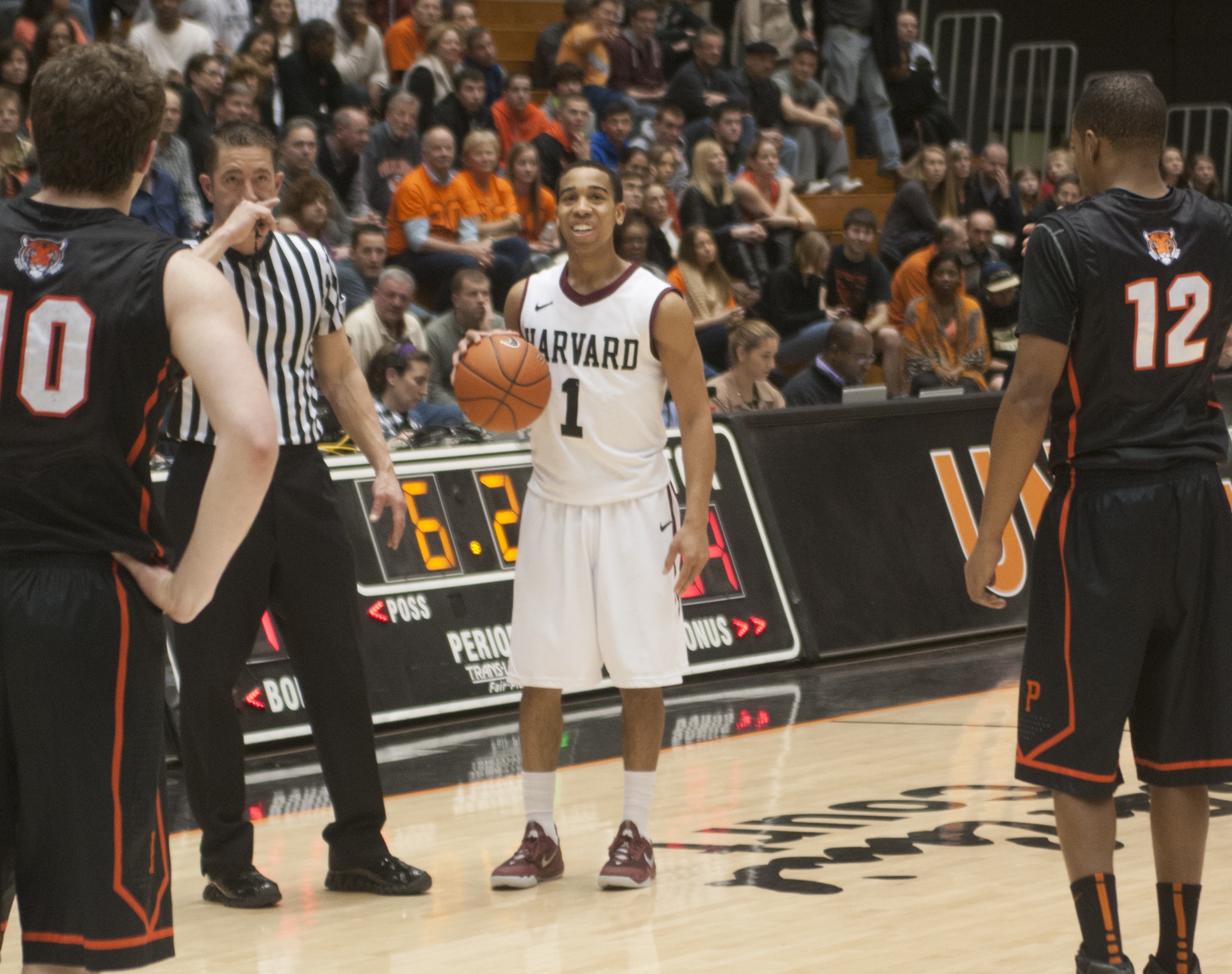 PRINCETON, N.J.—It was not the most exciting game that the Harvard and Princeton men’s basketball teams have played in recent years, nor did it have the most at stake—those honors go to the Tigers’ buzzer-beating win in the Ivy one-game playoff in 2011. But it would be hard to find a more intense matchup, as the league-leading Crimson (22-4, 9-1 Ivy) battled a Princeton team (15-8, 3-6) that, though it was out of the conference race, still clung tightly to its pride and to its 24-game home winning streak over its Cambridge rival.

And as the final seconds ticked down at Jadwin Gymnasium on Saturday night, the faces of the Harvard players wore expressions not seen in this building in a couple of decades: big, wide grins.

Carried by an improved second-half defensive effort and timely shooting from co-captain Brandyn Curry, the Crimson defeated the Tigers on the road for the first time since 1989, 59-47. The win also marks the first time in program history that Harvard has swept the season series against both Penn and Princeton.

“Those things will come back up, and when we get a chance to reflect on [them], they will have some bigger, greater meaning at some point,” Crimson coach Tommy Amaker said. “Right now, we are thrilled about tonight, and we are hoping we came out healthy.”

In the early going, Princeton showed why it was so tough to beat on its home floor, threatening to blitz the Crimson off the court. Perhaps flustered by the charged atmosphere, Harvard committed six turnovers in the first 10 minutes, and, over one stretch that lasted nearly nine minutes, did not score a single point.

“I kind of lit into our guys there, to be very honest, and I was disappointed that [the Tigers’] energy and their fight was greater than ours and our competitiveness at that point in time,” Amaker said. “In a lot of ways, I challenged our guys, and I am thrilled they responded the way they did. I am not surprised. There is a lot of pride on this team [and] in our locker room.”

Harvard responded to Amaker’s words with an 8-0 run to cut the deficit, which was once as large as 12, to a manageable five points at intermission. The Crimson sustained its momentum into the first few minutes of the second period. Two baskets from senior forward Kyle Casey and one from sophomore guard Siyani Chambers tied the game at 30 with 16:18 to play.

From there, the Crimson offense was keyed by Curry, who scored 12 of his team-high 17 points in the second half. In his final attempt at a win in Jadwin, the Huntersville, N.C. native hit two critical threes in the final 20 minutes, and seemed to be the one of the only Harvard players at ease shooting against the domed backdrop of Jadwin.

“[In practice], we expressed to [the underclassmen] how meaningful it was [to win at Princeton],” Curry said. “This is our last go-around, and the seniors before us did the same thing. You realize how much it means to you when you are there.”

A Princeton three-pointer brought the Tigers to within three with 6:16 to play, but the home squad would get no closer. Kicked off by a three from junior wing Wesley Saunders, the Crimson went on an 11-0 run that sealed the final result, with a smiling Chambers dribbling out the clock.

Princeton’s offensive execution deserted it during the Harvard surge. The Crimson locked down on the Tigers’ back-cutting offense, which had been executed effectively in the first half, holding Princeton to 26.1 percent shooting in the second frame. Tiger forward Hans Brase, who had 20 points in the squads’ first matchup this season, finished with three points on 1-of-8 shooting.

“Our normal way of guarding is to get out and pressure,” Amaker said. “That is the calling card of our program, but we need to adjust sometimes, and our adjustment there served us well to pull back and keep [cutting players] in front.”

The win moves the Crimson into sole possession of first place in the Ivy League—at least for 24 hours. Yale, currently sitting in second, has a chance to tie Harvard atop the standings with a win at Columbia on Sunday afternoon.

Entering the game with five conference losses, pride was, practically speaking, about the only thing that the Tigers were playing for. That pride was on full display on Saturday night in the raised arm of freshman guard Spencer Weisz after hitting a late three, in the raucous response from the student section, and even in the postgame media room. When asked if the winning streak over Harvard was something he had brought up to his players, Princeton coach Mitch Henderson’s response was terse: “Never.”

For the Crimson, the win means a sigh of relief and one less annual storyline about which it will have to answer questions.