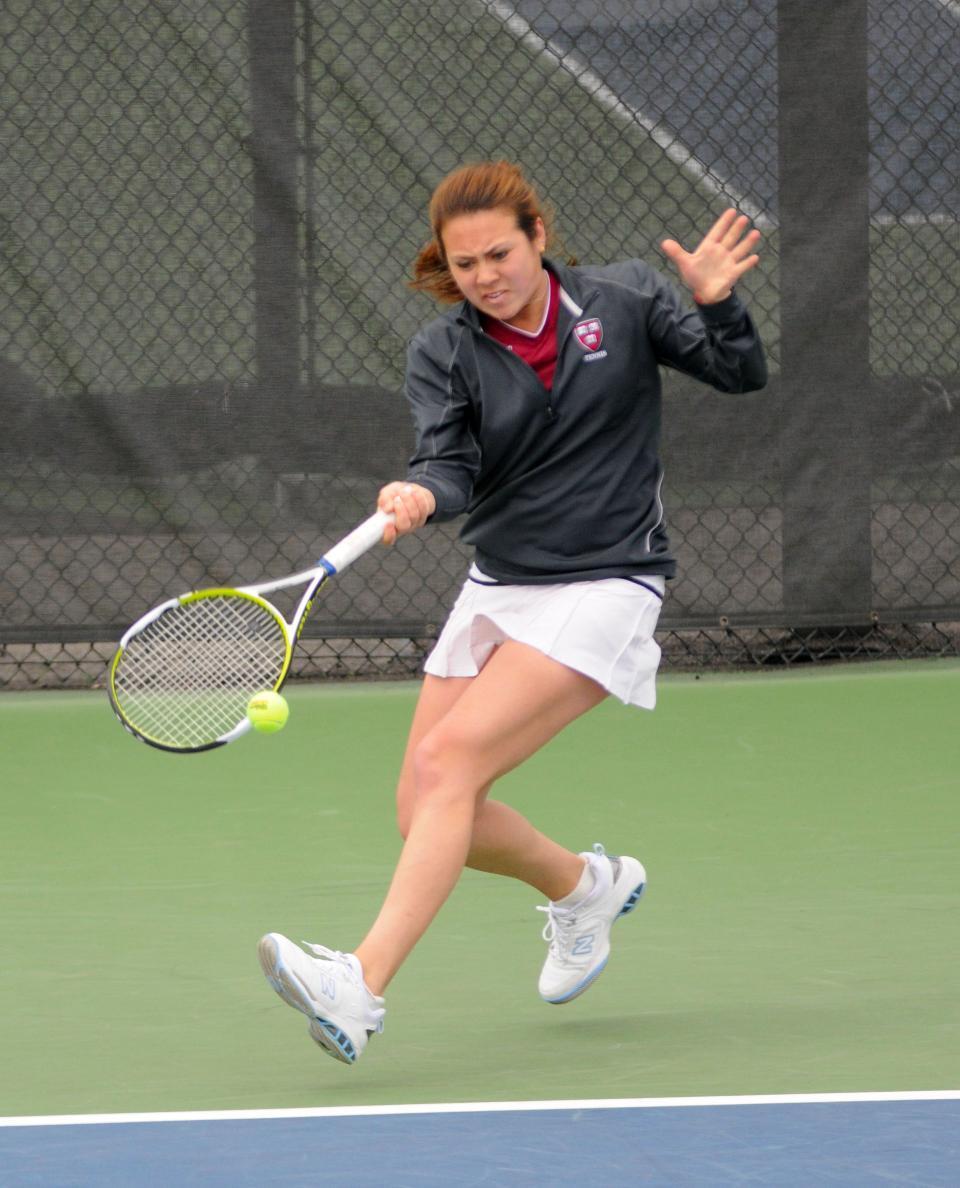 Co-captain Kristin Norton, shown above in previous action, teamed with fellow co-captain Hideko Tachibana over the weekend to compete at the Riviera/Intercollegiate Tennis Association Women’s All-American Championship. The pair fell to a duo from Duke in the tournament’s open
By Taryn I. Kurcz, Crimson Staff Writer

The Harvard women’s tennis team traveled to two different coasts this week to compete in two separate tournaments. Co-captains Kristin Norton and Hideko Tachibana flew to Pacific Palisades, Calif., for the Riviera/ITA Women’s All-American Championship, an invite-only event. The duo teamed up for doubles play but was unable to make it past the first round on Wednesday.

Friday through Sunday, the remainder of the team played in the William and Mary Fall Tournament in Williamsburg, Va. At the event, three Crimson players took first place in their flights: sophomore Sylvia Li and freshman Amanda Lin, who went undefeated in doubles play, and freshman Hai-Li Kong, who posted a 3-0 record in singles play.

“We all worked really hard this [past] week, and I felt we all improved a lot,” Lin said. “So this tournament, we all played a lot better.”

The tournaments marked the Crimson’s second weekend of competition following the Columbia Invitational on Sept. 14.

Harvard players participated in four of the tournament’s singles flights. Kong had the best performance for the Crimson with a first-place finish in the Cherle Dow Flight. The freshman breezed through the competition, never dropping a set and finishing with a 6-1, 6-0 win against Penn’s Alex Ion in the finals.

“Hai-Li played really well this tournament,” Lin said. “She’s worked really hard since the last tournament and has gotten a lot more consistent. She pulled through some really close matches and was really confident on the court. She just played unbelievable.”

In the same flight, junior Natalie Blosser finished sixth after losing 4-6, 6-4, 10-4, in the fifth-place match against Kansas University’s Paulina Los.

The Lauren Nikolaus Flight saw similar results for the Crimson. Lin swept her first two matches but also fell in the finals. She won the first set, 5-7, lost the second, 6-3, and was unable to pull out the tiebreaker, 10-5.

Li won her opening match but was unable to produce the same result in her next two, garnering a fourth-place finish.

Freshman Amy He was the only Harvard player in the Megan Moulton-Levy Flight, where she finished in sixth after losing the fifth-place match, 7-5, 6-3, to Carmen Sandor of Penn State.

Though the Crimson’s top doubles pair was not competing in the same tournament, Harvard still saw solid results from its other doubles contenders. The Katrin Guenther Flight hosted two Crimson tandems in the finals. The pair of Li and Lin defeated teammates Kong and Blosser, 8-4, to earn first place.

Harvard’s final duo of He and Morrill took fourth in the Karen van der Merwe Flight.

Doubles partners Norton and Tachibana traveled to the west coast for the qualifying rounds of the All-American Championship. The tandem faced Duke’s Mary Clayton and Marianne Jodoin in their first and only match, which they lost, 8-4.

“Hideko and I didn’t play to the best of our abilities, but it’s always an honor to get invited to the All-American Tournament because not many teams qualify,” Norton said. “It was still a great opportunity to be at a tournament where the teams with the best results compete against each other. And even though we lost to the team from Duke, they were great players and we were excited to be there.”