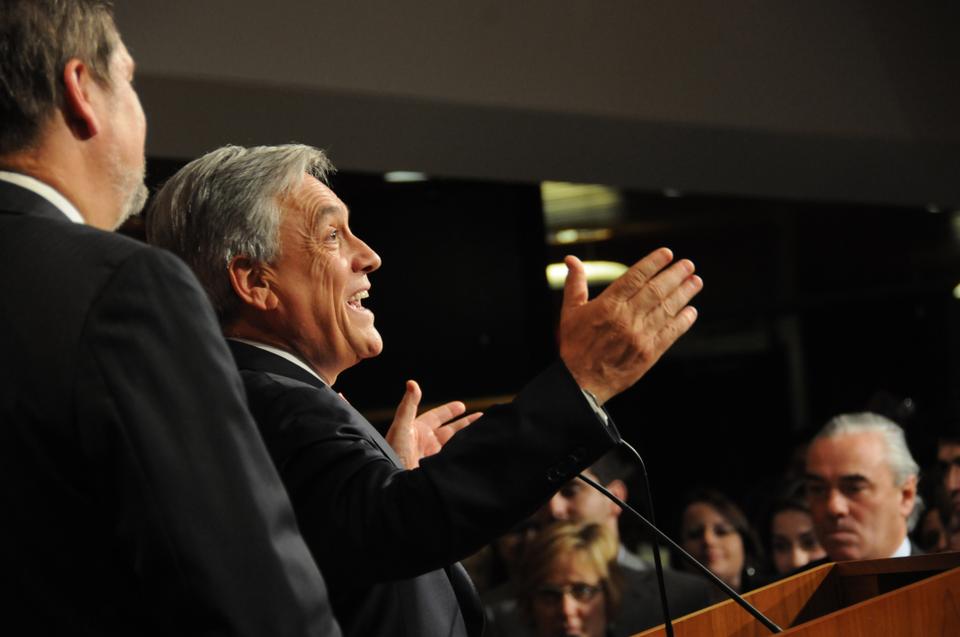 Despite recent protests about his new policy to privatize education, the Chilean President H.E. Sebastián Piñera delivered an optimistic speech about the future of Chile's education system. In addition, he spoke of the Chilean economy, its international initiatives, and his times as a Harvard graduate student studying Economics.
By Jose A. DelReal, Crimson Staff Writer

President of Chile Sebastián Piñera defended his administration’s attitude towards the protest movement in Chile at a forum held at the Institute of Politics on Friday, charging that he and his administration have been receptive to demonstrators’ demands. Piñera also stressed Chile’s need to continue advancing the country’s economic status.

A large crowd of protestors gathered outside of the IOP on Friday during Piñera’s speech, chanting “La Gente unida jamas sera vencida!” which is Spanish for “The people united shall never be defeated.”

The demonstration comes amidst a recent spree of protests against the Piñera government over the past four months. A mass demonstration in Chile’s capital city of Santiago last Thursday included tens of thousands of protestors marching through the streets.

Piñera is deeply unpopular among students and teachers, who have been protesting the government’s education policies as well as the funding disparities between private and public schools, which some have referred to as “educational apartheid.”

Holding an approval rating of 27 percent, Piñera holds the lowest rating of any Chilean president since 1990, when dictator Gen. Augusto Pinochet was still in power. The disapproval rating for the current administration’s education policy is even lower at 19 percent.

Critics of the Piñera administration have charged that the government has sought to suppress protests, effectively stomping on students’ and teachers’ freedom of assembly.

“We have never repressed the right to gather or protest. That is a constitutional right,” Piñera said on Friday.

Piñera also pointed to steps his administration has taken to improve the education system in Chile, recently promising a $4 billion dollar increase in education funding.

“Our government is dedicated to quality, access, funding, and equality in education. [We are] undertaking the educational reform that should have been undertaken many years ago by former government [administrations],” Piñera said. “We’ll do that because, while we were not a part of the problem, we want to be part of the solution.”

One of the protestors’ key complaints is that income disparities prevent poor students from affording a university-level education.

But Piñera shot back at calls for university education to be free and government-subsidized for everyone.

“At the university level, we think that education should be free only for those people who really need it. We don’t think it is feasible or fair to advance the education of the rich,” Piñera said.

Striking a different tone, Piñera also pointed to his administration’s economic accomplishments since he assumed office in 2010.

The International Monetary Fund projects that Chile’s total growth in GDP will be 6.5 percent by the end of 2011, even as the U.S. and Europe continue to suffer from the global recession.

But the President is also cautious about the road ahead for his country, citing that Chile is still considered part of the developing world. “We are still only half way in our mission to transform Chile,” Piñera said. “Some people thing we have reached the summit, but ... we must continue to work over the next decade.”

As he finished his remarks, Piñera paused to impart some advice to students in the audience.

“You are in the best parts of your lives,” he said. “So try to share your idealism and optimism with people who are older than you, like me.”

—Staff writer Jose A. DelReal can be reached at jdelreal@college.harvard.edu.