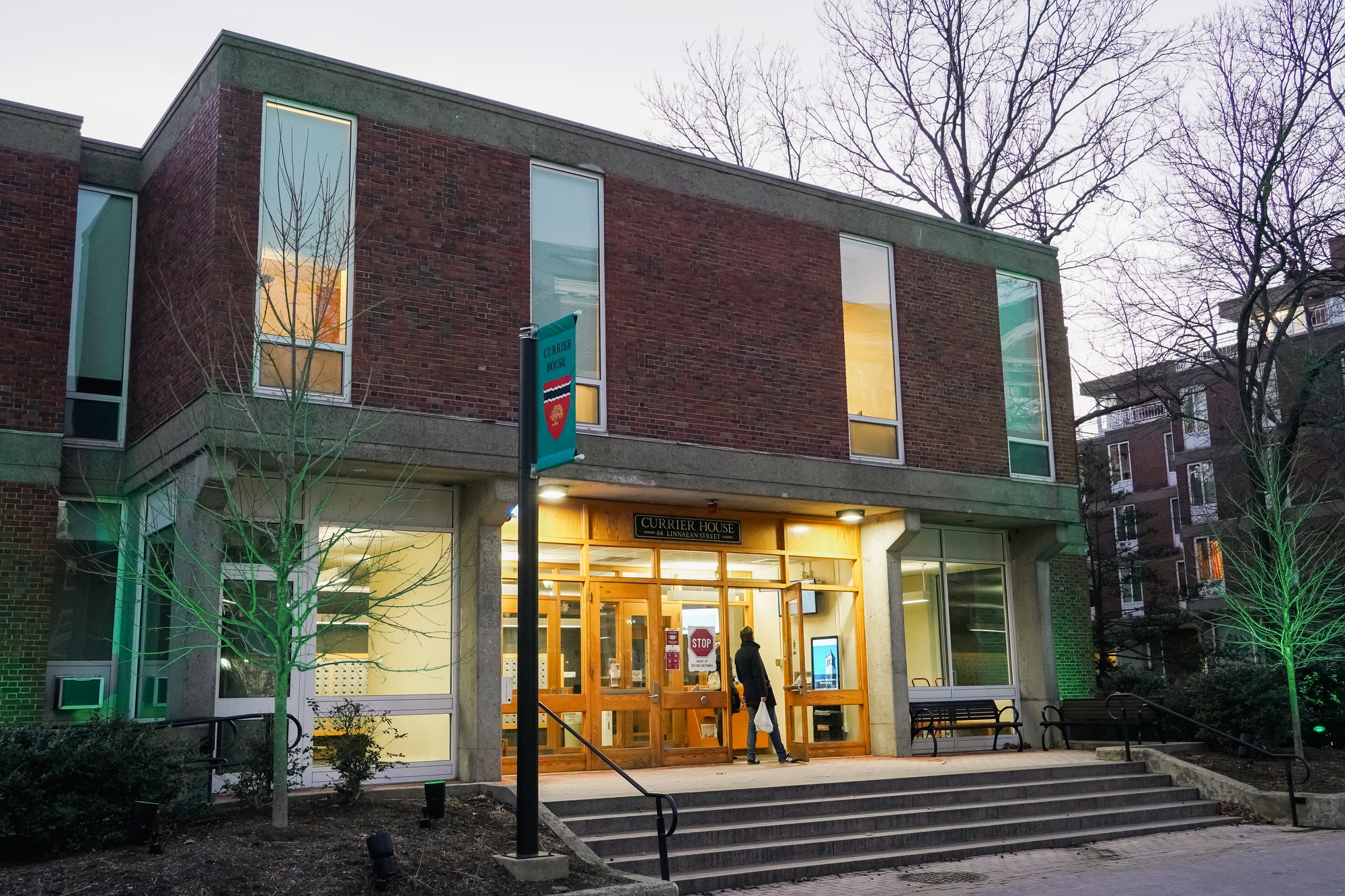 By Joey Huang
Welcome to Currier House, a House you’ll definitely want to “curry favor” with the Housing Gods for! Get it? With kitchens galore, (objectively) the best food on campus, and spacious singles to crash from your food coma, Currier House is truly unmatched. But the best part of getting housed into Currier is immediately being welcomed into its community (oh, and maybe the fountain in the dhall).
By Raymond Wu 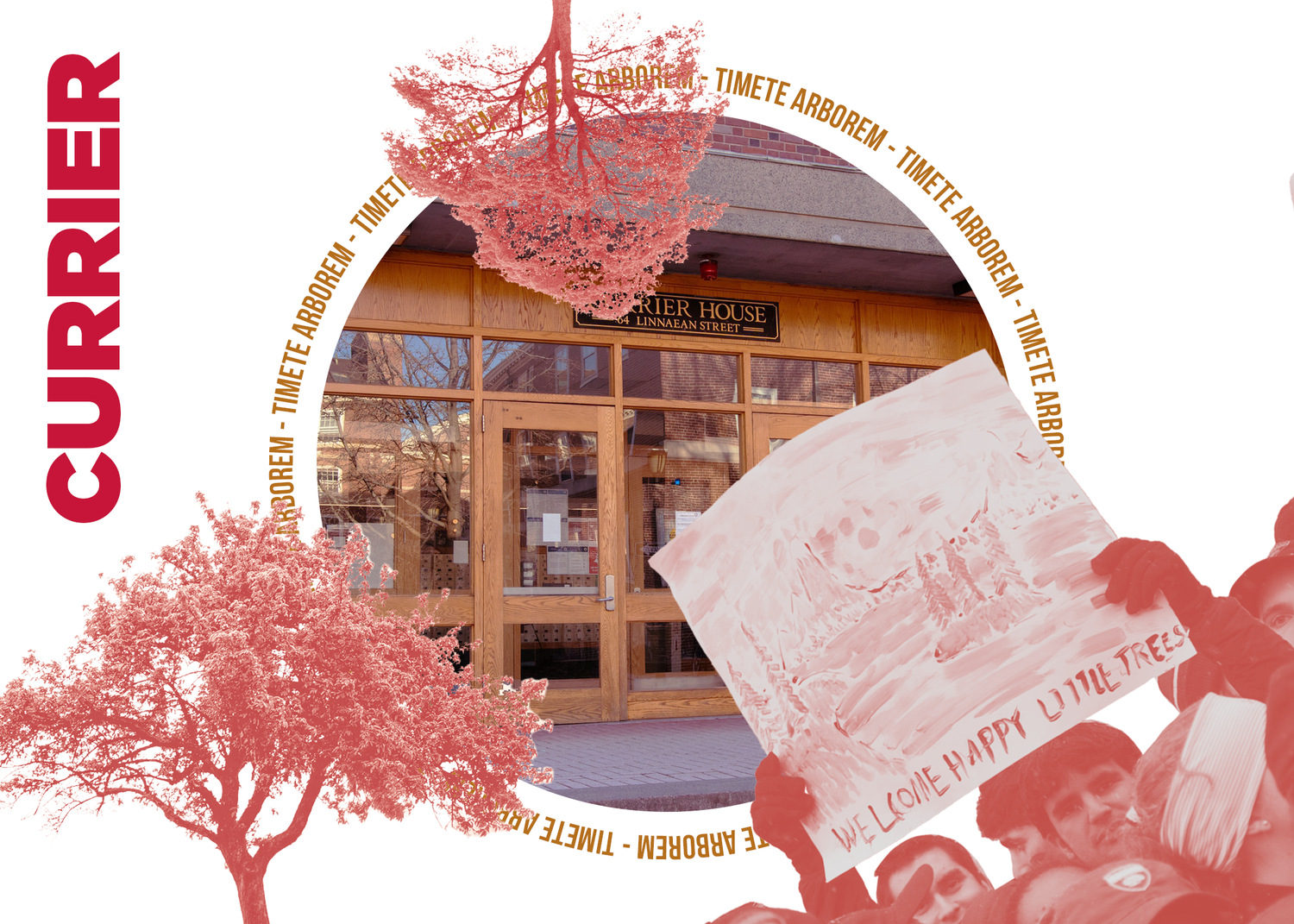 By Madison A. Shirazi

Currier’s layout is designed to foster a welcoming community. There is one entrance to the House and it leads to Lower Main, the central hub that hosts the dining hall and the Fishbowl (a common room with a large screen where you can join impromptu anime or “The Bachelor” watch parties). Because there’s only one entrance, all House residents pass by the Dhall or the Fishbowl on their way in and out, making it easy for them to see friends and stop and chat along the way to their destinations, a feature unique to Currier that House Committee chairs Nina K. Chung ’23 and Ruhi Nayak ’23 really appreciate. “It’s a very welcoming space [and] very comfortable. The whole house is connected so everyone will come down to the Dhall in their pajamas, for example,” said Chung. 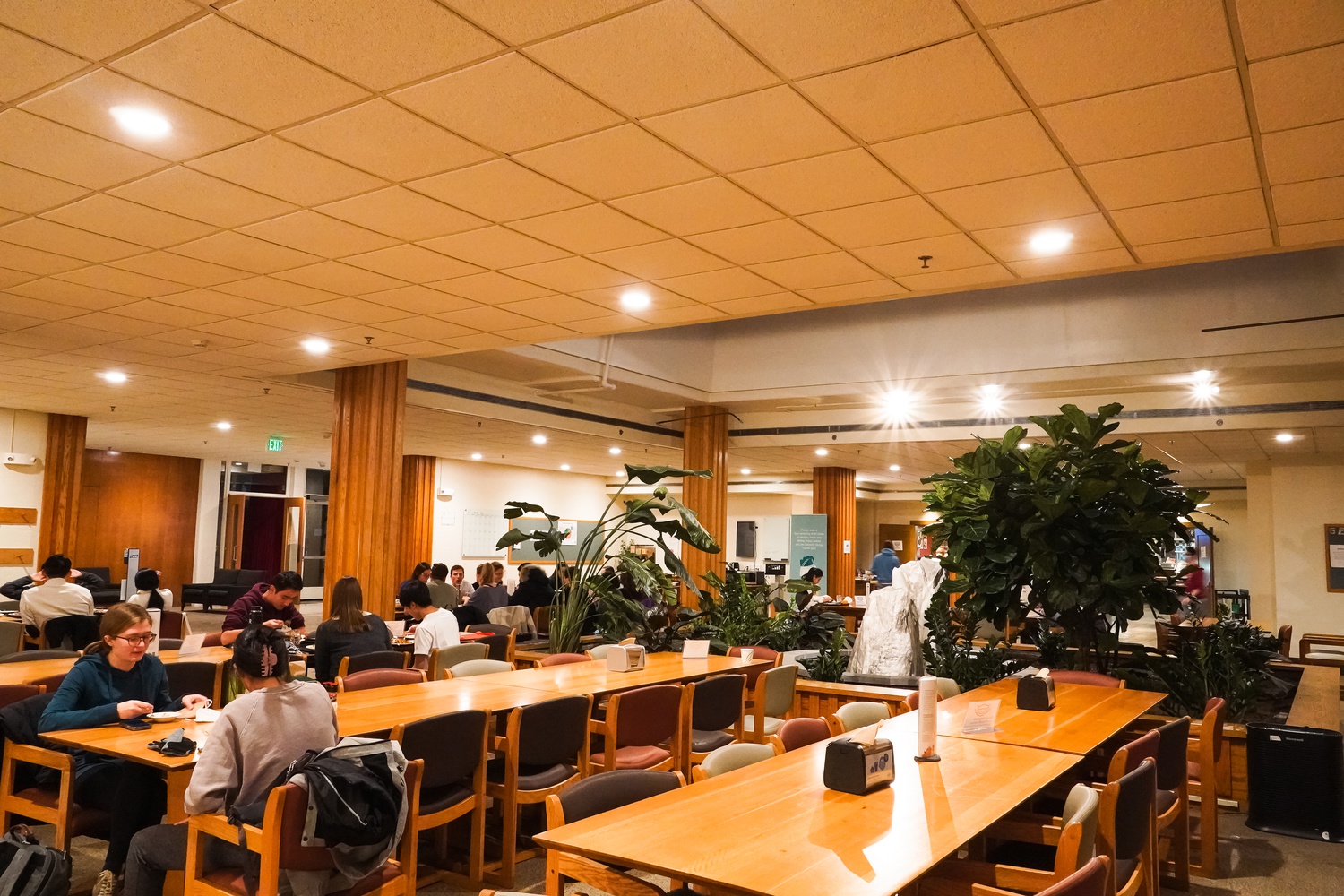 Currier is also an amazing space for hobbyists of all kinds, whether you’re a seasoned pro or are just looking to pick up a new skill. You can cook in one of the 52 (!!) kitchens, dance in the dance studio, sew something in the Makerspace, or just play foosball in the common room with friends. If you’re looking to pick up a new instrument, Currier even once sent out ukuleles for free and held lessons.

But what about the actual dorms themselves? Well, Currier is known for its spacious (and plentiful!) singles, so while your friends may be stuck in doubles or triples their sophomore year, you get to live it up in your own personal room. The dorms in Currier are split between four towers, and they come in two main formats: two singles connected by a bathroom, and a more typical suite layout that occasionally includes a kitchen and private balcony access (!!) from the bedrooms.

As a sophomore, you’ll likely be placed in the former setup, so while you won’t have a dorm common room, you will still have access to the common rooms on each floor of the towers where you can cook and hang with friends. Currier also has the “Ten Man,” which, as the name suggests, houses ten people and boasts the largest private common room on campus and even its own elevator.

Currier hosts two main events throughout the year: Heaven and Hell, and Currioke. Heaven and Hell is a massive Halloween party with a “very storied history,” according to Chung. Currioke is, as the name suggests, a huge karaoke night where you can sing all your anxieties away. Aside from these two large events, Currier also hosts smaller events including ski trips, s’mores nights, Currier-exclusive fancy dinner nights (“where I had the best bacon mac and cheese in my life,” said Nayak), and even a Shrek-themed stein once. 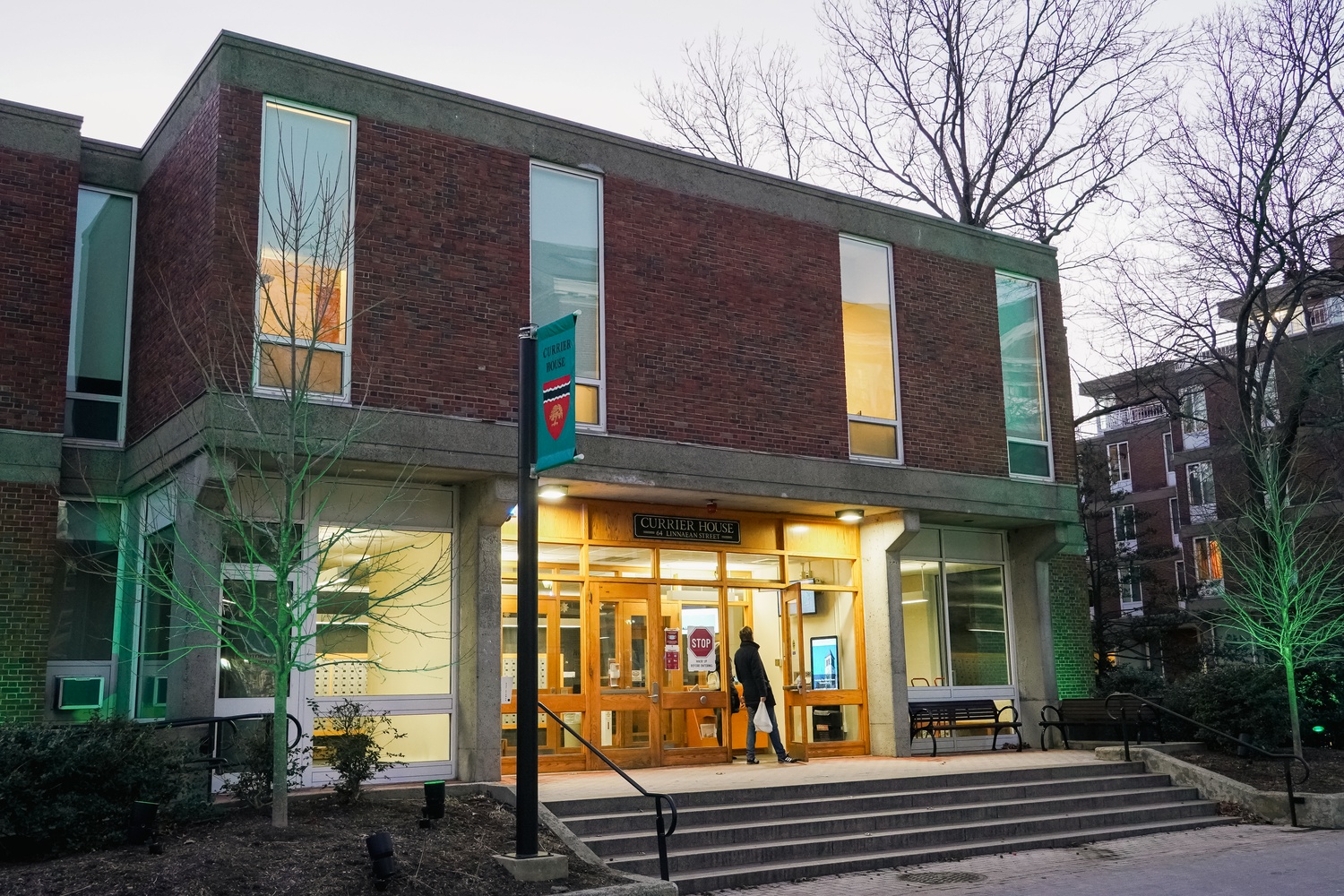 The faculty-student relationship is also at the heart of Currier’s amazing community. The current Faculty Deans Latanya Sweeney ’95 and Sylvia Barrett ’94 are known to ride around on segways and pass out cider to students walking by, for example. “A lot of times the tutors will come to you, so you get to know them. I feel like in college, sometimes, you can be very disconnected from adults who can give you really good advice, and they’re really there for that,” Nayak explained.

Currier has also been ranked as the most sustainable house for multiple years in a row now, and that may be in part influenced by their mascot: a tree. Felix B. Bulwa ’23 is the person under the suit this year, and he believes the mascot is essential in inspiring “a little bit of reorientation towards focusing on the here and now and the community and the [school] spirit.” While a tree might seem a little silly, the mascot is actually based off of an apple tree in Radcliffe College, symbolizing Currier’s status as the most inclusive house (especially since Currier is the only house named solely after a woman). 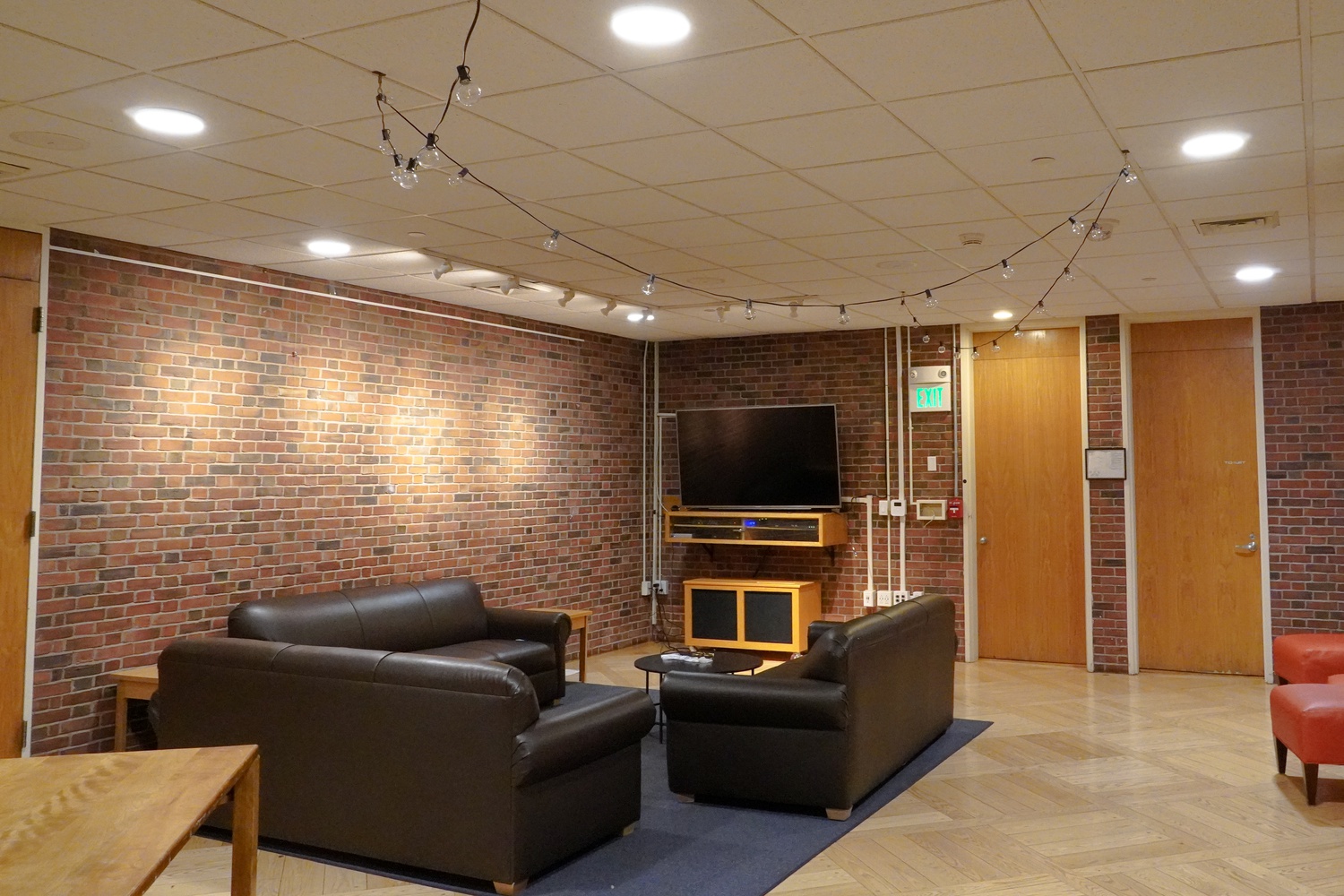 Still curious about Currier and want to learn more? Well lucky for you, I interviewed the HoCo chairs to really get a feel for the ~vibe~ of the house.

If you had to introduce your house in just five words, what would those words be?

RN: Welcoming is one of them for sure. Home — that’s the first thing that comes to mind.

If Currier won the lottery, what would it do with it?

NKC: So many nice outings. Ski trips would happen instantly.

RN: Food. Food is so huge. I love that this house likes food as much as we do. Fancy dinner is the norm. Increase the HUDS staff pay.

If Currier was in a horror movie, (when) would it die?

RN: I feel like we’d survive to be honest. This place is so calming. You hear the fountain in the background. The killer would be like, “Ah, too calming to kill. Too relaxing.”

NKC: Bringing in our tree mascot, our roots go deep, so even if we were to be cut off, we’d grow back.

Read more about the other Houses here!