Guide to Harvard for Yalies 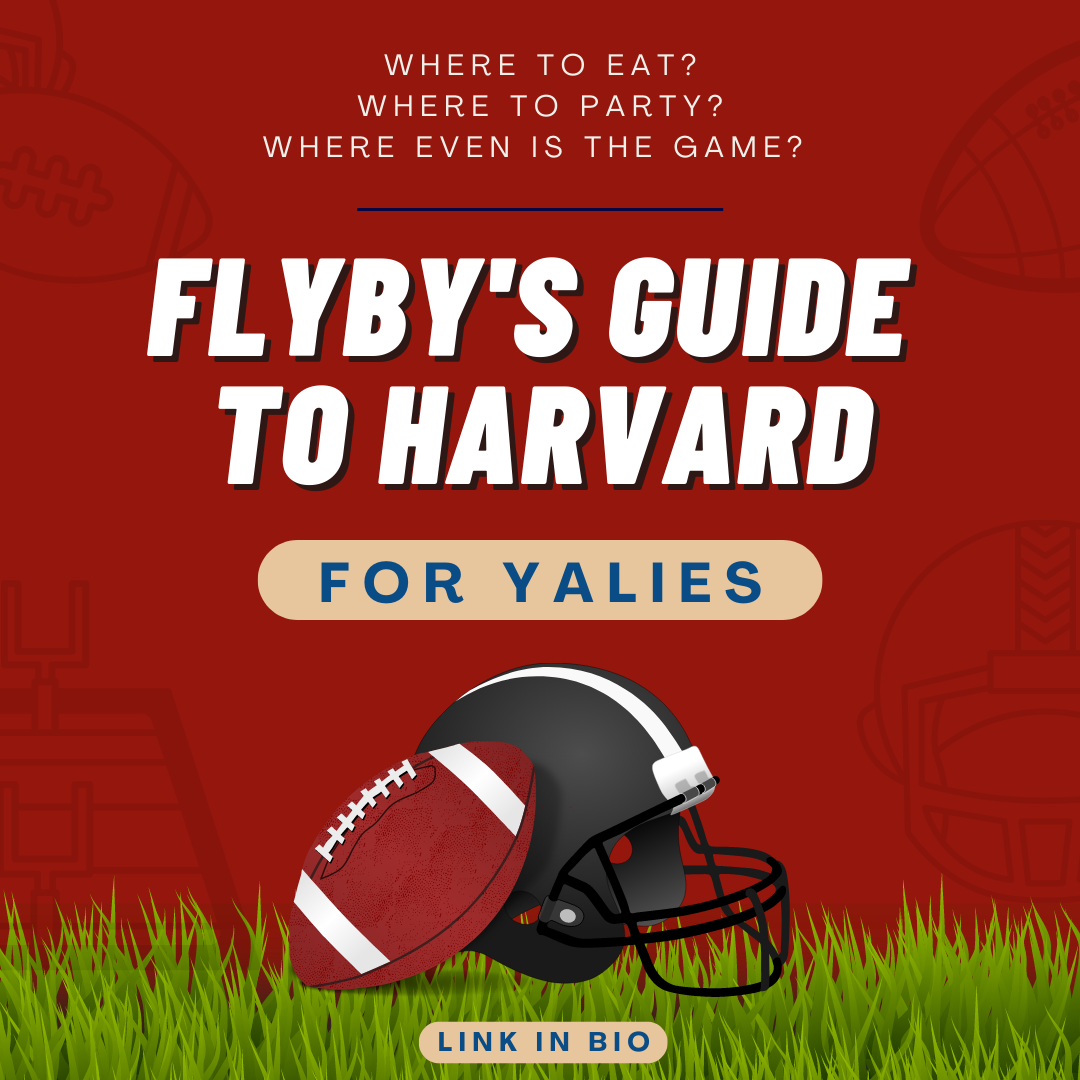 Yalies — welcome to Harvard! It’s that time of the year when bulldogs and crimsons (?) get together to tailgate and watch some mediocre football together. Let’s face it, college campuses are confusing. At last year’s game, I felt completely lost in New Haven — why was the stadium so far away? Why are all the buildings so much more hawkish than Harvard’s? Why was everyone staring at my “yuck fale” hat? All this to say that a guide to Yale would have been helpful. So, if you are a bulldog feeling a bit lost in Cambridge, read through this ultimate guide to Harvard, catered completely to you.

For breakfast before the big game, the Square has a few options. Head to Tatte or Bluestone Lane for a ~bougie~ brunch (though don’t be surprised if lines are long and tables are all full, because that’s the case on a regular Saturday, let alone Harvard-Yale Saturday). If you are feeling adventurous, you can always sneak into a dining hall on campus for Saturday brunch — check out how HUDS and YUDS compare. Just in time for your visit, a brand new Starbucks just opened in the Square this week. The last one was replaced by a merch store. It’s fine (it’s not). CVS is always a good idea, and it offers unlimited snack options, 24/7. For late-night treats, try Pinocchio’s, Jefe’s, Felipe’s or Insomnia Cookies. Nothing quite like a hot slice of pepperoni pizza, an overflowing burrito, or a melty cookie to sustain your drunken stupor.

This is a tough one. Tasty Basty is an experience that everyone should have at least once in their lifetime. What’s Tasty Basty, you ask? Flyby’s got you covered (link to Corinne’s article). As for Finals Clubs — I wish I knew what they are going to be up to H-Y weekend. If you aren’t on their list, you can always vibe along to their thumping music as you make the humbling trek to the new Jefe’s by the Red Line.

Ah, the shuttle. This one is a sore spot for a lot of Harvardians. The Harvard shuttle is run by the University to help students get from place to place, because this campus is huge and Massachusetts is cold. The shuttle has different routes, and to get to the stadium (that’s the giant, concrete, Colosseum-like building across the river), you’re going to want to get on one that says “Quad-SEC,” “Allston Loop,” or “Quad Stadium Express.” Sometimes the shuttle comes. Sometimes it doesn’t. It’s all an adventure, really. My personal suggestion is to walk places — this way, you’ll know you’ll eventually get to where you have to go. Whatever you do, don’t try to use the shuttle’s app, Passio Go.

Harvard randomly splits undergraduates into 12 upperclassmen houses at the end of their freshman year. Three of these dorms are in a place called the Quad, which is a bit farther away from the Square. Relative to the stadium, the Quad is on the opposite end of campus. So, chances are you won’t have any reason to visit, unless you are staying with a Harvard student who lives in the Quad. In that case, again, good luck to you. The good news is that you will get to shake off the hangover and fit some extra steps in on your way to the stadium.

Why everyone is so excited the Game is happening at Harvard this year?

It’s been a while since Harvard has hosted Harvard-Yale (re: 2016!). The Game was hosted at Fenway when the stadium was being renovated (in 2018), then Covid-19 hit (2020), and then it was Yale’s turn (2021). So, Harvard students and alumni alike are super excited about this year’s game. Chances are some fun alums will be dotted around Cambridge this weekend — keep your eyes peeled for a Zuckerberg, Conan O’Brien, or Matt Damon sighting.

Hopefully, this crash course to Harvard was helpful. Use this information to get around Harvard’s campus, impress your weekend crush, or make yourself feel better about having chosen Yale — jk, that last one is impossible.