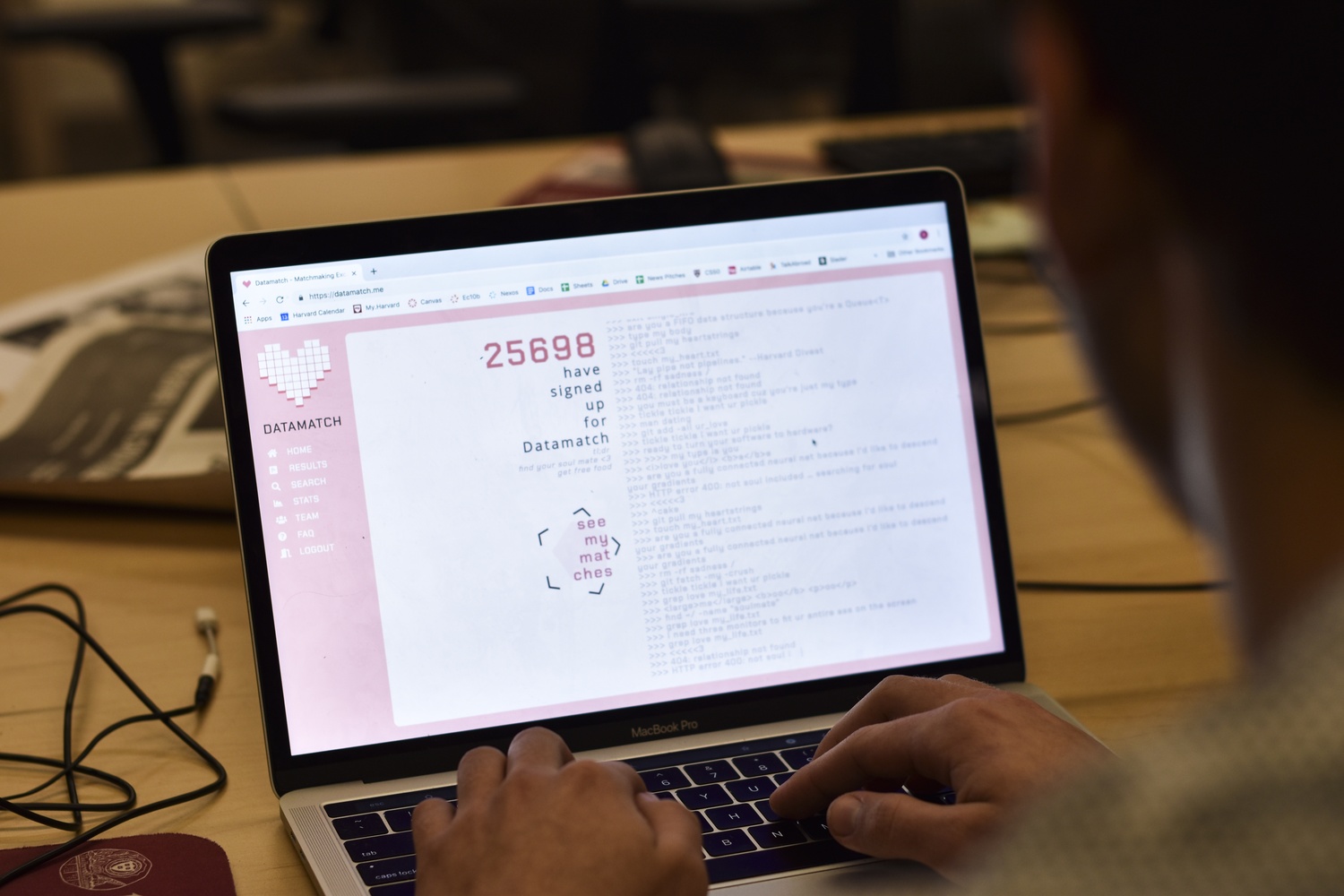 While Valentine’s Day may not be for everyone, there’s one Harvard tradition that just about everyone can get behind: Datamatch. This year marks the 25th anniversary of everyone’s favorite matchmaking survey, so we came up with 25 questions for Datamatch co-presidents Teddy T. Liu ’20 (a former Crimson technology chair) and Ryan Y. Lee ’20.

1. What are your official positions within Datamatch?

RYL: We got custom ‘Supreme Cupid’ shirts, and part of me was worried that CustomInk wouldn’t print it because of the word ‘Supreme.’

2. How long had you been on Datamatch before becoming Supreme Cupids?

RYL: We both joined as Freshmen, and rose up together.

3. So, have both of you been on Datamatch dates before?

TTL: Yeah...I think the last one I went on was actually my freshman year. I haven’t been on one since then.

RYL: Freshman year I went on a Datamatch date, and prior to that Datamatch date, I had written, for Expos, a paper on Hamlet. I’d been writing this for two days, and it was kind of a dark look on Hamlet and I was totally in that headspace. And so I went on the date, and for whatever reason I kept veering the conversation to extremely dark, deep topics, like ‘What is the meaning of life when we all just perish anyway?’ And she was just sitting there, clearly trying her best to be like ‘Oh, yeah[…].’ From a mutual friend, I heard that apparently I came off as too negative.

RYL: No, I did not. I totally understand why.

6. So if you could describe the ideal Datamatch date in three words, what would they be?

7. What would you say to the Datamatch skeptics out there who haven’t participated before?

TTL: If you need an excuse there’s free food, that’s what we always say. Like if you want to pretend you’re jaded and don’t believe in love, then there’s always free food. I think everyone can subscribe to that.

8. So seeing as it’s the 25th anniversary, do you have any idea how the Datamatch founders were inspired to start this whole thing?

TTL: Who are the founders?

RYL: It is unclear here. A lot of times we get hit up on LinkedIn or something.

TTL: Yeah, like last year somebody randomly tweeted Oh, the thing I started 20 years ago[…].

RYL: I like to think that the founders had a crush on somebody on campus and created the whole thing to kind of get some insight...and make some magic happen.

9. What’s the deal with the missing year? Datamatch started in 1994, but 26 years later it’s the 25th year of datamatch?

RYL: The only tidbit that we really know is that a couple of years in they actually had to cancel the survey because there was something involved with a fire and champagne popping going wrong, or something along those lines. There’s a lot of lore.

10. Obviously we’ve come a long way in both technology and love since 1994, so how has Datamatch changed since its beginnings?

TTL: Well it started as pencil and paper, so like, hand matching. We’ve clearly left that in the past, which has allowed us to reach a lot more people. This year we’re going to be at 25 or more schools, and we’re nearing 100,000 users.

11. Ok so expansion to other schools is great and all, with one key caveat: Why did you let Yale have Datamatch??

RYL: Valentine’s Day is a day of love, and I’d say forgiving, and trying something new. As villainous as Yale is, at heart, we are on two sides of the same coin. And that coin is Datamatch.

12. Seeing as this is the 25th anniversary of Datamatch, are there any shiny new surprises that students should expect to see this year?

RYL: We can’t spill the beans. You’ll have to sign up at datamatch.me.

13. How much has the *ultra secretive* algorithm changed since the beginning?

TTL: Even in the time that I’ve been there, the algorithm has seen a pretty significant amount of change. We’d like to think that it’s more accurate, that its predictive powers have increased.

RYL: You should tell them about the story!

TTL: We’ve been hearing stories from last year even where some people started dating after Datamatch, and then they thought, like, wait a second, you know, your name sounds kind of familiar from before. They asked us to look for them and it turns out they had been matched by the algorithm.

RYL: So maybe there’s some oracle behind the scenes.

14. People love to speculate about the Datamatch algorithm, so give me some non-CS metaphor for the complicatedness of the algorithm.

RYL: Imagine a whale, but the size of a lime. And the lime is the blooming of this magnificent tree that has more whale-limes. From that whale-lime tree, we pluck the limes and make them into a delicious limeade. That’s the secret sauce.

15. The website says that Datamatch has about an 80% participation rate at Harvard — what drives Harvard students to fill out the Datamatch survey in such ridiculously high numbers?

RYL: It’s February. It’s very cold. Everyone's kind of tucked away. If we’re bears in the middle of the winter, it’s a nice chance to stretch out our legs and meet all the other bears in the area that you might not have a chance to have met. You can go to the local garbage stop and crawl through the garbage together in search of nutrients.

16. How many marriages do you think Datamatch has caused in 25 years?

TTL: It’s more than one. We have a confirmed marriage.

RYL: I’d like to think that number is around a few dozen.

17. A lot of people do Datamatch for the free food, so has free food always been a part of Datamatch?

RYL: No, it’s actually pretty recent. Datamatch has always been around, but it was either the year when we were freshmen or the year before when Datamatch kinda kicked it up a notch. One of the former presidents of Datamatch decided to add the free food as an extra extra incentive to like, actually go out. And yeah, it was a big hit so now it’s a tradition that we keep up. A very expensive tradition, but very exciting for everyone.

RYL: I remember this specifically because at a meeting, I thought it would be funny if we read off the most popular old questions. One of them was so ridiculous that it made me blush. So the question was, ‘What is your favorite whale noise?’ and the five responses were all variations of [Lee imitates whale noises] ‘Ooohhahhhhh kakakaka oahhhh.’ I had to, in front of the entire club, make these noises, and I think everyone lost a little bit of respect for me.

19. Has anyone on the Datamatch team ever used Datamatch to scheme someone? Or have there been any great Datamatch success stories on the team?

RYL: It was like October last year, and I was single. I had this wave of inspiration to make a dinner reservation for two on Valentine’s Day with nobody in mind, thinking to myself, like, this is my deadline to find someone special. And it’s like the day before Valentine’s Day, and I have nobody. So I was joking about this with one of my friends and she was like, kind of teasing and making fun of me for it, and Valentine’s Day comes around. And we have this [Datamatch] feature that I want to emphasize for everyone that if you opt in, you can like search for other people’s names and hit ‘match,’ and if they hit ‘match’ for you, then you’re both notified. And so I remember that morning, I hit ‘match’ for her, she hit ‘match’ for me, and we both got the ‘notified’ email. I texted her like ‘Hey, do you want to hang out, like, tonight sometime?’ and she’s like ‘Hey, do you want to use that dinner reservation?’ So the first date with her was dinner on Valentine’s Day, and we’re still dating now. So yeah, I owe Datamatch my girlfriend.

20. What’s something that students might be surprised to learn about the ‘behind the scenes’ of Datamatch?

21. If Datamatch was a dating app, which dating app would it be?

TTL: I feel like it’s really unique. It’s not like any of the others because I don’t think we take ourselves too seriously.

22. Describe the Datamatch spirit using a celebrity who used to go to Harvard, a Harvard building, and a HUDS dish.

RYL: Rashida Jones. Just that energy. I feel like we have to mention Red Spiced Chicken. We’re spicy.

23. Today, everyone loves Datamatch, but in Datamatch history has there ever been any backlash from students or administrators?

RYL: Well, we don’t hack into the houses’ internal facebooks and steal the images…

24. What do you see as the ultimate future for Datamatch?

RYL: You know, at the end of the day our core goal is to spread the love and help, you know, spread joy and excitement.

TTL and RYL: Do Datamatch!