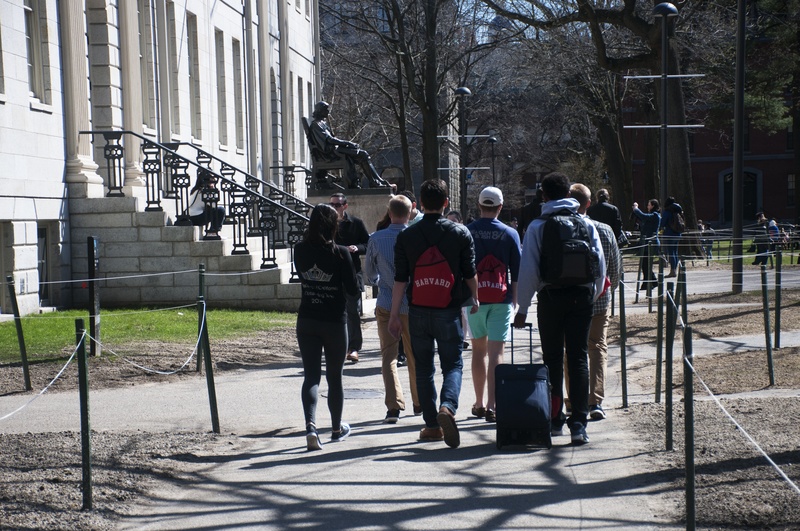 We brought you the types of Visitas hosts, now see if you can spot all these types of prefrosh.

This prefrosh has done all of their research and is ready to attend as many sessions as physically possible throughout the weekend. They’re an active member of the Class of 2022 Facebook page and have kept up to date with everything you can slap a -tas on since their acceptance. You can find this prefrosh posing for a photo on the Widener steps with their Harvard 2022 banner, and their lanyard hanging proudly around their neck. Various pamphlets and pieces of merch will be spilling out of their red Visitas drawstring.

This prefrosh had their heart set on another school and unfortunately had to settle for Harvard. They spend the whole weekend complaining and dropping hints that it’s so much sunnier in Palo Alto.

This prefrosh just wanted some extra days off their senior spring semester. In the process, however, they constantly bring that up they’re actually going to—and maybe even already committed to—another Ivy when introducing themselves at events. While others are scared of getting rescinded, this prefrosh will try to smash their host, convince as many others to partake in their debauchery, and overall be the worst influence on the 2022’ers.

You can find them being goaded by the Elsewhere Commit to drunkenly pee on John Harvard. Whether they tote an unusual inclination to dank meme, or a vodka-filled water bottle, you already know they won’t be on campus come fall.

They took the “parents are invited” thing too seriously, and when you meet them you’ll also have to introduce yourselves to James or Susan, who insist that you call them by their first name. As if that encounter wasn’t cringey enough, chances are you’ll find yourself sitting next to their parent on whatever bus/train/plane you’re going home on.

The prep school world is a small world, especially at Visitas. These prefrosh can be found hanging out with their upperclassmen friends and walking around with a massive squad on the very first day. They can also be overheard discussing the impact of this year’s record low acceptance rate—only 12 of their friends got in instead of 16.

This prefrosh is sort of a mess, and pretty torn about everything going on that weekend. Whether they are let down because they had the false expectation that Harvard was known for its crazy parties, or are going back and forth between a few schools, they’re noticeably whiny and bitter. They might lament at Partytas, “Bulldog Days was fun but I feel like I'm definitely getting a different vibe here.” They can be spotted donning a Yale hat, a Stanford sweatshirt, and MIT sweatpants, and won’t stop griping about the difficult decision they face.

Visitas is an exciting weekend for all but can definitely be overwhelming—even for you overeager types, who think you have it all figured out. Fear not, whether you ally with your prep school buds, fellow complainers, or that bad influence, Visitas is not the be-all, end-all decider of your identity or friend group. Live a little, and don’t worry about trying to (actually, please don’t try to) fit into one of these types.