Roving Reporter: A24 at Harvard 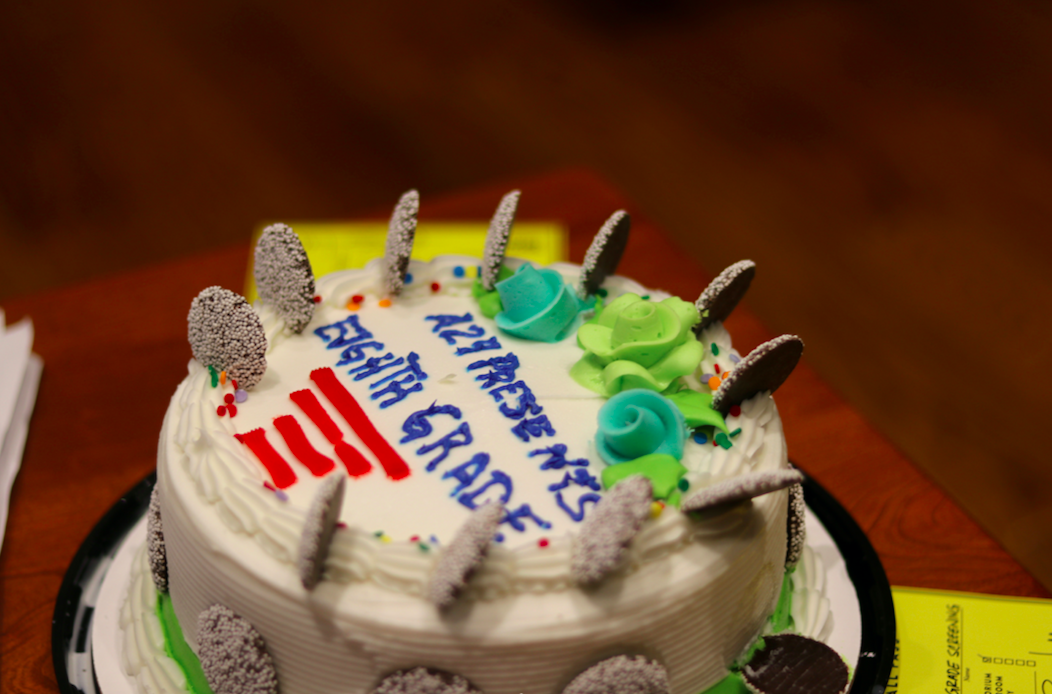 The A24 at Harvard launch party was held in Leverett Library Theater Wednesday evening and was followed by a screening of Eighth Grade at the Brattle Theatre. By Amy Y. Li

On Wednesday, Sept. 19, a swarm of students descended on the Leverett Library Theatre. The draw? Free sushi, cake, and a new patron of Harvard’s film scene. This year, A24, the independent film studio behind hits like “Moonlight,” “Lady Bird,” and “Hereditary,” launched campus initiatives in conjunction with interns at schools across the country, including Harvard, to encourage young filmmakers and support local college film festivals. The students behind A24 at Harvard had arranged an inaugural launch party and screening of their new movie “Eighth Grade” to celebrate their arrival on campus and open a new chapter in Harvard film.

RR: Why did you come to the event today?

SPL: I’ve been wanting to join the Harvard College Film Festival, and help work with that. And I know A24 is affiliated with it this year, and [the Film Festival] told us about this, and it seemed like an awesome opportunity to come meet some people, and go to a show.

RR: Have you seen anything by A24 before?

SPL: “Lady Bird” last year. I missed “Hereditary," but “Lady Bird” was my favorite film of last year and I think A24 is doing a great job of taking filmmakers and helping them out and bringing their really personal works to the big screen.

RR: What impact do you think A24’s presence will have on campus?

SPL: What it’s done so far has been drawing people into helping with the film festival, to join in their initiatives this fall. A24 is a big name, people love their movies, so it definitely brings attention to some of those clubs that do awesome work but don’t have as much notoriety.

RR: Why did you come to the event today?

YZ: I’m a big fan of A24, I’ve seen several of their movies, and I guess I’m just a big fan of any campus driven movie initiative.

TI: A24 movies are some of my favorites, and I thought [a representative from] A24 was going to be here tonight.

RR: What are your favorite A24 films?

TI: I think probably “Lady Bird.” I thought “Hereditary” was so overhyped, honestly. It felt like it was just trying to be different for the sake of difference. Besides “Lady Bird," I just saw “Room.” It was really good.

RR: What impact do you think A24’s presence will have on campus?

YZ: The Film Festival has been around for a while, but it’s been very under the radar. I’d like to see something more cohesive on campus.

RR: What made you come to the event today?

SFR: I’ve seen one other thing A24 has done, “Hereditary,” which was excellent. And I’ve been a Bo Burnham fan for a long time, so I’ve wanted to see “Eighth Grade” and haven’t gotten around to it so this is a good way to do it.

SFR: My only experience is with “Hereditary” and “Eighth Grade,” but there’s an earnest quality to both of these that is lacking elsewhere. Like in the horror genre, for example, there’s a lot of tropes, and pumping movies out because you know you can make money, and “Hereditary” didn’t seem that way, which was refreshing. And neither does “Eighth Grade,” which is a really fresh take on the classic coming-of-age story.

RR: What impact do you think A24’s initiative will have on filmmakers here at Harvard?

SFR: Admittedly, this is coming from someone who has been really unaware or at least unaffiliated with the film community on campus, but I would hope that it would just boost the community and have a positive impact. Anything beyond that, any gained traction, would be even better. This isn’t an A24 appreciation club, this is A24 at Harvard, and I think that lends it a lot of weight, and that will get people more interested. It’s the same “we actually give a shit quality” that makes their movies so refreshing.