Better Ways to Spend $200 Than on Man of the Year 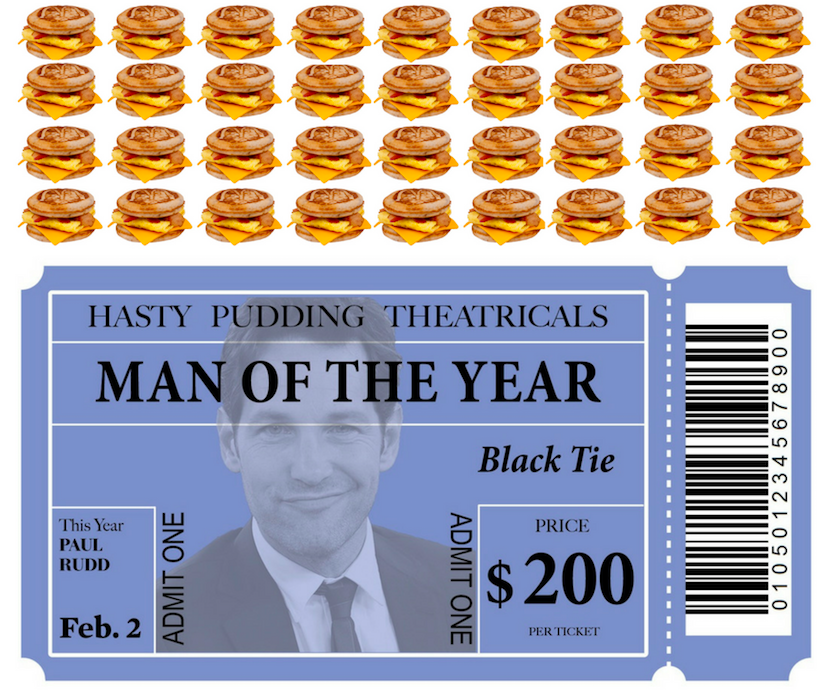 The theatrical demigod known as the Hasty Pudding tacked a $200 price tag onto seeing your classmates roast Paul Rudd. Now, we love Paul Rudd, but $200 is insane, especially because we all forget the Pudding exists for eleven-and-a-half months of the year. The primarily-male organization has long prided itself on its inclusivity and ability to attract viewers who were given tickets for free. But if you are a student who enjoys spending money on things that are reasonably priced, we have created a list of other ways you can spend $200.

Now, you may be thinking, “Nick, I can’t watch a sausage McGriddle give Paul Rudd an award!” And you’re right. But has watching Paul Rudd receive an award ever satisfied your hunger, or enhanced your life to any degree at all? No. I’m honestly just craving a McGriddle right now. Moving on.

A Donation to Women's Project Theater

WP Theater is a company exclusively devoted to supporting the work of female-identified and transgender theater artists and has helped launch dozens of your favorite female theater artists. They’re always accepting donations. It may be weird to know that there is an organization out there that is...y’know...supportive of diversity, but we can assure you that there is!

A quick eBay search taught me that you can buy one of the most iconic images in comedic film history with Paul Rudd’s autograph for $50. With it, you can lie to your family saying that you went to the Pudding roast, met him, and got him to sign a picture for you. They will then ask you what the Pudding is, and you can promptly walk away.

Given the very inclusive nature of the Pudding, the fact that it values Mila Kunis’s presence at a third of the cost of Paul Rudd’s is absolutely shocking. Moreover, at the reasonable-but-still-not-really-reasonable price point of $80, an attendant is still not given the privilege of wearing a suit and tie to sit down for an hour—a requirement for Rudd’s presentation. We don’t know who decided that Kunis ought to be priced so far below Rudd, but we can only assume that they got a C in EC1010a.

A Ticket to an Actual Show on Broadway

Believe it or not, tickets to Broadway shows not named Hamilton or Dear Evan Hansen are cheaper than tickets to the Pudding’s event. Factoring in the cost of a Greyhound bus and an aforementioned McGriddle in case you get hungry, you could feasibly take a bus to New York, watch The Book of Mormon on Broadway, and be back in your room in the evening for less than the cost of a ticket to the Hasty Pudding. But hey, there’s a parade where you can kind-of sort-of see Paul Rudd for fifteen seconds and take a blurry picture for your Snapchat instead.

Don’t let these proposals deter you from buying a ticket to the Pudding’s presentation. If you enjoy making bad decisions, go right ahead. Just know that a belly of McDonald’s is available at a fraction of the cost.