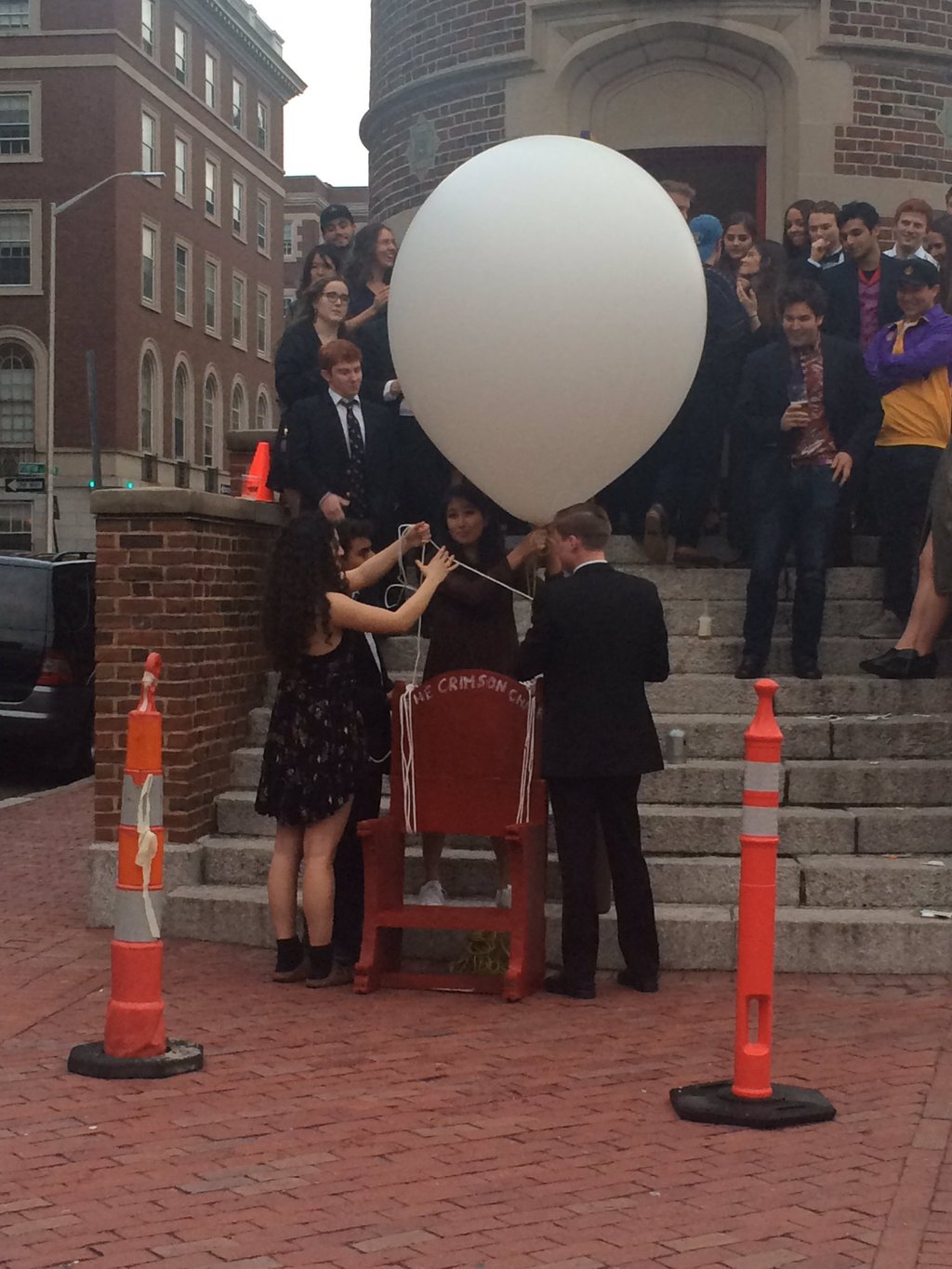 How many 'Poonsters does it take to hold a balloon?

This Saturday, just after 7 p.m., members of a certain a semi-secret Sorrento Square social organization that used to occasionally publish a so-called humor magazine made a feeble, short-lived attempt at humor. Earlier today, Lampoon staffers sent emails over club and House lists announcing that the Crimson president’s chair would “depart on its eternal journey into Space.” This was to be the latest in a long history of pranks between the two organizations, including most recently the Lampoon’s duping of Donald Trump.

How many 'Poonsters does it take to hold a balloon? By Eva S. Monroe

Ever-fascinated by new advances in space exploration, we at Flyby braved the cold with high hopes of seeing new breakthroughs in chair-launching technology—or at least, a mildly amusing prank. Unfortunately, we were met with neither.

Arriving at the Lampoon’s castle at 6:45 sharp, per the email’s instructions, we joined a crowd of fellow Crimson writers. Even Crimson president Mariel A. Klein ’17 was present, decked out in purple and yellow—the Lampoon’s colors—in anticipation of the big event.

Unfortunately, except for the Crimson squad, turnout appeared to be quite low. The small crowd huddled between Mt. Auburn and Bow Street didn’t appear to be much larger than the membership of the Lampoon. (Perhaps there will be a larger turnout at the Lampoon’s “Farewell Chair” open party tonight at 11 p.m., when people can drink until the Lampoon actually seems funny...)

After about 10 cold minutes, a few dressed-up Lampoon members came forward and began to inflate a large white balloon. We pulled out our phones to begin frantically live-tweeting, only to realize that we would be forced to wait another 10 minutes or so for the actual prank to begin while the ’Poonsters struggled to tie the balloon to a poor imitation of the Crimson’s chair.

After much fanfare and anticipation (and with the balloon finally secured to the chair), the Lampoon set the chair free, watching as it drifted toward space.

Just kidding—the balloon, like the ’Poonsters' future careers in comedy, failed to launch. Only after a member picked up the "chair" and threw it, narrowly missing a car and breaking the chair in half, did the balloon finally escape toward a better place.

All in all, we weren’t surprised that the Lampoon’s prank was a waste of time and not funny, though we do hope they’ll step up their game for the next round of pranks, to prove that they aren’t just full of hot air.