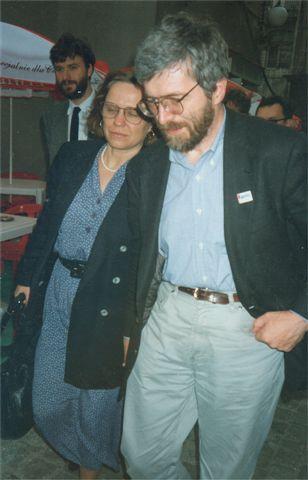 This week's Crimson Arts cover story is about Polish poet and Harvard professor Stanislaw Baranczak. The piece focuses on Baranczak's careful negotiation of his political responsibilities to his country and his own desire to write for writing's sake. Here's a poem by Baranczak that didn't make it into the article but is still worth a read:

In an empty suburban parking lot, setting the hand brake,

he wonders what it actually was that brought him here

and why on earth he was never able not to succumb

to the clichés of sorrow, familiar to all who practice

the invisible craft of exile. There always will be a homeland

of asphalt under the chilly streetlamps, a homeland of rusty crossties

under a pair of rails, which likewise can count on meeting

in infinity only; a homeland that comes along and apart,

that rushes forward with him in the canyons of floorboard cracks

and lights in strangers’ windows, and his veins, and trajectories

of galactic explosion. What is it that still holds him here,

pins him down, encloses him in the circumference

of this and not another skin, planet, suburban parking lot.

And whence this arrogated, arrogant right to exile,

on his own Earth. There will be a homeland somewhere: an involuntarily chosen

second of awakening in motion, in the middle of a breathless whisper

a comma place by chance, by mistake, for the time being, forever.

If you want even more Polish poetry, here is my favorite of Nobel-prize winning author Czeslaw Milosz's many poems. ("I did not want to love so" is inscribed in the original Polish on one of my notebooks.) Here Milosz, 30 years prior to Baranczak's rise to prominence, reflects on his role as a Polish public intellectual,grappling with a dilemma similar to what Baranczak would later face.