A Tale of Two Cities and a Soccer Match 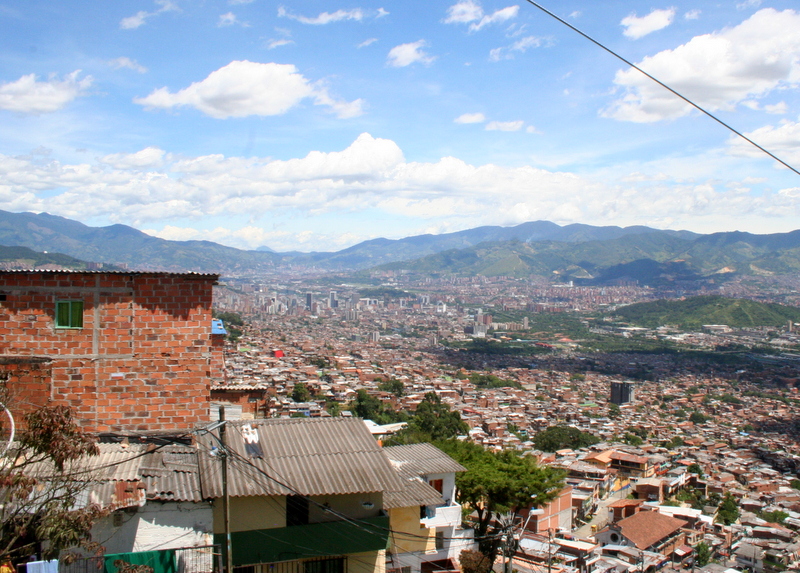 Viewing the South of Medellín from the North
By Michael C. George

MEDELLÍN, Colombia—I had been aware that a soccer match was going on. As I sat stuck in game-induced bumper-to-bumper traffic on the way to dinner, people overflowed the streets as they watched the game in bars or on the sidewalk using portable televisions with rusting metal antennas. But the huge number of people should have made me realize that this was actually the soccer match - Nacional, Medellín’s soccer team, was playing Bogotá’s Santa Fe, in the national championships.

At dinner, our conversation was regularly punctuated by cries of local supporters. Soon, however, the people at the small hole-in-the-wall diner next door erupted into cheers: the final score was 2-0. “Somos campeones, otra vez,” they chanted. “We are the champions, once again!”

As we walked back towards the park at the center of Parque Lleras, the city’s nightlife district, a roar filled the air. It was only when we rounded the corner that we saw that we had walked right into the madhouse: several thousand people had descended upon the park like a tsunami of green and white—jumping, chanting, and lighting fireworks in a street packed as tightly as sardines. With cries of “un limpio, un limpio!” (“He’s clean!”), people with spray cans of foam and bags of flour were dousing fellow revelers until the air was snow white.

At first, we dodged the flour missiles and foam projectiles as best as we could, but it immediately became clear it would be impossible to emerge unscathed—at one point, a man threw a bag of flour directly into my (unfortunately) open mouth, forcing me to participate in a doughy version of the cinnamon challenge. So, after buying a spray can of foam from a man in the street, we joined in.

As I sit here writing this article a week later, with just a few days left in Colombia, the image of thousands of cheering fans remains etched in my mind. The people of Medellín, in general, are proud of their city, and rightly so. Earlier this summer, I called Medellín a “city transformed,” and it is: every day, its gleaming metro ferries people across the city with an efficiency unrivaled by Boston’s T. The city’s investment of millions in poor districts building new transportation networks, libraries, parks, and schools has demonstrated the power of urban renewal. A Brazilian Bolsa Familia-style cash grant system helps the poor afford basic necessities. With Pablo Escobar now two decades in the past, violence—while still high—has dropped, with an 84 percent decrease in the murder rate since the end of his reign.

Yet, every day, that same silver, shining metro exhales me out of the richer, foreigner-dominated south into the poorer, more dangerous, dirtier north where I work, only to breathe me back into the South’s cool safety every evening. Last year, my neighborhood, el Poblado, had just three “disappearances” and a murder rate of 5.6 per 100,000, compared to 58 and 173, respectively, for la Candeleria next door—a metro stop I have been warned never to use at night. Medellín is a city transformed, but also a city of daunting inequality, where shopping malls with touchscreen “You are here” maps, luxury apartments, beautiful parks, and artisanal coffee shops co-exist minutes away from impoverished slums and graffiti-ed streets. As the metro whisks me past la Candeleria, across the invisible border marking the division between north and south, it often seems as if I live in two different cities.

That night in Parque Lleras, we emerged an hour later covered in white from head to toe, surrounded by people drunk on their city’s win. For once, the entire city, north and south, seemed united: everyone was clad in green and white, everyone was absurdly covered in flour. It took Nacional beating Santa Fe 2 to 0 for me to see this divided city brought together, a reminder that much work remains to be done, even in a city that has moved so far beyond its past.

Eventually, I found a taxi and settled in for the ride home, lost in my thoughts as we sat in the traffic caused by a group of teenagers standing in the middle of the road, waving a giant green and white Nacional flag. They must be doing something right, I thought, in a country where three out of four people describe themselves as happy, a figure that makes Colombia the happiest country in the world.

I was brought out of my reverie when my driver—also wearing green and white—rolled down his window and started honking in celebration, before waving to the policeman on the motorcycle in the lane over.

“Hey,” he shouted in Spanish, “check out at this gringo covered in flour messing up my car!”

Laughing, the policeman honked back.