As important as Steve Moundou-Missi's arm was in the final seconds of the Ivy League playoff game, his head was just as vital. 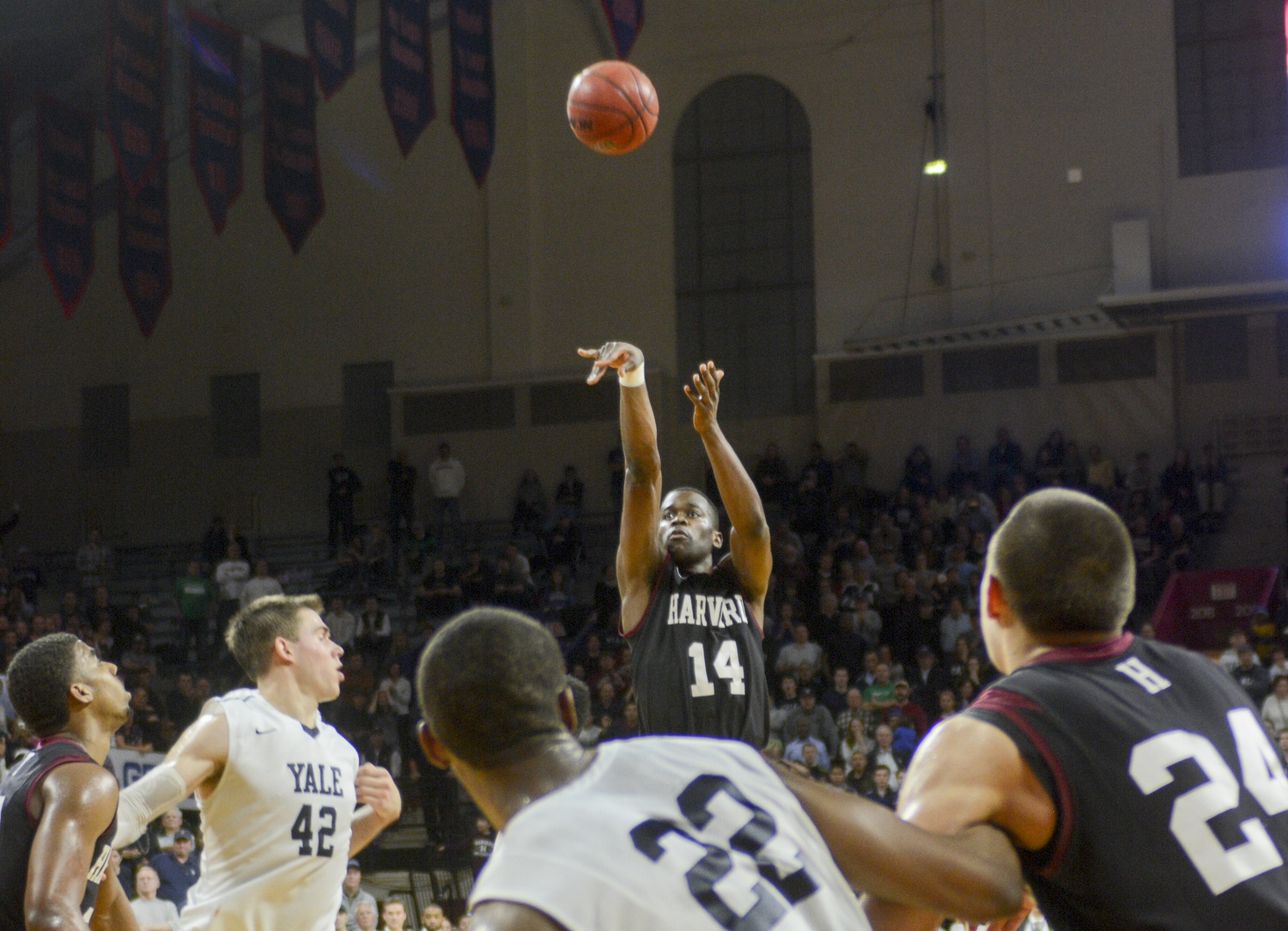 This column is going to get a little vague and philosophical. It will be interesting, maybe even insightful, but not necessarily compelling. So let’s start small, as small as we can get. Let’s start with the flick of the wrist—co-captain Steve Moundou-Missi’s wrist, to be specific.

That wrist sent the Harvard men’s basketball team (22-7, 11-3 Ivy League) dancing Saturday when Moundou-Missi hit the game-winning shot with seven seconds left in the Ivy League Playoff game against Yale. As important as the forward’s arm was in that moment, his head was just as vital.

Seconds before, Moundou-Missi had missed a potential go-ahead shot from his favorite spot on the floor, along the baseline to the left of the basket. In what Crimson coach Tommy Amaker called a “nailbiter” of a game, Moundou-Missi literally bit his thumb in frustration at the miss. When he released that shot, he thought it was going in. It rimmed out. A long review to determine whom the rebound caromed off of gave Moundou-Missi even more time to think about the ramifications of his miss.

To understand what happened next, you have to go back three months to the nadir of Harvard’s season and maybe Moundou-Missi’s career.

Remember, the Crimson entered this year ranked in the top-25, with ESPN listing two of its players among the best in the country. There was talk of at-large bids and Harvard being the best mid-major program in the country. All of that talk was gone by the end of December, as was Moundou-Missi’s jumper, evidently.

The forward shot just 26 percent during that month, including a stretch when he shot a combined 6-for-34 against Vermont, Boston University, Virginia, and Arizona State.

“Obviously the month of December was really tough,” Moundou-Missi said Monday before the team left for Jacksonville, Fla., where it will face North Carolina Thursday in the NCAA Tournament.

It was hard for the whole team, which shot 38.2 percent for the month. Harvard averaged 15 fewer points than it had in November, when it played easier competition. It lost its fifth game on Jan. 24 after losing five games all of last year.

In January, Moundou-Missi took 2.4 fewer shots per game and he went to the free throw line less than half as much as he did in December, signs of a waning confidence. He needed a pep talk and those around him saw it.

“The more you take it, the more you make it,” sophomore Corbin Miller told Moundou-Missi in one of those moments.

“Shoot the ball when you’re open,” Amaker consistently implored him.

Moundou-Missi shot the ball when he was open Saturday. It went in. The crowd stormed the court. The players celebrated. And later, a reporter (not me, I swear) asked Amaker a question at the post-game press conference:

“Do you feel like this team has had to carry the weight of this program’s success?”

Amaker responded: “Yeah, I think that’s a great statement and analysis of our program.”

You could see this team grapple with that weight early in the year. At a press conference earlier this season, senior Wesley Saunders rattled off all of the great leaders he’s played with. There was Oliver McNally ’13 and Keith Wright ’13 when he was a freshman, now-assistant coach Christian Webster ’14 when he was a sophomore, and Laurent Rivard ’14, Kyle Casey ’13-’14, and Brandyn Curry ’13-’14 last season.

When Saunders was done speaking, someone in the room (not me, again, I promise) chimed in: I guess you guys are the leaders now, huh?

He took a second, smiled and responded, “Yeah, I guess so.”

The seniors might have struggled with their new leadership duties early in the year, but they found them in time. After the loss to Dartmouth, senior Jonah Travis and his classmates spoke vigorously to the other players in closed team meetings, and Moundou-Missi, Saunders, and others could often be seen instructing and encouraging teammates during timeouts by the end of the year. Quiet players in past years, they became the heart of the team. Players like freshman Andre Chatfield will now rattle off their names in the years to come.

Moundou-Missi got his form back too. In February, his shots per game went back to its normal average and he made nearly twice as many as he did in December. He starting drawing more fouls again. In March, he looked even better, jumping up to 13 shots per game and 13 points per game.

Throughout the month of February, when the Crimson went 7-1, Amaker always talked about how his team was improving and gelling.

“I think you’ve seen the growth in all of our players within our program,” he said, “And Steve has embodied that as much as anyone.”

Moundou-Missi, for his part, credited his teammates for keeping him confident.

“They really trust me with that outside shot and really trust me to take and make those shots,” he said. “I really feed off those guys so I’m really thankful for my team.”

And this is where I’d like to get a little philosophical, if you do not mind.

We writers like to write a lot about games and numbers. It’s really a tendency all newspeople have. We cover the unveiling of bridges when what’s really happening is the building of the thing. And in basketball, we cover games, which is really just a reflection of how good a team is. Just like a doctor might look at the readouts during a check-up, it’s only a quantification of a snapshot.

Games are what people are interested in, sure, but they are not necessarily the most important part of a team’s storyline. And that’s particularly the case this year. Look at the list of games and what do you see? A bunch of W’s and L’s. I’ll even let you read the recaps for the games. It’s still just seems random. But it’s not.

Amaker knows this. All year he’s been talking about improving, the type of present participle that streams from coaches’ mouths but must get dammed somewhere before making it into print. He’s a process-over-results guy, like most coaches. And this year, the process was more interesting than the results—how Moundou-Missi went from where he was in December to the decision to take the game-winning shot, and make it, Saturday.

Amaker and his players never lost sight of the their goal of growth. Through wins and losses, they always worked to get better. The coach knew all along that would lead to good results.

“I like that about our ball club, that we’re still working to improve,” Amaker said after a game earlier this season. “If teams can adopt that mentality and that attitude, I like to think there really are good things in store.”

—Staff writer Jacob D.H. Feldman can be reached at jacob.feldman@thecrimson.com.