One Final Test: Pre-Tournament Reflections on the Men's Basketball Season 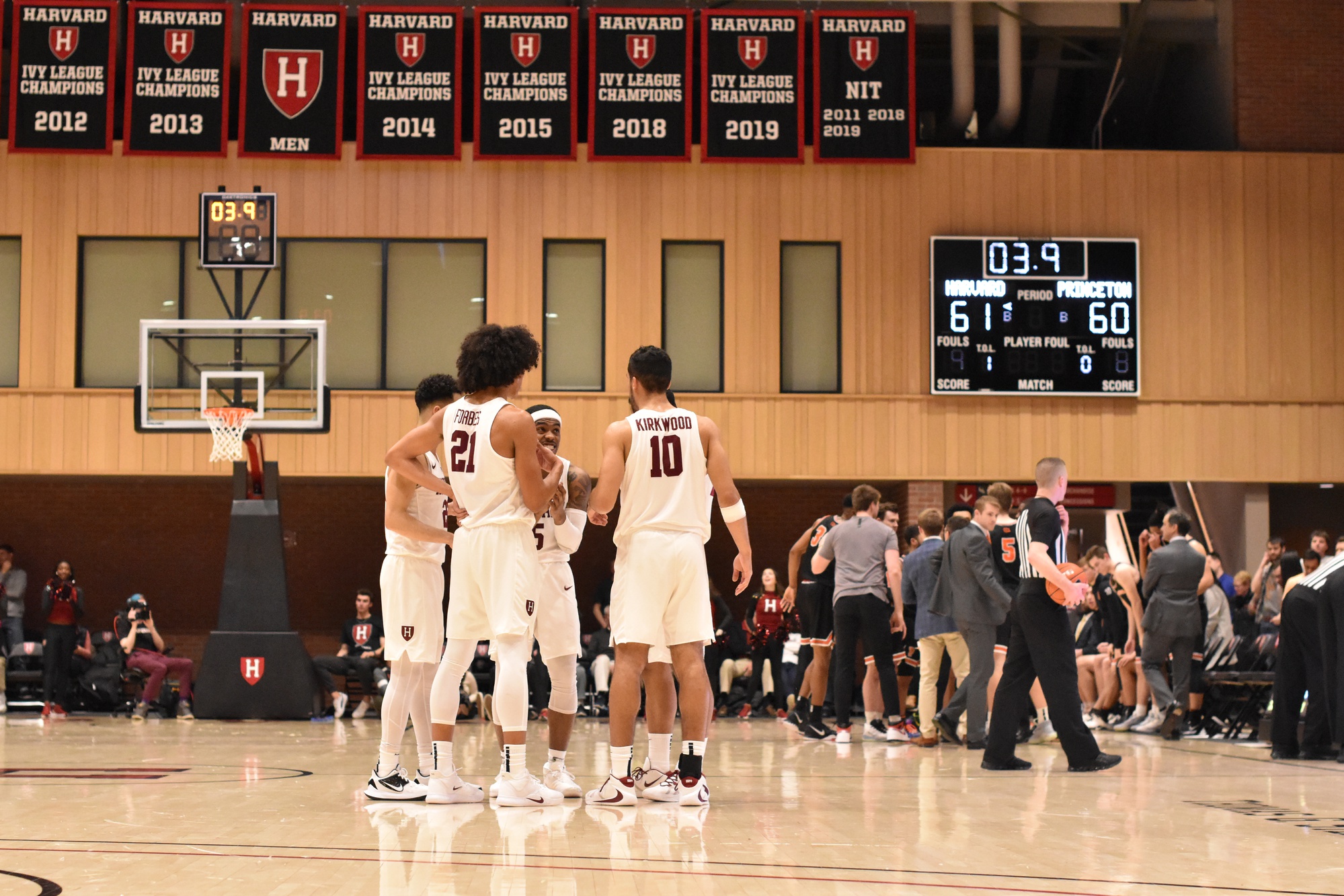 It’s a Saturday night in Ithaca, N.Y., and the Crimson had just let a comfortable 20-point lead splice in half with about six minutes to play. Cornell showed no signs of letting up, persisting with a formidable full-court press.

Frustrated by a slew of turnovers in the prior few minutes, coach Tommy Amaker elected to play five men that few back in October would have expected to be closing out a conference game: Idan Tretout, Rio Haskett, Chris Ledlum, Danilo Djuricic, and Mason Forbes.

It is no understatement that several of the Ancient Eight’s coaches would be tantalized to have such a lineup on their rosters. But for a Harvard team that has been largely molded these past three to four years by what was the tenth best recruiting class of 2016, the symbolism that this lineup imbued could not be more striking.

In the last chapter of the narrative arc of these seniors, it will likely not be individual star power, highlight-reel moments, nor even on-court familiarity that will determine whether they earn the NCAA Tournament berth they have long, long coveted.

Instead, the team must rally around axioms that have long rooted Coach Amaker and the Harvard men’s basketball program: bench and balance, next play and next man up, stay ready so you don’t have to get ready.

These are mantras that have been deeply ingrained in the first-floor locker room at Lavietes Pavilion, so much so that they are reiterated freely upstairs in press conferences and in underground hallways on the road.

To the unaware onlooker, such “Amaker”-isms could be easily brushed off as empty coaching platitudes. But ask any current player or any courtside spectator who can hear the words “Move it” from their coach as Harvard kicks its motion offense in gear, and it is clear that this team has never been about the Zion-esque jaw-droppers, the Harden-esque hero-ball, nor the Lillard-esque logo threes that fill up one’s Instagram these days.

Rather, this team — now more than ever with Seth Towns, Bryce Aiken, and Christian Juzang seemingly having logged their last minutes in a Crimson uniform — will need to play the type of selfless and principled basketball that rewards collective play over individual flair to cement the legacies of the star-laden senior class.

It may not be the most enthralling form of basketball, but as Coach Amaker stated recently, the program has always emphasized ‘substance’ rather than just ‘style’.

This is in no way to diminish the personal accomplishments of these seniors: Chris Lewis will graduate as Harvard’s all-time shot blocker and the ‘inside-out’ glue guy, Aiken will be remembered as a near-unstoppable clutch player in late-game situations, Towns will forever be called an Ivy League Player of the Year. Amaker has made no secret in anointing Bassey as the ‘heart & soul’ of the team and Juzang as the ‘quarterback’. Team ‘energizer’ Rob Baker always seems one block away from lifting up Lavietes, while Henry Welsh has earned an entire team’s trust as a co-captain.

But in many ways, what will be expected of these seniors in the final week of the season — injured and healthy alike — will be a challenge unlike any other: how to contribute positively to a team whose ultimate postseason ceiling may very well be determined by their understudies.

To beat a Yale or a Princeton a second or third time, there is only so much that Lewis can do in the post or that Bassey and Baker can do on the wings. All Crimson supporters would revel to see a huge game from that trio. But as the past three weeks have shown, it has been collective team play, spiced in with sparks from Noah Kirkwood (Penn), Mason Forbes (Princeton), Rio Haskett (Columbia), and Chris Ledlum (Columbia) that have propelled Harvard to six straight victories.

Those contests, including the ending to the Cornell game this past weekend, have all offered glimpses to the Crimson identity after this season. Pre-emptive questions also seem clear: Who will take over the point guard responsibilities with no natural healthy player at the position currently? Who will be Harvard’s lockdown defenders, particularly in guarding the shifty scorers that every team seems to be recruiting in recent years?

These questions of course do not need to be resolved immediately, but it does open up a tremendous opportunity for the ‘understudies’ to send a message. As much as the team will rely on these seniors and celebrate their accomplishments, now is also the time for the next impending era of Harvard Basketball to be tested.

That test will come in two weeks in the Ivy League Tournament, on a court in which the Crimson has not lost this entire season — its own. At the bare minimum, one and likely more than one of those non-seniors will need to contribute in an important way to make it past the weekend.

Equally however, it will be a different type of test for this heralded senior class: the raw talent or physical prowess that they came in as freshman with must be matched with an equal willingness to organize, lead, and galvanize the roster they will soon hand over.

NCAA Tournament berth aside, that responsibility may be a surprising but ultimately most endearing legacy for these seniors.