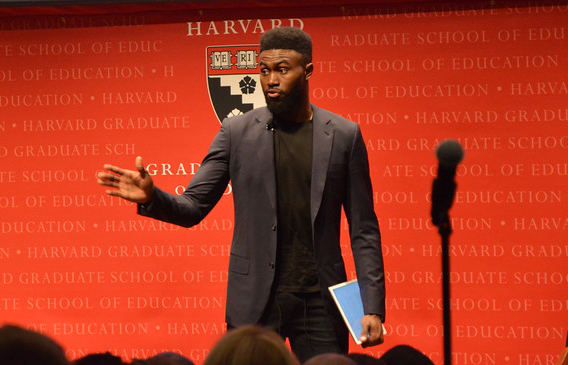 Celtics second-year wing Jaylen Brown spoke in front of a packed crowd at the Harvard Graduate School of Education on March 1. By Henry Zhu
By Eliel Ig-Izevbekhai, Contributing Writer

When eighteen-year-old Jaylen Brown was considering what college to attend, he had offers from the perennial basketball powerhouses. Kansas, North Carolina, UCLA, Kentucky, and Michigan all flooded the then five-star recruit and now star Celtics small forward’s house with recruitment letters. Like most recruits, Brown considered many factors. He weighed his compatibility with the coach, location, his potential NBA prospects, but above all else: academics.

With offers from some of the most storied programs in college basketball history, Brown surprised many by selecting University of California, Berkeley. In a visit and discussion at Harvard Graduate School of Education last Thursday, the Celtics star spoke on his time at the University.

“My best experience was just taking classes there,” Brown said. “The basketball was whatever it was. The chips fall into place, but the educational experience I had at Cal, second to none.”

Education was the topic echoed throughout Brown’s talk. Whether it was his educational experience at Cal, the stratified educational system of the United States, or his growing relationship with Harvard University, Brown stressed the importance of quality education.

Once said to be “too smart for basketball,” he is now a living example of the fact that worlds of sports and education do not need to be mutually exclusive. Brown, a chess player and multilingual speaker, has been cultivating his intellectual interests, despite his NBA commitments.

One of these interests has been affecting the lives of young athletes just like his eighteen-year-old self, causing Brown to become heavily engrossed in the world of Harvard basketball.

Brown has made connections to several team members and has even faced off against players on the team, including a match with sophomore forward Seth Towns. He has done all this while stressing the importance of education and the platform that sports can offer.

“I talked to Tommy [Amaker] a few times,” Brown said. “He actually invited me on campus for some recruitment stuff and I came up to the school to play some open gym.

Brown and coach Tommy Amaker have created a bond over the past few years over their common goal of building up student-athletes as well as Harvard basketball. In 2016, The Celtics forward was involved in the recruitment of 5-star recruit Wendell Carter.

Brown and Carter hail from the same area, which created a connection between him and Carter’s family. The Celtics star advised the number five player in the class of 2017 to consider attending Harvard, citing his recruitment experience and the importance of education.

“At the end of the day, basketball is basketball,” Brown said. “You’ve got a whole life to live. So I said Harvard, I would love to see that,” Brown said. “I would love to see somebody coming from where I’m from [and] do that. If I could do it over again, I probably would have still went to [Cal] Berkeley but I would have at least considered Harvard because that’s a great school, that’s a great brand that’s attached to him, so I want him to do what’s best for him. But selfishly, I’d like to see him go to Harvard.’’

Harvard was one of the final four schools in the highly touted recruit’s decision. Though, he ultimately chose Duke university, Carter’s consideration of Harvard is a sign of things to come for the basketball program as a result of Brown’s support.

The Celtics small forward spoke last Thursday about athlete platforms, saying that he wishes to use his platform for a purpose. He may have found this purpose through his connection to the Harvard basketball program: recruiting student-athletes to enrich their educational journey as well as their basketball skills.

Hopefully this connection will grow, as Brown plans to take classes at Harvard while continuing his NBA career, citing the power of such a combination.

“I think there is a lot of power in that,” Brown said. “Such a prestigious university, having someone of such basketball stature and just combining the two. Sports and education, I think they overlap.”