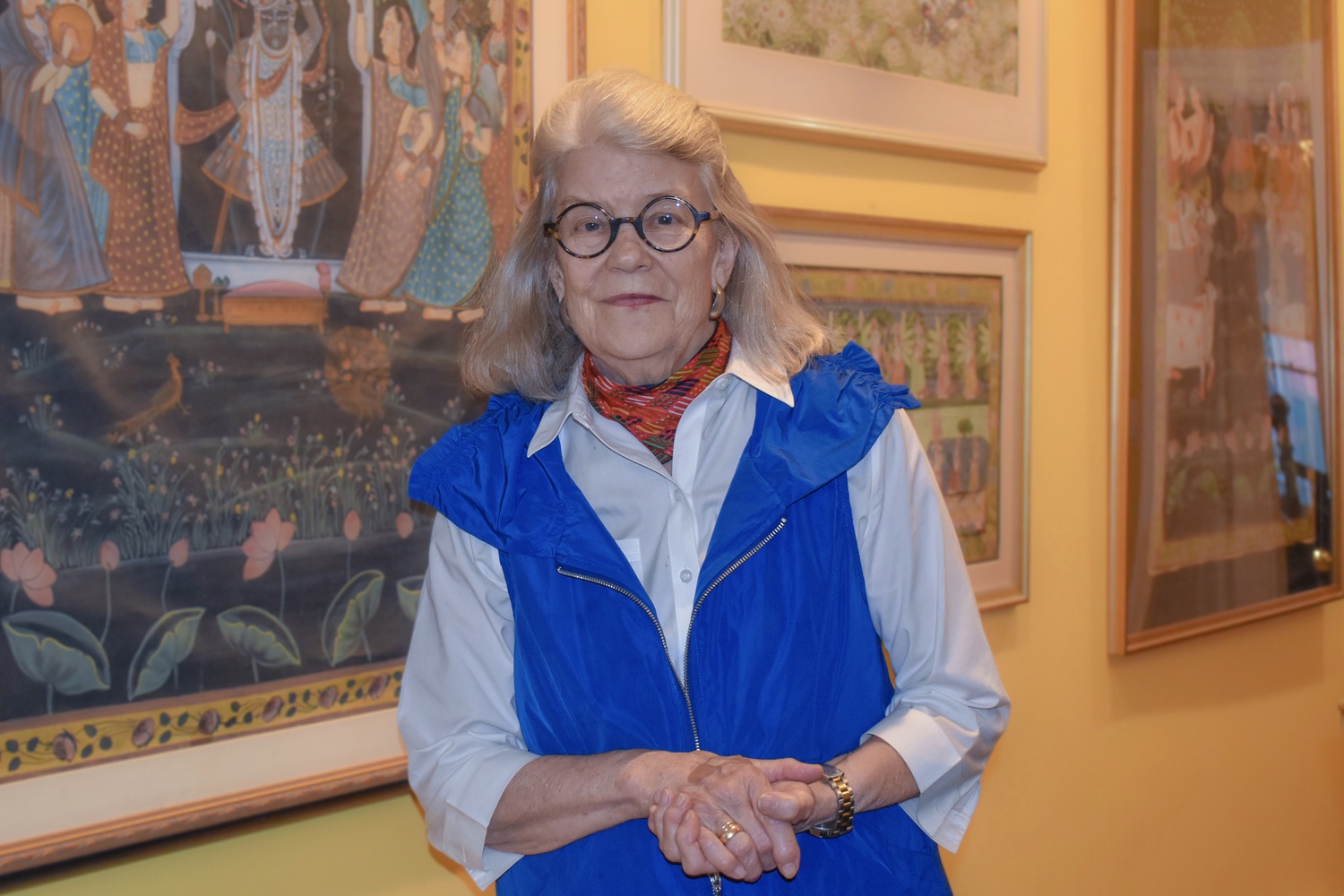 The Comparative Religion professor sat down to discuss religious pluralism in the United States as well as on Harvard’s campus. “It is not the godless Harvard that people used to speak of, in the old days,” she says.
By Akila V. Muthukumar

Diana L. Eck, Professor of Comparative Religion and Indian Studies, served as Lowell’s Faculty Dean alongside her wife Dorothy A. Austin for 20 years. She currently resides right off a busy Cambridge intersection, in a cozy two-story home brimming with books and her two roaming cats. This interview has been edited for length and clarity.

FM: You last spoke to FM in 2011. What are some of the biggest shifts you’ve seen in religious diversity around you since then?

DLE: If I’m looking at the wider United States, I think religious diversity has just continued to grow. And I think that’s probably true at Harvard as well. At Harvard, we have a dynamic Islamic community, a Hindu community – it’s been a few years since I’ve hosted Diwali at the Faculty Deans’ residence at Lowell House, but it was always hugely attended: piles of shoes at the front door and at the back door, and no furniture at all; the altar set up in the living room, fireplace, and everyone crowded in elbow to elbow.

It is not the godless Harvard that people used to speak of, in the old days. It’s one in which there is a lot of religious life and also just a lot of cultural life that is not particularly religious.

FM: You launched the Pluralism Project in 1991 to study the changing religious landscape in the United States. What has been the most fulfilling part of the project thus far?

DLE: The most rewarding part of this has been to look over the long haul and look at some of the challenges that have been developing in just about every aspect of American public life, whether it’s in hospitals, or city councils, or public schools, or colleges and universities, even corporations, where they have a much more religiously diverse clientele, student, body, citizenry, whatever, and need to think about policies and programs that are workable in this kind of environment. What we have done is to write case studies that are a bit like the ones they use at Harvard Business School. They have a protagonist — someone in the city council, or in the mayor’s office, or maybe the mayor himself — who needs to think about a new dilemma.

FM: Are there any interviews for these case studies you conducted that stand out to you?

DLE: A lot of my writing is interview-based. In terms of the actual case studies, most of them have been written by my Senior Researcher, Elinor Pierce, who is brilliant, both as a researcher and also as a writer, and extremely careful and respectful of the people she talks to. She’s been a real boon.

FM: At Harvard, there have been tensions between students and some faith-based organizations because of accusations about discrimation and homophobia that is perpetuated or justified by religion. How would you suggest students approach these types of conversations?

DLE: Now, I fully admit that there are Christian perspectives that have been and still are condemnatory of homosexual practice. I think it is not only a problem because it is so exclusive, but I think it’s theologically wrong. There are a lot of Christian bodies, including the church I go to, that are explicitly welcoming of gay and lesbian people and whose theology is based not on judgment, but on justice and on love. People need a context in which to explore sexual identity and Christianity. It can be academic or personal, but it needs to go beyond simply complaining or accusations.

FM: How can we seek to understand other religions?

DLE: There’s a bright thread running through most of them that really prioritizes relationship and love and human dignity and equality. It might be in relation to the diversity of religious traditions: is it important that my religion is true, exclusive of yours? What does it mean for religion to be true? Where does that truth reside? Is it somewhere in the sky? Or is it in the human heart?

FM: What role do these conversations about understanding other religions have on a college campus?

DLE: There are fairly robust interfaith communities where people actually get together and talk about tough issues. [At Harvard], the Interfaith Forum goes on year after year. You don’t have to wait for an enthusiastic group of students to reinvent it. That’s a pretty good sign. But there are a lot of people for whom going to something like that is not their cup of tea. The way in which they learn the most is their freshman roommates, their friend group. Diversity is sort of the life you live; it’s not necessarily something you go to.

FM: How would you describe how fully you have to engage with a different religion in a close relationship?

DLE: A close relationship with someone of a different religious or cultural tradition requires some knowledge, requires some work. Tolerance won’t take you very far when it comes to the tough issues of life. You need a mutual sense of how much family matters because it could be that the two of you are fine, but marriage isn’t simply something that has two people in it. Families get conjoined in weddings.

FM: How do you bridge these gaps from your own personal background and identity to working with people who are different?

DLE: I did grow up Christian. It was a church that really was based more on loving relationships and a real concern for social justice. So we did a lot of things that were very much part of working across what you might call cultural boundaries.

I decided to take this opportunity to do a junior year in India and went to Banaras Hindu University. It was a pretty big transition. I learned a huge amount there. And it was really that experience that drove me into the comparative study of religion.

FM: From Montana to India to Cambridge, what has been your favorite place to live?

DLE: I like them all. I love Montana. My mother died a few years ago, and I’ve had to deal with her home. I spent one week out there this summer with people I’ve known most of my life. There’s a lot that is grounded in that kind of place, where your roots are so very deep. But I don’t live there now. And I’m not likely to go back and live there.

FM: What do you miss most about living in Lowell?

DLE: The Faculty Deans’ residence is connected just a few steps from the dining hall. I’m sort of a late-night person. I get a cup of coffee or cocoa or something late at night to see people working and have a chance just to talk for a few minutes. I liked the fact that I could deal with folks in the kitchen and servery staff, as well as the landscaping people because we had a nice little garden in the back, and I used to get down on my knees and plant things every springtime.

FM: In 2008, Lowell returned its bells to their original home in a Moscow monastery in exchange for a replica set. Could you tell me more about the bells’ return?

DLE: We went up to the bell tower to see these famous bells, and then we realized that they were covered with icons, and it made sense that they were seen as national treasures in Russia.

It was really interesting going to Russia to visit foundries, trudging around different parts of Russia where they had started making bells again, and negotiating a deal. Then they [the Russians] came and made sort of pink rubber castings of all the decorative motifs on the bells. They rolled all of that up in their suitcases — we went out to Target with them and bought suitcases — took them back to Russia, and created a set of bells that had these same iconographic features. Eventually those bells were loaded on the ship and came to Boston.

FM: What is something that you feel you’ve learned through quarantine?

DLE: I’ve learned how important the human face is. Dorothy [my wife] has dementia, and it became a little more prominent. She used to be a really great lecturer and teacher and preacher at Memorial Church. Dorothy is someone who really responds to people who she can see, so every time we had only people she couldn’t see [due to masks] it was a little alienating.

FM: How is Dorothy now?

DLE: She was one of those ministers who just loved to stand at the door of the church and hug people as they went out. So all of that was lost, really. But she’s dealing with her life with a lot of dignity. And I think she realizes how much she’s lost — you can’t undergo this kind of diminishment of your ability to speak and to move about freely and whatnot, without some inner comprehension of that.

FM: You’re known to be a regular at Lowell’s Poemicals. What’s your favorite poem?

DLE: One of the Four Quartets of T.S. Eliot. It’s called “Little Gidding.”

FM: What is your favorite part about having cats?

DLE: I love their company. They are lap-sitting cats. When they sit on your lap and purr, it’s like nothing else in the world. I will reveal another personal story about this, which is that my least favorite thing about having cats is cleaning their litter box.