‘We Do What We Do in the Dark’ Review: A Sublime Portrayal of Queer Intimacy 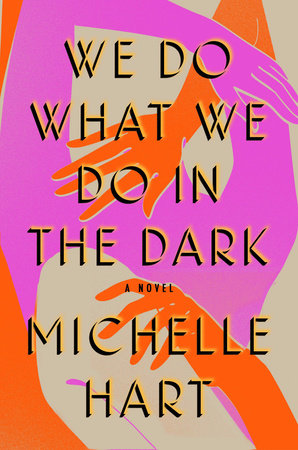 The cover of "What We Do in the Dark" by Michelle Hart. By Courtesy of Riverhead Books
By Nina M. Foster, Crimson Staff Writer

Michelle Hart’s debut novel “We Do What We Do in the Dark” follows Mallory, a first-year in college, as she navigates an affair with an older married woman who teaches at her university. Tactfully written with keen insights into loneliness, lust, and loss, the narrative is a Pride Month must-read.

Hart’s novel excels in its depictions of sexual intimacy between women. These moments are often brief but do not shy away from the intensity of sexual gratification. Hart writes in a way that is both straightforward and incredibly sensual: She avoids unnecessary abstraction, demystifying queer intimacy with detailed accounts of how Mallory pleasures herself and other women.

These euphoric scenes are expertly contrasted with descriptions of the deep sadness that comes with losing a loved one. This juxtaposition, coupled with the novel’s manipulation of time, ensures that the plot is dynamic and engaging. Hart alternates between the past and present to reveal more about Mallory’s family history, namely her mother’s battle with cancer. She captures the protagonist’s complicated grief brilliantly, in a manner that anyone who has gone through a similar situation will find familiar. Mallory remembers her mother’s illness, but more importantly, remembers her resilience and her warmth.

Another wonderfully relatable element of Hart’s novel is her portrayal of the college experience. While not every college graduate may share the experience of having an affair with a professor twice their age, they can certainly commiserate with Mallory’s struggle to find a sense of belonging on campus. At the beginning of the novel, Hart adopts the quintessential first-year mindset, flawlessly articulating the exciting potential for social growth that one feels when they first arrive on campus, as well as the disappointing realization that finding the right people is a challenging task. It is only over time that Mallory expands her social circle beyond her roommate and discovers a feeling of security — a comforting arc which many upperclassmen and college graduates can attest to.

The plot of “We Do What We Do in the Dark” is driven primarily by character interactions and relationships. Hart devotes little time to worldbuilding, but what she lacks in setting description she makes up for with a sharp focus on her characters’ personal and private struggles. Most of the relationships in the novel are captivating and have a clear purpose, such as Mallory’s moving friendship with the mother of her childhood best friend. Alas, the relationship upon which the narrative most heavily relies — Mallory’s romance with the professor — falls short.

This relationship feels incredibly one-sided and difficult to become invested in. Although the novel is written from a third-person point of view, it might as well be a first-person narrative. Readers are granted unlimited access to Mallory’s complete and utter infatuation with the older woman; just as much as Mallory wants to be with her, she wants to be her. She dreams of following in the woman’s footsteps, thinks about her constantly, and is concerned with her whereabouts long after the affair comes to an end. Conversely, readers have little access to the other half of the affair. The woman’s name is kept a secret and she exhibits an unsettling coldness when she doesn’t express her affection with the same enthusiasm as Mallory. Their relationship is supposed to serve as the novel’s foundation, but with one character giving so much and the other giving so little, the end product is an underwhelming and confusing romance.

Nevertheless, each relationship in the novel yields growth for Mallory and her partners. Hart creates a space for Mallory to explore her queerness and experience intimacy with different genders without shame. Even at a young age, after kissing a woman she knew in high school, Mallory feels “giddy and electric.” Hart wisely refuses to let homophobia intrude upon the narrative, normalizing queer love and attraction in both public and private settings. Her debut novel is an undeniable success, an elegant coming of age story that gets to the core of what it means to be human.