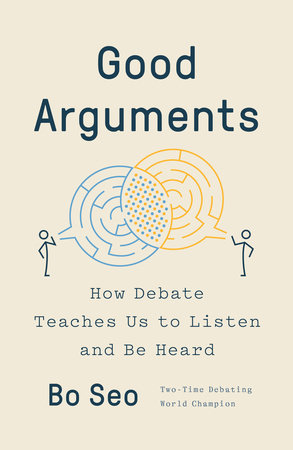 The cover of "Good Arguments" by Bo Seo. By Courtesy of Penguin Press
By Carmine J. Passarella, Crimson Staff Writer

“Good Arguments: How Debate Teaches Us to Listen and Be Heard” is the debut book from two-time world champion debater Bo H. Seo ‘17 HLS ‘24. Seo’s entrance into the literary world is an ambitious and engaging read that is part memoir, part compendium on competitive debate, and part call to action. Seo spends the book’s nine chapters tactfully weaving these elements together into a one-of-a-kind nonfiction work that leaves the reader with fascinating insight into his own worldview and personal development, the high-powered world of debating, and subjects as vast as Ancient Greek pedagogy, the emergence of Lincoln–Douglas debate, and Balinese macaques.

The book is divided into two parts: The first is a presentation of the five components of competitive debate and the skills needed for each. The second applies debate to four core areas of life — bad disagreements, relationships, education, and technology — to show how good arguments can improve both society and the reader’s private life. The aim of the book is not to shy away from disagreements but rather to run towards effective ones, as Seo writes that good arguments can lead to good, helpful disagreements.

One of the book’s many highlights is Seo’s commitment to this central goal. Every personal experience and political or cultural event that he includes informs the substance of the many printed charts, mnemonic devices, and other teaching tools found in the book’s pages. These tools are meant to be handy guides to strengthen the reader’s argumentative acumen, focused on delivering actionable and digestible advice rooted in Seo’s experience and logic.

Seo’s life is the novel’s enchanting backdrop, narrating his transformation from a shy and agreeable elementary schooler to collegiate competitive debater and eventual college graduate and retired debater. Seo reminisces on various playground disputes at his elementary school in Seoul, where he saw the value in argument, and the linguistic and cultural misunderstandings that led to further interpersonal conflict upon his family’s move to Australia when he was eight — experiences that made arguments with peers or teachers seem like more trouble than they were worth, as they often led to hostility and isolation. These childhood years that had conditioned Seo not to engage in argument were not at all indicative of what would soon unfold, as he unassumingly began debating and quickly realized that he quite liked it.

As Seo’s debating career progresses and he wins both the World Schools Debating Championships and the World Universities Debating Championships, he continues to present his life as one spent constantly running towards good arguments. His own personal toolkit thrives and expands as he picks up and effectively deploys various written and oral strategies for crafting better arguments, all of which he is eager to share with the reader, demonstrating how he’s applied them in his own life to help us see how we can do so in ours.

While the desire to engage in better arguments may be the main drive to pick up the novel — and Seo certainly delivers — his own words and stories will likely stay with the reader much longer than any one strategy or tool to recall in times of conflict. And that’s not a bad thing; Seo’s own experiences are very much the lifeblood of the novel, telling a powerful story about immigrating to a new country as a small child, remaining calm under pressure at high-level debate tournaments, finding one’s way socially and academically in college and beyond, and coming to terms with the losses and the inevitable conflicts that are incurred throughout.

By lending so much of his own voice to his novel, rather than simply publishing a how-to guide on formulating good arguments, Seo competently leads by example, proving to the reader time and again how the simple choice of intending to engage in a good argument can lead to more productive and courteous disagreement and debate. If a particular strategy of Seo’s sticks with the reader, that’s all the better. But what is more likely is that focusing on one’s intentions and making the active choice to approach future interpersonal and social conflict from an optimistic, “good arguer” vantage point will do wonders in and of itself. That weighty, humanizing impression will likely sustain itself in the hearts and minds of readers long after precise debate tactics are relegated to the subconscious.

The book should be of particular interest to Harvard students and alumni. Seo has a knack for vivid, grounded thick description that prefers accurate and full portrayals of his undergraduate days to overstated glorification. Even better, his propensity for name-dropping adds a layer of unanticipated relatability to his tales, with the likes of Grendel’s Den, the “twenty-four-hour pharmacy on Massachusetts Avenue,” and the now-defunct Border Café cited as the settings of many of his — and our own — quotidian yet formative collegiate experiences.

Seo’s unwavering commitment to doing the best with what he had throughout his debate career is — to paraphrase anthropologist Barbara Myerhoff — no small potatoes when looking back at one’s life’s work. This message alone makes Seo’s memoir an illuminating read for people of all ages hoping to find some lessons and inspiration within his wonderfully introspective biography. The prospect of learning how to have better arguments in the process? That — to paraphrase Seo — is just pure gravy.

—Staff writer Carmine J. Passarella can be reached at carmine.passarella@thecrimson.com