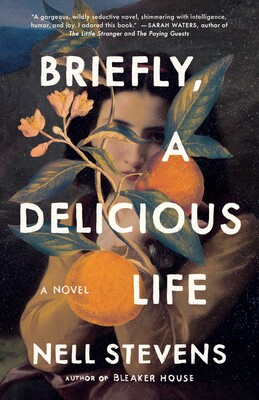 The cover of "Briefly, A Delicious Life" by Nell Stevens. By COURTESY OF SCRIBNER
By Kelsey S. Mann, Crimson Staff Writer

Nell Stevens’s debut novel “Briefly, A Delicious Life” is undeniably imaginative, but a cornucopia of creativity cannot make up for several large-scale drawbacks. After several successful short stories and memoirs, Stevens’s’ novel definitely makes a splash — or tries to at least. The historical fiction lesbian romance ghost story bites off more than it can chew and ends up failing to do anything successfully. The plot somehow both meanders and stagnates, the characters have little development, the adolescence of the narrator makes the narrative feel juvenile, and the historical component reads like a quasi-forgotten interlude. The concept is compelling but would have been better suited for a short story.

The biggest issue with this book is that it simply tries to do too much at once. The premise — even the summarized version on the back cover —is intricate and somewhat nonsensical: A 14-year-old 15th century ghost, Blanca, haunts an abandoned monastery on the tiny Spanish island of Mallorca and, 400 years after her death, falls in love with one of the monastery’s living residents. The object of Blanca’s affection just so happens to be one of the most notable writers of the Romantic Era, George Sands, who is accompanied by her two children and her lover Frédéric Chopin. The book follows several storylines and thought avenues: the story of Blanca’s life and death, her undead existence pre-George, her exploration of her sexuality, the current state of affairs in the monastery, and George’s life pre and post monastery.

For most of the book, there is a somewhat consistent cadence of alternating from Blanca’s past, the present, and George’s past, but about 80% of the way through the book there is a clunky, awkward interlude where Blanca is supposedly “looking into” George and her family’s futures and sharing it with the reader. This section felt like Stevens forgot that these characters are based on fact and wrote a long, somewhat artistic synopsis of the information available on George Sands’s Wikipedia page to put this book back on its historical fiction track.

And this Wikipedia-esque addition towards the end of the book is the beginning of an anticlimactic conclusion to the novel. Because Stevens begins to rely heavily on the lives of the real characters, the book ends the way anyone that so much as Googled Sands once would expect it to — the ending so closely follows the real lives of her characters that it comes off as unoriginal. Not only was this ending disappointing, it also feels lazy, as if Stevens ran out of steam after a whirlwind of the first 220 pages and simply could not think of a faster way to wrap the book up.

Not only do the real lives of Stevens’’s characters serve as a crutch, they also create a serious hindrance for the scope of the novel. Because the narrator is a ghost, there is only but so much that can occur between Bianca and her living companions. And because Stevens sticks relatively closely to the course of her characters real lives, her creativity only has so much space to roam. Stevens spends most of her time telling the readers what her characters do, rather than showing us who her characters become, which ends in the characters not becoming much of anything at all. With both of these firm constraints on the scope of the book, the novel ends up being a collection of short episodes or adventures tacked together by mild adolescent commentary and humor.

In terms of the writing, Stevens captures the voice of her narrator very well. But, that ends up being part of the problem. The voice and personality Stevens gives her narrator makes the prose read as juvenile, and the attempt at giving the narrator a casual and familiar tone with the reader ends up just coming across as unnecessary “fluff.”

The book does have some successful elements, however. Stevens has a strong sense of the absurd, employed in a way that can be effective, and the reality she creates, in terms of Blanca’s abilities and experience as a ghost, is entertaining. The content of this book could have been a successful short story, and the writing could have made for an impressive young adult novel, but together, the plot and writing make this adult novel feel young and distracted.

—Staff writer Kelsey S. Mann can be reached at kelsey.mann@thecrimson.com.