‘House of the Dragon’ Premiere Review: A Fantastical, Female-Driven Tale 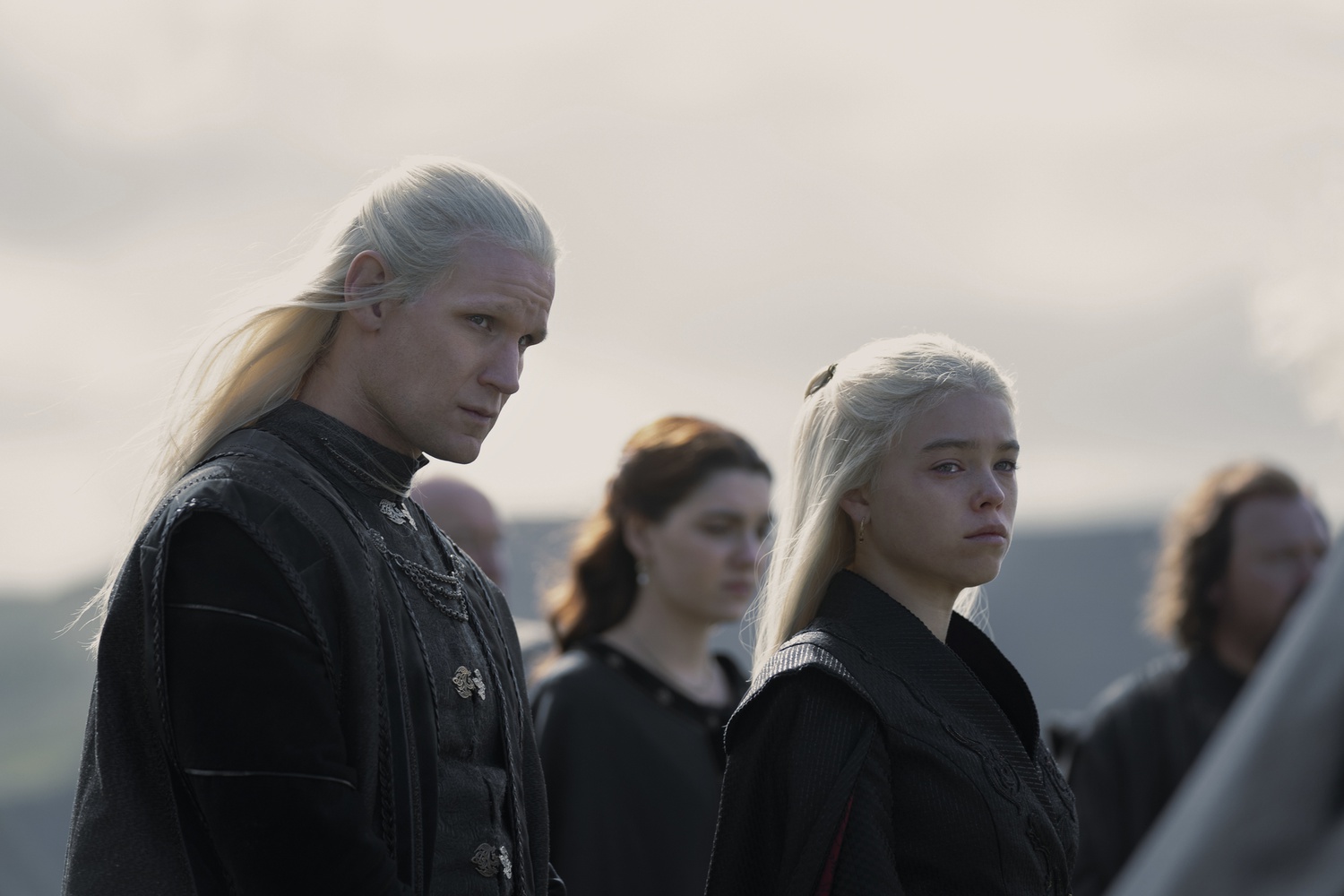 Matt Smith and Milly Alcock in "House of the Dragon." By Courtesy of Ollie Upton / HBO
By Arielle C. Frommer, Crimson Staff Writer

This review contains mild spoilers for Episode One of “House of the Dragon.”

Imagine a land where dragons soar over a palatial red keep, where a young girl, queen by birthright and conquest, has mastered these beasts of the sky, and where family ties can bind and break a dynasty. This might sound straight out of “Game of Thrones,” HBO’s highly acclaimed epic fantasy TV show, and you would not be far off from thinking so. HBO has blessed all “Game of Thrones” fans with a brand-new spin-off following the Targaryen royals, set about 170 years before the start of the show.

“House of the Dragon” was highly anticipated due in part to the unsatisfying ending of “A Game of Thrones” and fans’ thirst to see more of Westeros and House Targaryen. The protagonist of “Game of Thrones” is Daenerys Targaryen, an exiled princess seeking justice and vengeance against the usurpers of her crown. In “House of the Dragon,” however, the Targaryens are at the height of their power: Dragons and silver-haired royals abound in King’s Landing, a thrilling contrast to Daenerys being the last of her kind in the original series.

While “Game of Thrones” was all about the power struggles between the noble houses of Westeros, “House of the Dragon” focuses on the political and personal clashes between various members of the House Targaryen. These conflicts will eventually leave their house permanently weakened as dragons and Targaryens alike perish, which George R. R. Martin — executive producer and author of “A Song of Ice and Fire,” the book series that inspired the show — deems the Dance of the Dragons. The show itself is based on Martin’s fictional historical narrative “Fire & Blood,” an epic chronicle of the Targaryens’ rise to power.

The source material for “House of the Dragon” differs from the “Game of Thrones” source material in two key ways. First, its arc is completed, which will hopefully save “House of the Dragon” from the same decrease in quality the original show suffered when writers were forced to go off-book. Secondly, the book is written as a historical narrative rather than an actual novel, giving the writers creative freedom to flesh out the dialogue and characters while having a definitive plot direction to ground the show and provide a path forward. To fans of the franchise and books, “House of the Dragon” may feel somewhat like a historical drama or political period piece, with all the magical elements and thrilling action scenes of epic fantasy.

The story begins with Prince Viserys, a younger grandson of the Old King Jaehaerys, chosen as his heir over Princess Rhaenys, who by birth order should succeed the Old King. The show is set around ten years after this event, following King Viserys’s only child Rhaenyra as the king defies precedent by crowning her as his heir over his younger brother Daemon.

Princess Rhaenyra’s character, already a dynamic personality in the books, is brought to life in the first episode as a headstrong, fearless child who rides dragons and firmly believes in her right to the throne despite her sex. A major theme of the show is women in power, with the young Rhaenyra as an obvious foil to the Queen Who Never Was, Princess Rhaenys. While this idea was always present in books, the transformation from historical narrative to HBO drama allows for deeper, more nuanced storytelling. Examples include the subtle rivalries between the two princesses, Viserys’s power over his wife Queen Aemma, and the heartbreaking scene where Viserys must decide whether having a male heir is worth losing the woman he loves. Viewers can feel the precariousness of Rhaenyra’s victory at end of the episode as she is crowned heir — not only does her empowerment hinge on her father’s whims, but her ambitious uncle and scheming courtiers loom with their own secret agendas.

Other details really bring the story to life, such as when Rhaenyra is made to light her mother’s pyre in a heartbreaking scene about duty and grief. One particularly compelling concept is the friendship between the young princess and Alicent Hightower, daughter of the Hand to the King. Seasoned fans of the books know that their friendship will eventually turn to bitter rivalry, and it was pleasantly surprising to see them as friends in the first episode (with some mild sapphic undertones), knowing the drama that lies ahead.

Without spoiling any of the historical narrative in “Fire & Blood,” show writers should avoid letting Princess Rhaenyra meet a similar fate to Daenerys. Many fans were deeply upset with the ending of “Game of Thrones” because they watched a beloved character and major female power player be written off as insane and killed off by show writers. For this show to follow the same pattern would not be a great look, and the writers are hopefully aware of this.

It is inevitable that “House of the Dragon” will always be compared to its incredibly popular predecessor, “Game of Thrones,” but its pilot episode suggests that the new series will be just as superb, with its dynamic characters, delicious drama, fantastical worldbuilding, and stunning sets. The casting is also perfect; each character looks straight out of the book, with a standout performance from Matt Smith as Daemon Targaryen. Fans will be excited to return to the world of dragons and future queens every week after this show-stopping premiere.

—Staff writer Arielle C. Frommer can be reached at arielle.frommer@thecrimson.com.