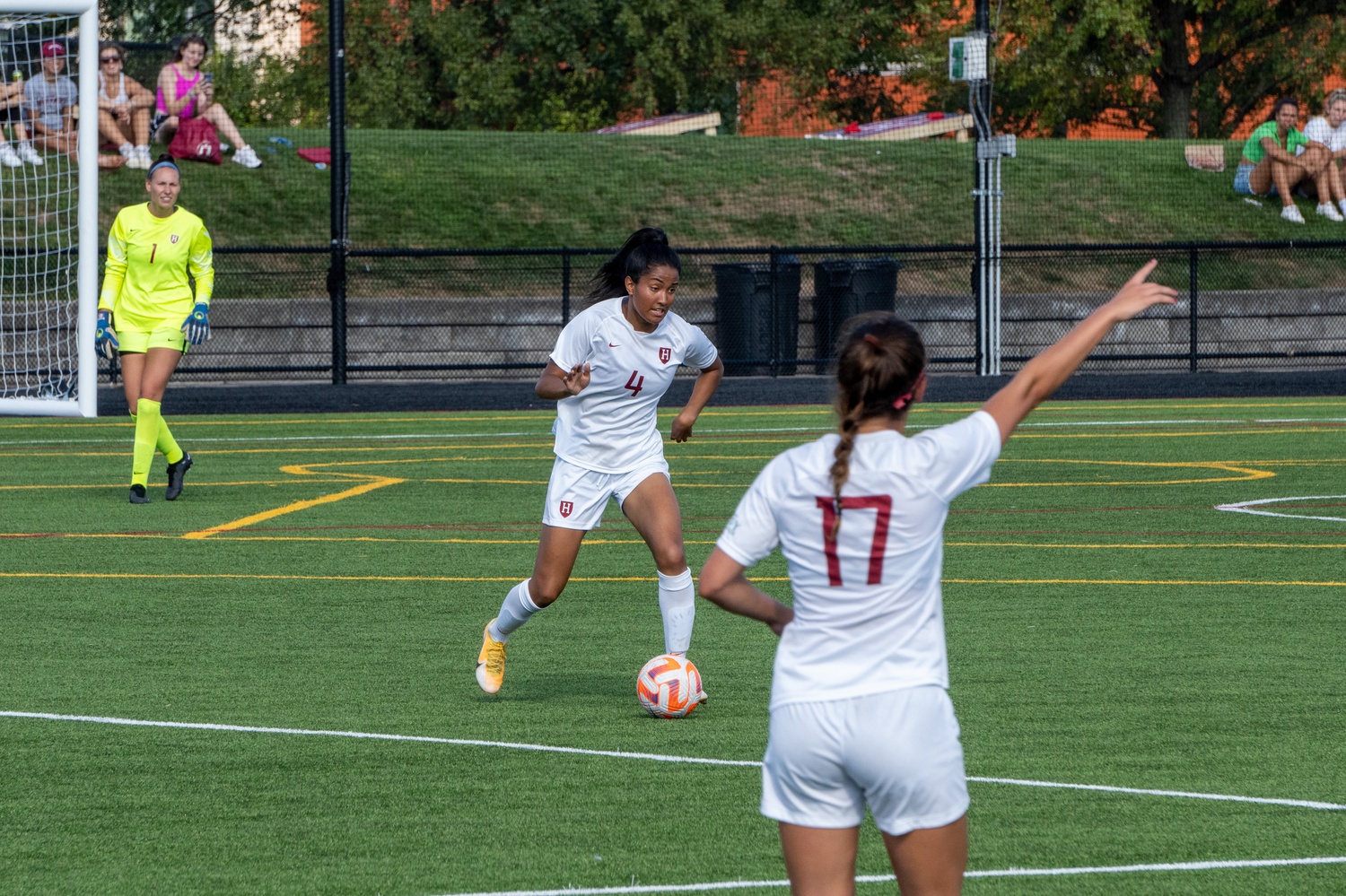 Junior defender Smith Hunter controls the ball with junior Taylor Fasnacht in the foreground and junior goalkeeper Anna Karpenko observing from goal in their match against Northeastern on August 29. Harvard prevailed with a score of 3-2. By Zadoc I. N. Gee
By Zing Gee, Crimson Staff Writer

There was no shortage of heat in North Carolina last weekend as temperatures reached the high eighties and the Crimson came in hot against the University of North Carolina Greensboro and North Carolina State. While the weather cooled off by the time they returned home to face Long Beach State on Thursday, Harvard did not, and has not since. The Crimson are now off to a 5-0 start for the first time since 1996.

“Going down to North Carolina, we knew we’d be tested,” said head coach Chris Hamblin, with the most obvious challenge being No. 17 NC State.

The Crimson dominated UNC Greensboro en route to a 4-0 win on Friday, September 2, before a stellar 2-0 performance to put away highly-anticipated NC State on their home turf. Following last weekend, Harvard reached No. 20/22 in the United Soccer Coaches and Top Drawer Soccer ranking polls, respectively, before their 2-0 win over Long Beach State.

“It was a good team win,” Hamblin said, referencing the NC State game. “For us to be able to start strong was really important to us, because belief is such a huge part of this process, and the team believed that they could play with anyone in the country, and we were able to show up and get the job done. I think we were the better team on the day and deserved the result.” 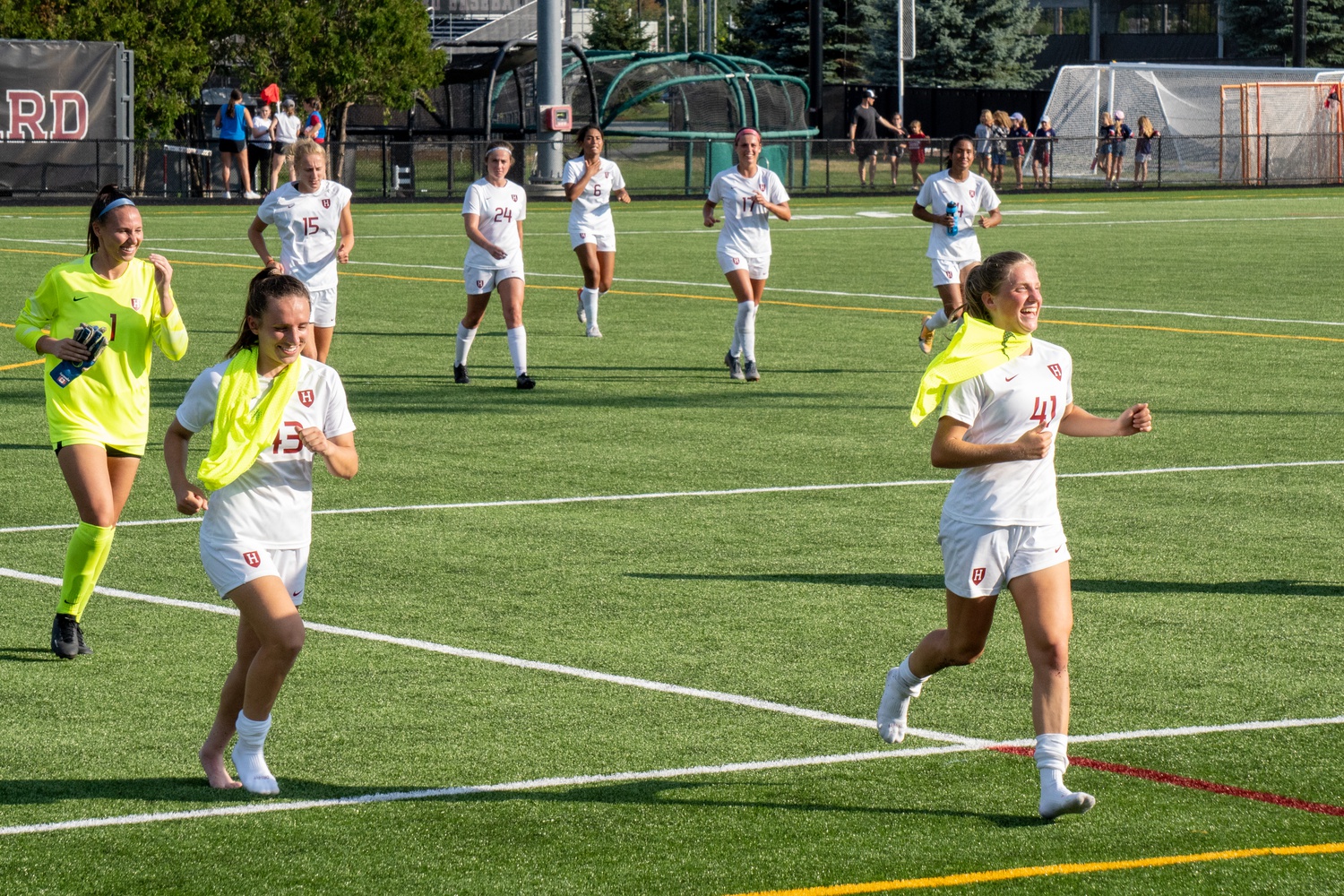 From left to right, junior Anna Karpenko, sophomore Ainsley Ahmadian, and sophomore Hannah Bebar lead the team as they run across Jordan Field to greet fans after Harvard's win over Northeastern on August 29. By Zadoc I. N. Gee

The Crimson (5-0-0, 0-0 Ivy League) entered Thursday’s contest prepared for a formidable matchup from Long Beach State (1-3-3, 0-0 Big West), with Hamblin pointing to LBSU's recent one-goal loss to No. 15/18 University of South California and their sensational, viral bicycle kick goal by senior forward Lena Silano in the 88th minute against the University of San Diego.

However, the Crimson quickly welcomed their opponent to Cambridge and silenced any bit of hype surrounding Long Beach State as sophomore midfielder Hannah Bebar struck early in the seventh minute on a cross from sophomore forward Ainsley Ahmadian to go up 1-0. Harvard went up and never looked back, with Bebar striking again in the 81st minute, this time assisted by senior forward Angela Caloia and senior midfielder Hannah Griffin, for some insurance on the 2-0 victory. Harvard dominated on both sides of the ball, with the defense holding LBSU to just four shots all game. Senior Crimson goalkeeper Hannah Gardner had two saves for the shutout.

In what was both expected to be and proved to be the most exciting and biggest game of the season to date, Harvard came out strong right out of the gate against the Wolfpack (4-1-1, 0-0 Atlantic Coast).

“I think overall, as a team [we] came out flying,” said Ahmadian.

In the 31st minute Ahmadian's shot found the back of the net off the cross from Bebar and the Crimson went up 1-0. Meanwhile, Harvard's defense put on a clinic, holding NC State to just six shots all game. Junior defender Taylor Fasnacht, junior defender Smith Hunter, senior defender Lara Schenk, and senior captain Jordan Di Verniero all logged more than eighty minutes, with Schenk and Hunter staying in all game, locking up NC State’s offense and squashing any hope of a comeback. Junior goalkeeper Anna Karpenko earned her first career shutout with two saves, and the Crimson limited the Wolfpack to zero corner kick opportunities, while they had ten.

“I think our defenders just came out with one of the best mentalities I’ve ever seen from them,” said Ahmadian.

Just five minutes into the second half, Ahmadian gave Harvard some cushion when she split the defense and fired a laser into the top right corner from over twenty-five yards out—which proceeded to sail easily past NC State goalkeeper Maria Echezarreta.

“One of the things we talked about before the game was just making sure that we’re paying attention to all the details, all the little pieces that add up to a good performance,” said Hamblin. “I think the team executed incredibly well on both sides of the ball...I was really proud of how they took the challenge on against a top-25 team and made a statement.”

Two days prior to the NC State matchup, the Crimson lit up the stat sheet against the Spartans (2-2-1, 0-0 Southern Conference) once they arrived in North Carolina. Goals from Ahmadian, first-year forward Audrey Francois, sophomore midfielder Nicola Golen, and junior midfiedler Megan Mackey highlighted the dominant win over UNC Greensboro. The defense held strong behind Schenk’s team-high 78 minutes and Gardner’s four saves for the shutout. Ahmadian and Francois received the Ivy League Player of the Week and Rookie of the Week awards, respectively, after their performances during the road trip.

Reflecting on the North Carolina trip, Ahmadian and Hamblin both acknowledged the team’s strong start but remained focused on the team’s future and continued improvement.

“I think for us, it’s about consistency. It’s focusing on who we are, what we’re trying to do, and improving our game rather than worrying about the opposition,” explained Hamblin. “I’m just really excited about the group and where we’re at, and we’ve had a strong start, but I think we’ve still got another gear we can find, and so we’re excited to try and work towards that.”