‘No Other Choice’: Harvard Affiliates March With Thousands Across the Country for Gun Control 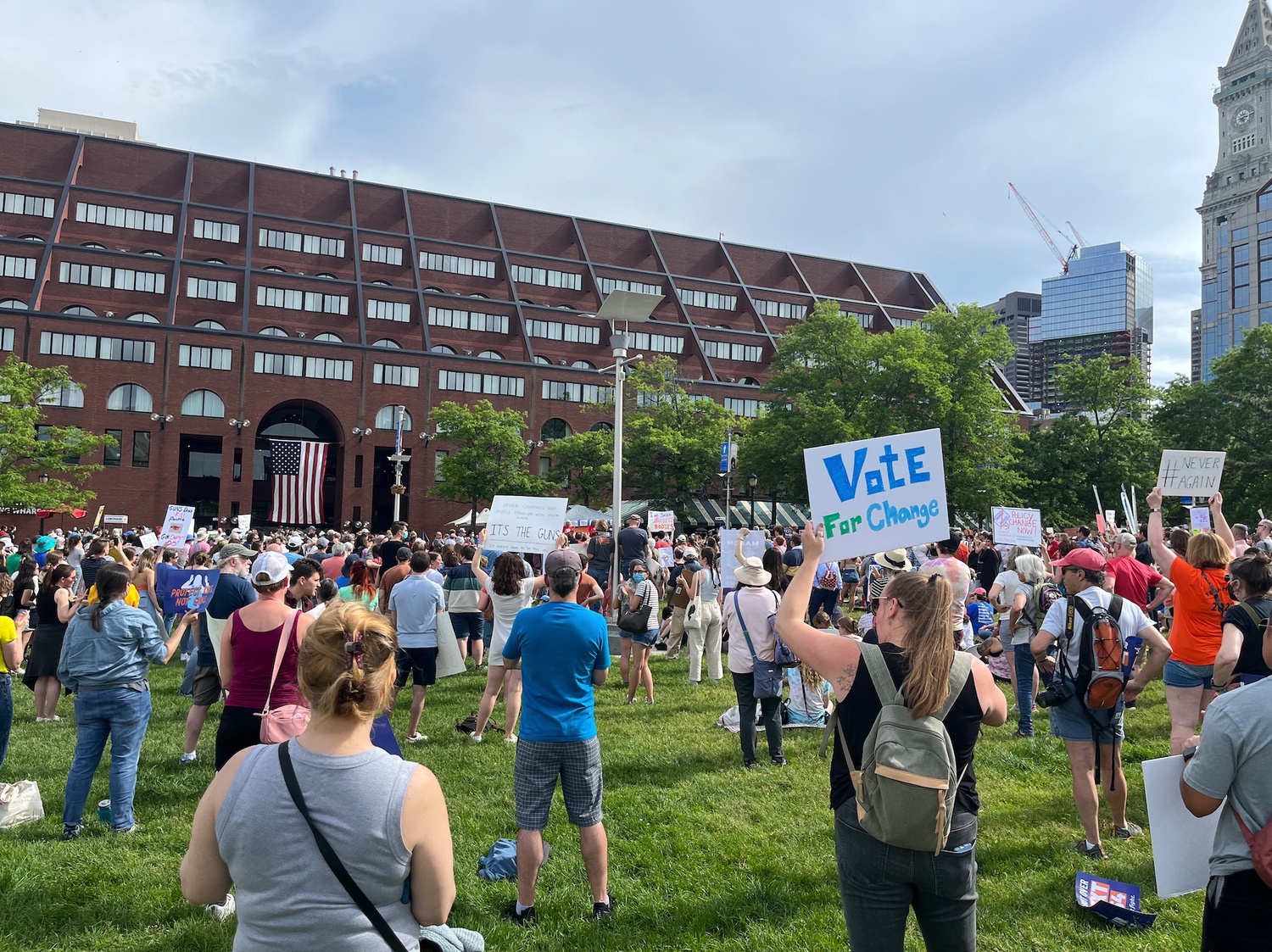 Speakers at the Boston March for Our Lives rally urged attendees on Saturday afternoon to vote in November for representatives who support gun reform. By Isabella B. Cho
By Isabella B. Cho and Meimei Xu, Crimson Staff Writers

Facing thousands of people in the National Mall in Washington, Harvard College rising junior RuQuan S. Brown ’24 took the stage at a March for Our Lives protest Saturday.

Condemning “broken, ignorant, and irresponsible” politicians who oppose gun control legislation, Brown said he had “no other choice” but to take his safety and the safety of others into his own hands, but found it nearly impossible to do when gun violence pervades everyday life.

On Saturday, thousands of attendees convened in roughly 450 marches across the country — including in major cities like Washington, New York City, Los Angeles, Chicago, and Boston — to urge lawmakers to take harsher federal and state action against gun violence. The protests were organized by March for Our Lives, a student-led movement that advocates for gun control legislation in the United States.

The rallies occurred in the wake of the deadly shootings in Uvalde, Texas, and Buffalo, New York, which killed 21 and 10 individuals, respectively.

Less than an hour after Brown’s call to action in the District, the crowd suddenly devolved into a panic as someone yelled, “gunshot.” Organizers quickly restored order after they discovered it was a false alarm. The individual was detained by officers and carried no weapons, according to a tweet by the U.S. Park Police following the incident.

“The issue we’re talking about is very deep and serious and can impact any American at anytime,” she said. “It seemed as though there might have been a situation where someone had a gun. The situation was resolved, but definitely set the tone.” 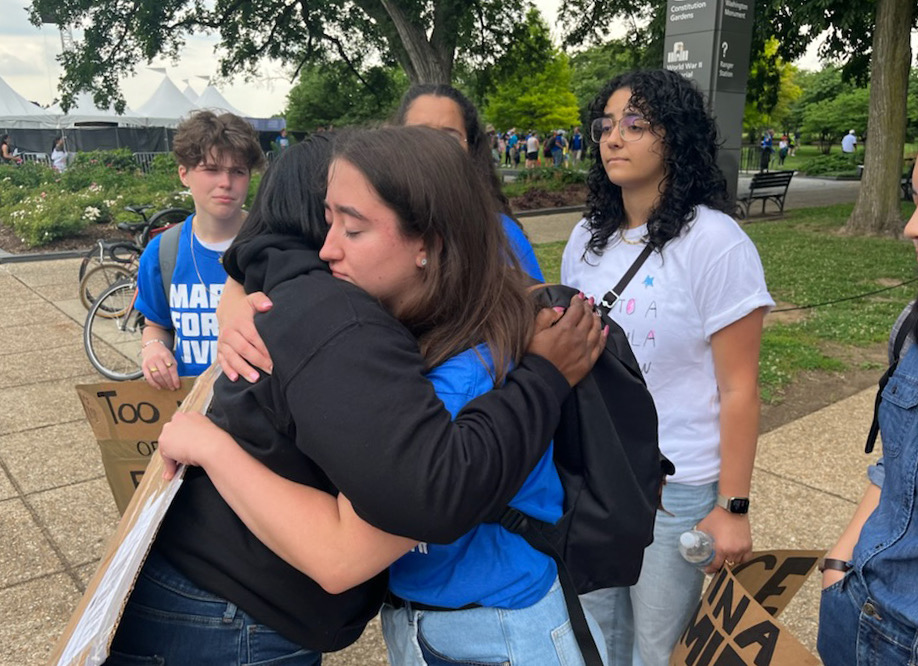 Closer to Harvard, more than a thousand people convened near the waterfront at Christopher Columbus Park in Boston Saturday afternoon to call for state and federal gun control legislation. Many attendees donned blue or white March for Our Lives shirts and carried colorful handmade signs — some of which read, “The NRA Has Bought Congress,” “In America the Only Thing Easier to Buy Than a Gun Is a Republican,” and “I Should Be Writing My College Essay Not My Will.”

“Let’s be clear: If you do not support life-saving measures like universal background checks, we will vote you out in November,” said Boston rally co-organizer Justin Meszler to the hundreds of attendees. “Yet we know simply voting is not enough. Every day, more mass shootings occur — over 200 mass shootings so far in 2022.”

“Every day that our elected officials offer thoughts and prayers instead of meaningful, tangible action is blood on their hands. We need federal action now,” he added.

The National Rifle Association did not respond to a request for comment Saturday afternoon.

Earlier this week, the U.S. House of Representatives passed gun control legislation that would raise the minimum age for buying semi-automatic rifles and prohibit the sale of magazines with a capacity of more than 15 rounds. The bills, however, for which at least 10 Republican senators would need to vote in support, are unlikely to pass the U.S. Senate and become law.

A day after the March for Our Lives demonstrations on Saturday, a bipartisan group of senators announced that it struck a separate tentative agreement that puts forth modest gun reform and funds for mental health and school security measures.

Two of the deal’s chief negotiators, Senator Chris S. Murphy (D-Conn.) and Senator John Cornyn (R-Texas), called the deal a “commonsense, bipartisan proposal” in a joint statement. The deal would provide states with resources for “red flag” laws — which enable guardians or authorities to petition courts to withhold firearms from individuals deemed a risk to themselves or those around them — as well as more robust background checks involving criminal record and mental health review for gun buyers aged 18 to 21.

Some organizers and attendees also noted the importance of passing state gun control legislation Saturday. Madeline J. Ranalli ’24, who co-founded the Boston chapter of March for Our Lives in 2018 and is a board member of the Massachusetts Coalition to Prevent Gun Violence, said she hopes attendees channel the passion they brought to the rally to push for legislative action in Massachusetts.

“I really hope a lot of the energy that people have brought around gun violence around the country gets really focused here at home,” she said. “We have a lot of priority bills in the State House that would make a lot of difference in terms of banning firearm manufacturing to other states, which is a huge problem here in Massachusetts.” 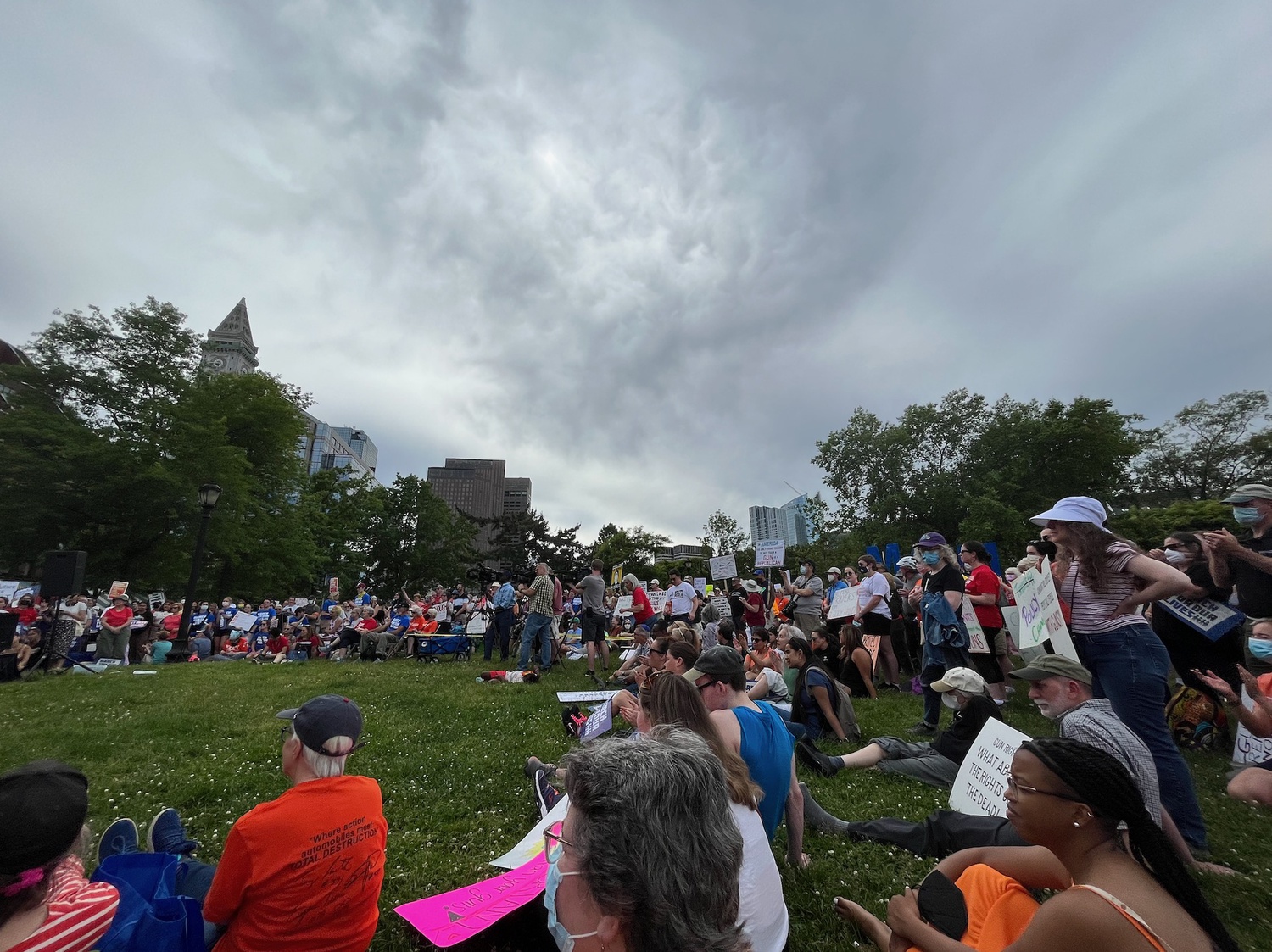 Attendees, many holding handmade signs, convened near the waterfront in downtown Boston on Saturday afternoon to hear speakers and urge legislative action on gun control. By Isabella B. Cho
Advertisement

Though Massachusetts currently bans the possession of semiautomatic rifles, companies can still produce the weapons within the state for distribution elsewhere.

Harvard students also attended and helped organize the New York rally, which began in Cadman Plaza in Brooklyn, crossed the Brooklyn Bridge, and concluded at the intersection of Liberty and Broadway Streets in New York City.

“When I was at the front with the banner, one of the other organizers came over to me, and we literally looked back behind us and the entire bridge — I could not see the end,” said incoming freshman Jack Kelly ’26, who helped organize the rally. “So it’s pretty powerful to illustrate the people-powered movement that we have created here in New York City and New York state.”

At the Washington rally, March for Our Lives co-founder David M. Hogg ’23 pointed to gun control legislation passed since the organization was founded in 2o18 following the shooting at Marjory Stoneman Douglas High School in Parkland, Florida.

“This time is different!” Hogg said, leading the audience in a chant.

In some ways, according to attendees, the recurrence of mass shootings in schools is nothing new.

Elizabeth C. “Liz” Hoveland ’22, who attended the Boston march, said they remember when the Sandy Hook Elementary School shooting occurred, during which a gunman shot and killed 20 children and six adults in Newtown, Connecticut, in 2012.

Hoveland said they do not feel optimistic that recent federal gun control bills will pass the Senate, adding that they had expected more legislation to be passed after the 2018 shooting in Parkland.

Some organizers and attendees called on others to vote for legislators who support gun control in this year’s midterm elections, when all House seats and 35 Senate seats will be up for election.

Jaclyn L. “Jackie” Corin ’23, a co-founder of March for Our Lives, said change at the federal level will “take some time,” but is possible through voting.