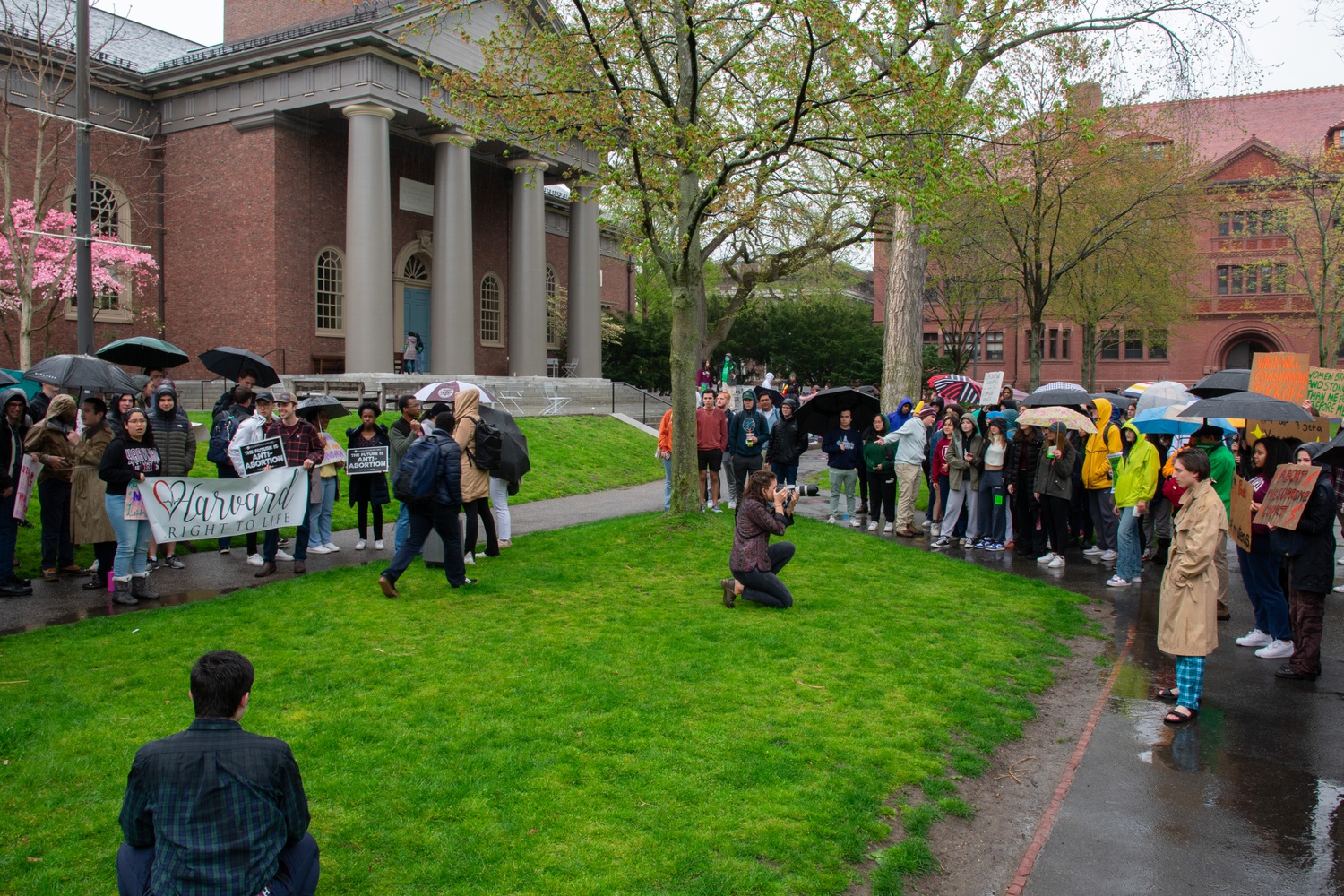 Harvard students staged a series of rallies about abortion this week in response to a report that the Supreme Court is on the brink of striking down the landmark Roe v. Wade decision.

In response to a leaked draft majority opinion that would end guaranteed legal access to abortion, around 100 students demonstrated in support of abortion rights outside Memorial Church Wednesday. At the same time, a smaller group representing Harvard Right to Life, an anti-abortion student organization, gathered nearby in counterprotest. The two groups faced off at points, waving posters and heckling each other.

On Thursday afternoon, more than 50 students congregated on the steps of Widener Library as part of a national walkout in support of abortion rights. Roughly 30 anti-abortion demonstrators gathered across the aisle of the steps. The two sides chanted and waved signs, garnering a crowd of onlookers and Securitas patrol.

The protests come after Politico published a leaked draft majority opinion showing that the court voted to strike down Roe v. Wade, a landmark 1973 decision protecting the right to abortion access nationwide. The draft, penned by Associate Justice Samuel A. Alito Jr., sent shockwaves across the country. Chief Justice John G. Roberts Jr. ’76 confirmed the draft’s authenticity, though he said the decision is not yet finalized.

At Wednesday’s rally, abortion rights protesters held signs that bore the phrases “Pro Life = Pro Death” and “Reproductive Rights are Human Rights.” Some students delivered speeches sharing their frustration and anger at the possibility of Roe v. Wade being overturned. 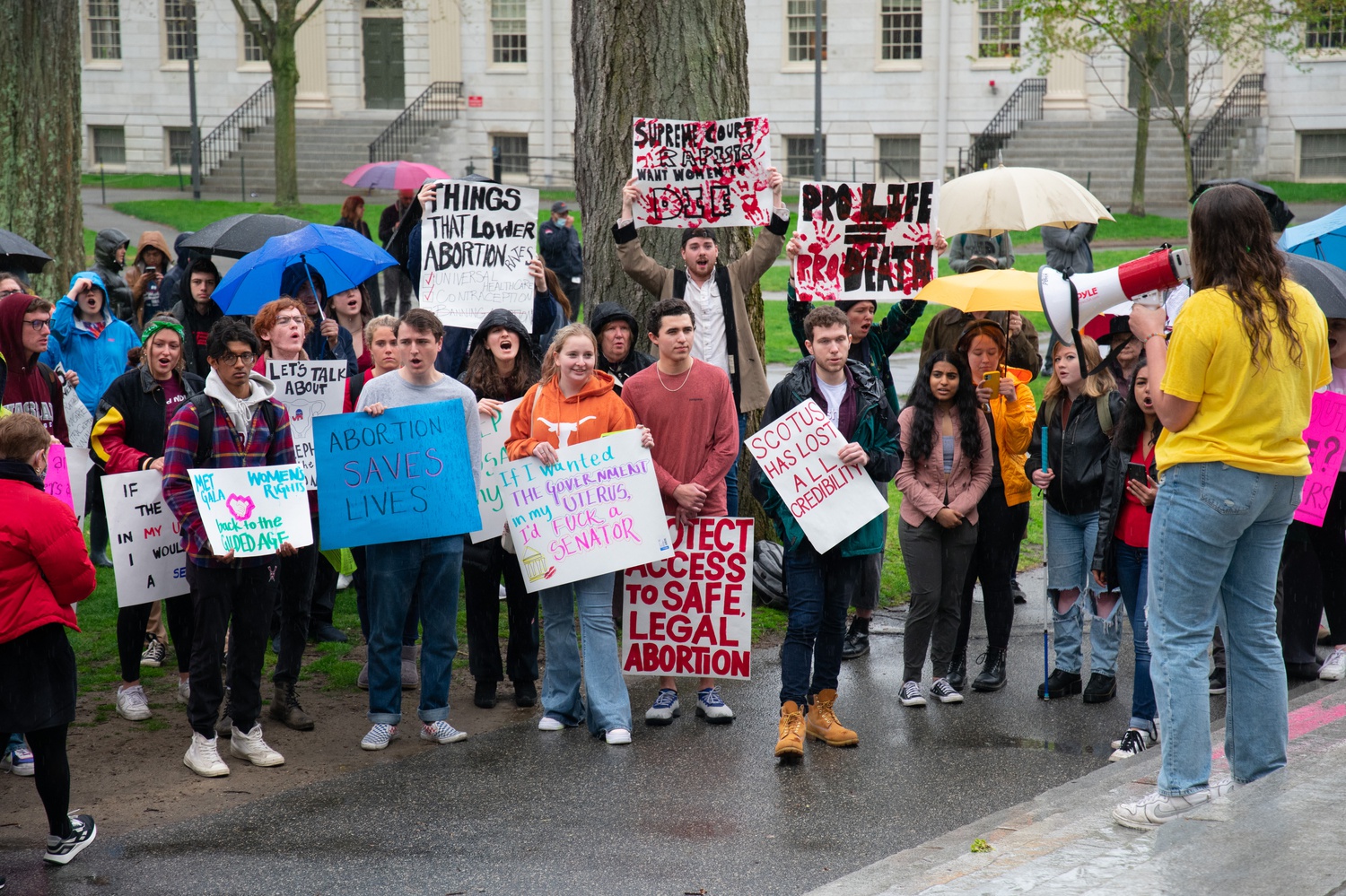 Elizabeth M. Benecchi leads a rally in support of abortion rights on the steps of Memorial Church Wednesday. By Julian J. Giordano

“For basic humanity, for the future of our nation, we must raise our voices and make sure our government knows that this is not what we want,” Hea Pushpraj ’25 said in a speech on Wednesday. “We must all stand together to ensure federal protection and to make sure more states cannot follow Oklahoma and Texas.”

“The state of those states will not be the state of our nation,” Pushpraj said.

Elizabeth M. Benecchi ’25 said in an interview before Wednesday’s pro-abortion rights protest that the rally’s organizers were “really infuriated” and “really upset” by the leaked draft.

“Women have had access to safe abortion for the past 49 years without extensive government oversight, and we intend to keep it that way,” Benecchi said in a speech during the rally. “We as women have autonomy over our own bodies. We have the right to make our own decisions and we have the right to choose our own futures.”

Wednesday’s pro-abortion rights rally was organized by Ava K. Pallotta ’25, who said in an interview before the protest that she “broke down sobbing” upon learning that Roe v. Wade was likely to be overturned.

“I remember sitting there crying and being like, ‘God, I really hope somebody organizes a rally.’ And then I was like, ‘Why not me?’” Pallotta said. “That was the reason behind it, just hoping that people would want to get out and support, and the community response has been incredible.”

Protesters in the counterrally sang songs, including “America the Beautiful” and Justin Bieber’s “Baby” in an effort to drown out the pro-abortion rights speeches, while holding posters that read “Pro Life, Pro Peace” and “The Future is Anti-Abortion.” 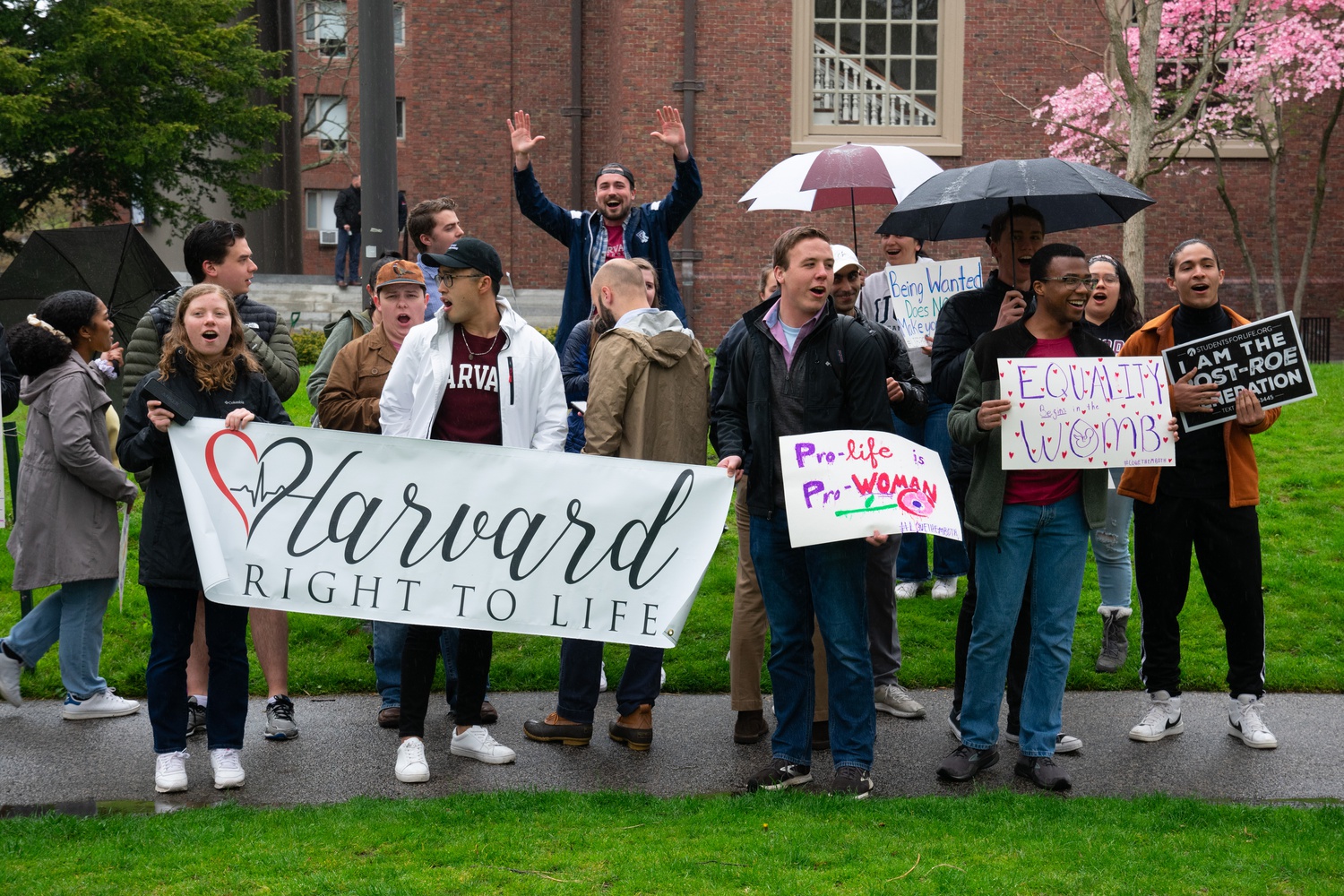 Students with Harvard Right to Life demonstrated in Harvard Yard on Wednesday, directly next to an abortion rights rally. By Julian J. Giordano

Olivia L. Glunz ’25, co-president of Harvard Right to Life, said in an interview during Thursday’s protest that her organization’s goal was to share a “message of joy and hope.”

Ava Swanson ’24, the other co-president of Harvard Right to Life, said in an interview during Thursday’s protest that she was “really proud” that the protest was civil.

“A lot of people have never really encountered other pro-life students or students who are willing to say that they’re pro-life on this campus,” Glunz said. “It’s really important to say that we have a reason for what we believe, that this is a really beautiful message that we want to create a world in which every single human life is valued.”

Organizers from both sides expressed a desire to keep the protests civil and peaceful, even as tensions rose and protesters shouted chants at each other.

“My goal always is to make people feel safe and make sure no one gets hurt. So hopefully, everything remains peaceful,” said Pallotta, the abortion rights rally organizer. “Just as they have the right to organize, so do we.”

Though the Wednesday rally occurred during a downpour of rain, A.J. Yi ’25 said they thought the rally was “phenomenal.”

“This message can ripple out to a lot of people who look at Harvard students as a model of what advocacy should look like,” Yi said.

Katarzyna A. “Kasia” Zarzycka ’22-’23, who attended the abortion rights rally Wednesday, said she wished more students at the College realized the “gravity” of the situation.

“Students in this school have power — they will be the people who will be deciding about our life soon,” Zarzycka said. “It all starts here.”