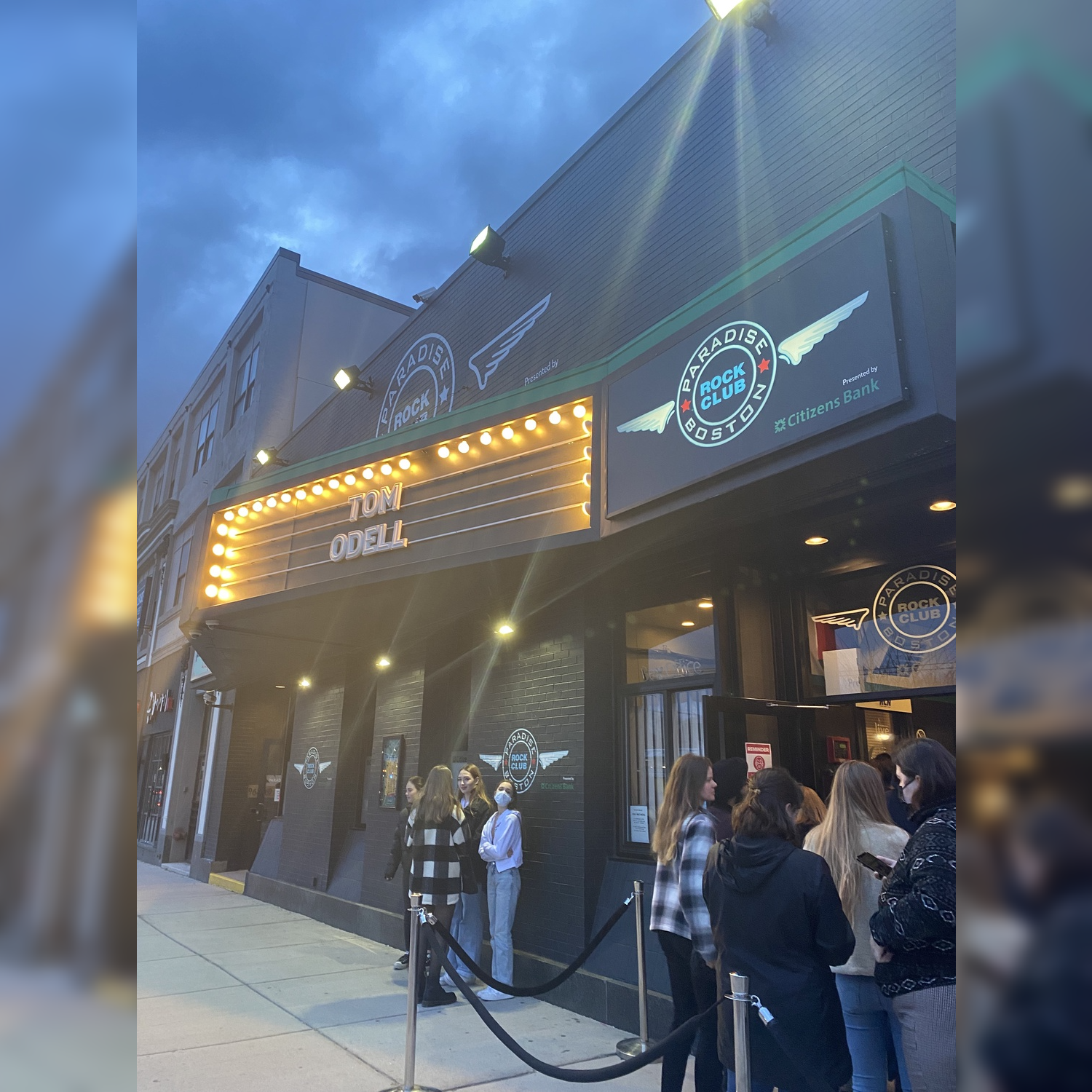 Under threatening storm clouds on the evening of April 16, an anxious crowd of New Englanders lined up outside the Paradise Rock Club to see English singer-songwriter Tom Odell perform the North American leg of his “Monsters” Tour. By Aarya A. Kaushik
By Aarya A. Kaushik, Crimson Staff Writer

Under threatening storm clouds on the evening of April 16, an anxious crowd of New Englanders lined up outside the Paradise Rock Club to see English singer-songwriter Tom Odell perform the North American leg of his “Monsters” Tour. The following few hours would be consumed in a musical storm of passionately articulated healing amidst raw heartbreak.

Even though Odell didn’t take the stage until 9 p.m., the ambience in the club was lively and jovial. Minnesotan singer-songwriter Ber came out as Odell’s opener around 8 p.m., jogging onstage and casually calling out, “What’s up, Coachella?”

This lighthearted air continued throughout Ber’s performance; at one point, while recounting the backstory of a song, she said, “One time I dated a Boston guy,” and someone from the audience promptly shouted back, “Sorry!” Ber’s vibe seemed to work really well with the crowd, who sang along to some of her choruses and engaged with her jokes. Her girl-and-guitar act was a good precursor to Odell’s boy-and-piano performance. The greatest similarity between the two was the topic central to their music: heartbreak. “We all love Tom — heartbroken and all,” Ber said, met with shrieking cheers. “Anyone else planning on crying tonight?”

Indeed, when Odell took the stage, the singer only lasted two songs before tearing up himself. “You can’t take back a song once it’s been written — that’s the beauty of it,” he said. It became clear that Odell is a songwriter who feels all the emotions he felt when writing a song every time he goes to perform it. An exhausting act, surely, but also an incredibly powerful one.

Odell took time to talk about his journey with his mental health, particularly detailing how he struggled with bouts of apathy in between panic attacks. His willingness to be so vulnerable while in a performance environment was striking — the crowd fell silent as though listening to a close friend talk about their pain. The intimacy of the moment ebbed onward as he finished talking and led into “Numb,” the first song he wrote on the album “Monsters.”

Continuing in the vein of serious discussion, Odell shared his experience of hearing about horrific school shootings happening while he was living on the West Coast. For someone from England, where gun violence is not as prevalent an issue as it is in America (due to there not being a constitutional right to bear arms), hearing about massacre after massacre was deeply frightening. His song “Streets of Heaven” was written in homage to, and from the imagined perspective of the young lives lost to school gun violence. “Another shot, wasted life / Another friend to walk beside,” Odell crooned, an amalgam of grief and anger lodged in his throat. “I know it hurts but wipe your eyes / And we’ll sing until the old men cry.”

But the intimacy that Odell crafted with his audience was not limited to his songs about heartbreak. Rather, it held steady even in his more upbeat, uplifting songs. For instance, the fan favorite “Grow Old with Me” was performed not only by Odell but by the whole crowd, who sang every word as if they were the ones who had penned the lyrics. And when Odell played “Best Day of My Life,” released just two weeks ago, he ended with a flourishing “a ha ha!” chord to lighten the mood.

Maintaining a connection with his crowd seemed of particular importance to Odell. Though he was stationed at his piano for almost the entire act, he did at one point walk around to the other side of the stage, acknowledging the people to whom his back was turned. He jokingly talked about how Billy Joel, legendary “Pianoman” and one of Odell’s self-professed idols, had a piano that turned and went round and round the stage, but “we decided to spend the budget on something else.”

This connection kept the energy high even when Odell dipped back into more melancholy songs, like his cover of Lana Del Rey’s “Video Games.” He talked about how Del Rey was present the first time he ever performed live on TV in the UK, and she spoke reassuring words to him before he took the stage. His rendition of “Video Games” cast a special magic over the crowd; hearing Del Rey’s mesmerizing lyrics voiced in Odell’s signature croon was a once-in-a-lifetime experience.

Collaborator Max Clilverd came out to play guitar with Odell on a few songs, including “Heal,” whose arrangement they changed so that it became a slow, enthralling crescendo that ultimately crashed over the crowd in a wave of emotive sound. “Take my mind and take my pain / Like an empty bottle takes the rain / And heal.”

—Staff writer Aarya A. Kaushik can be reached at aarya.kaushik@thecrimson.com.