“We did things that I don’t think anyone thought we would be able to do when we first started this journey in the fall, except for our group."
By Noah Jun

First-year attacker Erin Kim looks to strike against Pomona-Pitzer on February 6. The Crimson went on to win 17-4. By Courtesy of Gil Talbot/Harvard Athletics

Toward the end of its season, the Harvard women’s water polo team defeated Princeton for the first time in 6,551 days, a feat it had not achieved since the 2004 season. This victory was one of many accolades in a historic year for the Crimson. Harvard boasted many weekly awards given to its players by the Collegiate Water Polo Association throughout its three-month season, which culminated in a championship appearance — the furthest the team had ever gone in the tournament.

The Crimson (23-7, 9-3 CWPA) had a strong entrance in the CWPA Championships with a 16-0 shutout against Mount St. Mary (8-26, 1-11) for the second time that season and the third in program history. In the semifinals, the team achieved its third takedown of No. 20 Princeton (21-10, 8-4) in April, 11-9. Although his team fell to No. 7 Michigan for the conference title in what would have serendipitously marked his 200th win at the helm, head coach Ted Minnis felt nothing but excitement about the season as a whole.

“I was the happiest you could be without winning a championship but with the way we played,” Minnis said. “We did things that I don’t think anyone thought we would be able to do when we first started this journey in the fall, except for our group. We all believed that this was what we were capable of doing.”

“We had a lot of talent,” Minnis reflected. “This was by far the strongest defensive team I’ve had. We were able to do things defensively that allowed us to have a lot of success. I also think this team was very hungry and bought into the whole process of what it took to play at a high level, and they were a very supportive team. That was very critical to us having our success; it all lined up with how hard they worked, how much they supported one another, and how talented and deep they were.”

“Whether it was the defensive and offensive plays, we were running or our ‘shark mindset’, which we try to maintain,” Banks explained. “All of my teammates were fully bought into doing what we needed to do to accomplish our goals, and it was so incredible to see the impact it had on our season.”

Banks, who co-captained the team with Thawley, tallied 216 saves and added four consecutive CWPA Defensive Player of the Week awards to her two other recognitions in the season. The CWPA named her to its All-Conference First Team as well as the All-Tournament First Team for her contribution to the Crimson’s championship run. Tingler, who scored 29 goals and had a team-high 30 assists, joined Banks on the first team for the tournament, while Halligan also made the all-conference team for notching 33 points and 45 steals. Complementing Halligan’s seniority was first-year attacker Erin Kim, who scored 40 points throughout her debut season for Harvard.

The season started in Philadelphia at the end of January with a tournament at which the Crimson earned two convincing victories over host Villanova (20-15, 9-7 MAAC). The team only dropped one of its first thirteen games, and its dominance began to show at an undefeated four-game weekend at the Princeton Invitational and two weeks later with a stellar 3-0 to start conference play. Despite losing its 2021 season, Harvard displayed no signs of rust, maintaining a high quality of play.

“It was scary coming back to two halves of a team that didn’t know each other in the slightest,” Thawley admitted. “We all knew that the fitness and sharpness of water polo would come back to us in time, but we couldn’t predict whether healthy bonds would form between the newcomers and returners. As a captain, I felt a lot of pressure to make life as easy as possible on everyone on the team, to make the translation as seamless as it could be, and to make sure everyone felt seen, heard, and loved… But I couldn’t have predicted that not only would we learn very quickly to work together, but we would be the closest, healthiest, most cohesive, and successful women's team to go through the program.” 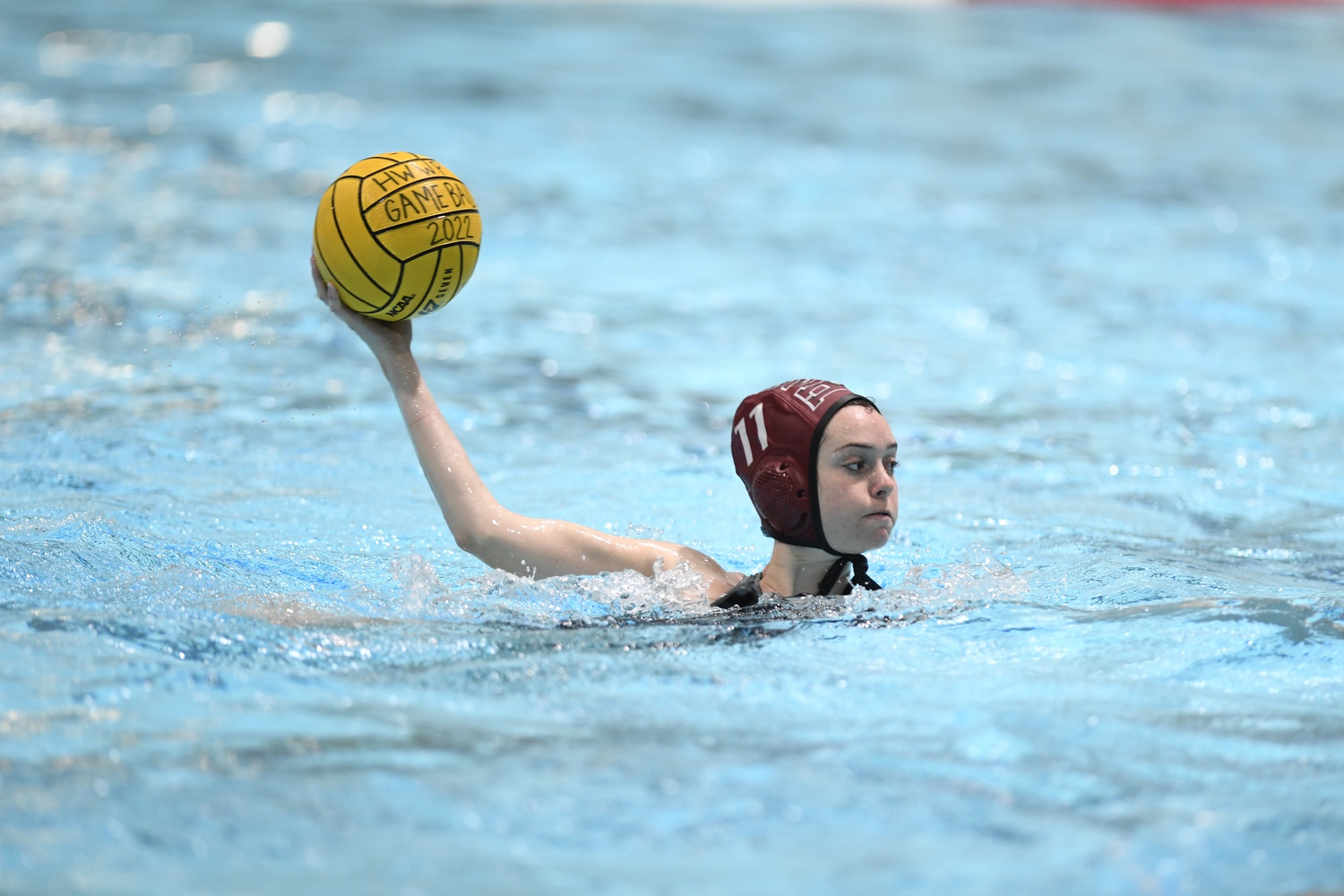 Junior attacker Evan Tingler looks for openings in the match against Pomona-Pitzer. By Courtesy of Gil Talbot/Harvard Athletics

Minnis also deftly adjusted his coaching style to effectively guide two cohorts of players who had never entered the pool for the Crimson.

“You have to adapt to different personalities,” he explained. “We did a very good job, myself and my staff, in the summer of doing a lot of talking about what we wanted our culture to look like, what leadership qualities we were looking for, and what was important to us individually and as a group.”

The first major disappointment the team faced came when its spring break trip to California to play No. 20 San Diego State University, No. 1 Stanford, and No. 13 UC San Diego was canceled. Nevertheless, the coaching staff and players used this hiccup to their advantage.

“Not only did we lose opportunities to play in California, which for a lot of our team is home, but we also lost opportunities to test our strengths against some of the top teams in the country,” Banks said. “It was the peak of adversity during this season. However, our team persisted and eventually overcame the challenge.”

Minnis noted the silver lining of the trip’s cancellation, saying that the team took the opportunity to reset and invest in the second half of the season by refining individual skills. These improvements instantly came to fruition in a tight 12-10 loss to Michigan, followed by a 10-8 victory to snap a 29-game losing streak to Princeton. Harvard would pick up its second win against the Tigers in a dramatic overtime finish the following weekend. In the sudden death period, Halligan scored with less than 20 seconds left off a perfectly-placed lob into the corner of the net. Sophomore attacker Brooke Hourigan, who led the team with 56 goals, contributed four points to the consolidating victory.

The Crimson then won three of its next four games, losing to Michigan for the second time that season, before its historic run in the conference championships.

Despite a disappointing end in its final match of the year, the women’s water polo team has much to look forward to in 2023. Rising seniors Banks, Thawley, and Tingler, as well as center defender Jaiden Miller and attacker Borden Wahl – who had 30 and 32 goals on the season, respectively – provide critical experience to a team featuring talented underclassmen as well as the four incoming members of the class of 2026. Nevertheless, the team is saying farewell to two of this season’s key players, Halligan and senior attacker Quinne Pursell.

“We graduate two big pieces to our program and culture,” Minnis conceded. “Hopefully we can do some things that are going to help us continue the success and path that they started us down.”

“There are big shoes to fill, but I think that’s a good thing,” Thawley said. “The standard is set very high, and everyone knows that. We all are highly attune to the feelings and pride this team brought, and I don’t think anyone will expect anything less of themselves next year. The best is yet to come.”

Harvard will look to build off its first-ever championship appearance and numerous accolades in training next fall and in competition starting in the new year.