“I think that the team collectively has really been pulling in a good direction, and I feel very, very good about where we're at,” said head coach Chris Hamblin.
By Zing Gee 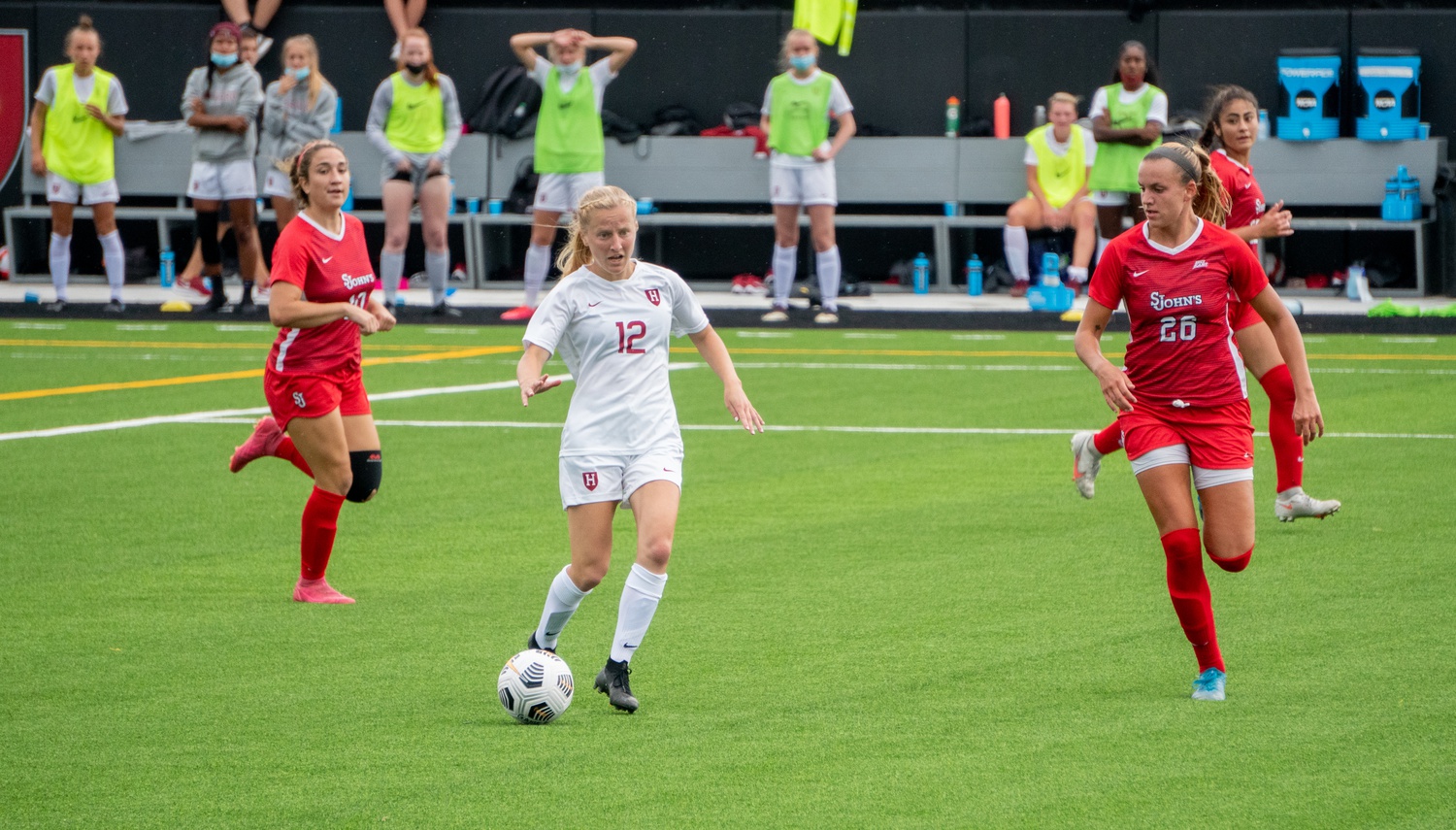 Senior forward Murphey Agnew takes the ball down the pitch during a game against St. John's University on September 5. Agnew is one of seven seniors graduating from the program. By Zing Gee

There’s much to be excited about as the summer countdown for Harvard women’s soccer’s return to the pitch begins. The team just finished a successful spring training and is now heading into a promising summer of preparation before it returns to campus in August. When the Crimson does, it’ll be joined by a talented incoming first-year class as it chases an Ivy League title and more.

Harvard (12-3-1, 5-2 Ivy League) continues to build on a stellar fall 2021 campaign which saw the Crimson earn its first at-large bid to the NCAA Division I Tournament since 2004 before falling to a strong Wake Forest team in the first round. The team graduates seven seniors: goalkeeper Samantha Schmitz, midfielders Maria Dimartinis and Taylor Nielsen; forwards Lauren Raimondo, Trinity Thomas, and Murphy Agnew; and defender Jillian Wachira.

This past spring saw the returning squad play four scrimmages, including a blowout victory over the North Toronto Nitros, a 3-0 win over the University of Connecticut, a 2-0 win over Providence College — who also won an at-large NCAA tournament bid last season – and a 5-2 win over Boston University.

Rising second semester sophomore midfielder Hannah Bebar acknowledged that although the wins were significant, other elements of spring training have been similarly vital in shaping the upcoming season.

“We're definitely going to come into the fall with an idea of different ways to improve and different looks, and so I think winning those games is important, but it was really more of the smaller detailed work that we did that was critical,” said Bebar, a Crimson sports editor.

“I think that the team collectively has really been pulling in a good direction, and I feel very, very good about where we're at,” said head coach Chris Hamblin.

Hamblin will be entering his thirteenth season with Harvard this fall, and his eighth as head coach.

In addition to Hamblin and the rest of the coaching staff’s leadership, two new captains will be taking the helm. Rising senior defender Jordan Di Verniero and rising senior midfielder/forward Ava Lung were elected by their teammates this spring to serve as team captains for the upcoming campaign.

“They are two great women who have already gotten off to a great start with their leadership…I'm excited that they'll be leading the team this fall…they’re very selfless individuals, and so they’re going to make sure the team comes first in all that they do,” Hamblin said.

“I’m really looking forward to seeing how that [spring] work plays into our fall season,” Lung said. “One of our main focuses, as always, is just to develop and maintain a really great team culture.”

Hamblin emphasized that after a successful 2021 campaign, the Crimson has large aspirations heading into the fall — ones that require teamwork and commitment to the process.

“I think one of [the] statements we want to focus on is to become the best team in Ivy League history,” Hamblin said. “Ivy League history is the context, but becoming the best team is the process we’ve got to focus on, and the three words in that statement are: becoming, which is focusing on the process…best, [which] is how do we define success and the standards; and the team is that we do it together.”

Bebar, who garnered First Team All-Ivy, third team All-American, and Ivy League Rookie of the Year honors last season, reiterated the team’s goals for the fall and hunger to win.

“We’re definitely going to come back aiming for the Ivy League title. I think we played well enough last year to contend for it, and we're definitely very disappointed to finish third,” Bebar said. “I'm really looking forward to see how that work plays into our fall season.” 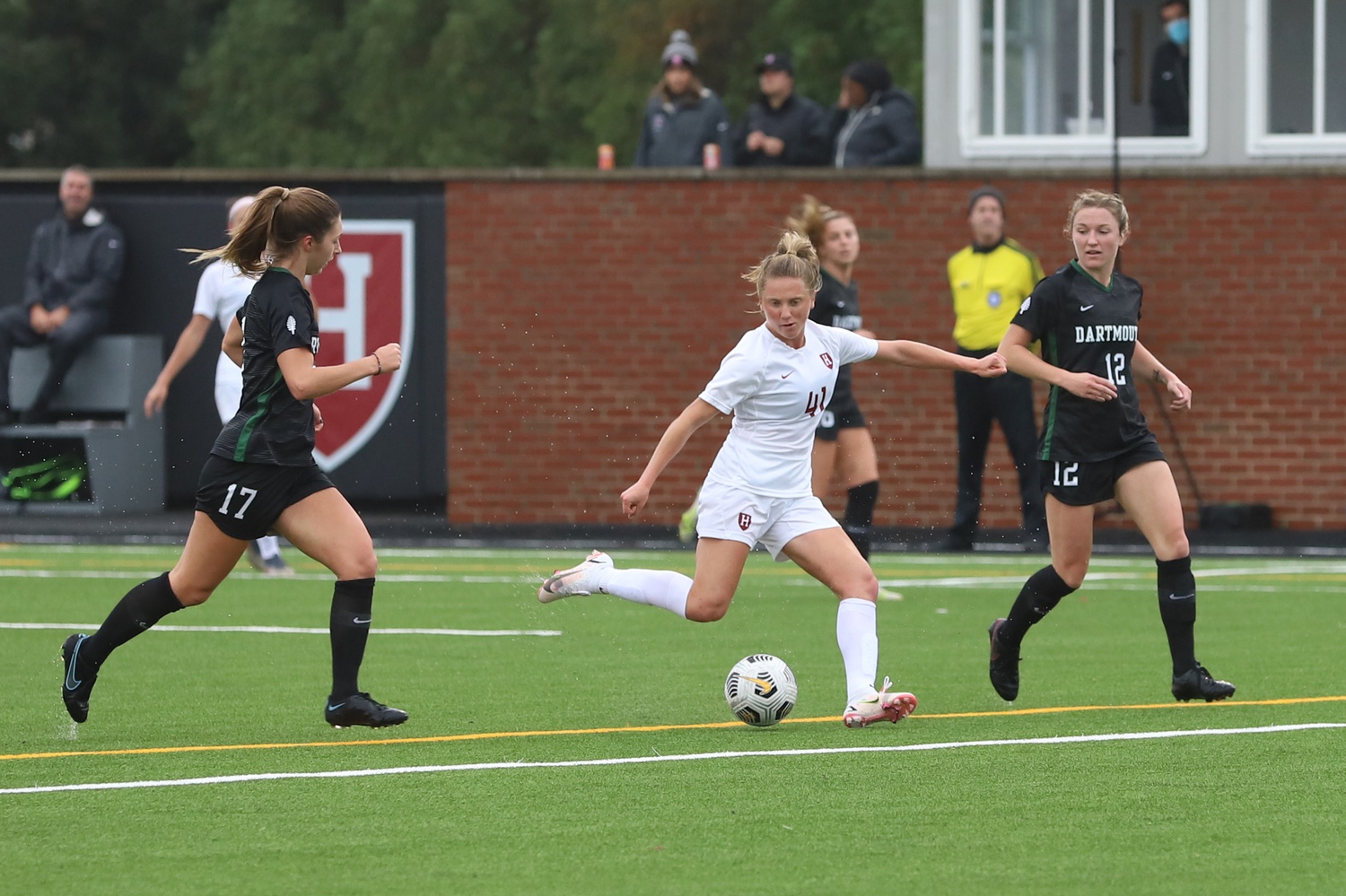 Midfielder Hannah Bebar fires a shot against Dartmouth on October 30, 2021. Bebar, now a rising second semester sophomore, tallied a score and assist in the 3-1 win over the Big Green. By Owen A. Berger

The spring provided Harvard the chance to focus on development both on and off the field while also giving opportunities for the squad to experiment with players at different positions and looks. The summer presents another window to continue this growth on a more individualized basis as players are spread out across the country and globe. Hamblin said the coaching staff asks players to maintain fitness levels and get touches, which looks different for players depending on their summer scenarios.

Many players are competing with club teams in semi-professional leagues this summer, and some of them are also balancing their summer training with other commitments such as internships or jobs or family trips, according to Hamblin.

Despite the distance, the team remains united over the summer through consistent communication from the coaching staff and communication among training group pods of three.

“If we are able to work together to become our best selves, then we're gonna put ourselves in a very strong position,” Hamblin explained. “I think how far we go is going to be based on how well we can execute, and how well we can come together as a group, especially through challenge.”

Coming together as a group will look a little different this fall. The team is welcoming an incoming first-year class of five recruits, which will mark a significant shift from last fall, when the team welcomed twelve new faces to the squad as both the Class of 2024 and Class of 2025 played with the team for the first time after the cancellation of the 2020-2021 Ivy League season.

“We feel that the incoming class [is] very talented, and all have had a lot of good experiences,” Hamblin said.

“We feel we have such a strong core that now we’re not going to need to rely on any of our incoming freshmen to get the job done; they’re going to be able to earn opportunities for playing time, and that’s a really cool situation to be in as a coach,” Hamblin said. “You’ve got what you need in the returning group, and the first-years, they’re going to come in and just challenge and push for playing time right away.”

The promising trajectory of a hungry and accomplished but not-yet-satisfied team with a great incoming class and clear goals — capturing a championship and becoming the best team in Ivy League history — gives Harvard soccer fans big things to look forward to come the fall. When it does come, Jordan Field will be packed, goals will be scored, and championships will be chased. As summer begins, Crimson fans can’t wait for it to end.

— Staff writer and women’s soccer beat writer Zing Gee can be reached at zing.gee@thecrimson.com. Follow him on Twitter @zing401.