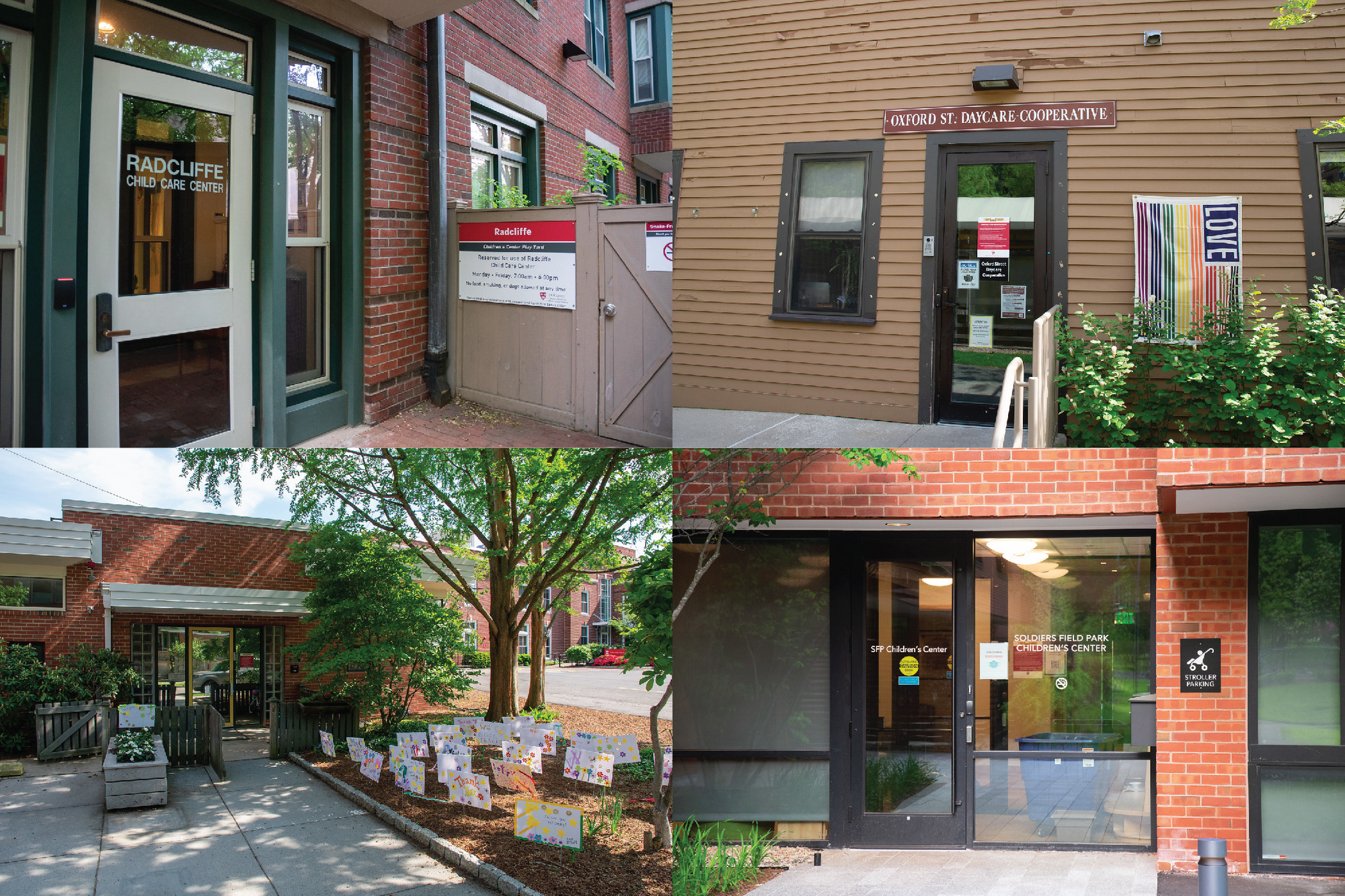 By now, the challenges of parenting during a pandemic have become so well-known they’re almost trite: crying babies interrupting Zoom presentations, toddlers running into video backgrounds, little kids clamoring for homework help as their parents juggle cooking, cleaning, and their careers all under one roof.

At Harvard, however, working parents report that Covid-19 has also magnified the shortcomings of the University’s child care services.

Cambridge is a city known for its high cost of living, said Maya Sen, a professor at the Harvard Kennedy School and mother of two, so “child care costs are really expensive and child care availability is really limited.”

Campus Child Care, Inc. is an independent non-profit that operates six child care centers for Harvard affiliates and local Boston and Cambridge residents. At CCC, the cost of one month of tuition ranges from $2,160 for preschoolers to $3,400 for infants.

Through the University’s Access to Child Care Excellence, Services, and Support program, tenure-track and senior non-tenure-track faculty are prioritized for spots at the CCC centers, but the openings are so limited that they are not guaranteed.

Adnan K. Syed, a sixth-year postdoctoral fellow, recounted that some faculty in his department who were starting families were uncertain whether their children could find a spot in Harvard’s child care centers.

And the odds are even slimmer for non-faculty like Syed himself, who has a young daughter: “So what’s going to happen with a postdoc if the faculty aren’t even getting promised [spots]?”

Neither the ACCESS program, which grants faculty scholarships for CCC tuition alongside priority enrollment, nor the Dependent Care Fund, which subsidizes professional travel costs for tenure-track faculty with children, are available to postdocs or graduate students.

As a result, many have struggled to make ends meet. Kelsey Tyssowski, co-president of the Faculty of Arts and Sciences Postdoc Association, said postdoctoral fellows experience a “​​lack of support” from Harvard in addition to “less disposable income and less career security.”

“We make a lot less money than faculty and therefore often have much more limited child care options,” Tyssowski said. “It’s a real struggle for a lot of people just to afford daycare, and I think Harvard could do a lot more to support postdocs by providing child care subsidies, even outside of the pandemic.”

Nicholas Short, a Ph.D. candidate in Government and Social Policy, said that paying for University child care on a graduate student stipend put his family “under tremendous, tremendous financial strain.”

Then, after Short accepted a fellowship from Harvard to fund the completion of his dissertation, he discovered that his new status as a fellow now disqualified him from certain benefits he’d received in the past, such as partial reimbursements for child care and his children’s medical and dental insurance.

“It just left me with the impression that it’s not like the University is indifferent to the plight of student parents,” Short said. “It’s almost like they’re vindictive and out to get us in trying to make our

experiences as hard as possible.”

Even the parents fortunate enough to access Harvard’s child care centers are not always able to utilize them. During the pandemic, a combination of staffing shortages, Covid-19 outbreaks, and public health precautions forced the centers to intermittently shut down or run on limited hours.

According to Sen, the centers closed for four to five months starting in March 2020, and they reopened only part-time. Only some of the centers have since reopened full-time.

Conor J. Walsh, a professor of mechanical engineering at the School of Engineering and Applied Sciences, tallied up the shortened hours and full-day closures to estimate that his children have received 400 fewer hours of child care than usual since the beginning of 2022.

To make up the difference, parents had little option but to leave work to pick up or care for their children.

“It’s just really left parents in a huge lurch,” Sen said, adding, “now that it’s been dragging on for so long, it’s starting to very strongly negatively impact people’s careers and their ability to keep things together.”

Walsh echoed this sentiment, writing in an email that the “significant instability” of Harvard daycare availability has taken time away from his professional obligations.

“This made it very hard to find focused time for balancing all my University responsibilities (of teaching, research, mentoring, and service),” he wrote. “In reality many aspects suffered, but mostly the ability to spend quality time mentoring students and members of my research group.”

But tensions arose between faculty parents, who were calling for the reopening of child care centers, and the centers’ employees, who were concerned about the potential health risks of working through a pandemic.

“One side is mad about risk: exposure to illness and callousness of the faculty parents,” said Samuel J. Gershman, a Psychology professor with a child at one of the CCC centers. “And the faculty parents are mad that they’re being deprived of their work time and that these child care providers are not providing child care.”

‘An Obstacle to Criticsm’

Gershman said that in January, faculty parents’ successful outcry for Harvard to reopen campus daycare centers led to “a pretty problematic rupture in the relationship between parents and teachers — which is really not something you want if you’re putting your small children in the care of other people.”

He noted that the University has made some progress in improving its child care services, citing the implementation of Covid-19 testing programs and the construction of a new child care center in Allston.

“I do believe that the University has a lot of goodwill and is trying hard to meet this very challenging situation,” Gershman said, but “the needs are greater than what Harvard is willing to meet at this point.”

But Syed said when he raised concerns about unequal access to child care services for postdocs as compared to faculty, administrators were unsympathetic.

“When I complain about it, I’ve literally been told by the administration, ‘if you don’t like it here, it’s your choice to be here. You can go get a postdoc somewhere else, where you’re treated better,’” Syed said.

Some faculty members feel unable to bring up these concerns to their supervisors at all, for fear of jeopardizing their future career opportunities.

The Office of the Senior Vice Provost for Faculty Development and Diversity administers the ACCESS Program and Dependent Care Fund to assist faculty with their child care needs — and its top administrator also plays a key role in the tenure promotion process.

The stated goal of the office is to “recruit and retain outstanding scholars and teachers as we continue to diversify the faculty.”

Judith D. Singer, who did not respond to a request for comment, has served as its head since 2008. She serves as a “key adviser” in the ad hoc tenure process, according to her Harvard bio, and the chair of the Provost’s Review Committee on Faculty Appointments.

Gershman said this “poses an obstacle to criticism” for faculty parents without tenure to freely voice their concerns about campus child care shortcomings.

“If you want people to give you honest feedback, or to be able to advocate for themselves, then you have to create conditions in which they don’t feel like their jobs are jeopardized,” he said. “I’m not suggesting anything nefarious here. It’s just one reason why some people feel more comfortable advocating in this area than others.”

One untenured junior faculty member, who requested to remain anonymous for fear of retaliation, said she worried about having discussions regarding child care with administrators involved in the tenure process.

“Every parent recognizes how much everyone is trying to make child care work and how difficult it is to do that in a pandemic, but it’s hard to have those conversations with the same people that are assessing your tenure case,” she said.

“I would like to separate my child care and my job, because it just gets awfully complicated,” she added.

‘An Equation that Doesn’t Add Up’

The FD&D mission statement says that the office is “especially attentive to … the concerns of women and minority faculty at all academic ranks.”

“Being a mom who is responsive” and a tenure-track faculty member “sometimes feels like it’s hard to do both at once,” the junior faculty member said.

“And when the child care is not reliable, it feels like that’s an equation that doesn’t add up,” she said.

“People wonder why we don’t have a lot of minority people in our postdoc population — I think that’s one real clear reason why,” Syed said. “It’s not that they don’t want to be at Harvard or they’re not good enough to be here. It’s that they simply can’t afford it.”

“I’ve constantly been put in this position of ‘do I choose my career or do I choose my family?’” he said. “That should never be a situation anybody is in.”