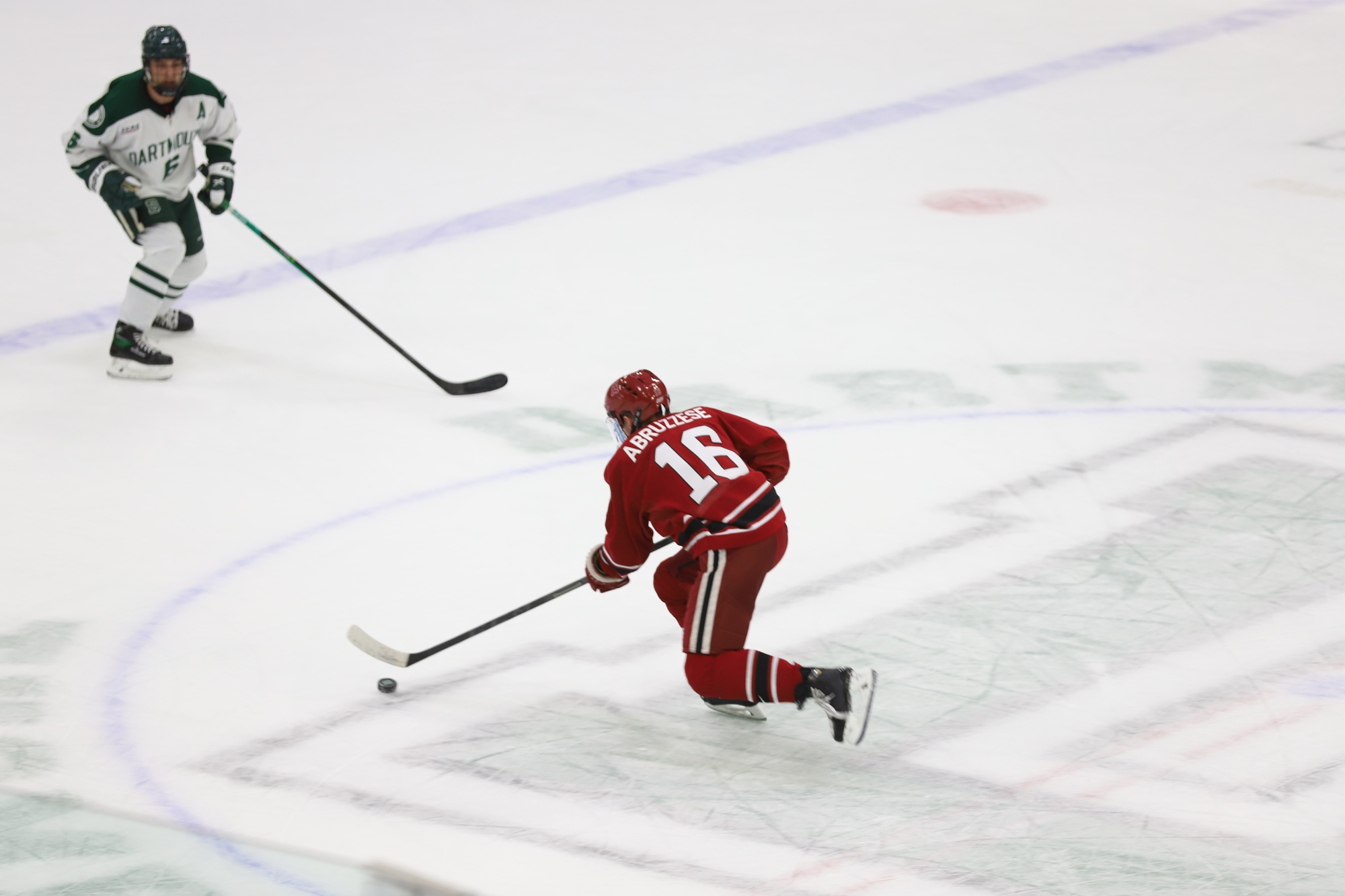 Ice in His Veins: Nick Abruzzese, Male Athlete of the Year

By Aaron B. Shuchman, Crimson Staff Writer
Junior forward and captain Nick Abruzzese skates up the ice in a 9-3 win over Dartmouth on Oct. 29, 2021 in Hanover, N.H. Abruzzese's nine goals and 24 assists helped the Crimson claim the ECAC championship. By Owen A. Berger

Abruzzese, a native of Slate Hill, N.Y., began his career in the North Jersey Avalanche youth program before joining the Chicago Steel of the United States Hockey League, the highest level of junior hockey in the U.S. With the Steel, he recorded 116 points (42 goals, 74 points) in 118 games over two seasons, eventually being named an alternate captain. In June 2019, Abruzzese was selected in the fourth round — 124th overall — by the Toronto Maple Leafs in the 2019 NHL Entry Draft.

Abruzzese quickly rewarded the Maple Leafs’ selection with an outstanding first season at Harvard in 2019-2020, notching 44 points (14 goals, 30 assists) in 31 games. After the season, he was named the ECAC Hockey Rookie of the Year while earning spots on the All-ECAC Hockey First Team and the ECAC All-Rookie Team.

Upon the Crimson’s return to play in 2021-22, Abruzzese was voted a team captain by his teammates, and he continued his collegiate career with a strong junior season, tallying 33 points (nine goals, 24 assists) en route to being named Ivy League Player of the Year, earning another berth on the All-ECAC Hockey First Team, and being named a First-Team All-American. 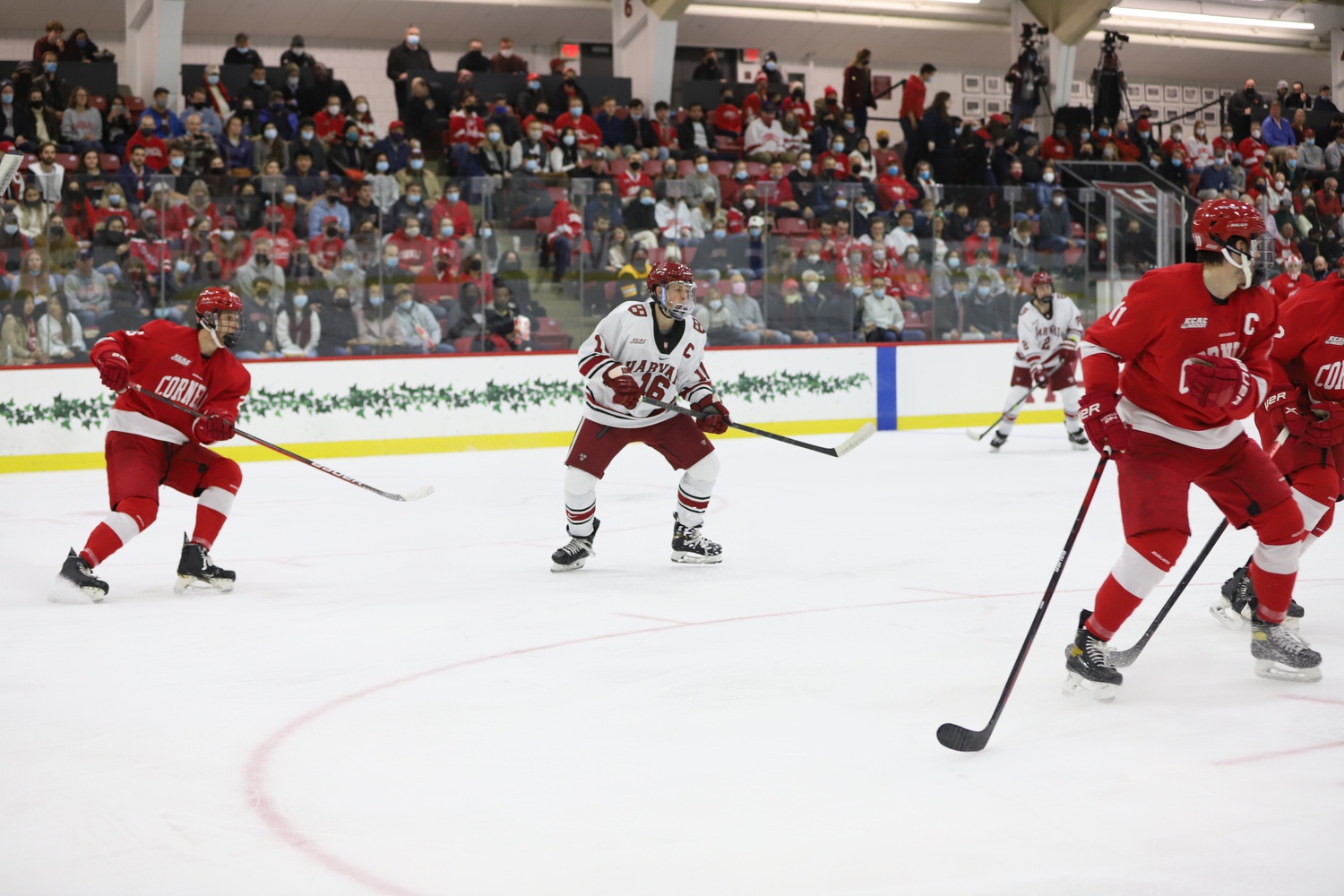 Junior forward and captain Nick Abruzzese awaits the puck amid a sea of Cornell defenders in a 3-2 victory over the Big Red on Nov. 5. The Slate Hill, N.Y. native capped off his season by making his professional debut with the Toronto Maple Leafs. By Owen A. Berger

“At Harvard, the captains are elected by their peers, the other players on the team. I think it speaks to how others on the team felt about Nick as a leader and his character,” Harvard head coach Ted Donato said earlier this season. “We are very appreciative of the level of leadership and character that Nick brought every day into the program…having two classes of kids that haven't played at the collegiate level. For us, I thought Nick, along with [co-captain senior forward] Casey Dornach, did an incredible job unifying the group and I thought Nick's leadership was essential to the team's success.”

Midway through his junior season in Cambridge, Abruzzese and teammate sophomore forward Sean Farrell were selected to play on Team USA at the 2022 Beijing Winter Olympics after the NHL declined to allow its players to participate. Abruzzese recorded four points (one goal, three assists) in four games at the Olympic Games before the U.S. was eliminated by Slovakia in the tournament’s knockout round.

Abruzzese returned from the Olympics to play in the Crimson’s final two home games of the season, helping spur the team to a 4-3 win over Princeton on Feb. 18 and a 1-0 defeat of the No. 4 Quinnipiac Bobcats on Senior Night the following evening. Those victories secured a first-round bye and first-round home ice advantage in the ECAC postseason tournament, the first time Harvard was able to participate since prior to the pandemic.

In the first round of the ECAC playoffs against Rensselaer Polytechnic Institute, Abruzzese recorded three points (one goal, two assists) to guide the Crimson to a thrilling 2-1 series victory to move on to the semifinals. In Game 1, Harvard erased a 3-0 deficit in the final two minutes of the game, with Abruzzese assisting on first-year forward Matthew Coronato’s game-tying goal with 15 seconds to play in regulation. The Crimson would ultimately go on to win the game in overtime. After dropping Game 2 to the Engineers, 4-3, in double overtime, Abruzzese recorded an assist on another Coronato goal that secured a 3-1 Game 3 victory for the Crimson, which sent it to the ECAC semifinals in Lake Placid, N.Y. 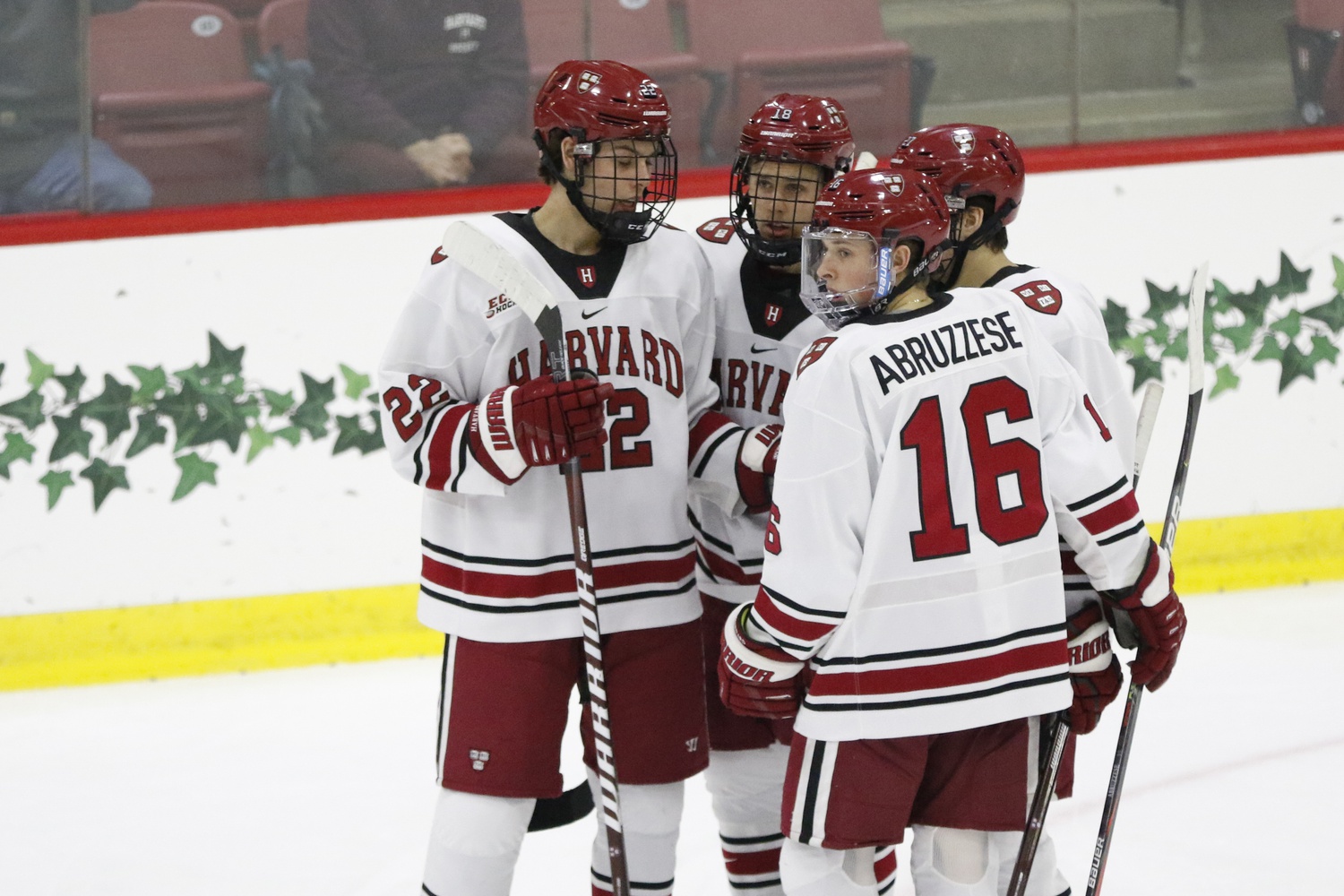 Junior forward and captain Nick Abruzzese celebrates with his team in a 7-1 victory over St. Lawrence on March 7, 2020. Abruzzese's leadership was critical in Harvard's 2022 ECAC triumph. By Timothy R. O'Meara

Abruzzese was dominant in Harvard’s 5-3 semifinal victory over the Clarkson Golden Knights, recording two goals and two assists to lead the Crimson into the championship game. After assisting on Farrell’s opening goal midway through the first period, Abruzzese put the Crimson on top 2-1 midway through the second period when he batted a loose puck out of the air and into the net after a shot by first-year defenseman Ian Moore.

Despite facing a 3-2 deficit entering the third period, Abruzzese and his linemates took over the game, as the co-captain tied the game at 3-3 by jamming in a rebound before making a spinning backhand pass to assist Coronato on the go-ahead goal to put Harvard up for good. In the ECAC title game the next day, Abruzzese’s line continued to click, producing a goal to put the Crimson up 2-1 in the second period and later connecting on Coronato’s overtime winner to secure the Whitelaw Cup and an automatic berth in the NCAA tournament.

In the Crimson’s NCAA tournament game against Minnesota State, Harvard was faced with an early 3-0 deficit before Abruzzese’s line again connected to cut the deficit to 3-1 and energize the Crimson offense. First-year forward Alex Gaffney would score just seconds later to cut the deficit to 3-2. Despite later facing a 4-2 deficit in the third period, Harvard again responded with a goal, but a furious comeback attempt in the final seconds fell just short and the Crimson were eliminated from the tournament with the 4-3 loss.

“They were doing a good job of getting in lanes,” Abruzzese said after the game. “They didn’t make it easy on us all night and the last 20 seconds was kind of a microcosm of that.”

It would prove to be his final appearance in a Harvard uniform, for his strong performance earned him the opportunity to take his talents to the next level. Days after the tournament loss, the Maple Leafs announced that they had signed Abruzzese to a two-year entry level contract worth $850,000 per season. He made his NHL debut for Toronto on April 4 at home against the Philadelphia Flyers, where he played just over nine minutes on 15 shifts. He recorded his first NHL goal against the Boston Bruins in Toronto’s final regular season game of the year when he deflected Maple Leafs defenseman Morgan Rielly’s shot past Bruins goaltender Jeremy Swayman.

“Nick's getting a chance to utilize his talents and his hard work and dedication to live out his dream,” said Donato after Abruzzese’s contract was announced. “It's exciting for us as coaches, it's exciting for his fellow teammates, and we certainly are really wishing him the very best.”