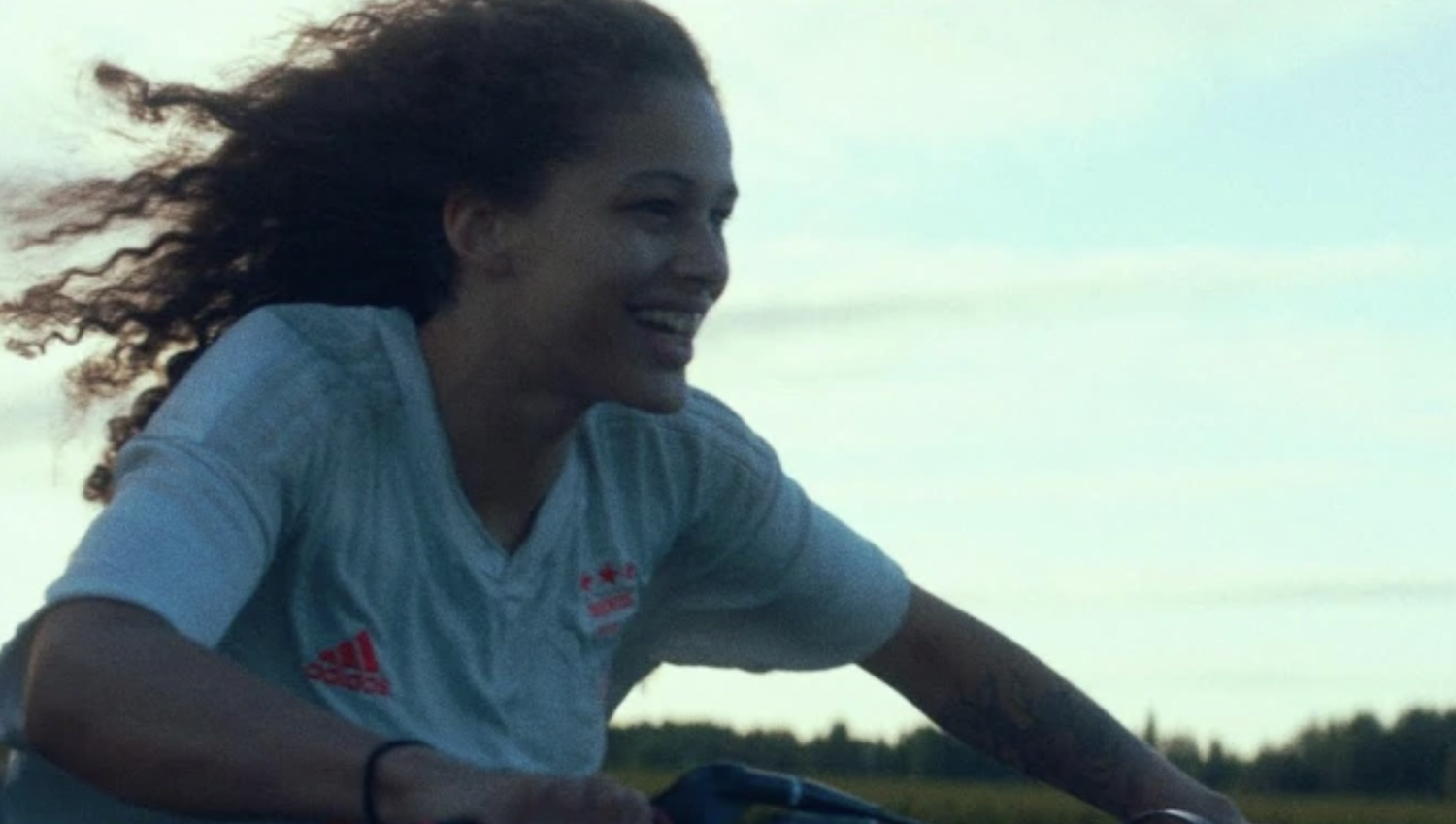 When Julia (Julie Ledru), the protagonist of Lola Quivoron’s electrifying new film “Rodeo” — which premiered on May 19 at the 2022 Cannes Film Festival — sets out to become a dirt bike stunt-racer, it seems that every possible obstacle is in her way. For one, she needs a bike. High-performing dirt bikes are expensive, hard to find, and even harder to hang onto in the run-down apartment complex in suburban France where she lives in a strained limbo with her family. But these circumstances won’t stop her; she develops a simple scam to swindle eBay sellers out of their bikes by taking them for a test ride, capitalizing on the (usually male) buyers’ tendency to brush her off as harmless.

From the early moment when she scrapes a handful of gravel into an empty purse, wipes her palms, then hands the bag to an unwitting seller as collateral while she takes off with his bike, her thorny fearlessness sets the tone of the film, bringing the audience into her obsession with achieving glory on the asphalt. Before long, Quiveron’s mesmerizing direction and heart-stopping script ensure the audience shares in this obsession, offering a glimpse into a hyper-competitive sport and its accompanying underground that few viewers may have encountered before.

Once Julia has a bike, she needs a gang. As Kaïs (Yanis Lafki) is quick to warn her when she approaches him to beg for spare gas at her first motocross meet, showing up alone leaves her totally vulnerable. The world of competitive biking is cutthroat and dangerous even for its top players, and a lone newcomer is more likely to have their bike lifted than receive a warm welcome. Nevermind that Julia is a woman, and everyone around her sees biking as a man’s game; the prospect of a female competitor strikes her male peers as laughable and then enraging, stoking resentment, harassment, and eventually threats of violence against her.

Quivoron’s pastiche of this first meet is dizzying. As a whirlwind of reckless bikers loop the track, one-upping one another, the spectacle is addictive yet edged with danger, both from the bikes and their riders. Quivoron’s vision of the racing scene is at once brutally fast and delicately lyrical: Through her lens, bikers move across the asphalt like armor-clad dancers, daring one another closer and closer to injury. Bolstered by cinematographer Raphaël Vandenbussche’s gritty, luminous visuals, Quivoron gazes on the bikers’ world with an outsider’s awe and an insider’s intimacy, making it impossible to look away as Julia wheedles her way into a crew.

She manages to get in with Kaïs’ group, the Be-More’s, who operate a shadowy underground garage at the strict direction of its incarcerated owner Domino (Sébastien Schroeder), who obsessively checks in on their activities via video chat. In the gang, Julia finds uneasy acceptance with most of her peers and endures simmering rage from a few, making it clear that her membership rests on shaky ground. She gains a modicum of security, though, when Domino realizes he may be able to capitalize on her exclusion from the male-dominated norms of biking and enlists her to steal bikes through her innocuous test-driving scam. As Julia struggles to reconcile her fierce independence with the intensifying control of the biker crew, Ledru deftly portrays the competing forces of determination, self-preservation, and desperation that drive her actions, delivering a mesmerizing and varied performance.

This film marks Ledru’s feature debut, and she conveys her character’s unshakable resolve and resourcefulness so movingly that it keeps the film from dragging in the slower second act. There, the story turns away from sport biking and Julia’s stunt ambitions to focus on her growing involvement in Domino’s world, from stealing bikes on his behalf to buying groceries for his family.

Once she’s fallen in with the crew, Julia has a shot at racing alongside real bikers in the motocross scene. But although she obsesses over stunt videos, she lacks basic skills. The film initially frames her training as her third obstacle, setting up an obvious but satisfying underdog-to-champion arc (like “Million Dollar Baby” on a tarmac track!). Instead, though, “Rodeo” leaves convention behind. In fact it leaves the matter of skills and stunts in the dust altogether, showing how Julia quickly moves on from dreaming of wheelies to planning elaborate bike heists. Quivoron movingly depicts how Julia’s passion for the sport becomes just another scheme for survival, and her life reorients around her new purpose of maintaining Domino’s favor and supporting his beleaguered wife Ophélie (Antonia Buresi). The film’s emotional undercurrent rises to the fore, transforming it from a sincere sports-hero story to a character-focused crime drama imbued with grim realism.

In the hands of a less skilled director, this pivot could drain the film of its momentum or adrenaline. Instead, as Quivoron details Julia’s involvement in her gang’s social scene and criminal efforts, the pace slows enough to cast the main characters in sharper focus and draw their relationships with renewed depth, lending the film new heart and higher stakes. Julia’s friendship with Ophélie is a highlight of the story, placing the pair’s respective independence and captivity in contrast to underscore how men ultimately exert control over them and the world they live in. The film is both a window into the pervasive misogyny endemic to the underground biking scene and a broader commentary on the way men are threatened by female independence, often reacting not just abstractly but with physical intimidation, harassment, and control.

In the midst of all these tribulations, Quivoron never trivializes Julia’s love for biking. Instead, she shows how it brings her a deep and singular joy, portraying the all-consuming thrill of her rides. Throughout the film, road-biking sequences lift off the screen with their lush vitality, bridging the gap between the sharp-edged world of motocross and the bleak reality of Julia’s home life. Julia’s relationship with biking is one of liberation, as Quivoron illustrates. As she navigates between hostile environments and struggles against forces of loneliness, poverty, and cruelty, biking offers a meditative reprieve. But as Quivoron’s stinging, feminist film asks: Can this sanctuary survive the crushing pressures of Julia’s life?