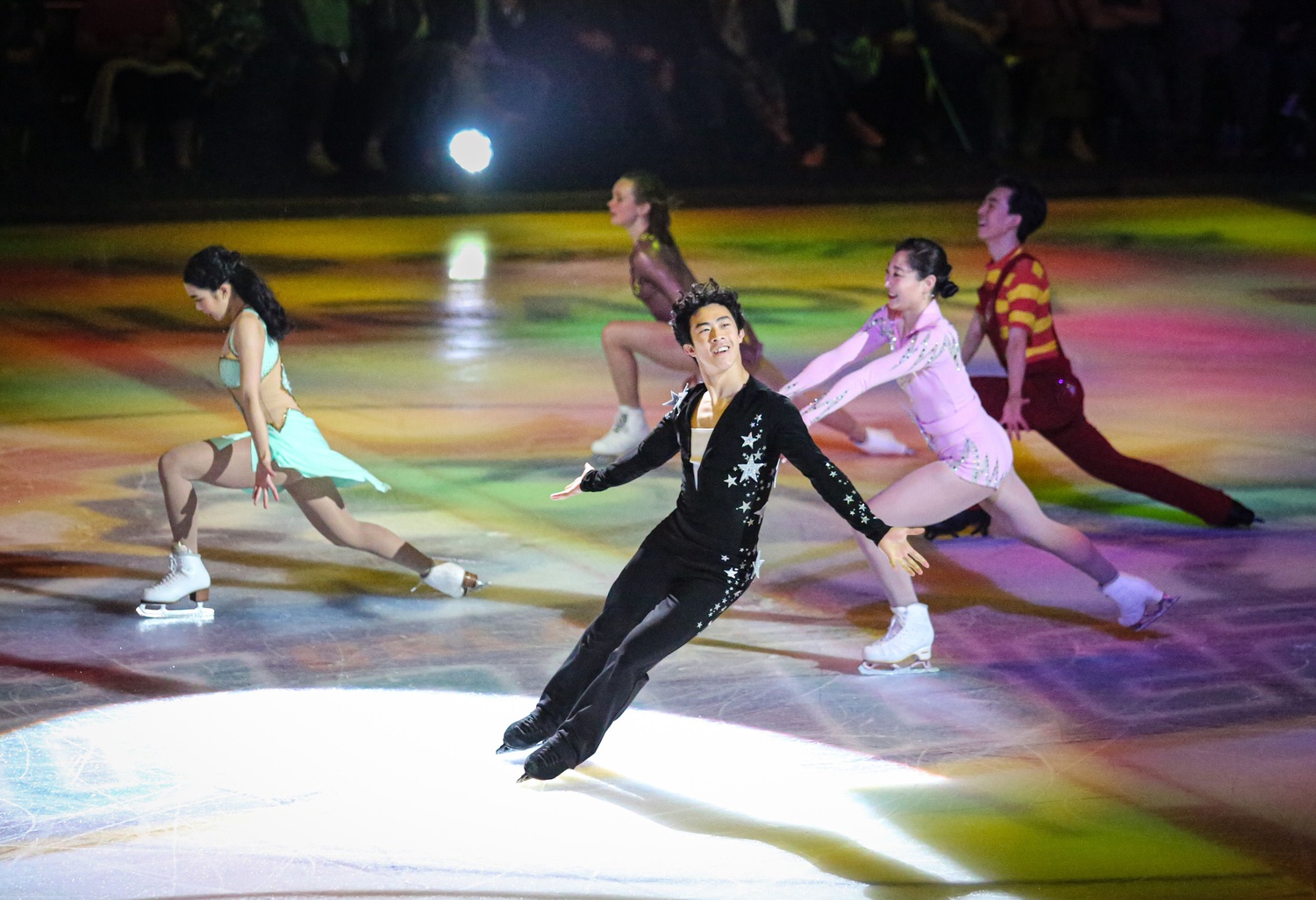 Nathan Chen and a group of skaters take the ice at Boston University's Agganis Arena. By Courtesy of Olga Trofimova
By Brady M. Connolly and Monique I. Vobecky, Crimson Staff Writers

It’s not every day that world-renowned figure skaters, many fresh off their performances at the Winter Olympics in Beijing this February, come to skate in Boston. But on April 30, 17 such skaters headlined the national “Stars On Ice” tour at Boston University’s Agganis Arena. With a mix of both individual, pair, and group performances, the show was a theatrical spectacle of bright lights, mash-ups of hit songs, and mystifying on-ice stunts.

To start off the program, the entire group skated to the AC/DC song “Thunderstruck.” This old-school rock classic perfectly set the tone for the upbeat performances to follow. Moreover, it was great fun to see all the skaters interact with each other before splitting off into their respective individual and pair acts, as the group seemed to have a playful rapport that hinted at months of rehearsals and touring.

The most famous skater of the bunch was Yale’s own Nathan Chen, who won his first Olympic gold medal in February with a dominating score that was 22 points above his closest competitor. When Chen entered the arena for his first performance (set to the tune of “Space Song” by Beach House), the crowd erupted. Chen delivered on all fronts, beginning with a very mellow and technically precise routine that displayed a different side of the skater than the one fans are used to seeing.

Later in the night, Chen returned with the high-energy “Rocketman” routine that won him a gold medal and cemented his status as an international sensation. The stadium waited with palpable anticipation as Chen began, and he managed to capture lightning in a bottle once again with his astonishing quad jumps and a seemingly impossibly on-ice backflip. This performance alone, a true testament to the artistry and difficulty of figure skating, was worth the price of admission for the entire night.

Jason Brown, a skater with 22 international Senior medals for Team USA under his belt, didn’t disappoint. While Brown may not be as widely-known as Chen and others, he quickly became a crowd favorite by bringing an electrifying presence onto the ice with his physics-defying side splits and infectious energy. Even Brown’s bows were a source of joy, as he at one point waved to the crowd while doing snow angels on the ice.

Following Brown by executing tough sequences alongside distinctively energizing pop music, Olympic team member Mariah Bell was a hit on the ice. In the 2022 U.S. Figure Skating Championships, Bell earned the national title for women’s figure skating, being the oldest skater in 95 years to do so. Bell began skating to a “Chromatica” medley by Lady Gaga and finished the night with an orchestral cover of Adele’s “Easy on Me” by Momento. The popularity of both song selections elevated Bell’s routine in the crowd’s eyes.

While the acts themselves did not adhere to a single theme, the combination of styles did not feel disjointed. Instead, it made for an enjoyable variety of upbeat, slowed down, and instrumental acts that allowed for many different kinds of routines. For those looking to witness a wide array of figure skating techniques and routines, this is the perfect show.

Ultimately, no skater failed to bring their best to Boston as the show went off without a hitch, despite one odd and slightly misplaced “Squid Game” reference that seemed to pander to the many children in the crowd. Even casual figure skating fans will find themselves fascinated by the feats of athleticism on display at “Stars On Ice.” Tens across the board for all involved!