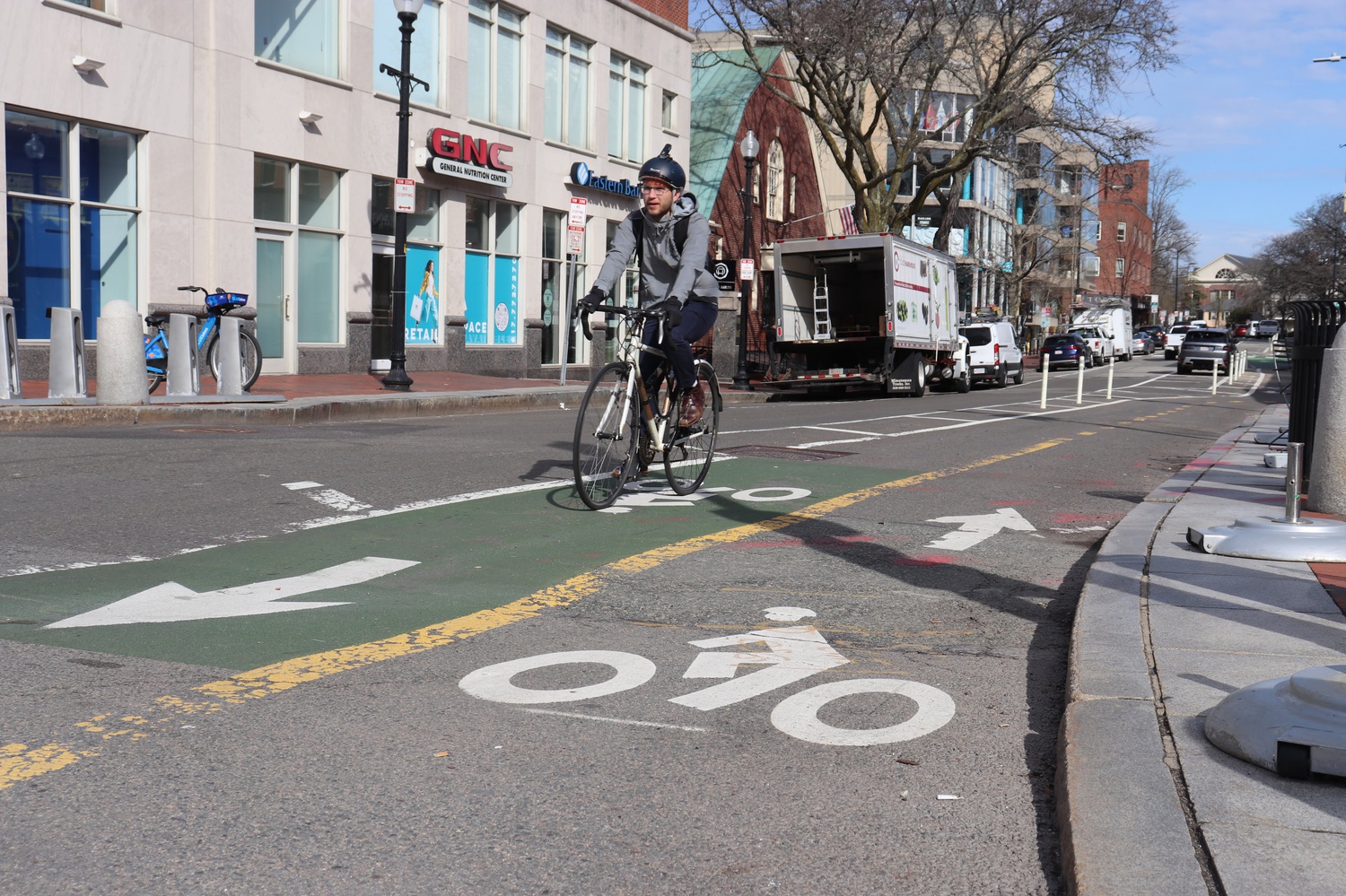 The Battle for Mass Ave

A silent fight is unfolding within the storefronts of Massachusetts Avenue.

On a short walk from the Quad to the Porter T stop, at least a dozen posters hanging in shop windows accuse the City of Cambridge of planning to “give away Porter Square.” The signs, distributed by a group called Porter Square Safety For All, have gone up over the past several months in opposition to a city plan that might seem like a crowd-pleaser: the construction of separated bike lanes along the entirety of Mass Ave.

In 2019, citing the need to “eliminate fatalities and injuries on City streets” and promote environmentally-friendly transportation, the Cambridge City Council passed the Cycling Safety Ordinance, which requires the construction of 22.6 miles of new separated bicycle lanes by May 2026. The law and its amendments, which expanded the project to encompass all of Mass Ave., have highlighted the difficulties of urban planning and transportation improvements when street space is a precious and limited commodity.

Opposition to the bike lane project largely comes from local business owners, who worry that the proposal will eliminate crucial parking spaces and drive down business. The Cycling Safety Ordinance leaves open several possible ways for the city to meet the bike lane requirement, including “quick-build bike lanes” (which separate cyclists from cars using temporary posts) and “construction” or “partial build” methods (which involve digging up the street to create a more permanent reconfiguration).

If the city fails to approve a construction timeline by April 30, the Ordinance requires the installation of quick-build lanes in the area surrounding Porter Square — a solution that, in some parts of the road, would remove virtually all curbside parking and loading spaces.

Charlie H. Bassile, the owner of Charlie’s Barbershop near Porter Square, worries that it will be “almost impossible to survive” such a sharp reduction in parking spots. Throughout his roughly 20 years of owning a business in Cambridge, Bassile says parking shortages have posed a consistent challenge. He feels that the city has rushed to a solution that will drastically reduce public access to his own business and others.

“I’ve been investing in that neighborhood for 30 years,” Bassile says. “I’m 55 years old now. I mean, for me to take my business somewhere else at this age — it’s almost impossible.”

Small businesses’ need for parking spaces has come into conflict with competing city interests: promoting road safety and encouraging more sustainable forms of travel. Chris A. Cassa, an assistant professor at Harvard Medical School and a volunteer with Cambridge Bicycle Safety, says he and others were drawn to cycling advocacy because of firsthand experience with the “stress” and “close calls” of biking on unprotected Cambridge streets. According to Cambridge Bicycle Safety, first responders attend to around 160 bicycle crashes each year.

“There are many, many people in Cambridge who have expressed that they’d love to bike more, but they just don’t feel safe,” Cassa says. Bike ridership has steadily increased in Cambridge for several decades and surged over the course of the pandemic, but according to Cassa, city planning hasn’t kept pace with residents’ changing lifestyles.

“The road design of Mass. Ave was made a really long time ago,” Cassa says, “and cities evolve and need to grow and need to reflect the uses of people that want to use the road.”

Makayla L. Comas, the community engagement manager at Livable Streets Alliance, agrees that separated bike lanes are a necessary adaptation for a city whose residents increasingly rely on bikes.

“​​People are biking, and that is just how folks in more urban areas are getting around these days,” Comas says. According to her, the remaining question is how to make these cyclists safer while meeting the needs of other groups.

It’s easy to interpret the controversy over the bike lane proposal as a black-and-white battle between two opposing camps — business owners on one side, cyclists on the other. But a closer look at the landscape of Massachusetts Avenue and the city at large reveals a much more nuanced problem. Somerville resident John R. Pecchia, for example, straddles the divide: as the owner of Get In Shape For Women, a local personal training studio, and a cyclist himself, he personally feels both the benefits and drawbacks of the proposal.

“My happy medium, personally, would be to still be able to see the bike lanes come in and become a better opportunity for bicyclists and pedestrians and automobiles,” Pecchia says. But he worries that the quick-build option will make his gym less accessible to out-of-town customers, and he feels that Cambridge hasn’t fully considered the potential burden on shops already reeling from the Covid-19 pandemic.

“I think a lot of the other businesses feel a little burned,” Pecchia says, “feeling like they’re just getting out of that hump, and now they’re going to have to try and pivot and then figure out how to navigate this extra chapter.”

Facing this complex intersection of needs, a group of Cambridge residents, business owners, and cycling advocates have banded together in an effort to promote a compromise. Mass Ave for All represents a local coalition arguing for a “partial build” option: removing the median from the center of Mass Ave. to make room for permanent bike lanes while maintaining about half the current street parking. The group’s website argues for a shift in priorities on Mass Ave. — away from private vehicle throughput and toward “safety for people traveling by public transportation, foot, or bicycle.”

For Cassa of Cambridge Bike Safety (which has supported Mass Ave. for All’s proposal), this marks a crucial shift.

The coalition, Cassa says, is focused on “making Mass Ave. just a nicer place to be, and not just being a regional highway for cars, and turning it into a place that people want to visit.” He points out that business owners often assume most of their customers arrive by car, when in reality, city data shows that only a third of Porter Square shoppers drive there — the rest are pedestrians, cyclists, and transit riders.

City Councilor and former Mayor Marc C. McGovern, who has advocated for protected bike lanes, believes that proactive communication and mitigation efforts from the city are key to building bridges between these various groups.

“That will alleviate a lot of the anxiety people have, if we say, ‘Look, we’re taking away 50 parking spaces, but we’re adding 30 of them back,’” McGovern says. This could be a real option, he explains, if the city leases private parking spaces and offers them to the public. “Everybody is going to have to give a little something to make this work,” he adds.

Comas agrees that building trust between the city government and the public will be crucial to resolving the Mass Ave. bike lane debate, as well as other road safety efforts in the future.

“If we, as a region, are going to push for affordable and sustainable transportation methods, planners also need to create community buy-in,” Comas says. “And there was no community buy-in, in particular from the loudest bit of the community, which was the business owners.”

Public controversy notwithstanding, the Cycling Safety Ordinance is settled law. Whether or not the city reaches a compromise on construction, protected bike lanes of some kind will be built along Mass Ave. in the next several years. Along less controversial sections of the road, 2.6 miles have already been installed. Still, many advocates on all sides agree that the tensions over the proposal reveal important lessons for the future.

“This is a way to really transform the urban corridor into something that works better for everyone,” Cassa says, “not just people in cars.”

McGovern agrees that Cambridge is at a turning point, with decision-makers rethinking the purpose of the city’s main artery.