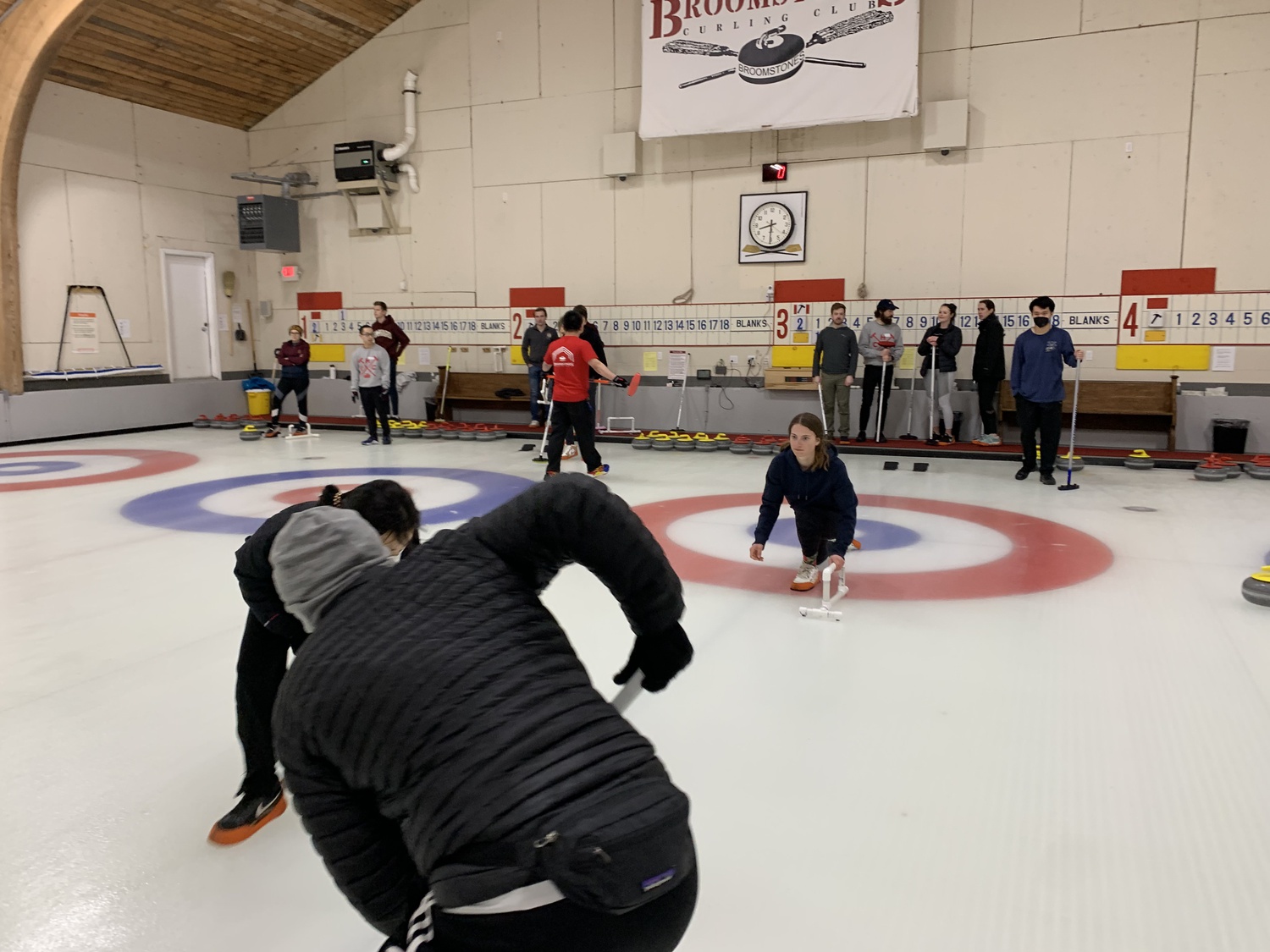 Curlers in action at the Broomstones curling rink. By Courtesy of Harvard Curling Club
Advertisement
Advertisement

Curling, we learn, is a lot like bowling, except more complicated, played in teams, and on ice.
By Hewson Duffy and Kyle L. Mandell

According to Harvard Curling Club President Kris B. King ’24, it’s tradition to bump fists with the opposing team and exchange an enthusiastic “good curling!” before the start of every match. Just as integral to the athletic component of the sport, King says, is the camaraderie, commonly referred to as the “spirit of curling.” This spirit pervaded the wood-paneled walls of Broomstones Curling Club in Wayland, Mass., last Sunday, where Harvard Curling hosted its last Learn-to-Curl event of the year after wrapping up a successful season.

Two years ago, facing pandemic cancellations and a host of graduating seniors, the future of the Curling Club looked grim. 2020 saw many curling clubs shut down, and the president of Harvard Curling at the time told King that their goal was just “to keep the club alive.” Under King’s leadership, however, the club has not only survived the pandemic but emerged from it stronger. A few weeks ago, at the first College Curling National Championship since 2019, the team finished fourth — a program record.

Curious to learn the secret behind the Curling Club’s national success, the two of us decided to head to Broomstones — located on the aptly named Curling Lane — with a smattering of Harvard students from across the College and the graduate schools whose reasons for attending ranged from devoted fandom to passing interest. Tali Wong ’25, for instance, made the decision to come out with some members of the Canadian Club after changing the channel to Olympic curling at a Super Bowl watch party.

After putting on bright orange rubber shoe coverings called “grippers,” which keep rookies from slipping on the ice, we split into small groups and head out onto a large rink to practice the basics. First we lunge out onto the ice, using our body weight to push the smooth, 40-pound stones down the rink — a move called the “delivery.” Next, armed with small brooms, we learn to frantically sweep the ice in front of the sliding stones, activating muscles we didn’t know we had.

Soon the room is filled with the low rumbling of deliveries and the over-the-top cries of veteran curlers directing our sweeping: “Yes! Hardline… yes, WHOA,” at which point we lift our brooms. The absurdity of the activity is matched only by the team’s genuine passion for teaching us how to play.

Finally, we’re ready to face off. Within our groups, we choose roles — lead, second, vice, and skip — and assume our spots on the ice, preparing for the first launch.

Now comes the strategy. Curling, we learn, is a lot like bowling, except more complicated, played in teams, and on ice. Suddenly the aiming, delivering, and sweeping become part of an intricate calculus for how to disrupt the other team’s maneuvers and move our stones to the bullseye at the other end of the ice. The jovial atmosphere simmers into a focused hush.

Still, despite the competition inherent to the sport, veteran curlers say it always remains friendly. “There’s such a culture of being honest and nice to the people you curl against,” says Matt Pick, a third-year at Harvard Law School. Fraternizing with the enemy is the norm in curling, and Pick has always relished it.

Originally from Edmonton in Alberta, Canada, Pick curled throughout middle and high school and joined Harvard Curling last year. His experience isn’t very common; many other team members, including the president, didn’t start curling until college. The team’s openness, King says, distinguishes it from Harvard’s other varsity and club sports.

“I don’t think a lot of sports can say that they compete at a national level and you can walk on with absolutely no experience,” King says. 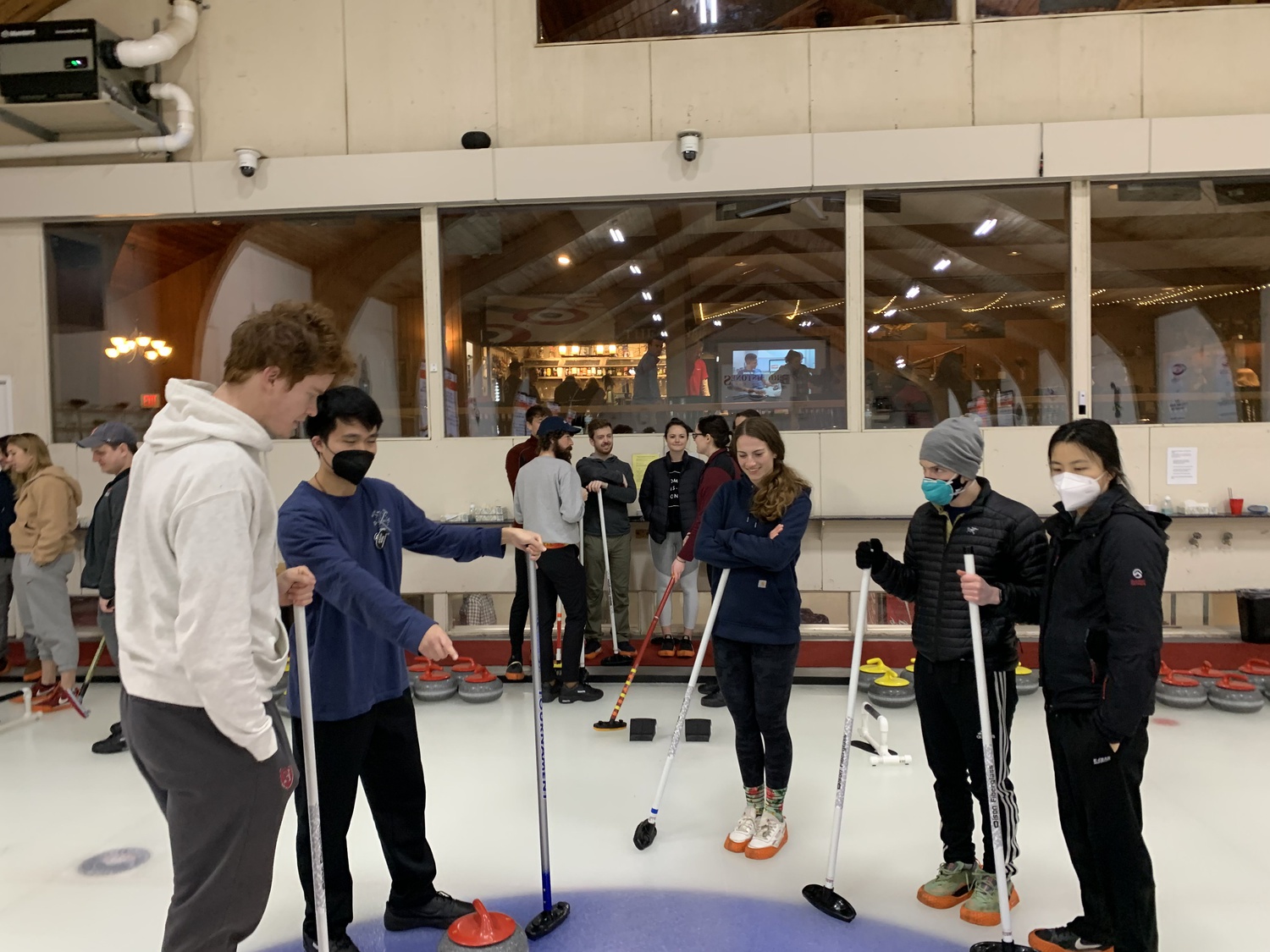 King also touts the club’s commitment to inclusion. The team boasts a no-questions-asked financial aid policy, provides equipment for its members, and does not divide its members based on gender.

“I’m queer and trans and autistic,” they say. “And it’s really important to me that folks who don’t fit into societal or curling norms can still play. Historically, especially at Harvard, curling has been a very queer-friendly sport.”

In the spirit of curling, we head into the Broomstone lounge after our matches for one final tradition: “broomstacking,” where opposing teams come together at a table and share drinks. In our version, we eat cake.

At this point, King takes a moment to toast the team’s triumph at nationals and recognize the graduating team members. A graduating player hands the nationals team homemade wooden medals. King gives send-off speeches so warm they leave us teary-eyed. Learn-to-Curl comes to a bittersweet close.

But luckily, all it takes is one session to be eligible to compete with the team — so maybe you’ll find us out on the rink at Harvard Curling’s next match on Friday, testing our new skills against MIT.