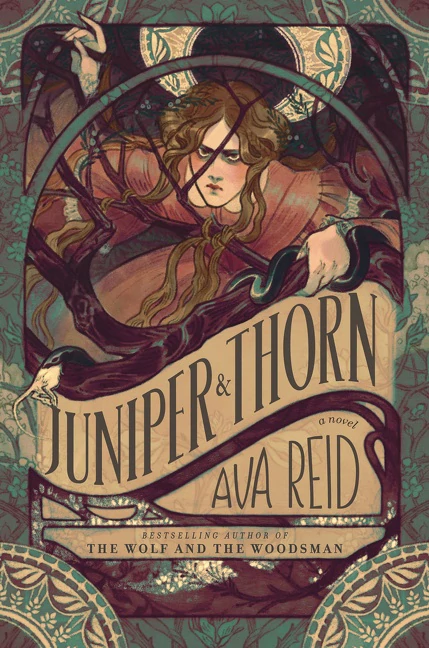 The cover of "Juniper & Thorn" by Ava Reid. By Courtesy of HarperCollins Publishers
By Samantha H. Chung, Crimson Staff Writer

After the 2021 release of her debut novel “The Wolf and the Woodsman,” Ava Reid has returned with the gothic fantasy-horror standalone “Juniper & Thorn.” Set in the world of “The Wolf and the Woodsman,” “Juniper & Thorn” is a fairytale, but not in the way that Disney has led one to expect. Instead, Reid’s novel expertly crafts a world of monsters and monstrous men to explore the consequences of patriarchy and trauma.

The novel is a loose retelling of “The Juniper Tree,” one of the Brothers’ Grimm most gruesome fairytales, in which an evil stepmother tricks her husband into unknowingly eating his own son for dinner. While the plot of “Juniper & Thorn” bears little resemblance to the original fairytale, it retains the grisly heart of the story. “Juniper & Thorn” is wickedly gory and revels in its more nightmarish aspects. What else could you expect from a novel whose source material is a story about cannibalism?

The novel follows Marlinchen and her two sisters, who live sequestered away from the rapidly industrializing city of Oblya. Locked in their home by their authoritarian wizard father, the three sisters are forced to use their magical abilities for money to feed themselves and their father, who has been cursed with perpetual hunger. When the sisters sneak into the city one night, Marlinchen meets Sevas, a ballet dancer with whom she quickly falls in love. But a murderous monster roaming through the city makes the outside world dangerous, and Marlinchen has to find a way to stop the killings before it’s too late.

The immersive setting of “Juniper & Thorn” is a standout. By setting the novel in Oblya, an Eastern European-inspired city where magic is being pushed out by science and technology, Reid creates a compelling universe populated with witches, wizards, and mythological creatures. The setting of “Juniper & Thorn” makes its horror sequences even more striking, as readers’ vision of a fairytale world is punctured by scenes of violence and death.

Another strength lies in the novel’s main character. Marlinchen is a convincing protagonist, although she’s not necessarily a standard heroine. For most of the novel, Marlinchen is not an active character. While her passivity might be frustrating to the reader, Reid does well in making her lack of resistance understandable and sympathetic in the context of the repressive world in which she lives. Marlinchen is portrayed as a victim of Oblya’s patriarchal society, and her perspective is an intriguing one from which to experience the story. “I would smile blithely if someone tried to saw off my leg,” Marlinchen narrates. “But no one had ever told me that I was allowed to scream.”

Perhaps most importantly, “Juniper & Thorn” offers a nuanced criticism of how patriarchal structures enable violence against women. Throughout the novel, Marlinchen is constantly seen by her father, her clients, and even herself as an object to be used by the men around her. Because of this, her self-objectification permeates the novel’s narrative style. This makes for a somewhat unsettling read, as the reader’s understanding of Marlinchen — as a young person unjustly robbed of her agency — conflicts with the unforgiving way that she views herself. For the most part, Reid handles this well and navigates this uncomfortable perspective with the necessary compassion and skill.

One minor issue with the novel is that while Marlinchen is the most compelling character, the side characters sometimes fall flat in comparison. In particular, Marlinchen’s two sisters are rather one-dimensional. Sevas also lacks some complexity, and Marlinchen’s romance with him isn’t entirely convincing. This, however, is only one small weak spot in the otherwise complex world that Reid has created.

“Juniper & Thorn” is a fairytale with teeth. Reid expertly strips back the skin of the world she has created to reveal its blood and guts, both literally and figuratively. Ultimately, “Juniper & Thorn” is well worth the read for anyone looking for a vividly written and darkly horrific fantasy story.

—Staff writer Samantha H. Chung can be reached at samantha.chung@thecrimson.com.