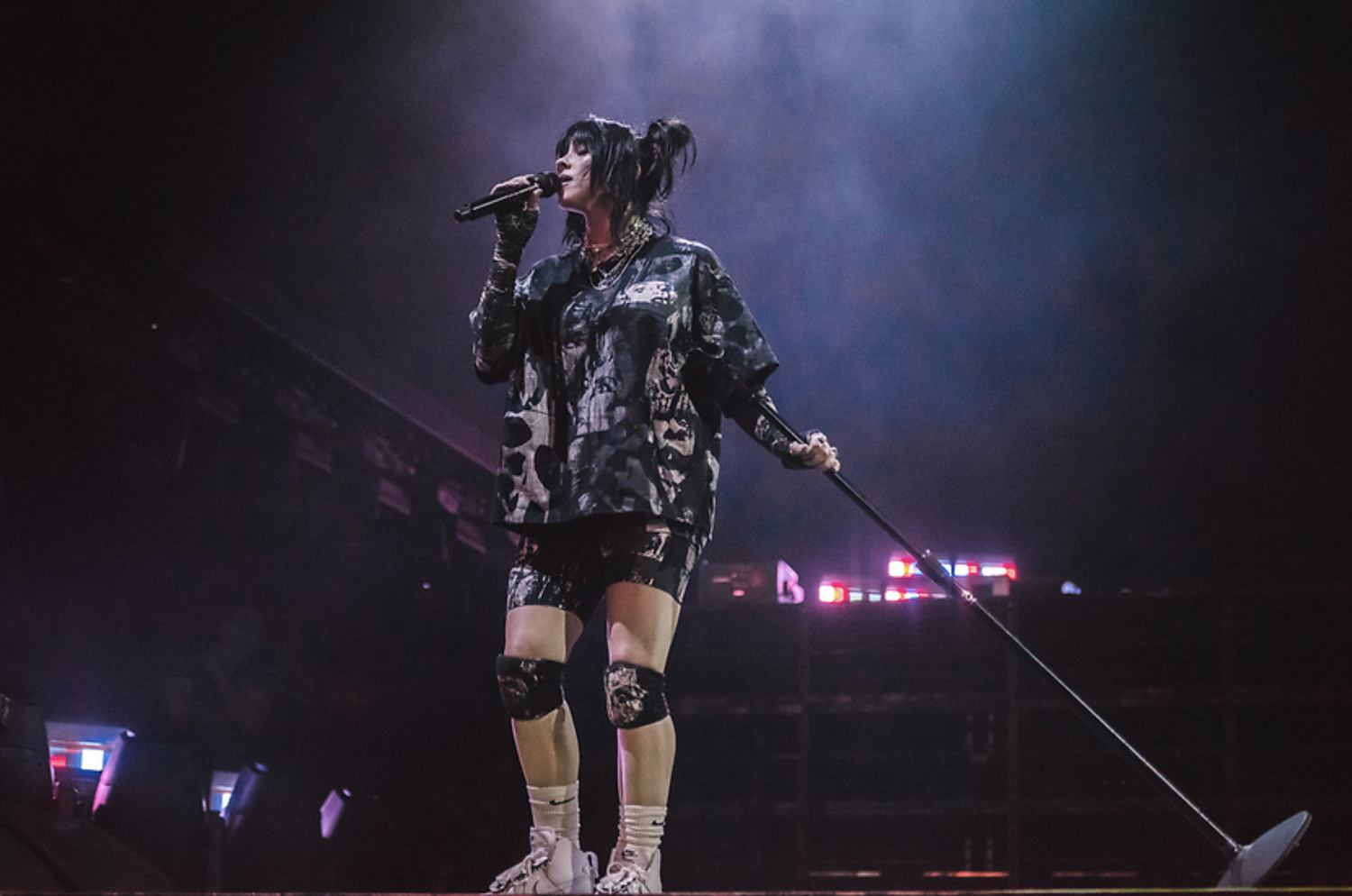 What made Eilish so enjoyable to watch was her candid charisma: her humor, relatability, and kindness. By Courtesy of Coachella / Andy Boyle
By A.J. Veneziano, Crimson Staff Writer

As the second day of the 2022 Coachella Music Festival came to a close and the fatigue began to set in for the tens of thousands of festival-goers, something exceptional was needed in order to recover the energy lost throughout the weekend. Twenty-year-old superstar Billie Eilish accomplished not only that with her set — she also delivered the best performance of the three-day festival.

From the very beginning of her set, Eilish’s stage presence was unbeatable. As the lights display flashed and “bury a friend” began to play, she strutted across the stage, making sinister faces and contorting her body into uncomfortable positions to the driving beat. Pictures of demons flooded the screens, and high-pitched screeches supplemented the track's sinister melody.

Eilish utilized the stage design effectively to facilitate engagement with the audience. During “I Didn’t Change My Number,”she spat all over the stage, literally marking her territory. Similarly, “NDA” saw her slowly walk up and down the catwalk, tilting her head back to orchestrate creepy dance moves. Background dancers in full-body latex suits floated in from stage left and marched across the stage like troops in a militia. On their cue, the tone shifted from one of creepiness to a semblance of sensuality.

Continuing with this more risqué tone, “NDA” blended into “Therefore I Am” as Eilish made her way to the center of the catwalk, directly in the center of the crowd. As the bass synth chords reverberated, Eilish slowly got down on her knees and grinded on the stage for a brief moment as the fans next to her on the catwalk screamed profusely. With the help of her knee pads, Eilish stood up and returned to the main stage to continue the firecracker set.

In addition to her expansive utilization of the slanted platform that served as her stage, the set design itself was unique to Eilish. Halfway through the show, Eilish stepped onto the tiny platform she’s been using throughout her bigger post-pandemic concerts, which was then raised into the air and rotated 360 degrees above the crowd. As she stood thirty feet in the sky, the entire audience caught an unobstructed glimpse of her, creating one of the coolest concert experiences of all time. Engulfed in light like an angel, she beautifully sang “ocean eyes,” projecting a melodic sweetness onto the crowd below her.

What truly made Eilish so enjoyable to watch, though, was her candid charisma: her humor, relatability, and kindness defined the night. She talked with the audience and wasn’t afraid to be goofy. For example, she made sure to remind the audience of her three rules: “don’t be an asshole, don’t judge those around you, and — most importantly — have fun, bitch!” Later, following “Getting Older” from 2021’s “Happier Than Ever” — which included a sentimental display of family photos — Eilish accidentally face-planted on the stage and recounted “I just ate shit up here . . . I tripped on the fucking fire thing.” 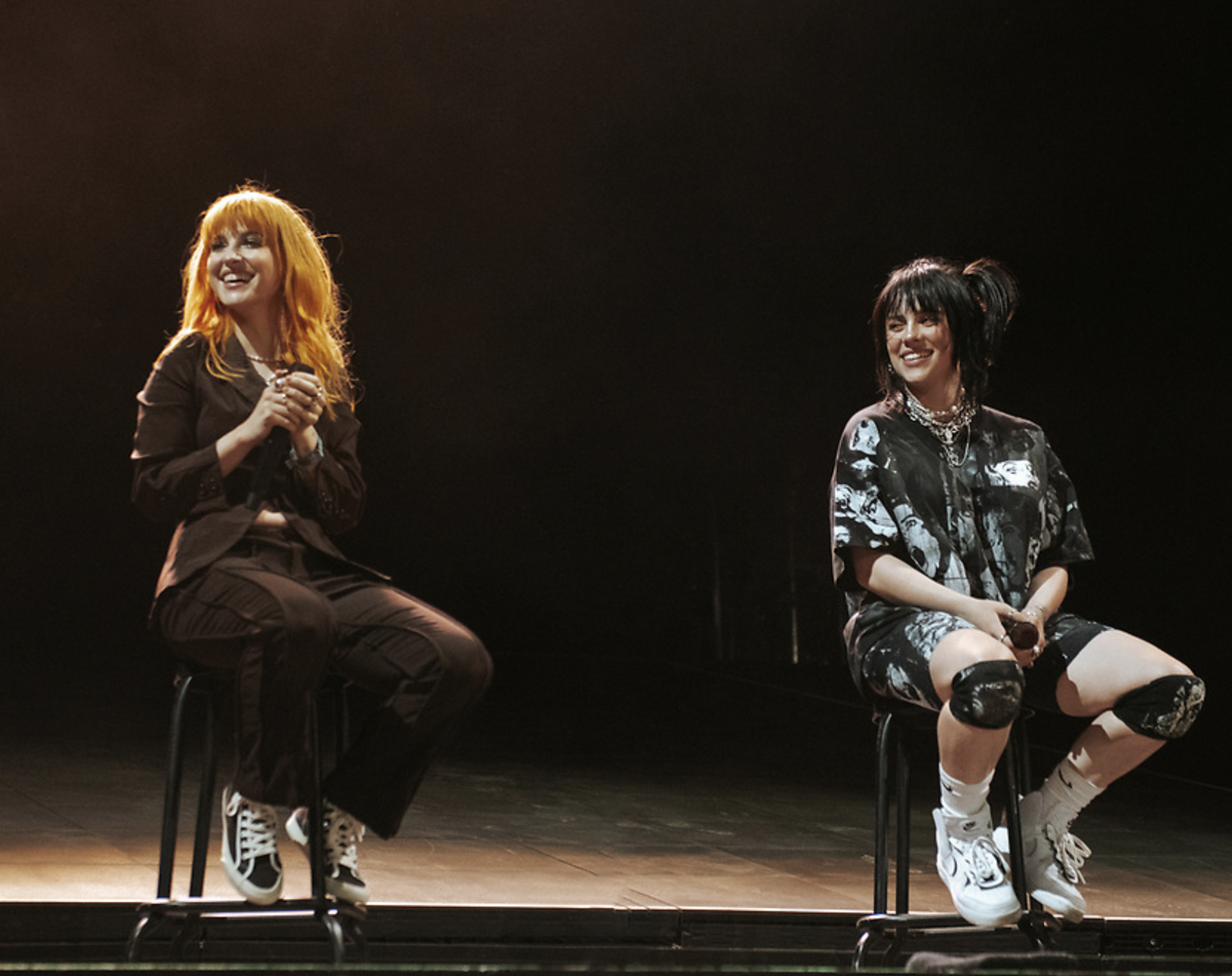 Thanks to her deliberate audience engagement and fun personality, Eilish’s performance was rife with incredibly memorable and sentimental moments alike. She often walked over to her brother, who performs under the name FINNEAS and playedo guitar and piano for Eilish’s set, confessing to the crowd about how her musical journey would be impossible without him. After Paramore’s Hayley Williams came on stage for a surprise performance of Paramore’s 2007 hit “Misery Business,” Eilish embraced Williams in a huge hug and rejoiced in their friendship. In another demonstration of love for her fans, Eilish delivered a speech about being accepting of everyone in our world while hoisting a pride flag.

Closing with the iconic sonic journey that is “Happier than Ever,” Eilish brought an end to an extraordinary concert. Her gorgeous, soft vocals flooded the main stage, and fans sang along in total unison. The sheer emotion in the space was astonishingly overwhelming in that moment: a communal atmosphere where everyone present was compelled to throw their hands in the air as if testifying to a gospel choir. A gleeful celebration ensued when the beat switched to welcome the faster, more punk-inspired portion of the track. The drums, guitar, and Eilish’s lead vocals combined with the audience’s screams to provide a perfect send-off to the second day of the festival.