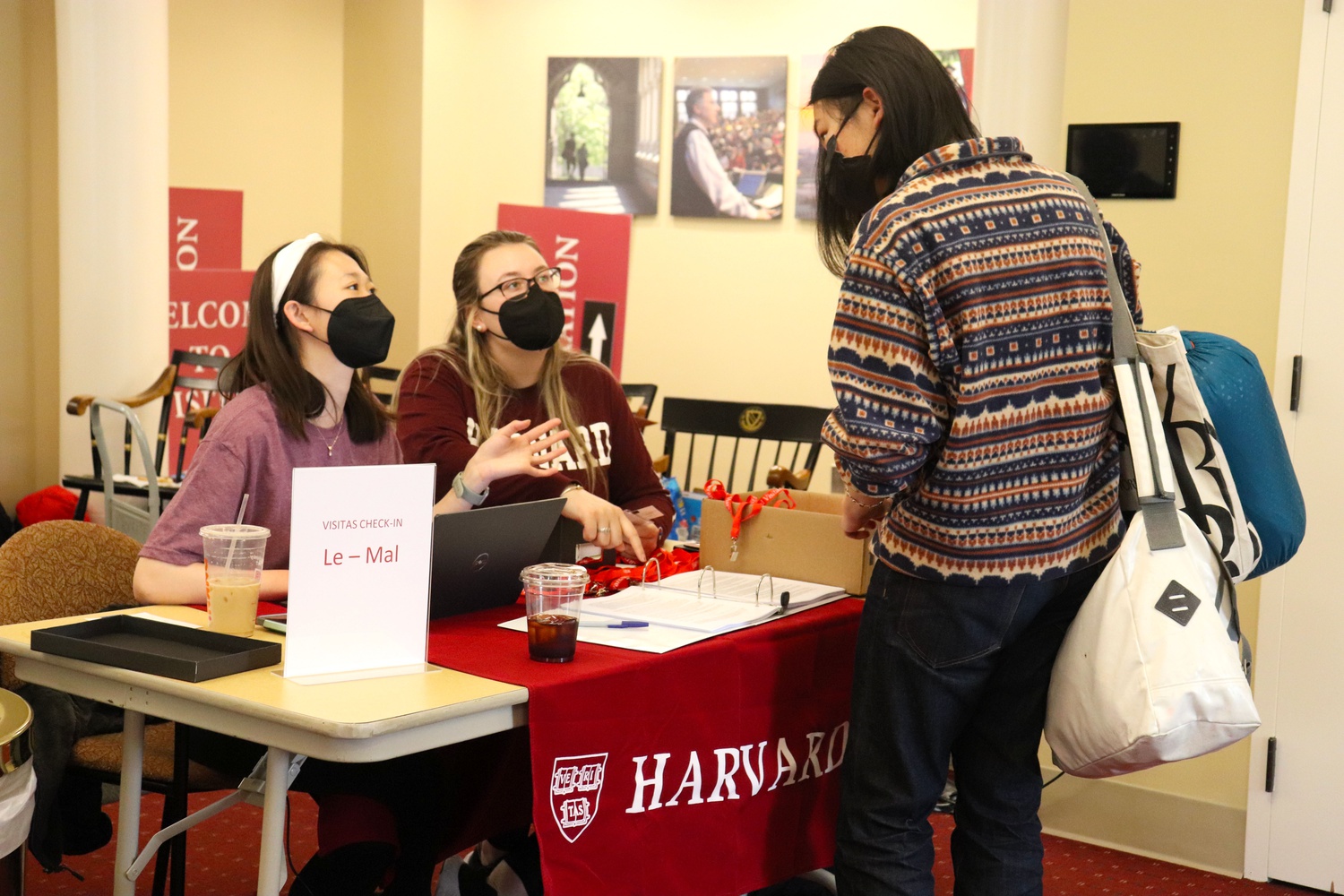 Prospective freshmen clad in Harvard merch and red lanyards swarmed campus this weekend for the College’s first in-person Visitas since 2019.

Current students hosted admitted members of the Class of 2026 for the two-day program, which took place Sunday and Monday. Visitas was held virtually for the Class of 2024 and Class of 2025 due to the pandemic.

Admitted students who attended this year’s Visitas called the weekend memorable and informative.

“I had Cane’s Chicken Fingers for the first time,” said Sazi T. Bongwe, an admitted student from Johannesburg, South Africa, who has already committed to Harvard. “I’d say that’s my most memorable memory.”

Prefrosh said socializing with their soon-to-be classmates was a meaningful part of the weekend.

“Mostly what stuck out to me, though, is everybody’s been really awesome,” Cole M. Salvador said. “Everybody I met has been so much fun to talk to.”

“I met a Brazilian person who's essentially interested in the same things I am — just in a Brazilian context, versus I have a South African context,” Bongwe said.

On Sunday night, prefrosh flocked to the Harvard Square Tasty Burger for a party held in their honor in the restaurant’s basement, a signature campus social space popularly known as “Tasty Basty.”

Students were also eager to get a taste of Harvard’s academic opportunities. Tracy Yuan, an admitted student, plans to concentrate in Applied Math and Biology but is looking forward to trying out other fields of study.

“I'm excited to explore the liberal arts education here as a STEM major because I'm also interested in diversifying my interests,” Yuan said.

Salvador also said he is excited to find his passion at Harvard.

“I'm really undecided,” he said. “So I think I want to take some Gen Eds and figure out my course schedule to really dive deep into what my academic interests are and figure that out for myself.”

On Sunday, organizers from nine campus activist groups staged a protest in Harvard’s Science Center Plaza, before marching through Harvard Yard to the John Harvard Statue. The protesters then relocated to the Student Organizations Center at Hilles to disrupt the Visitas Activities Fair held for prospective students.

Some prefrosh were unable to attend Sunday’s “Visitas Thinks Big!” panel, one of the College’s flagship Visitas events in which notable faculty present their research to admitted students. After Sanders Theatre reached capacity, dozens of prefrosh were redirected to a livestream of the event displayed in the Science Center.

Still, students who attended lauded the event. Fan called the lecture “quite excellent.”

Many Visitas attendees said their experience over the weekend reflected well on the College.

Admitted student Isaac A. Carreno said he is leaning toward committing to the school after Visitas gave him “a new light on Harvard.”

Bongwe said the campus atmosphere stood out to him.

“This place bustles, and there's an energy to it,” he said.

Some prospective students who had not yet committed to attending Harvard said this weekend solidified their decision.

João P.R. Frazão, an admitted student from Rio de Janeiro, Brazil, wanted to come to Visitas for “confirmation” that he liked Harvard.

“I wanted to commit for the right reasons, and I have the confirmation,” he said.

“I will be committing tomorrow,” said Sukhraj S. Dulay, an admitted student from Brampton, Ontario. “This was the deciding factor.”