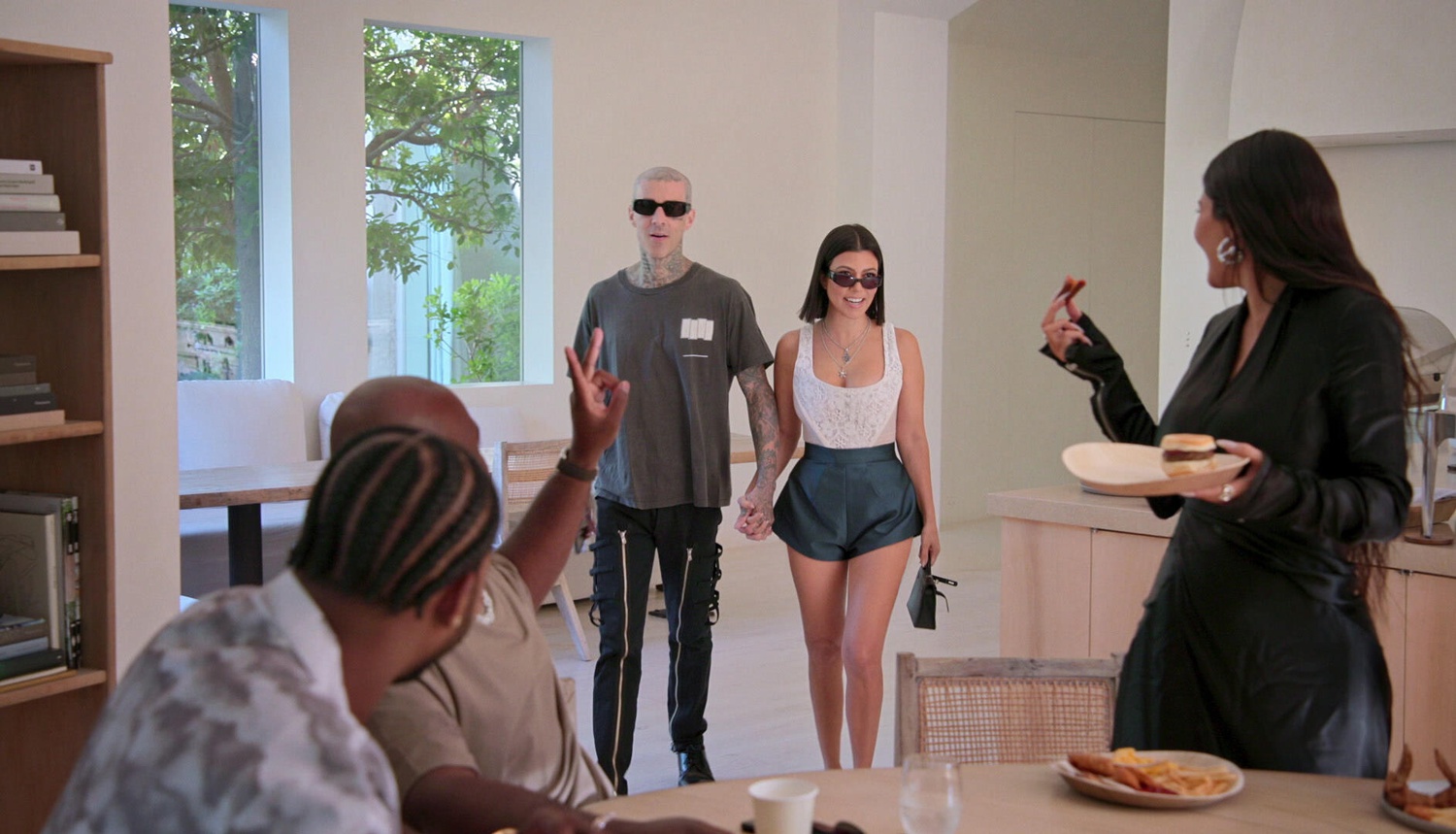 Travis Barker and Kourtney Kardashian appear in "The Kardashians." By Courtesy of Hulu
By Brady M. Connolly, Crimson Staff Writer

What do Roblox, Travis Barker, Diet Coke from the fountain, and “Saturday Night Live” all have in common? They are the pressing topics at the heart of the premiere episode of “The Kardashians,” the new Hulu show that centers on America’s unofficial first family. While the Kardashians may have logged 20 seasons of their previous reality show on E!, this new streaming series poses the opportunity for an even more honest and raw look at the California clan. However, it is far more likely that the impetus for switching platforms was a bigger payday for the business-savvy family and not a concern for the show’s creative integrity.

Does the show live up to these promises and provide a wholly new viewing experience? No — but “The Kardashians” remains true to its reliable format in a way that does not feel tired. Instead, the show provides a much-needed dose of slightly ridiculous, completely unrelatable, and genuinely fun escapist television.

The premiere opens with a dizzying drone shot introducing the show’s key players (as if audiences need a refresher) before launching into one of the Kardashian’s classic, over-the-top family parties which celebrates nothing in particular. Kourtney’s relationship with her new boyfriend Travis Barker is on full display at the party, with the couple engaging in heavy public displays of affection. The premiere’s heavy focus on this relationship (which fans know will eventually lead to an engagement) can feel uncomfortably gratuitous, but Kourtney’s giddiness makes it hard not to root for her.

Even casual devotees of the Kardashian universe may be wondering: What does Kourtney’s ex-boyfriend, Scott Disick, think about her new relationship? Luckily, the show quickly provides answers: One scene shows a conversation between Scott and Khloé where he claims to be happy for Kourtney while also complaining about being left out of the family barbeque. While Scott does readily admit to the ways in which he wronged Kourtney during their relationship, his complaints indicate a frustrating lack of self-awareness. But sometimes these feelings of bewilderment are what make the show so compelling.

Khloé’s relationship with NBA player Tristan Thompson is also on full display in this episode, with frank discussions about their romantic separation resulting from Thompson’s prior infidelity. The couple’s conversations about rebuilding trust remind viewers of one of the show’s unsolvable flaws: All the events that we see on screen took place several months prior to the episode’s air date. Because of this delay, viewers are already aware that Thompson admitted to fathering a son with his personal trainer Maralee Nichols while being in a relationship with Khloé. This knowledge imbues the pair’s optimistic discussions of the future with quite a tragic tone.

Fortunately, the show sticks to its strengths at the end of the episode by letting viewers in on some classic low-stakes drama. Kim is fearing that there is possibly an unreleased portion of her old sex tape about to be released (on Roblox of all places) and she recruits the whole family to save the day. Seeing how the Kardashians deal with their somewhat farcical everyday drama is what allows this franchise to endure the test of time, and this moment is nothing short of meme-worthy mastery. Will Kim be able to shut down this anonymous hacker before time runs out? Find out next week on “The Kardashians!”

And lastly: Is Kim really going to get away with dismissively referring to Debra Messing as “the girl from ‘Will and Grace’?”