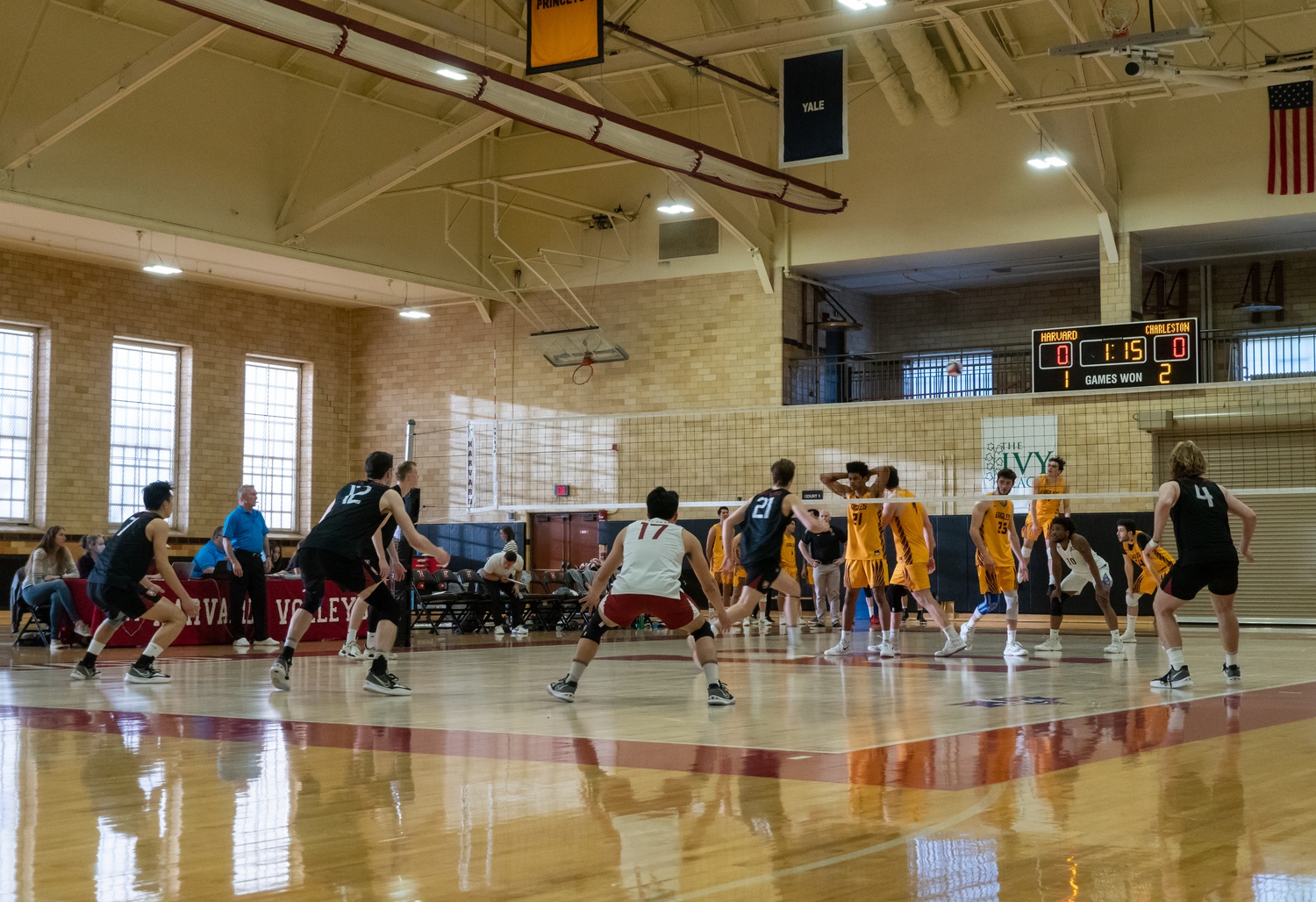 Seniors Eric Li, Campbell Schoenfeld, and Jason Shen guard the backcourt against an incoming serve in a match against Charleston. The trio provided kills, digs, and leadership consistently throughout the team’s successful season By Zadoc I. N. Gee
By Noah Jun

The Harvard men’s volleyball team fell to New Jersey Institute of Technology on Thursday at University Park, P.A., in the semifinals of the 2022 Eastern Intercollegiate Volleyball Association tournament. The match was the Crimson’s first trip to the playoffs since it won the tournament in 2018.

Harvard (12-13, 10-6 EIVA) entered the match as the No. 2 seed, having swept George Mason (13-14, 7-9) in a double-header the previous weekend. The team’s offensive and defensive performances crystallized in official recognition from the EIVA: both senior captain Jason Shen and sophomore middle blocker Ethan Smith were named EIVA Players of the Week. The Crimson received a bye in the quarterfinals and awaited the winner of the match between George Mason and NJIT. NJIT won that matchup, setting up a dramatic tiebreaker to the 1-1 split it had with Harvard across their two regular season games.

The hosts defended their courts, with Harvard prevailing 3-1 in Cambridge in February but falling to the Highlanders 3-0 during April’s showdown in Newark.

Senior outside hitter Eric Li saw the home-court advantage as a crucial factor to his team’s win against NJIT earlier in the season and something the team could not tap into on the neutral site in University Park.

“The familiarity with our home court and the environment there definitely gave us an advantage and allowed us to keep our momentum going,” Li said. “It was a little different from the match we played on Thursday… It felt more difficult to maintain that momentum throughout, which is something we would have liked to do better.”

Similar to February’s match, the Crimson got out to a fast start on Thursday, taking the opening set 25-17. Kills from senior outside hitter Campbell Schoenfeld and Li, who had 15 and 14 on the night, respectively, allowed the second seed to go on runs early in the set.

“In the first set we came out really hot,” Shen said. “We played really well, put NJIT back on their heels, and I was proud of that. That shows that our team was ready and was in the mindset, but we left the door a little open. In volleyball when you have a team on their heels like that, you just have to finish it. We kept the door open, let them back in, and they were a strong team and we weren’t able to fight back towards the end. We were still competitive and fought hard but couldn’t swing it our way.”

Thursday marked the end of Shen’s tenure as captain for Harvard, and in addition to his leadership he also provided 12 digs to defend his team from Highlander spikes.

Despite continuing its dominance with a strong 4-1 start to the second set, the Crimson soon fell to an eight-point NJIT run. Harvard managed to close the gap and level the score at 20-20 before being outscored 5-1 in the final six points of the set. The Highlanders managed to pull away toward the middle of the third, making its way to a 21-13 lead before closing it out 25-18 and coming within a one-set gap of a championship matchup with Princeton.

Li saw the service game as the reason for NJIT’s success.

“What really turned the tide was NJIT found their groove from the service line,” Li said. “They made it tough on our serve-receive to get good passes to our setter and to be in system. We had a good blocking match, and offensively we were good, too. I think the big difference was the swing at the service line. We were serving better in that first set, but as the match went on they began to serve better and put a lot more pressure on us.”

“The time we beat New Jersey earlier in the season, we absolutely shut down their hitters defensively through blocks and digs,” Shen said. “That’s what we did that first set. New Jersey’s a good team, they went back and adjusted, they started picking up kills, and we couldn’t respond in time. They adjusted really well, and we didn’t as much.”

The Crimson attempted a fourth set comeback to stop the bleeding. Schoenfeld provided kills at crucial moments, starting Harvard runs and stymieing NJIT runs. Smith, sophomore middle blocker Ethan McCrary, and first-year outside hitter Logan Shepherd also contributed to the team’s competitiveness. Although the Crimson managed to stay in the match and within a few points of the Highlanders, it could only save two match points before falling 25-22.

“The last set we pushed through,” Shen recalled. “We were down early and could’ve written that off, but we kept on fighting. No matter what the situation is, the competitive fire is there.”

Although the season is over, there were many bright spots in the team’s performance. The semifinal finish was Harvard's best in the past four years. The team’s youth also proved to be integral to the Crimson’s success; Li noted first-year setter James Bardin, who had 45 assists, four digs, and four blocks on Thursday, as a great addition to the team. Bardin has been a staple of the lineup throughout the whole year. Li also commended the contributions of Shepherd, who was inserted into the starting lineup later in the season.

“I'm proud of what the program has done this year after having basically a full year off and having to come together with a lineup consisting of some new players and some older guys and making it work,” Li said. "It gives me a lot of optimism for the direction of the program and the culture we’ve set.”

Harvard looks to build upon this season’s success next January with a talented class of new recruits as well as returners who now have a year of experience under their belts.