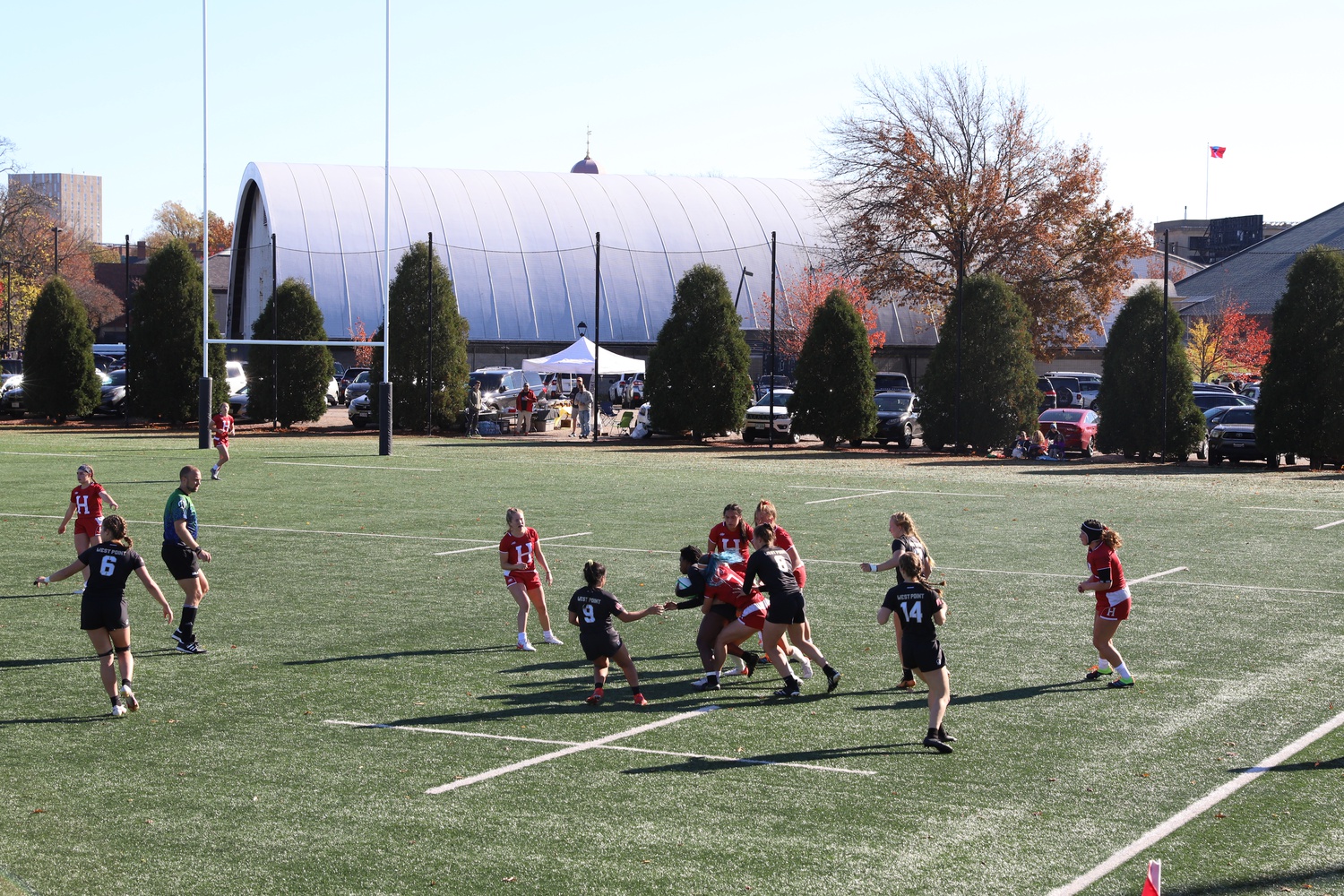 Harvard women's rugby competes in the NIRA national semifinals against Army in a 25-17 loss on Nov. 13, 2021. The 7s team exacted revenge on the Black Knights twice en route to a Crimson 7s title. By Mairead B. Baker
By Mimi S. Koenig, Crimson Staff Writer

The Harvard women's Rugby 7s team will look to defend its 2019 Ivy Tournament title this weekend, as it hosts Princeton, Brown and Dartmouth on Saturday. The Crimson will look to build upon its strong start to the season on April 2, where it won the Crimson 7s tournament in its first appearance since the 2019 season.

The Crimson went undefeated, beating West Chester (Penn.), 22-19, American International 43-0, and Army 17-15 in Pool B play before going on to defeat Sacred Heart 32-0 in the semifinal, and eventually Army again 25-17 for the championship. During pool play, the Crimson wasted no time, coming out hot with a score from senior center Sofie Fella only 45 seconds into its first game against West Chester. Fella went on to lead the team with 6 tries throughout the day. The Crimson would go on to win the contest 22-19, after strong performances from sophomore flyhalf Brogan Mior and first-year lock/center Jara Emtage-Cave, who scored once and twice, respectively. In its second game against American International, the Crimson never trailed in a dominant showing, which saw three scores from senior wing/scrumhalf Sabrina Kim, two from junior center/flyhalf Alex Pipkin, and one each from first-year flanker Sofia Hilger and sophomore flanker/number 8 Nafanua Malietoa Fitisemanu.

In its final game in the pool stage of play, the Crimson took on Army to decide the number one seed going into the knockout stage. The Black Knights, whose 15-woman squad defeated Harvard’s in the NIRA national semifinal on Nov. 13, were able to build a 15-0 lead going into the half, and were able to hold their lead going into the game's final five minutes. However, with the clock running down, Fella scored two consecutive triesto bring the score to 15-10 with a minute remaining. Then, on the game’s final drive, Mior was able to gain possession and tie the game at 15, setting up the eventual game-winning conversion for Pipkin, who completed the comeback and sent the Crimson into the semifinals as the number one seed.

After Dartmouth was defeated by Army, the Crimson took on Sacred Heart in the semifinal stage, and cruised to a 32-0 victory behind solid showings from Fella and scores from sophomore flanker/center Elianne Sacher and first-year scrumhalf Reese Morgan. In the weekend’s culminating final, a rematch with the Black Knights, the Crimson got out to its own 15-0 lead after scores from Fella and Emtage-Cave. Army would rally to draw within 3, but tries from Mior and Fitisemanu stretched the Crimson’s lead out to 25-12, and Harvard ultimately held on for a 25-17 victory. The triumph marked the first Crimson 7s tournament win in program history, after it finished second five consecutive times between 2015-19.

Looking forward, the Crimson now look to build on their momentum this Saturday at the Ivy 7s. Having won 10 of its last 11 contests dating back to 2019, the team is in prime position to continue its recent string of successes. As hosts for the tournament, it will also look to make it three Ivy 7s trophies in a row.

Harvard will not be the only team to enter the tournament in hot form, however; Brown 7’s, who the Crimson will face at 12:00 p.m., are also coming off a tournament victory. The Bears won their home Grizzly Cup on April 10. In the championship game of that tournament, Brown, led by Noelle Lewis, Mahdia Parker and Zy Thomas, raced out to a 26-0 halftime lead against Quinnipiac before holding on in the second half to claim a 26-21 victory.

Dartmouth, who went 4-1 at the Crimson 7s tournament in Pool A, with wins against Mount St. Mary’s and Sacred Heart, will look to improve upon its last performance in Cambridge. Katie Douty’s squad was paced by Abbey Savin, who scored 34 points during the tournament. Her performance was supplemented by a few rookies making their 7s debuts, as Allie Amerson, Kyla Widodo, Ella Gates and Adrienne Coleman scored throughout the competition.

Harvard will open play against Princeton at 9:20 a.m. at Mignone Field, and after the conclusion of three pool play games, the teams with the two best records in head-to-head matchups will advance to the championship game at 6:00 p.m. All games will be televised on ESPN+.

–Staff writer Mimi S. Koenig can be reached at miriam.koenig@thecrimson.com.