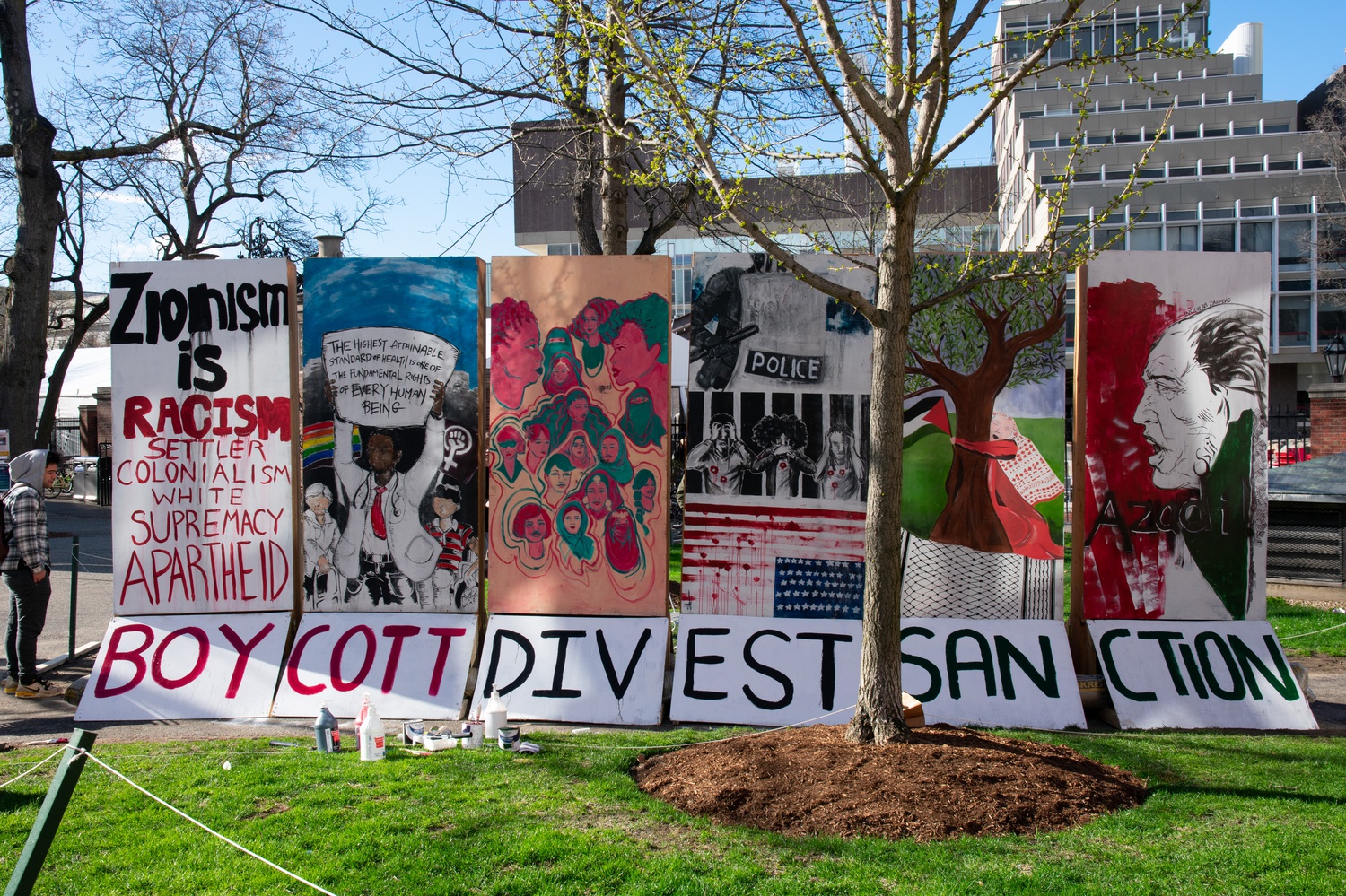 This year’s IAW programming featured speakers like Noam Chomsky, a theoretical linguist and political activist, and Norman Finkelstein, a political scientist and author.

The College’s Palestine Solidarity Committee is a student group “dedicated to supporting the Palestinian struggle for self-determination, justice, and equality through raising awareness, advocacy, and non-violent resistance,” per its website.

IAW organizer Michael A. Miccioli said the purpose of the week is to “draw attention to the conditions which Palestinians have to live under in both Israel and the occupied territories.”

“Israel is practicing the crime of apartheid, so our goal is to draw attention to those conditions, to try and advocate, of course, that Israel follow international law and afford equal rights to all people regardless of their race or their religion, and to try and build solidarity and awareness in the general Harvard population,” he said.

The week kicked off with a panel on Black Palestinian Solidarity, which featured columnist Margaret Kimberley and Hella Black Podcast co-host Abbas Muntaqim. Chomsky headlined another event Wednesday, which had more than 60 virtual attendees, in addition to an in-person crowd in Harvard Hall.

The panelists discussed the concept of “pinkwashing,” which Atshan defined as “a propaganda discourse that supporters of the right-wing Israeli state use to draw attention to a purported advanced LGBTQ rights record in Israel in order to detract attention away from Israel’s violations of Palestinian human rights.”

“We know homophobia exists everywhere. It exists in Palestine. It exists in Israel,” Murad said. “It exists all over the world, but it doesn’t justify any of the oppression that Palestinians are going through.”

Earlier in the week, the PSC placed an art installation between the freshman dorms of Canaday and Thayer meant to represent the Israeli West Bank barrier. The “Wall of Resistance” consists of six painted panels, which included the phrases “Free Palestine” and “Boycott! Divest! Sanctions!” referring to the international movement to withhold economic support from Israel.

The installation features a quote from writer and civil rights activist Audre Lorde, “Your silence will not protect you.” Another panel reads in all capital letters, “Zionism is Racism Settler Colonialism White Supremacy Apartheid.”

In response to IAW, Harvard Hillel organized a “Stand with Israel Rally” on Wednesday calling on Harvard affiliates and the public to “take a stand against the anti-Israel apartheid week.” Roughly 40 people gathered in Harvard Yard in support.

Hillel’s student president, Natalie L. Kahn ’23, said in an interview at the rally that she felt IAW’s approach lacked nuance and that the art installation was offensive to students.

“For our students to have to walk outside their room everyday and see these very reductive and libelous statements that are calling Zionism racism and Zionism apartheid and Zionism white supremacy — which is something deeply, deeply offensive to the Jewish people who, by the way, had been targeted by white supremacists throughout years — is disgusting,” said Kahn, a Crimson news editor. 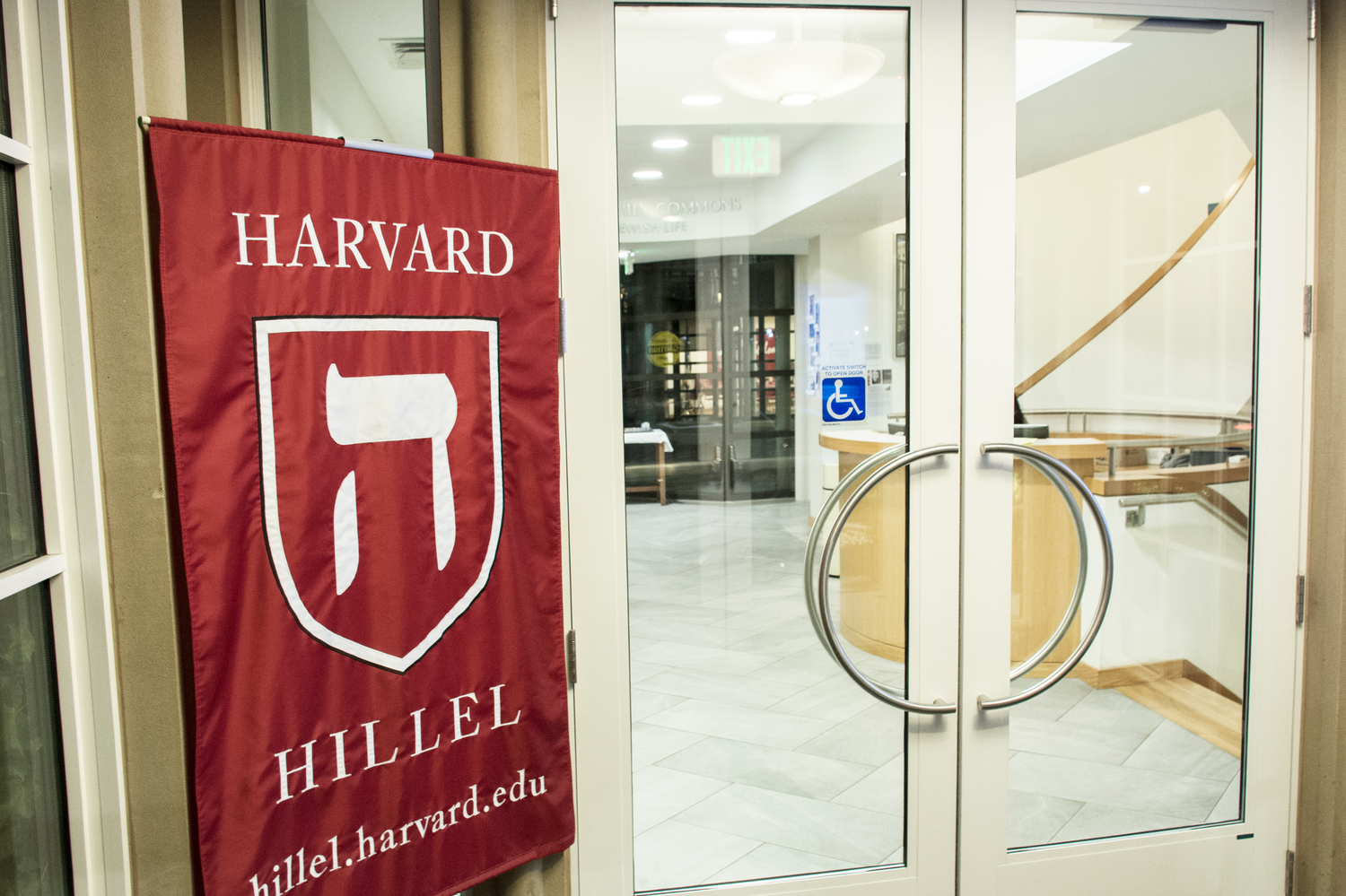 Harvard Hillel, a center for Jewish life on campus, is located on Mt. Auburn St. in Cambridge. By Owen A. Berger

He also condemned the art installation as one that “can be explained only in terms of a frothing vitriol that verges left and right on outright antisemitism.”

The Harvard Israel Initiative, a Hillel program, called the IAW events “devoid of any attempt at dialogue or complexity” in a Tuesday statement. Hillel’s Student Board also released a statement criticizing IAW’s language.

IAW organizer Nadine S. Bahour ’22 said that she always “expects” opposition and hopes the events will start a conversation.

“I love how Harvard is a space on campus where everyone can organize their events and also feel comfortable speaking up about what they object to with other student organization events,” Bahour said.

Miccioli pushed back on the claim that calling Israel an apartheid state is anti-semitic.

“They’re trying to conflate criticism of the state of Israel with anti-semitism. We have Jewish members in our organization. We had Jewish speakers come speak at our events, so I don’t think that their response has been very convincing,” he said.

Bahour said that her favorite part of IAW’s programming has been the Wall of Resistance in Harvard Yard.

“The panels are all very powerful and they really show a lot of solidarity, because they're not all about Palestine,” Bahour said. “Each one covers a different topic and is trying to show that the Palestinian cause doesn't exist in a bubble, but it's rather very interconnected with our everyday life here in the U.S.”