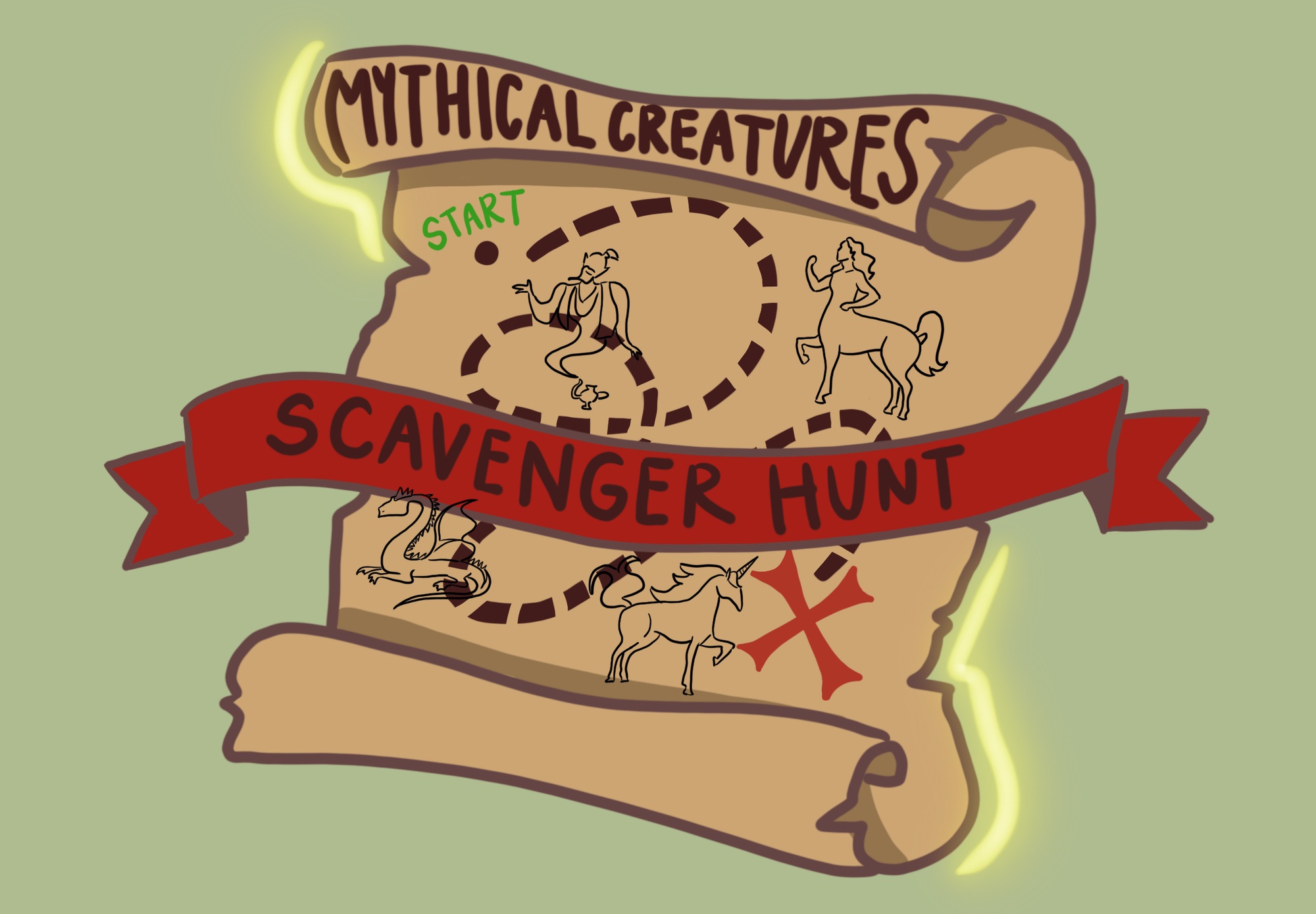 The Mythical Creatures Scavenger Hunt runs from April 15 to May 30 throughout the Harvard Museums of Science and Culture’s four locations. Visitors participating in the self-directed experience follow a provided guide that directs them to specific artifacts. On the third floor of the natural history museum, for example, eagle-eyed participants can find a tapestry of a colorful bird resembling the ancient Greek phoenix. Other creatures on display include a cyclops, mermaid, genie, and centaur.
By June K. Fergus

My mother dragged me to my fair share of museums as a child, so in college, I decided to even the scales by avoiding them at all costs. That is, until I was assigned to cover the Mythical Creatures Scavenger Hunt at the Harvard Museum of Natural History — an adventure that tasks visitors with identifying fossils, artifacts, and replicas that resemble famous fantasy figures.

The Mythical Creatures Scavenger Hunt runs from April 15 to May 30 throughout the Harvard Museums of Science and Culture’s four locations. Visitors participating in the self-directed experience follow a provided guide that directs them to specific artifacts. On the third floor of the Peabody Museum, for example, eagle-eyed participants can find a tapestry of a colorful bird resembling the ancient Greek phoenix. Other creatures on display include a cyclops, mermaid, genie, and centaur.

As I walked through the museum’s brick entrance, my first priority was to locate my fellow scavengers. I knew I was in the right place when I saw a pre-schooler in the lobby holding a crisp manila worksheet emblazoned with gothic font.

“I’m here for the scavenger hunt,” I told the man at the front desk. He raised his eyebrows. I figured it was either because he didn’t expect the program to draw many visitors at 11 a.m. on a Friday, or because I was an eighteen-year-old about to embark on a quest for mythical creatures.

In any case, I set off to track down my first target, a cyclops lurking on the third floor. After I made my way through the “Painting the Deep.” exhibit — a hallway of sea creature paintings with lighting reminiscent of a nightclub — I arrived at the Cenozoic mammals room. While I was unable to identify any one-eyed monsters, I did find a giant turtle shell and a stressed child in a graphic tee. “I just need to find the cyclops!” she moaned as she paced back and forth between ancient fossils.

Other participants were similarly engaged with their craft. As I ventured into a dim room filled with glass flowers, I chatted with nine-year-old Anya. “I really like learning about new animals and plants in nature,” Anya told me as she searched for an ancient, carnivorous flower that likely inspired the Super Mario franchise’s mythical Piranha Plant. Her mother added that the scavenger hunt clues had guided the duo to several wings of the museum that they had never before explored.

This is precisely why Wendy Derjue-Holzer, the education director of the Harvard Museum of Natural History, is excited about the program. She writes in an email that she hopes the adventure exposes visitors to new parts of Harvard’s museums and allows participants to “think about the origins of various myths, stories, and legends,” through a medium that is both “fun and playful.”

Arielle Ascrizzi Moon, an educator at the museum, says that the theme of the scavenger hunt fits neatly with artifacts already on display. Plus, museum-goers tend to respond positively to interactive programming. “We have done similar cross-museum hunts in the past and our visitors really enjoyed them,” Moon writes. “We have seen families and even adults using it to explore!”

From what I observed, the scavenger hunt drew particularly eager engagement among siblings. For example, as I stood in a somewhat disturbing room of taxidermied animals, I watched a child below the age of scavenger hunt comprehension trail her older brother in search of the Chupacabra, a mythical dog-like creature said to drink the blood of animals.

Unfortunately for both my enjoyment of the activity and my public image, my 12-year-old sister was not present to help me locate mythical creatures. After several failed attempts to navigate from Great Mammal Hall to the Arthropods wing, I called it quits on my scavenging career. Amid my retirement, I ran into a few of my interviewees, many of whom could not empathize with my deep confusion at the layout of the museum. Five-year-old Ari, for example, had already managed to find both the cyclops and the merfolk.

Defeated yet inspired, I made my way back to the lobby. As I exited the museum, I saw a family approaching the front desk. “Wow! A scavenger hunt!” one of the children exclaimed, as he set off with his brother to explore the mythical creatures hiding throughout the halls of the Harvard Museum of Natural History.

A previous version of this article incorrectly stated an exhibit located in the Mythical Creatures Scavenger Hunt was called the “Illuminating the Deep Sea.” In fact, it was called “Painting the Deep.”

A previous version of this article incorrectly stated Wendy Derjue-Holzer’s title. She is the education director of the Harvard Museum of Natural History.