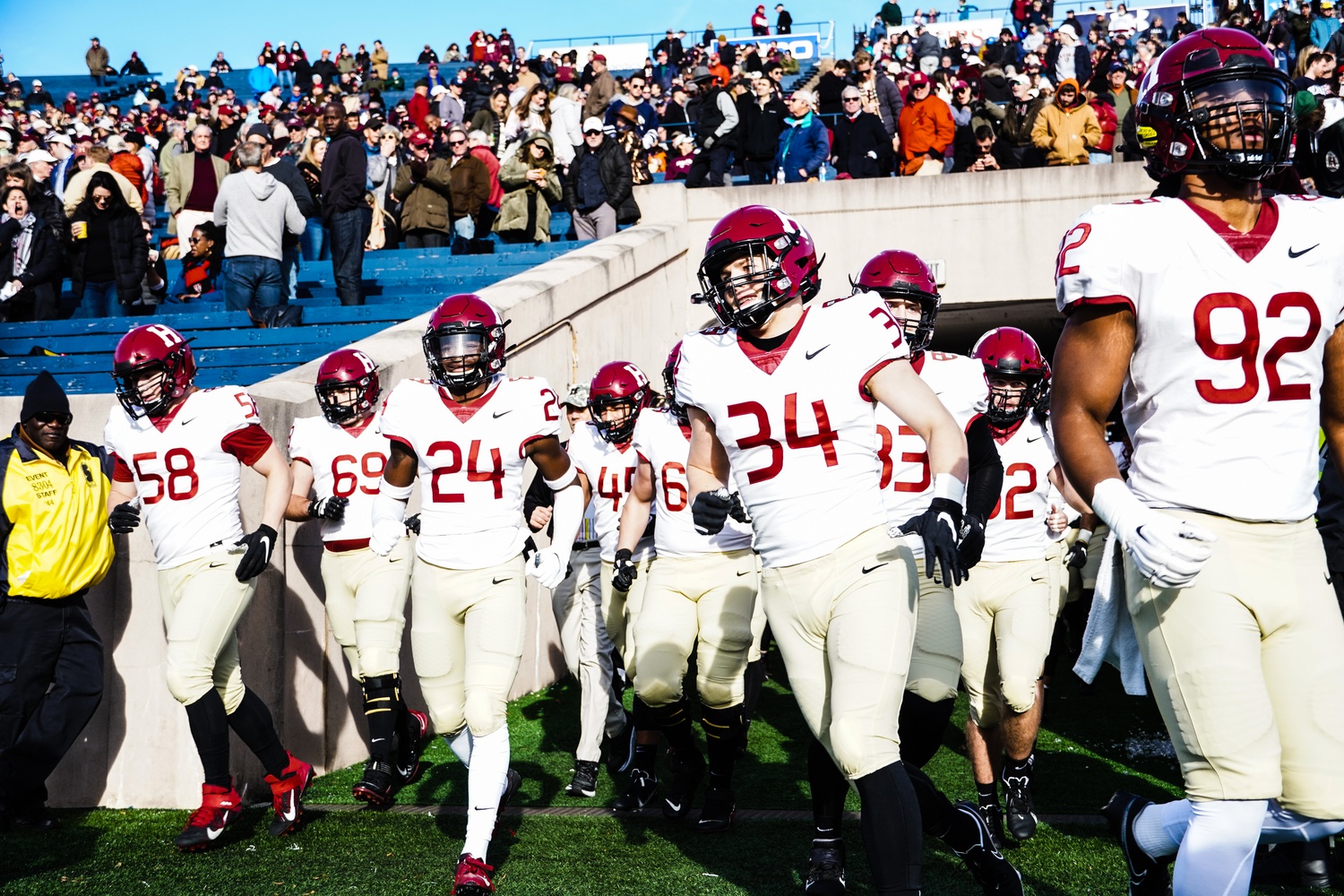 Junior linebacker Matt Cavanagh (34) runs onto the field with the Crimson before the Nov. 20, 2021 clash against Yale, which Harvard won, 34-31. Cavanagh, the Edina, Minn., native, was the only Minnesotan on Harvard's 2021 roster. By Josie W. Chen
By Sydney Farnham and Griffin Wong, Crimson Staff Writers

In its storied history, Harvard has played 1,342 football games, winning roughly 68 percent of the time it takes the field. Of all of its opponents, it has lined up against Yale the most times, facing the Bulldogs 137 times in the rivalry known as The Game. But, starting in 2023, it will add a new opponent to its ledger; the team announced via its Instagram account on April 12 that it will play a home-and-home series against the University of St. Thomas, beginning with a clash at Harvard Stadium on Sept. 16, 2023, and ending at O’Shaughnessy Stadium in St. Paul, Minn., on Sept. 15, 2029.

Although few teams have a history as long as the Crimson’s, the Tommies first competed in 1904 and have also taken the field more than 1,000 times. St. Thomas was one of the inaugural members of the Minnesota Intercollegiate Athletic Conference in 1920 and, since then, has won twenty MIAC championships, including seven in its last ten seasons. It achieved its pinnacle of success in 2012, when it finished as the national runner-up in Division III, repeating its feat in 2015. The Tommies have produced quite a few notable alumni, including Seattle Seahawks general manager John Schneider and Vince Lombardi Jr, the eldest son of the late NFL legend. Head Coach Glenn Caruso took the reins at St. Thomas in 2008, and has since been named National Coach of the Year six times at the Division III level. After winning 35 out of its 36 home games between 2014 and 2019, it joined Division I prior to the 2021 season.

After making the leap to the top flight, St. Thomas found success in its first season at the Football Championship Series (FCS) level. Last year, it claimed a 12-9 victory at Michigan Tech in its first top-level game on Sept. 11. Overall, it finished 7-3, with its 6-2 record within the Pioneer League good enough to tie for third in the conference. The Tommies won on the strength of their defense, which allowed opponents to score just 17.80 points per game in 2021, 0.40 points more than Princeton’s 12th-ranked unit.

“They went right into the Pioneer Conference and played at a very high level,” said Harvard head coach Tim Murphy on his initial impressions of St. Thomas. “[They] were in virtually every single game, and they’re a big, strong, physical team. They’ve got a lot of typical or stereotypical big, strong offensive and defensive linemen.”

The series will benefit both teams. For the Tommies, playing the Crimson allows them to prove that they can compete with top FCS programs after they lost, 44-3, to their lone ranked opponent, No. 15 Northern Iowa, in 2021. It will give St. Thomas exposure to competition in the Ivy League, a defensive-oriented conference that saw three schools – Harvard, Princeton, and Dartmouth – enjoy national top-25 rankings for portions of last season.

“The opportunity of having both home and away contests with the Crimson allows us to highlight two programs that take both education and football very seriously at the FCS level,” said Caruso in a story posted to the St. Thomas Athletic Department’s website.

The series also marks a drastic shift for Harvard. In Murphy’s 27-year stint at the helm of the Crimson, which has seen him become the winningest coach in conference history, he has never coached a game in the Midwest. In fact, when the Crimson travels to St. Paul in 2029, it will be the first time it has played in the region since a 14-12 loss to Michigan on Nov. 9, 1929. Murphy is hopeful that through the series, the Crimson will be able to strengthen its recruiting efforts in the Midwest after it rostered just one Minnesotan, junior linebacker Matt Cavanagh, in 2021.

The game will serve as the season opener for Harvard in both 2023 and 2029, with the Ivy League’s conference schedule slated for the latter half of the season. All time, the Crimson is 120-25-2 in its season openers, including 19-8 under Murphy. Meanwhile, since the Pioneer League starts play earlier in the year, the Tommies will be playing their third game of the campaign. As part of the comprehensive 10-year deal struck by ESPN and the Ivy League in 2018, the 2023 contest will be broadcast on ESPN+.