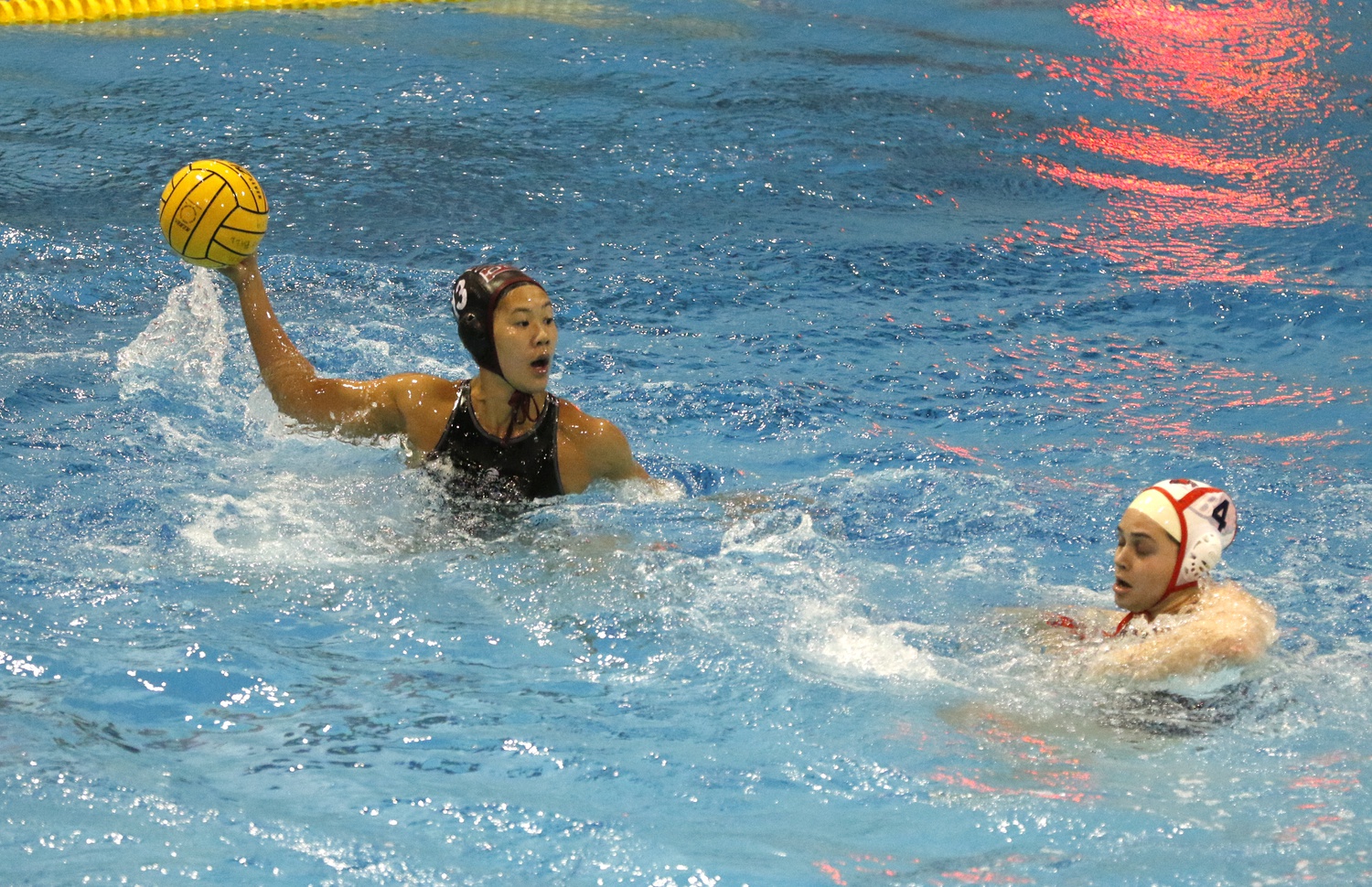 Then-senior forward Kristin Chen '19 looks to push the action in a back-and-forth thriller against Bucknell on March 3, 2019. Harvard, ranked No. 15 at the time, bested Bucknell 8-6 at Blodgett Pool. By Timothy R. O'Meara
By Danai-Christina Avdela, Contributing Writer

The Harvard women’s water polo team saw its longest series of the season this past weekend, with the Crimson taking on Bucknell and St. Francis, achieving a key victory over No. 21 Princeton, and keeping up with No. 7 Michigan, who is undefeated in conference play.

“It was our last home weekend,” said junior defender Jaiden Miller. “Celebrating our seniors and being able to pull out those wins in front of all our friends and with our seniors was amazing. I think it gives us good momentum going into Brown this weekend and then conference championships next weekend.”

Meeting exactly one week after Harvard secured a victory over Princeton (18-8, 7-3 CWPA), the Tigers came out firing with a pair of goals within the first two minutes of the match. Nevertheless, the Crimson took a 5-4 going into the break. Throughout the entire match, no team gained more than a two-point lead over the other. Harvard was ahead by one goal in the last five minutes, but Princeton sent the game to overtime with a bar down shot in the last seconds of regulation.

The Crimson managed to pull ahead to 11-10 during the last 90 seconds of the second overtime, but the Tigers took it to sudden death with 6 seconds remaining. Within less than 20 seconds into this final period, senior center defender Inde Halligan scored a perfect lob shot, securing another Harvard victory against Princeton.

In the second game of the day against Bucknell (9-14, 3-8 CWPA), the Crimson fell behind 4-2 at the end of the first half, before turning it around to win the match 7-5 and complete its second comeback of the weekend.

Harvard had a tall order to win all four of its matches on the weekend, as Michigan (23-8, 11-0 CWPA) had been undefeated in the CWPA since 2018. The Crimson was able to keep the score differential to two points until the last six minutes, when Michigan took control of the match and scored four successive goals.

“Michigan is a very beautiful team,” Miller reflected. “They've been number one in our conference, I think for seven years in a row now. They have an attitude to themselves that they're untouchable. I think our mindset going into that match [was] we were hungry, and we wanted to prove that we're right there, that we're not someone you can shove over, and we're going to give them a run for their money for the conference championships this year.”

Both Miller and Hourigan pointed out the contribution of junior goalkeeper Zoe Banks to the mentality of the team.

“[Banks] is a brick wall of a goalie,” Miller said. “If things aren't going right, you could look at her, and she calms you down and also hypes you up at the same time.”

Miller and Hourigan also stressed the ability of the team to make changes and play full lines, as evidenced by the fact that the team has had games in which six or seven different players score: a difficult feat in collegiate water polo.

Harvard, now equipped with key victories and a competitive game against Michigan, looks forward to the CWPA championships this upcoming Friday, April 22.