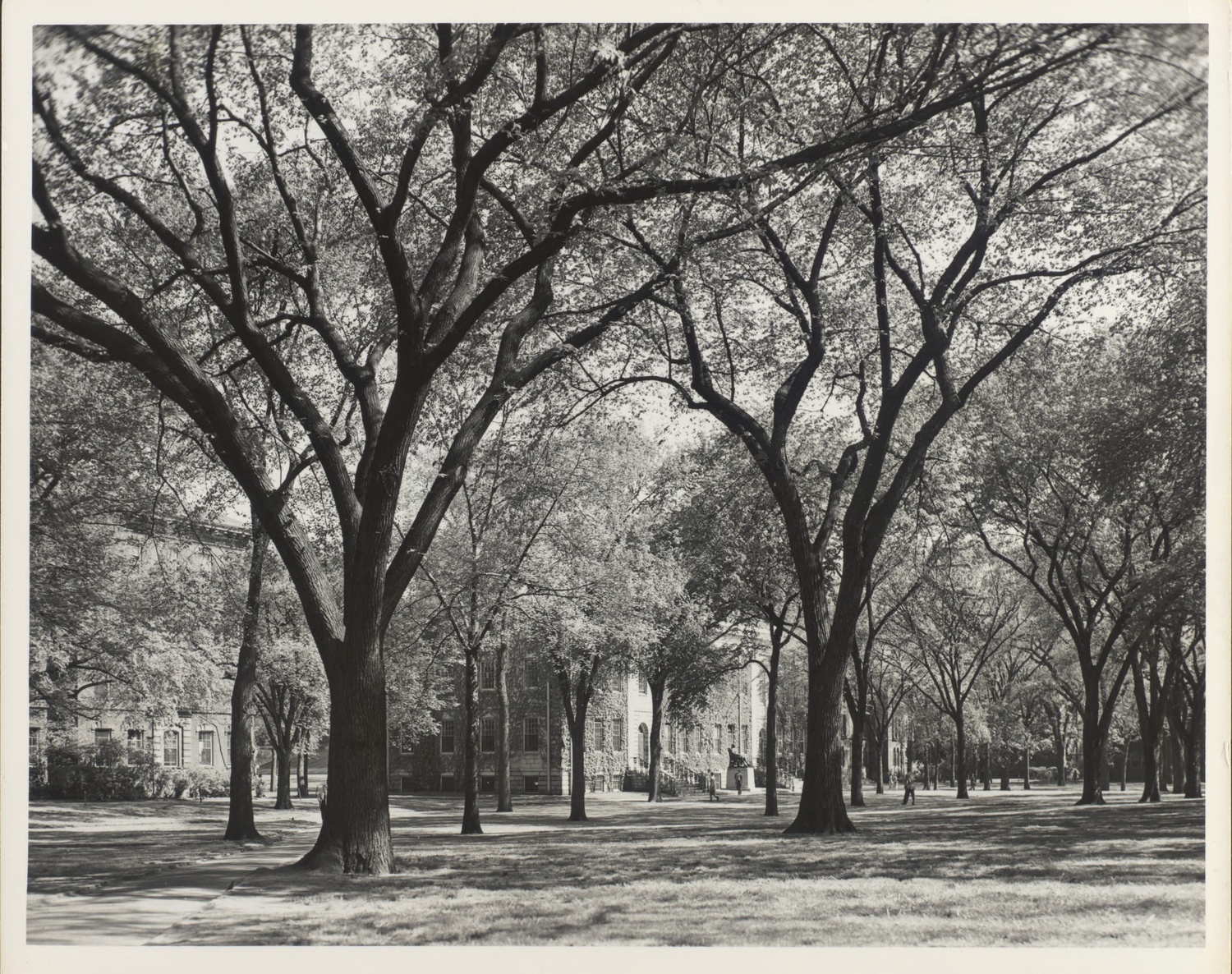 English professor Byron S. Hurlbut, Class of 1887, certainly enjoyed Harvard Yard’s landscape. In the October 1901 issue of the Harvard Monthly, Hurlbut wrote that he always looked forward to “the first faint flecks of green that sway among the branches of the elms” in the springtime. In his view, four years was not enough to experience the “long, penciled rays of sunshine slant across lawns” in the summer and “the yellow and brown of the October elms” and the “flaming of the ivy” in the fall.

In 2022, though, we cannot experience the October elms’ yellow hue or the ivy’s crimson color: there are few elms and little ivy remaining today.

Indeed, over the 20th century, both plants came under threat from different sources. Natural pests have plagued Harvard’s elms, while University administrators — more concerned with practicality than aesthetics — launched a plan to remove ivy from Harvard’s hallowed halls.

The University planted elms in the early 19th century as part of an effort to beautify campus and provide shade. Meanwhile, ivy’s arrival in Harvard Yard is something of a mystery. The Harvard Gazette speculated that Charles Eliot Jr., a landscape architect whose father served as president of Harvard, planted ivy during a landscape renovation in the 1890s. By 1900, ivy had become widespread on campus.

In the first decade of the 1900s, non-native elm-leaf beetles, bark borers, and leopard moths began to attack Harvard Yard’s elms. As City of Boston entomologist James W. Chapman summed up in 1910, Harvard squirrels had driven birds away from the yard by destroying their nests. “Here is a conflict of sentiments, trees vs. squirrels. And the result is, many squirrels, few birds. Few birds, many insects. Many insects, few trees,” Chapman wrote pithily. He hoped the University could stave off the most serious problems, though.

But by the next year, the Harvard Bulletin rued that the pests had left the Class Day Tree near Holden Chapel a shriveled hulk. The tree, which served as the center of festivities preceding Commencement, waited in “ghostly outline” to be chopped down.

Over the next few years, Harvard alumni transplanted elms from nearby parks in Cambridge and Boston to replace the dying trees with the help of landscape architecture firm Olmsted Brothers, founded by two sons of Central Park designer Frederick Law Olmsted. To mark a successful 1912 transplant, the poet Percy Mackaye, class of 1897, published a dedication in the Boston Evening Transcript: “Your branches die, but not the dreams they bred. / They, like immortal choirs of dawn, displace / Your silent ruin with the singing dead.”

Despite those efforts, a new pestilence would soon arrive. Dutch elm disease — which kills trees by restricting water flow throughout their vascular system — reached Cleveland, Ohio, in 1930 via a shipment of infected logs from France, and it soon spread rapidly throughout the United States. However, Dutch elm disease did not reach Harvard until the early 1970s.

In 1974, Harvard took stock of its Dutch elm disease problem, blaming it on the prohibition of DDT and vehicle pollution from Massachusetts Avenue. With promising research in the works, though, landscape designers hoped they could plant elms in the yard once again.

Unfortunately, the research on making trees resistant to Dutch elm disease did not pan out. Olmsted Brothers had planted elms too close together in Harvard Yard, so the fungus spread too quickly between trees. In the 1990s, the problem had grown to such scales that the University put together a committee to discuss the problem. Eventually, the committee commissioned landscape architect and Graduate School of Design professor Michael R. Van Valkenburgh to design a new master plan for the Yard — without elms.

Van Valkenburgh and tree consultant Peter Del Tredici set out to “recreate a canopy reminiscent of the character of the American elms — to retain not only their memorable quality but also unimpeded views across the Yard,” as they wrote in an 1994 article in the Arnold Arboretum’s Arnoldia magazine.

The pair planted 13 different canopy tree species and 11 peripheral tree species to reduce reliance on the elm monoculture and to adapt to individual microclimates in the yard. Planting finished in 1994, and critics largely acclaimed the project not only for its diversity but also for its design. As Landscape Architecture magazine commented, “By emphasizing the canopy of deciduous trees as a lid and the continuity of the ground plane as a floor, Van Valkenburgh has boxed the yard’s rich but diverse range of time-specific buildings inside a timeless — and orderly — landscape.” 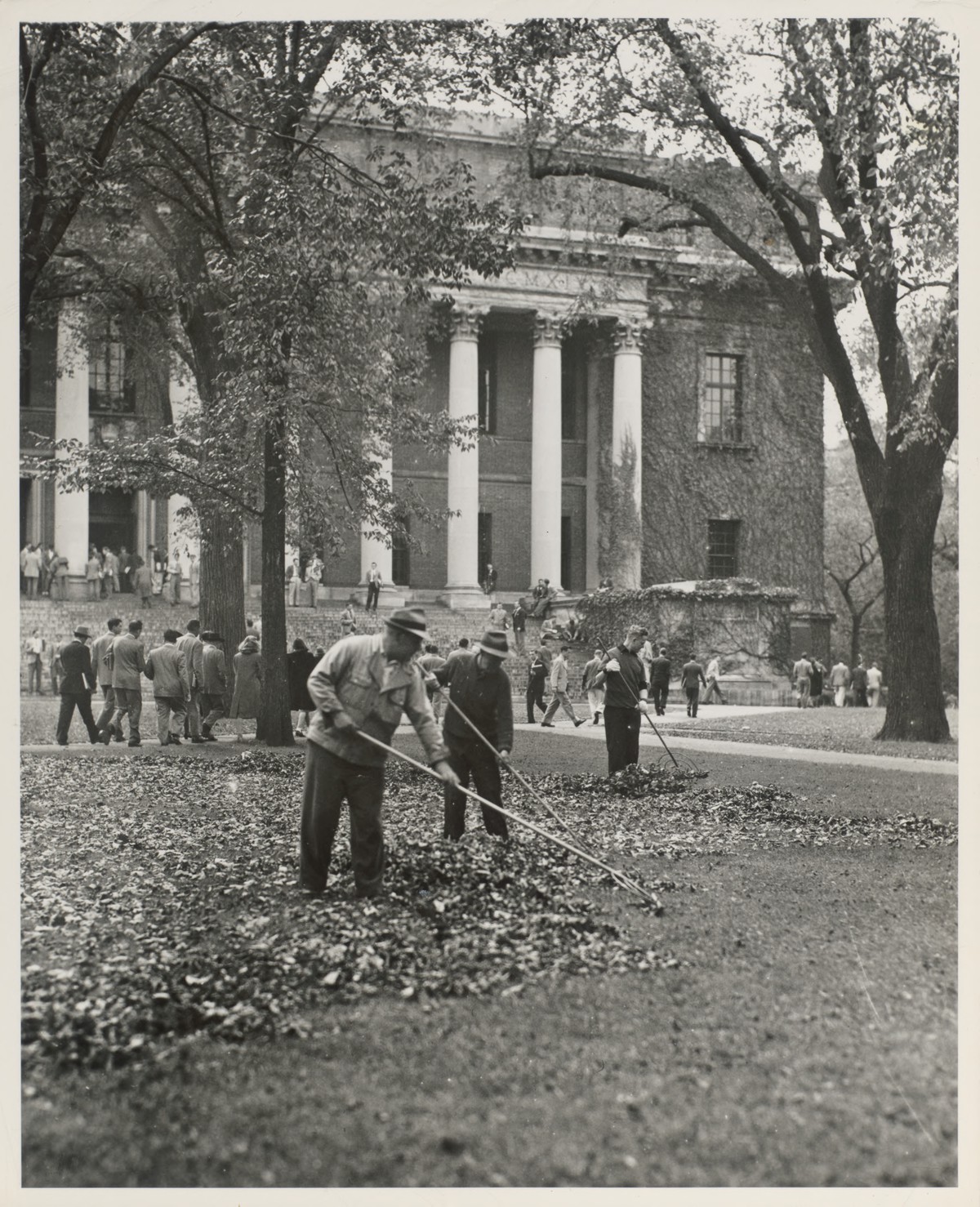 Meanwhile, as Harvard dealt with its Dutch elm disease problems, Harvard landscapers were removing ivy from the Yard because the plant’s tendrils had started to cause too much damage to buildings.

In 1982, Harvard announced a methodical plan to cut down every single ivy vine on campus as part of a building renovation project. Students quipped that they would have to “nip it in the bud,” and alumni grumbled about the lost ivy’s aesthetic value, forming the “Save Harvard’s Ivy Today” group.

Eventually, administrators yielded to their demands. But it was only a temporary reprieve. With Harvard’s latest house renewal starting in 2008, administrators finally committed to removing the last vestiges of ivy.

And so Harvard is now an Ivy League campus sans ivy.

In the end, although Harvard’s elms and ivy no longer grace today’s Harvard Yard, Hurlbut’s paean to Harvard’s landscape still holds true as springtime descends on campus for the last time in my undergraduate career. While Hurlbut thought a full four years on campus would not be enough to fully experience Harvard’s natural beauty, my two and a half years here have been far too short.