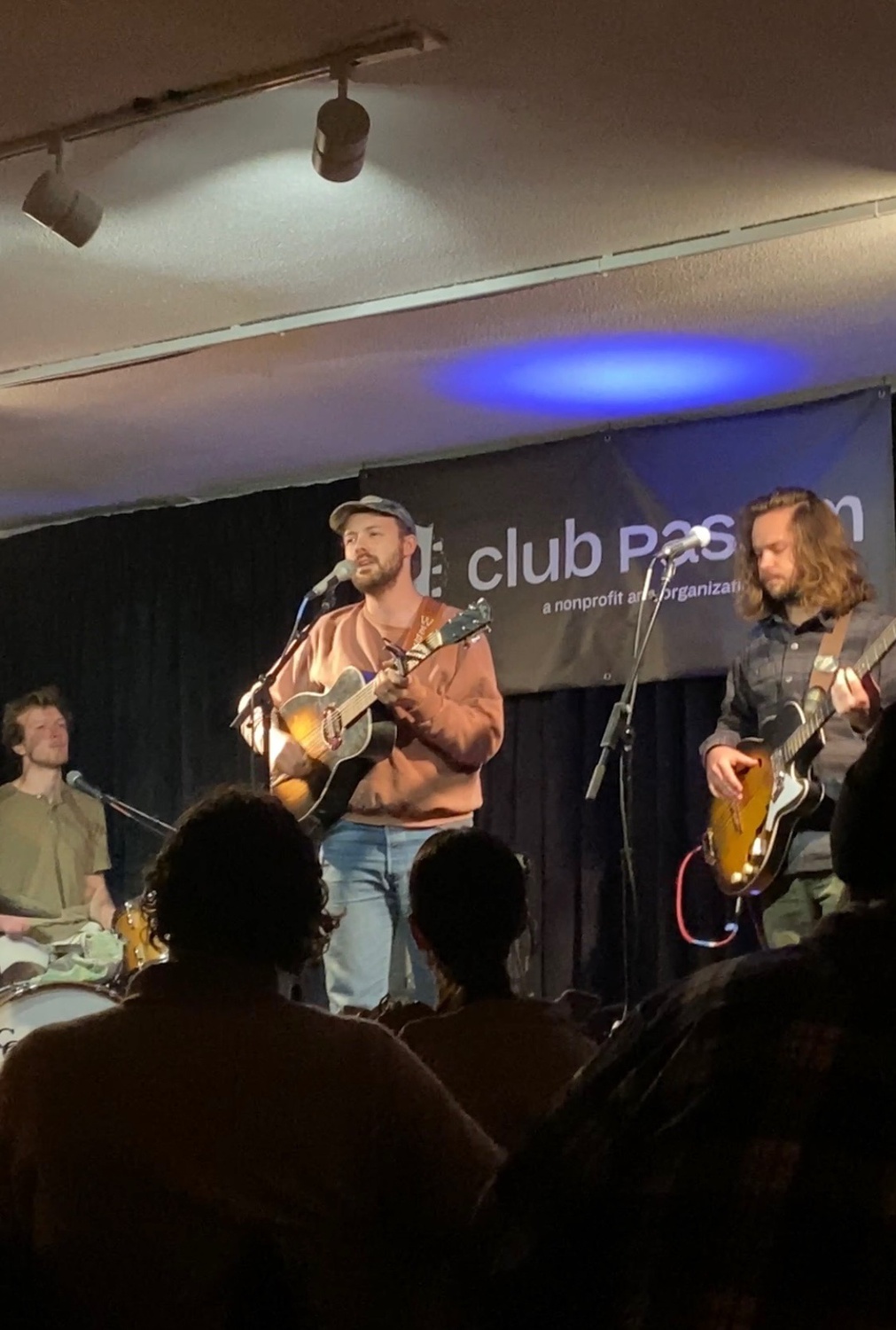 On a stage mere feet from tables of hungry diners and eager listeners, Sam Weber performed at Club Passim on March 27. Featuring songs from his recently released album “Get Free” alongside older works, Weber’s performance was an intimate and multidimensional glance into the artist’s life.

Rows of candles adorned the walls and tables of Club Passim while guests were served food and drinks for the show. The soft lighting and energetic chatter created an inviting atmosphere, full of excitement for Weber and his opening act, The Ladles.

The Ladles — an acoustic folk pop band composed of Kate Martucci, Lucia Pontoniere, and Caroline Kuhn — first met at the New England Conservatory of Music in Boston. Now, six years later, this concert rekindled the nostalgia of performing in the same city where their career began. Performing several songs off their latest album “Springville Sessions,” The Ladles melodically recounted friendship breakups in “The Friends You Had” and navigated struggling with anxiety and being present with others in “Sunset Pink.” Uniting banjo instrumentals with soulful lyrics, the trio set the stage for Sam Weber’s musical storytelling.

Opening with “Everything Comes True” from his 2019 album of the same name, Weber dove into the deep end of trials and tribulations encountered throughout life, from teenage rebellion to illness and relationship troubles. Weary but ending on a hopeful note, “Everything Comes True” showed off his soft vocals and narrative lyrics.

Joined by Danny Austin-Manning on the drums and Tejas Leier Heyden on the guitar, Weber went on to play “Truth or Lie,” a tranquil but powerful declaration that honesty will prevail and “it all comes to light, over time.” Referencing struggles in Weber’s life through phrases like “wading through the bullshit really is the hardest thing,” the singer emphasizes his choice to redirect his pain into songwriting.

Drawing on his own experiences adds depth to Weber’s lyrics and builds an intimate relationship with his audience. Though the themes of his music are by no means novel, the serene but emotional way with which Weber delivers his ruminations on familiar topics allows for open connection between him and his listeners.

“Get out of the Game” — a song about returning to your roots and going back to what you love at a new point in your life — was a highlight of the show. Intertwining descriptions of picturesque landscapes with bluegrass instrumentals and varying tempos, Weber tells an engaging tale of his own artistic journey. “Get out of the Game” resonates with anyone who’s ever felt unsure about their path and had a chance to rediscover what it is they truly want to do for themselves.

Sharing The Ladles’ sentimentality about being in Boston, Weber invited the opening band to join him on stage towards the end of his set. Trading in their banjo and violin to perform as Weber’s backup singers, the trio added impressive vocal range to the songs “Obligated” and “Here’s to the Future.” Sharing a similar folk core in their music, The Ladles sounded right at home performing with Weber and energetically concluded the show.

Circling back to the frustration and obstacles encountered throughout life in “Everything Comes True,” Weber’s finale “Burnout” contemplates the age-old struggle between unapologetically chasing a creative vision and catering to an external audience with the goal of financial security. With existential lyrics like “Everything you love will one day slowly decompose into nothing,” Weber makes this a universal issue and accepts his fate with the lyrics, “Won’t you burn out with me?”

Weber’s performance at Club Passim was an inside look into the world of making art and all of the ups and downs that come with it. Capturing the dynamic unpredictability of life, Weber’s mellow vocals and descriptive lyrics create a tranquil respite to acknowledge and give voice to the strife listeners face — making the performance a memorable and relatable one for his listeners.