‘Pops and the Island of Misfit Professors’ Review: An Exhilarating Musical Adventure 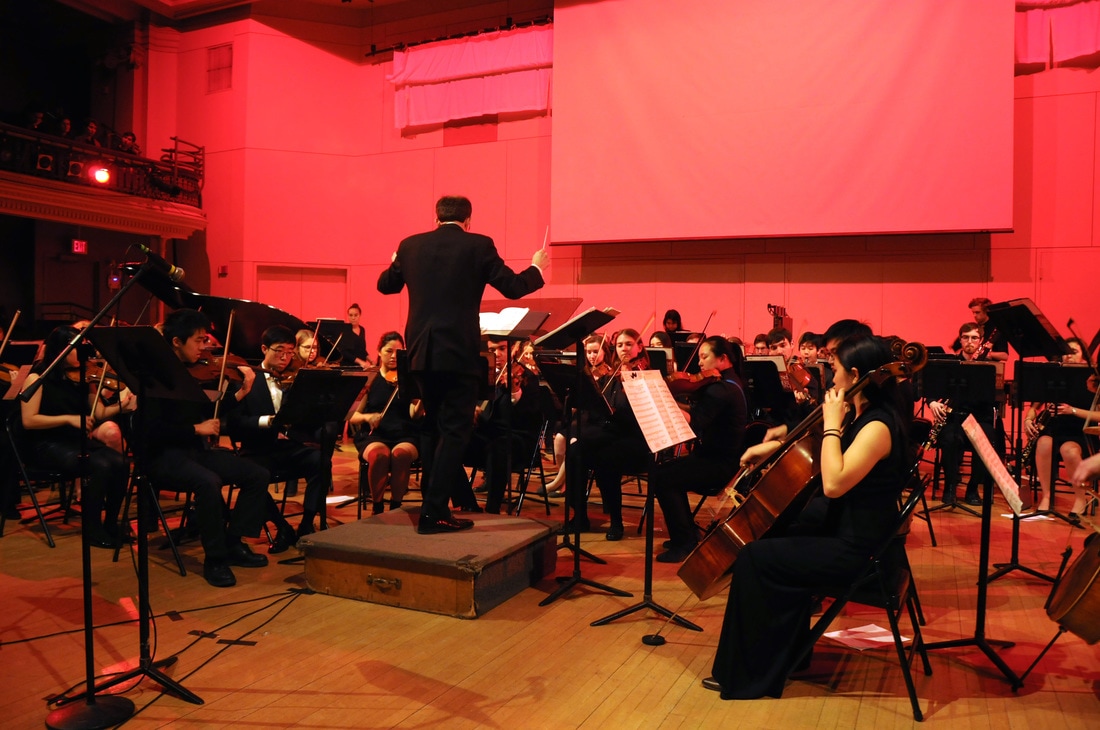 The Harvard Pops Orchestra performing in the Lowell Lecture Hall during the 2017 spring semester. By Courtesy of Jackie Chea
By Larissa G. Barth, Contributing Writer

Complete with music from composers ranging from Mendelssohn to John Williams, quips about the Undergraduate Council, a turkey attack, and a heartwarming tale of three professors navigating the dangerous waters of academia, the Harvard Pops Orchestra’s spring concert “Pops and the Island of Misfit Professors” offered much entertainment for those in attendance.

Harvard Pops Orchestra is a symphonic orchestra fusing a variety of music, including student-written pieces, with singing, acting, and filmmaking. Held in Lowell Lecture Hall on April 2, this spring’s concert had three Harvard professors on a quest for tenure travel to a mysterious island where they encounter feisty animals, evil Colleagues, and a magical artifact. Harvard Pops Orchestra’s unique concept, according to co-president Skye G. Park ‘24, is “theatrical music.”

“We don’t refer to our concerts as ‘concerts,’ we call them ‘shows’ because though it is focused on the orchestra and the music that we choose, we also have a script and actors running alongside the orchestra throughout the show,” said Park.

In addition to acting and a setlist that includes movie soundtracks, classical pieces, musical theater, and funk rock, Pops shines in its comedic timing. “I appreciate the jokes a lot, and that it’s not just straight songs,” said audience member Margaret L. Woo ‘25 of “The Island of Misfit Professors.”

The show’s plot focused on three professors, acted and sung by Nikita Nair ‘24, Jacob K. Ostfeld ‘23, and Kyra S. Siegel ‘25, who must make a “wicked awesome discovery” to get tenure at Harvard. After concluding in Disney’s “How Far I’ll Go” that they would rather choose a dangerous adventure over the alternative consulting career, the trio takes a rowboat to the Island of Misfit Professors while the orchestra accompanies them with the majestic “Raiders March” from Indiana Jones.

“The island,” Park said, “is an idealized, perfect utopia of academia. Women are treated as equals, people of color are not misrepresented or discriminated against.”

The three professors then meet Dr. Awesome and Professor Cool, performed by pianists Forrest G. Flesher ‘21 and Rachel Guo ‘22. They are misfit professors already on the island, which comes to life through “Highlights from Jurassic Park,” who are trying to find a mysterious artifact that will grant any academia-related wish. While the hall is suffused in disquieting red lighting and the orchestra begins the seething first measures of Gustav Holst’s “Mars: The Bringer of War,” the misfit professors reveal their evil plan to the audience. After engaging the trio in their quest, they aim to betray them and achieve academic world domination — which includes outlawing the Oxford comma. Simultaneously, tensions arise among the three protagonists as each is tempted to keep the artifact for themselves, leading them to split up.

The theme and setlist of each Pops concert are decided on collectively by the orchestra members.

“Usually, we’ll have a setlist and then we’ll frame a story around it,” said creative team leader Bryce C. Reynolds ‘24. “We usually have something that’s Harvard-related and doesn’t get talked about a lot amongst students.”

In this show, “we get to see that other side of the academia world,” said Reynolds. Clearly, this side would benefit just as much as the students would from less competitiveness and discrimination and more respect and friendship.

In the “Finale,” all hell breaks loose when the animals (read: orchestra members with fishtails and turkey masks) and professors run around Lowell Lecture Hall, engaging the audience in the thrill of the chase sequence.

Outrunning the animals, they get hold of the artifact and use their wish to return to Harvard. In front of ‘His Regal Harvardness,’ acted by David J. Peters ‘25, they explain that their ‘wicked awesome discovery’ is that they are really good friends. Instead of pursuing tenure at Harvard, they start their own university which will feature good TF payment, respect, and a student government email account with better password security.

According to Woo, the jokes of Pops concerts work because they’re accessible to all. Everyone “can understand them and they’re up to date. The UC election literally happened a couple days ago,” Woo said.

Spontaneity and surprises are an indispensable part of the Pops experience. “We get the script fully fleshed out and then send an email saying, ‘the script is ready for joke-insertion.’ The jokes happen right before the concert,” Reynolds said.

It’s not only the audience who gets surprised, either. “As much as we rehearse, we never actually fully run through the show with the full script and actors, so orchestra members are just as much immersed in the show experience as audience members. When we laugh at jokes, we’re genuinely laughing because we’ve never heard the jokes before,” Park said.

The plot of the silent film, the jokes, and the traditional dance piece at the end are all kept secret from the orchestra for as long as possible, resulting in a unique final product. “On stage, in the moment, everything just kind of magically comes together,” Park added.