‘Checkout 19’ Review: Why We Need Stories to Live 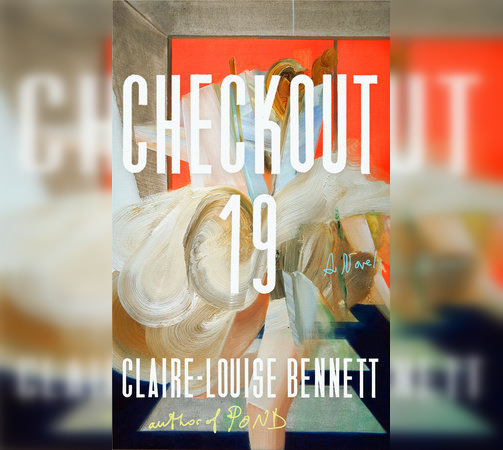 The cover of Bennett's "Checkout 19." By Courtesy of Riverhead Books
By Larissa G. Barth, Contributing Writer

“When everything is illuminated and the shadows have been sanitized, where goes the creature inside and what happens to her need for reverie?” writes Claire-Louise Bennett in her latest book. Part autofiction of a young writer, part philosophical encounter with humanity’s inherent and misconstrued darkness, and part subtle but raging feminist outcry, “Checkout 19” is nothing short of astounding. Bennett’s stream-of-consciousness prose draws the reader in like a maelstrom, taking one to the powerful “unmapped realm” of the writer’s vivid imagination in which she creates both her characters and her own identity. The novel masterfully shows us why we need stories to live and blurs the line between reality and imagination. Simultaneously, it illustrates the dangers of losing oneself in fantasy and protecting one’s intrinsic darkness at the expense of ignoring the darkness in the real world.

On the surface, “Checkout 19” is a coming-of-age novel about a young female writer in the English countryside. Told in retrospect, Bennett portrays the events, people — real and imagined — and books that have shaped and inspired her to live a life dedicated to reading and writing. Despite the straightforward premise, the novel defies constraints or easy classifications in every way. Bennett frees her prose from grammatical norms and limitations, and her narrator’s mind from fully formulated thoughts and conclusions. The realistically digressive thoughts of her unnamed narrator — who switches between “I,” “we,” and “she” — take the reader on an exhilarating ride through Florence, repressing classrooms, Tangier, and burning libraries in a work unbound by space and time.

The novel’s liberating formal aspects are intrinsically tied to its message of literature as a transcendental gateway into the deeper human consciousness and imagination. Throughout the book, the narrator reveals that this deep-seated part of the mind is a place that defies definition: She sometimes calls it “world soul,” sometimes an “alluring and unmapped realm,” but most often accepts that we can know nothing for sure about such a place. Philosophy aside, the most obvious reason for the elusive nature of the human mind and imagination is the fact that it is certainly different for every individual. A main characteristic of the inner mind for the novel’s protagonist is “darkness,” a term to which she attaches no negative meaning but rather sees it as an indispensable fountain of human creativity that should not be separated from “lightness.” Bennett’s musings here call to mind the recent psychological concept of “toxic positivity,” which views the suppression of emotions that traditionally carry negative associations, such as sadness or anger, as unhealthy and stifling.

As the narrator grows up and develops this undefinable sphere, her imagination increasingly serves as a perfectly private and secret place to escape the hurtful limitations of the real world. When the narrator muses, “I sometimes wonder if my inclination for abstruse ideas wasn’t in fact a form of passive-aggression,” she ascribes to her stories a nature of both surrealism and societal criticism. She feels trapped in the school and town she grows up in, where she is ridiculed for her unconventional thoughts. Even the London university where she later studies literature imposes a canon upon her and thereby confines her creative spirit.

Most distressfully, the violence and discrimination she faces because of her gender simultaneously almost quench and fuel her creative ingenuity. A book about electroconvulsive therapy that was used on women in her family rouses in her an “inherent anger that was ancient and bloodthirsty.” Isn’t it perfectly obvious, she thinks, that a culture in which women are “belittled, undermined, ignored,” and “misinterpreted on and on” makes them mad?

The narrator herself has to fight for her standing as a female writer, particularly with her romantic partners: “Women can’t withstand poetry, seemed to be Dale’s view… Poetry rips right through you, makes shit of you, and a man can be made shit of and go on living because no one really minds, not even the man.” It is then all the more satisfying when she realizes that, despite her misogynistic surroundings, beauty and weakness are not a woman’s defining characteristics, and that her irrepressible talent lacks no fierceness, wit, or resilience whatsoever. “Checkout 19” intersperses sharp but subtle observations of microaggressions and lets the protagonist grapple with them in an often unsatisfyingly internal way. Even after she becomes the victim of sexual violence, she uses literature and writing as a remedy instead of confronting the perpetrator. This does not take away from the novel’s feminism at all, but rather realistically illustrates the consequences of a culture of victim-blaming.

As the story moves on, the narrator slowly comes to terms with what she has tried to circumvent at all costs: reality. Thus far, Bennett has pulled the reader into the protagonist’s vivid imagination, praising stories as a sweet escape from the grim facts of existence. She easily could have ended the novel on this note. Instead, fitting with the novel’s refusal of black-or-white portrayals, the author holds the mirror up to both her protagonist and the reader by reminding us of reality’s challenges and darknesses. Startled, the reader realizes they have fallen for Bennett’s addicting prose just like the protagonist lives only through the literature she reads and writes. Merging with her creations, she is consumed by her literary work and loses her grip on reality, and the reader only recognizes this when it is almost too late. Bennett’s self-aware reflection shrewdly warns one of these dangers that inevitably accompany the benefits of storytelling.

Leaving many of its issues and questions unsolved, “Checkout 19” is a multi-layered and rewarding novel that will reverberate in the reader’s mind and nudge them to find their own way of balancing imagination and reality, lightness and darkness.